A Humanitarian Time Bomb in Idlib

As the latest regime offensive continues, hundreds of thousands of civilians are fleeing to overcrowded border camps, furthering Assad’s strategy of emptying as much of the Sunni Arab population as possible.

On May 6, Syrian regime forces launched a ground offensive against the rebel stronghold of Idlib. Thus far, the fighting is concentrated in two relatively small areas, and the regime’s territorial gains have been modest. Yet Bashar al-Assad and Russia ultimately aim to eliminate the rebel presence in the province once and for all (a desire shared by Iran, though its Shia militia proxies are not yet involved in this fight). Their long-term reconquest strategy is inspired by the seminal counterinsurgency methods of the late French officer David Galula, but with one important difference: they are not trying to win the hearts of Idlib’s population, they are trying to wring its neck.

Meanwhile, Turkey is not yet ready to abandon the field. It has reinforced its observation posts in the heart of the combat zone and provided more weapons to pro-Turkish rebel factions. Will such efforts help the rebels turn back the offensive, or will Ankara withdraw its support once Russia delivers its promised S-400 missile defense systems to Turkey? More important, what will happen to the hundreds of thousands of noncombatants in the province if the fighting turns into the type of protracted displacement campaign seen in Aleppo?

According to the Syrian Observatory for Human Rights, Assad’s army has lost more than 600 men since April 30—a significant tally given that thousands of wounded troops are out of action and defections have continued. This is especially true among the new “reconciled” conscripts hailing from former rebel areas. They have suffered the most casualties, which is not so concerning to the regime. Yet Assad’s fellow Alawites are paying a high price as well: more than eighty bodies came back to Latakia in May and probably the same number in Tartus, stirring anger against the regime.

The recapture of Qalaat al-Madiq has been the army’s only real success so far. In northwest Idlib, artillery and aviation are pounding Jabal Kabani, a mountain that has been fortified by leading jihadist group Hayat Tahrir al-Sham in order to protect Jisr al-Shughour and threaten the coastal region. Although successive assaults on the mountain have all ended in bloody failure, Moscow will likely keep up the pressure because it wants to extend the halo of protection around its coastal air base at Hmeimim, which is currently in range of rebel missile and drone attacks. 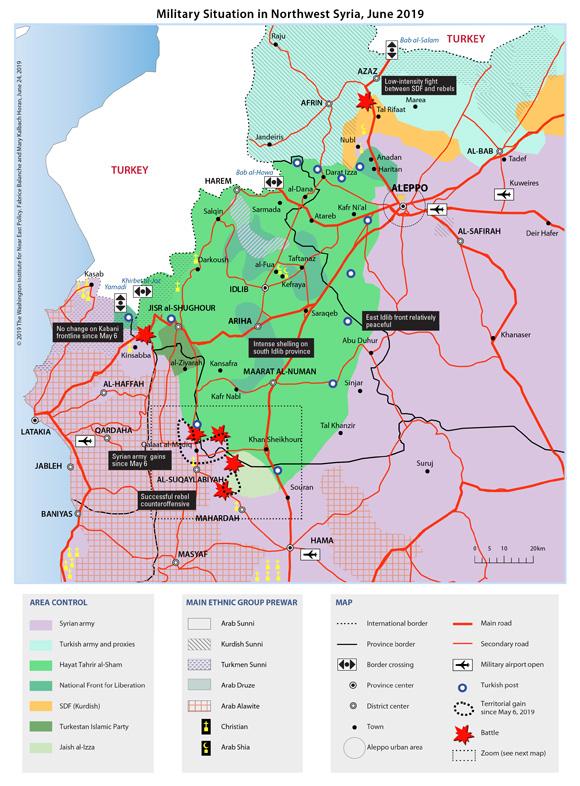 Losses are greater on the rebel side, with SOHR reporting more than 800 killed and thousands wounded. Such casualties cannot be supported indefinitely given that local hospitals are being systematically destroyed by aviation. For now, though, the calm on most other fronts is allowing the rebels to focus on southwest Idlib. The return of TOW missiles—which Turkey gave to its proxies Jaish al-Izza and the National Front for Liberation with U.S. permission—has blocked the advance of Syrian armored vehicles, even when they have air cover.

The rebels were also able to launch a successful counteroffensive on June 6, penetrating the army’s first lines of defense between Mahardah and al-Suqaylabiyah. The goal of this thrust is to encircle Mahardah and then threaten Hama, which could force the regime to pause its offensive and halt its massive bombing in other parts of the rebel enclave.

Around two-thirds of the province has been subjected to heavy airstrikes in recent weeks. Most of this bombardment occurs south of the Aleppo-Latakia highway, but Idlib city has been regularly hit as well. The targets are both military and civilian; the main objective is to spur civilians into fleeing for the Turkish border, thereby isolating rebel fighters in the south. The bombardment follows a clear pattern: the first wave of strikes typically focuses on military targets as a warning to civilians living nearby; the second wave consists of blind strikes throughout a given area, indicating that anyone within that perimeter will be targeted; the third wave is a complete deluge, since all who still remain in the area are considered to be rebels.

When Syrian and Russian forces bomb towns far from the frontline (e.g., Saraqeb, Kafr Nabl, Maarat al-Numan), they claim that the goal is to cut the insurgency’s logistical lines. In actuality, their aim is to prevent normal life in the rebel zone. Galula wrote that civilians will eventually reject an insurrection when it is unable to protect them, and Assad has seemingly counted on this principle for years now. In a civil war like Syria’s, most people ultimately rally to the faction that instills the most fear, not the one with the most righteous cause. This also explains why moderate rebels have largely been supplanted by the likes of Hayat Tahrir al-Sham.

On June 18, Mark Lowcock, head of the UN Office for the Coordination of Humanitarian Affairs (OCHA), presented an alarming report to the Security Council regarding the humanitarian situation in Idlib. Since May 1, around 330,000 people have fled their homes in the province, most of them piling up in the 342 informal camps established along the border with Turkey. They head to these already saturated camps because they believe they will safer there—which is true for now because the area has not yet been subjected to bombardment, and because international NGOs can access it from Turkey rather easily, resulting in an abundance of aid. This creates a paradox: NGOs and the UN are unintentionally promoting the Syrian-Russian strategy to empty south Idlib.

OCHA also notes that 250,000 children are out of school because their educational facilities are either destroyed or being used as homes for internally displaced persons (IDPs). Even when school facilities are available, many parents refuse to send their children there for fear of bombing. This year’s final exams have all been canceled—a deeply disheartening situation for a population that is very committed to education. The regime is quick to exploit such sentiment, repeatedly reminding Idlib families that they have two options: use the humanitarian corridors at Morek and Abu Duhur to shelter in government-controlled areas, or continue living amid chaos indefinitely.

To be effective in the long term, the regime’s brutal counterinsurgency strategy must destroy the possibility of opposition for decades to come—a goal that requires demographic reengineering. Hundreds of thousands of regime opponents have taken refuge in Idlib following rebel defeats in Homs, East Aleppo, East Ghouta, Deraa, Rastan, and elsewhere. Assad has made clear that he wants to drive all of them out of the country. Those with financial means have already left; for instance, the prominent Alloush clan quickly fled to Turkey and later moved to Saudi Arabia, the long-time patron of their rebel group Jaish al-Islam. The regime considers the hundreds of thousands of oppositionist IDPs as irreconcilable; worse yet, it seems to feel the same about a large part of Idlib’s native population, many of whom supported the rebellion.

Putting an exact number on this potential future exodus is difficult, but if the regime gets its way, Idlib may lose between one quarter and one half of its estimated 2.5 million residents. This prospect will likely convince some local communities to take the regime’s side, especially as the threat of collective punishment escalates. 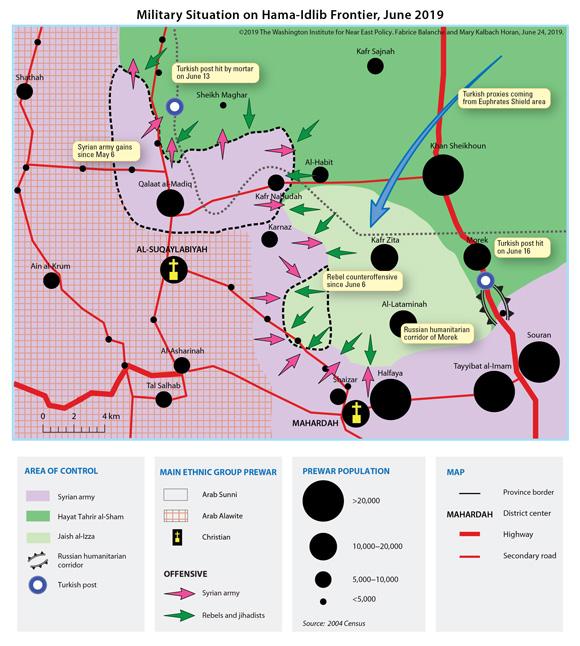 Some communities have more to fear from a regime victory than others, however. The frontline along the Hama-Idlib frontier represents not just a site of armed confrontation, but also a cleavage between sectarian communities. The Christian towns of Mahardah and Suqaylabiyah and the Alawite areas to the north and west have been hit hard by Sunni rebel fire over the past few years. Since May 6, some twenty civilians have been killed in Mahardah alone. Most loyalist populations do not want to rub shoulders with such enemies postwar; in their view, even disarmed former rebels pose an existential threat due to the strong demographic growth among Sunni Arabs.

For example, between 1970 and the most recent census year (2004), Christians decreased from 50 percent of Mahardah’s population to less than 20 percent, while Sunnis grew to more than 80 percent. The differential between Alawites and Sunnis is also very pronounced; from 1994 to 2004, population growth in the Sunni district of Maarat al-Numan was 4 percent per year, compared to only 1.4 percent in the neighboring Alawite district of Masyaf. The regime therefore aims to alter the area’s demographics for the benefit of Alawites, as well as local Ismaili Muslims and Christians, who have remained largely loyal during the war.

DISPLACED PERSONS ARE A TIME BOMB

Various pressures have so far prevented the regime and its allies from launching a full-scale ground invasion of Idlib, yet their current strategy may be sufficient to destroy the rebel stronghold and displace its population if left unchecked. In the absence of additional shelter facilities, many IDPs have camped in local olive groves, but this arrangement will likely become unbearable as winter approaches and more IDPs arrive at the border. The precedent set in East Aleppo is ominous—the Syrian army bombed the area for three years before storming it, thereby reducing the number of civilians from 1.5 million to less than 100,000 on the eve of the ground offensive. Damascus and Moscow seem intent on applying the same strategy to Idlib, and the humanitarian time bomb they have set is ticking away.

Fabrice Balanche is an assistant professor and research director at the University of Lyon 2, and author of Sectarianism in Syria’s Civil War: A Geopolitical Study.