Ceasefire and Elections in Syria: Putin Still a Step Ahead

If Moscow and Damascus have their way, the latest ceasefire will further divide the rebels, isolate Turkey, and facilitate their ongoing military and political strategy for preserving Assad's rule.

Read the French-language reprint of this PolicyWatch on the Liberation website.

On February 22, U.S. and Russian officials announced a ceasefire in Syria, with the Assad regime declaring shortly thereafter that parliamentary elections will be held on April 13. Neither development offers much cause for optimism. In fact, Moscow and Damascus are complying with the UN peace plan laid out in Security Council Resolution 2254 only under their own conditions, and only temporarily. Thus far, President Vladimir Putin is still one step ahead of Washington and its partners in the ongoing Syrian chess game.

One of the reasons why Russia has accepted a ceasefire is simply the need for a break after the major offensive conducted over the past few weeks, in which the Syrian army and its allies won numerous territorial gains under Russian air support. The army must now create defensive lines before launching new attacks. A ceasefire is also a welcome means of preventing rebel counteroffensives.

Yet the announcement's main benefit for Russia is perhaps psychological: namely, to let the implications of its latest hard-power demonstration sink in among those backing the rebellion, especially Turkey. Moscow's message to Ankara is clear: "If you do not withdraw your support from the opposition and close your border, we will do it ourselves with the help of the Syrian Kurds, sending you an additional two million refugees in the process" (see PolicyWatch 2557, "The Worst of the Syrian Refugee Crisis Is Coming for Europe").

Despite recent fiery statements from Turkish president Recep Tayyip Erdogan, Putin seems to believe that Ankara will have a difficult time mustering the political will to actually send forces into Syria. He also realizes that Turkish-backed rebel groups are not strong enough on their own to stop Syrian army advances supported by heavy Russian bombardment. Meanwhile, Washington has no desire to support a Turkish intervention, and Saudi Arabia is too busy in Yemen to help significantly.

Turkey's own actions thus far have been problematic as well. It has launched a few artillery shells into Syria's Azaz corridor, targeting the Syrian Kurdish Democratic Union Party (PYD) and its armed wing, the People's Defense Units (YPG). Not only was this move insufficient to prevent the Kurds from advancing there, it also pushed them further into the arms of Moscow -- the very thing Washington fears the most. Turkey also formally permitted hundreds of rebels from Syria's Idlib province to cross its territory and defend Azaz against the YPG. This is something Ankara never allowed even against Islamic State (IS) advances, so the move's main result was to expose the ambiguity of Turkish policy in Syria.

In response, Putin has sought to cast himself as the "protector" of the Syrian Kurds. On February 20, Russia presented a draft resolution to the UN Security Council denouncing the Turkish bombardment of Kurdish villages in Syria. While the proposal was rejected by the West, its symbolic weight was clear. And now that the U.S.-Russian ceasefire has been announced, Ankara could be liable for breaking it if Turkish-backed militias proceed to attack the YPG and its Kurdish/Arab allies in the Democratic Forces of Syria (DFS), or if Turkey itself bombs the Kurds again.

Putin stated that he is committed to pressuring Damascus on respecting the ceasefire, and he called on President Obama to do the same with America's regional allies. Yet the rebellion's main supporters, Turkey and Saudi Arabia, are adamant that Bashar al-Assad must step down, and a ceasefire essentially means keeping him in power indefinitely. Even if outside powers agree to the proposal, it will be difficult to convince all rebel groups to respect it; in fact, most of them likely see Washington's agreement with Moscow as a betrayal. Internal divisions within the opposition are a further obstacle to implementing a ceasefire, further undermining the credibility of the United States. In contrast, Moscow's allies tend to speak with one voice and respect discipline.

Another major difficulty is that the ceasefire agreement excludes the rebel group Jabhat al-Nusra, an al-Qaeda affiliate that both Washington and Moscow regard as a terrorist organization. The potent group is present on all Syrian fronts from Deraa to Aleppo; it also controls the city of Idlib and holds sway over other rebel factions in that province. In light of this situation, how can Ahrar al-Sham and other close rebel allies of Jabhat al-Nusra be expected to respect a ceasefire if Russian aircraft continue hitting the group's forces? Especially if these allies are themselves targeted under the pretext that they are harboring al-Nusra fighters? Certainly the opposition would benefit in the long run by dissociating itself from an al-Qaeda branch, but in the current context this will only further divide the rebels and perhaps lead them to a fratricidal war -- a scenario that has no doubt crossed Putin's mind.

POTENTIAL OFFENSIVE AGAINST THE ISLAMIC STATE?

After the victorious offensive around Aleppo, Russian and the Syrian forces could turn against IS elements east of the city. Such a move would have the military advantage of consolidating the defense of Aleppo, expanding the city's security perimeter, and securing the only supply road between Aleppo and the rest of the regime-controlled zone. That road has been regularly closed by IS raids, most recently on February 20. 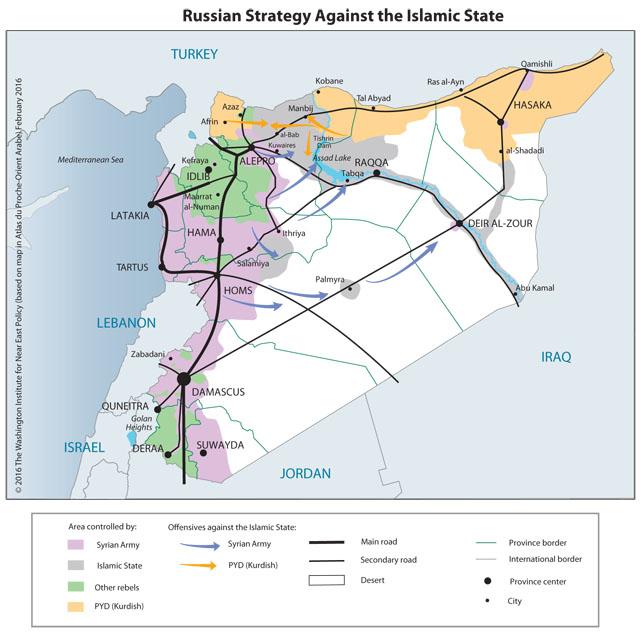 The army could also launch a joint offensive against IS forces in cooperation with the DFS: for example, regime forces in Kuwaires (on the Aleppo-Raqqa road) and Ithriya (on Salamiya-Raqqa road) could advance northeast while DFS forces advance south from Tishrin Dam. Such a move would likely have several consequences. First, it could eliminate the IS presence on the southern shore of Assad Lake and allow the army to retake Tabqa air base, lost in November 2013; IS forces between Aleppo and the Euphrates River would then be separated from their "capital" in Raqqa. Second, the DFS would be free to launch offensives between Afrin and Kobane in order to join the two Kurdish cantons in the north. Third, by retaking Tabqa, the army would be well positioned to advance on Raqqa, whose fall would legitimize Assad for a new presidential term and justify the Russian intervention "against terrorism" in Syria.

Yet Raqqa does not seem to be the goal in the coming months. The priority on the eastern front seems to be reopening the road between Deir al-Zour and Damascus by retaking Palmyra from IS. Implementing the ceasefire would help that plan because it would guarantee relative tranquility for the Syrian army on the western front.

ELECTIONS ARE ICING ON THE CAKE

Assad's call for new parliamentary elections in April is consistent with the constitution, but the fact that it comes a month ahead of the official schedule suggests that it is related to the ceasefire announcement. In moving the timetable up, Assad likely intends to coopt the Syrian opposition by taking over the process of "political transition" defined in unfortunately vague terms by Security Council Resolution 2254.

As for the elections themselves, they will be held in the usual draconian manner. Although the Baath Party is technically no longer the ruling faction per the 2012 constitution, the electoral modalities and results will be predictable. Russian-sponsored opposition factions will likely participate in the ballot, while Saudi-supported factions will no doubt refuse.

The big unknown is whether the PYD will take part. In 2014, the Kurdish party barred presidential voting from taking place on its territory, but it could ease this prohibition for the parliamentary elections. Yet Damascus might block the PYD's participation for another reason: because the party is present in only three Syrian provinces, it does not meet the constitutional criteria for joining parliament. Then again, it is in Assad's interest to open national representation to the Kurds in order to boost his legitimacy, so he may attempt to build a "national unity government" with them that meets the vague UN transition requirements.

After five years of war, a humanitarian disaster, and the creation of a jihadist stronghold at the gates of Europe, Western leaders face a choice: accept what Moscow is offering (with all of the potential drawbacks described above), or hold fast to the increasingly difficult goal of a transition predicated on Assad's departure. They are rightfully concerned about domestic terrorist threats and the continued flow of refugees, yet if they accept the ceasefire's apparent implications, then Turkey -- perhaps the opposition's most important backer -- will find itself isolated and forced to limit its support to the rebels. In that sense, the millions of refugees generated by the conflict remain Putin's best lever for compelling Assad's enemies to cease hostilities.