The U.S. Strike in Deir al-Zour: Implications on the Ground

The episode gives Moscow a great excuse to be uncooperative, which it may have planned to be anyway, but providing clearer information could nevertheless help further the coalition's goals.

On September 17, planes from the U.S.-led coalition in Syria attacked a target inside the city of Deir al-Zour, triggering an outcry from Bashar al-Assad's regime and Russia while raising questions about the strike's goals and consequences. Damascus and Moscow have claimed that the location was a fixed Syrian army position in the southern part of the city, and that 60-90 Syrian soldiers were killed and about a hundred injured. U.S. officials have publicly expressed regret for the strike, confirmed that regime forces were killed, and explained that they were mistaken for Islamic State (IS) personnel. Yet the lack of full, clear details from Washington has resulted in an odd, cloudy picture of the incident, allowing Russia and the Assad regime to dominate the narrative with inflammatory suggestions about U.S. intentions.

The position in question is Jabal Turdah (aka Thudar), a series of hills that are key to defending the airport (four kilometers north) and the regime-controlled portion of the city as a whole. This is a desert region with no buildings for miles nearby. The regime zone has been completely encircled by IS since May 2015, when the group conquered the western road to Palmyra. The airport is therefore the only means of supplying the city -- if it were lost, Deir al-Zour could become the Syrian Dien Bien Phu. 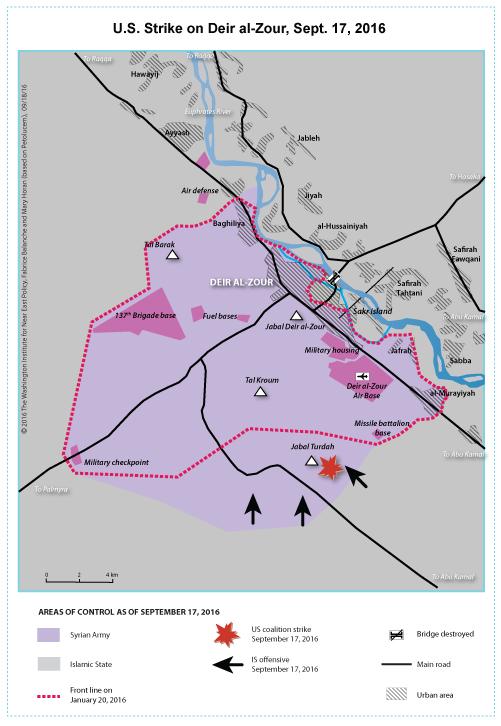 On Saturday, various Arabic media reported that a fierce battle took place between the Syrian army and IS forces that were trying to seize Jabal Turdah from the south. The coalition strike took place that same day, and although U.S. military accounts are unclear about whether the Syrian forces were regular army personnel or irregulars, the result was unmistakable: the regime contingent withdrew from the position after the strike, which allowed IS to seize it. To be sure, the victory was only temporary, since the army retook Jabal Turdah the next day thanks to huge reinforcements from Damascus and intense regime and Russian airstrikes. But the incident nevertheless highlighted the fragility of Assad's position in Deir al-Zour -- and of the recent U.S. "cessation of hostilities" deal with Russia, which may be unraveling amid reports of renewed regime bombing in the Aleppo area.

According to the U.S. Central Command (CENTCOM) statement issued after the operation, "Coalition forces believed they were striking [an IS] fighting position that they had been tracking for a significant amount of time before the strike." But the statement raises several questions. For one, how did the coalition mistakenly bomb a fixed position of the Syrian army? Jabal Turdah has been continuously occupied by the army with the exception of January-March 2016, when IS briefly seized it. CENTCOM also stated that "the location of the strike is in an area the coalition has struck in the past," but its past statements make it difficult to confirm this. For some months -- including in recent weeks -- the coalition has officially announced a number of strikes "near Deir al-Zour," but exact locations have generally not been given. More important, the coalition has never intervened in the regime vs. IS battle for Deir al-Zour before, so why would it begin to do so this weekend?

Intelligence failures, human error, and/or false information from allied forces are among the many possible explanations, since the U.S. military and other armed forces have of course made similar targeting mistakes for such reasons before (e.g., the U.S. bombing of the Chinese embassy in Belgrade in 1999; the bombing of a hospital in Kunduz, Afghanistan, in October 2015). Whatever the case, the incident came mere days after the start of the U.S.-Russian ceasefire deal, and both signatories are now accusing each other of not respecting the agreement's terms.

Whether the United States takes new steps to preserve the deal or otherwise reassure Moscow and Damascus, it should understand the consequences of doing nothing. In the immediate term, the regime and Russia would likely continue characterizing the strike as an intentional U.S. effort to give Deir al-Zour to IS. More broadly, if the agreement lapses, the coalition would be left without a mechanism for separating moderate rebels from radical groups, and Russia would have little incentive to prevent Assad from blocking humanitarian aid to besieged areas. Indeed, the episode gives the Kremlin a great excuse to be uncooperative, which it may have planned to be anyway. If that is Russia's aim, confidence-building measures may not make much difference, but if the United States provides more information about the incident, that would show the world that Washington is trying to live up to its end of the bargain.