Syria's Spillover: Will Israel Be Drawn In?

by Jeffrey White, David Schenker
About the Authors

Jeffrey White
Jeffrey White is an adjunct defense fellow at The Washington Institute, specializing in the military and security affairs of the Levant and Iran.

David Schenker
David Schenker is the Taube Senior Fellow at The Washington Institute and former Assistant Secretary of State for Near Eastern Affairs.

The complexities and dynamics of the Syrian conflict make it distinctly possible that Israel could become militarily involved -- even though none of the actors are interested in that outcome.

"The most likely cause for escalation would come out of an Israeli strike against an arms shipment to Hezbollah." -White

"The heightened tension is not going to diminish as long as we have this war going on next door." - Schenker

Amid reports of another Israeli strike in Syria, Jeffrey White and David Schenker address the complexities and dynamics of the Syrian conflict that make it distinctly possible that Israel could become militarily involved -- even though none of the actors are interested in that outcome.

In the latest Institute FAQ video briefing, White, the Institute's defense fellow, and Schenker, its Aufzien fellow and director of the Program on Arab Politics, explore Israel's red lines, Hezbollah's motives, and Washington's policy options to minimize the risks of spillover from Syria to Israel.

Watch the Institute's Policy Forum discussion on "Geneva II and the Road Ahead." 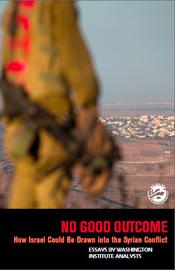 No Good Outcome:
How Israel Could Be Drawn into the Syrian Conflict

In this study, seven Washington Institute experts address the issue of Syrian spillover to Israel from all angles, assessing how Iran, Hezbollah, jihadist groups, and other actors might instigate or respond to Israeli involvement during the war or afterward. Read more.