The Islamic State Threat in the Golan Heights

Using both carrots and sticks, Israel has so far managed to prevent attacks against the Golan, but the danger is growing as jihadist movements increase their presence in southwestern Syria amid setbacks on other fronts.

Israeli military forces in the Golan Heights have been in a state of permanent alert for some time, with one officer recently telling the author that the situation on the other side of the ceasefire line has become "incomprehensible and threatening." Ever since large contingents of the UN Disengagement Observer Force (UNDOF) withdrew from the demilitarized zone separating the Israeli and Syrian portions of the Golan, various radical groups have taken over much of the area, including the Islamic State (IS) and al-Qaeda affiliate Jabhat al-Nusra (JN). And while Druze villages in the area remain under the Assad regime's control, Hezbollah has repeatedly tried to establish its own foothold there. These developments have exacerbated concerns about a potential jihadist or Hezbollah attack on the western side of the Golan, since destroying Israel remains the mobilizing utopia of all of these movements.

ASSAD HAS LOST MOST OF THE GOLAN

On the Syrian side of the Golan ceasefire line, all of the regime's armored divisions have gradually been withdrawn in order to fight rebels in the Damascus, Aleppo, and Homs areas. Bashar al-Assad has not been troubled about making such redeployments because he knows that Israel will not invade. Yet his army has also lost a large swath of territory along the Jordanian border between the Golan and Jabal al-Druze, leaving only one regime contingent that holds half of Deraa city and the road to Damascus. 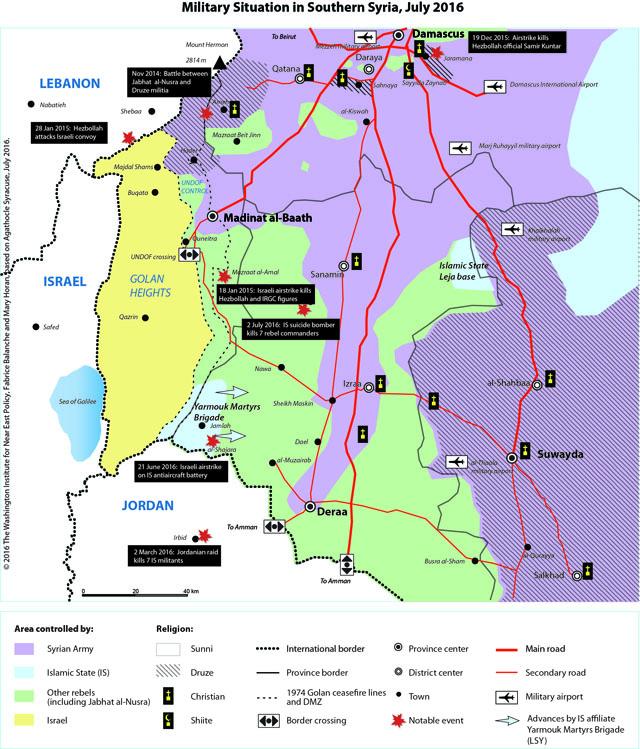 According to the Israel Defense Forces (IDF), about 150 independent rebel groups are now present in southern Syria. Some of these groups have united under the "Southern Front" umbrella, reportedly with substantial support from a U.S.-backed military operations center in Jordan (MOC Amman). Yet this alliance is only temporary and intended for specific, limited purposes. Thus while JN has no more than 1,500 fighters in the area, and IS less than a thousand, they are enough to play a substantial role inside a very fragmented southern rebellion.

Moreover, MOC Amman seems to have frozen its offensive plans against Deraa and Damascus in recent months, partly because of the Russian intervention in Syria that began last fall, and also because Jordan is straining under the weight of refugees and does not want to encourage heavy fighting that spurs more Syrians to flee across the border. For its part, Russia has not conducted airstrikes in the Golan apart from a brief spate of bombing, respecting President Vladimir Putin's understanding with Israeli prime minister Binyamin Netanyahu.

Jihadist groups have been quick to exploit this stalemate, whether by extracting allegiance through force or playing on the sense of betrayal that some local factions feel toward their Western and Arab allies. JN has strengthened its presence in the south and become the dominant player there, just like it did in Idlib province. Its only real competition comes from IS, which exerts local influence through its affiliate, the Yarmouk Martyrs Brigade (Liwa Shuhada Yarmouk, or LSY). This is the group that most concerns IDF officials, some of whom believe that LSY could attack Israel with unconventional means such as chemical weapons or suicide attacks.

LSY was founded in summer 2012 by a local chief of the Yarmouk Valley, Mohammed al-Baridi. Since his death in November 2015, the group has been led by Abu Obeida Qahtan, a Palestinian Syrian from Damascus and a veteran of conflicts in Chechnya, Iraq, and Afghanistan, where he was close to Osama bin Laden. The group became famous in March 2013 when it kidnapped a group of UNDOF soldiers, later releasing them after extracting ransom from Qatar. Despite this incident, LSY continued to receive military support from MOC Amman until summer 2014, when it became clear that the group had pledged allegiance to IS, according to the Emirati daily the National.

This May, LSY joined together with the Muthanna Islamic Movement and Jaish al-Jihad to create the Army of Khaled ibn al-Walid. From a defined territory protected by the Yarmouk Valley and the Golan ceasefire line, this umbrella group has launched attacks against other rebel factions in the direction of Deraa and Quneitra, including suicide bombings. On July 2, for example, a suicide attack in Inkhil killed 7 Southern Front commanders.

Meanwhile, JN controls the southern areas between IS and the Syrian army, including the ruins of Quneitra city. JN forces in the south first made their presence known in early 2012, launching attacks against Jabal al-Druze. Since then, the group has increased its grip on the rebellion as a whole, cooperating with Ahrar al-Sham to unite various factions on the model of the Jaish al-Fatah (Army of Conquest) coalition in the northwest. But JN was unable to replicate its Idlib successes in the south because MOC Amman actively tried to keep the group away from the Southern Front coalition.

Since last fall, MOC Amman's priority has been the campaign against IS. Yet fighters supported by the MOC have not been very efficient in that regard, partly because they would prefer to battle the Assad regime, but also, ironically, because their MOC-supplied livelihood depends on a perpetual anti-IS campaign. Thus JN is the only southern player with a genuine interest in eliminating IS, its direct ideological and military competitor.

As in the rest of Syria, Hezbollah is present in the south alongside regime forces. But its proximity to the Golan has special importance because Iran wants to maintain its monopoly on "resistance" against Israel. Indeed, Israel fears that if Hezbollah establishes an active front in southern Syria, it could regain its "resistance" legitimacy at home and in the wider Arab world while containing any escalation in southern Lebanon, where its Shiite constituencies were struck hard during the 2006 war.

To support this apparent Golan policy, Hezbollah sent two prominent operatives to the area: Samir Kuntar and Jihad Mughniyah. The group believed Kuntar's Druze origins would be an asset for recruiting fighters in the Druze villages around Mount Hermon. Yet he was killed on December 19, 2015, by an airstrike on his home in Jaramana, a Druze-Christian suburb of Damascus. Mughniyah is dead as well -- on January 18, a missile strike on Mazraat al-Amal, close to Quneitra, killed him and five others, including Gen. Mohammad Ali Allahdadi, a commander in Iran's Islamic Revolutionary Guard Corps. Since these targeted strikes, Tehran and Hezbollah have seemingly paused their efforts to move into the Golan, but the threat remains, spurring Israel to demand UNDOF's full return to the demilitarized zone.

Despite these threats, Israel has no intention of invading the DMZ. For now, it is content to launch strikes against individual targets when necessary -- for example, when sophisticated equipment falls into dangerous hands. On June 21, it destroyed an antiaircraft missile battery that IS had seized in the LSY stronghold of al-Shajara. Israel has also announced that it will protect the Druze villages in the Hermon area (Hader and Arneh) against any rebel attacks. Arneh was already victimized by JN attacks in November 2014. Protecting these villages benefits Israel in two ways: it gives the Druze an alternative to Hezbollah, and it attracts the sympathies of Druze in the Israeli-controlled portion of the Golan, who are deeply concerned about the fate of their coreligionists on the other side of the ceasefire line.

Israel has also been treating injured Syrians in its hospitals, both for humanitarian reasons and to prevent escalation with the jihadists. For many populations isolated by the fighting and lacking medical infrastructure of their own, such treatment is the only recourse, so the rebels have no interest in hitting Israel. For one thing, the border would immediately close and the population would blame them; in addition, rebel fighters sometimes need Israeli treatment themselves.

As mentioned above, Jordan is deeply concerned about the influx of Syrian refugees, and the specter of spillover via terrorist attacks inside the kingdom is no less worrisome. In March, authorities dismantled IS cells in Irbid; two months later, Jordanian soldiers were killed by a suicide bomber on the border with Iraq. In this context, IS views LSY as a base for attacks against Jordan

Yet attacking Israel would have extra value for IS, particularly given its recent setbacks elsewhere. History shows that hitting Israel or otherwise showing support for the Palestinian cause is a frequent recourse for Arab despots on the ropes. For example, when Saddam Hussein was under attack by the international coalition in 1991, he tried to mobilize the Arab world in his favor by launching missiles on Israel. For now, the area controlled by the Islamic State's southern branch is cut off from the rest of IS territory, but linking them is not unattainable. IS already has cells on the outskirts of Damascus and a logistics base in Leja (north of Suwayda) that are in constant communication with the group's "capital" of Raqqa.

Using both carrots and sticks, Israel has so far managed to prevent attacks against the Golan, but the rise of jihadist movements in southwestern Syria is steadily increasing the danger level. These movements are unlikely to remain close to Israel indefinitely without attempting some action that enshrines them as the true defenders of Islam -- especially IS, which is losing on all other fronts.