Conflict in Syria: Geneva II and the Road Ahead

Andrew J. Tabler
Andrew J. Tabler is the Martin J. Gross fellow in the Program on Arab Politics at The Washington Institute, where he focuses on Syria and U.S. policy in the Levant.

Jeffrey White
Jeffrey White was an adjunct defense fellow at The Washington Institute, specializing in the military and security affairs of the Levant and Iran.

On January 27, 2014, Andrew Tabler, Jeffrey White, and Aaron Zelin addressed a Policy Forum at The Washington Institute. Tabler is a senior fellow in the Institute's Program on Arab Politics and author of In the Lion's Den: An Eyewitness Account of Washington's Battle with Syria. White is a Defense Fellow at the Institute and a former senior defense intelligence officer. Zelin is the Institute's Richard Borow Fellow and founder of the website Jihadology.net. The following is a rapporteur's summary of their remarks.

Last week's talks in Montreux were a tactical diplomatic victory for the Syrian opposition. While the regime's foreign minister Walid Mouallem had a tense exchange with UN secretary-general Ban Ki-moon, forcing the regime delegation to take a more conciliatory tone ahead of subsequent talks in Geneva, the opposition's tone was much more measured. Early signs show that the talks have also restored some credibility to the United States and the UN.

In terms of content, the regime focused overwhelmingly on its fight against "terrorism." Opposition leader Ahmed Jarba similarly addressed the "slaughter" and other atrocities occurring in his country, but he blamed the regime for the creation of the Islamic State of Iraq and al-Sham (ISIS), a major al-Qaeda affiliate in Syria.

In Geneva, the parties have attempted to address the humanitarian situation in Homs, one of the hardest hit, most besieged areas. The opposition Syrian National Coalition has better relationships with armed groups in that area, and the militias themselves have better command-and-control there. The regime has agreed to allow humanitarian deliveries, which are enshrined under international humanitarian law, but only if armed fighters depart assisted areas. In terms of evacuating Syrians from besieged areas, the regime has agreed to let women and children exit but is demanding that all male evacuees give their names before leaving -- a nonstarter for all other parties.

The talks have reached an impasse on the issue of transferring power to a transitional government. The regime's negotiating team reportedly presented a "declaration of principles" that did not mention a power transfer, and the opposition summarily rejected it. The regime's untenable position at Geneva is essentially a forced settlement masquerading as a democratic process. President Bashar al-Assad maintains that the political mechanism for settling the crisis centers on this spring's presidential "election." Following the February 2012 constitutional referendum, presidential elections in Syria must now be multicandidate, multiparty contests. Yet candidates must still be approved by the Assad-appointed Supreme Constitutional Court. This fact, coupled with other manipulations, mean that Assad will assuredly win.

Regarding the controversy over Iran's attendance at the talks, the United States has wisely insisted that Tehran cannot participate until it accepts a central tenet of the 2012 Geneva Communique: the formation of a "transitional governing body" (TGB) with "full executive powers" that will create a "neutral environment in which a transition can take place." Yet Assad has rendered this provision meaningless by insisting that the TGB be formed "on the basis of mutual consent." This loophole has allowed Russia to permit Assad's inclusion in the TGB while claiming to remain committed to the communique. Assad is also unwilling to work with the Syrian National Coalition and other opposition groups, which he dismisses as proxies of regional and Western states. Moreover, anything decided during the Geneva process would need to be confirmed by a national referendum administered by the regime.

Going forward, the opposition and its international supporters should pursue a three-part strategy. First, they should focus on a transition that involves the departure of the regime's core, including members of the Assad and Makhlouf families (who have privileged relationships with the elite 4th Armored Division) and the shabbiha militias. Second, they should avoid a forced settlement centered on the reelection of Assad, whose term expires on July 7. And third, they should prevent the regime from dragging its feet on implementation of the chemical weapons deal. Assad knows his usefulness to Russia and the United States will significantly diminish after he turns over all of those weapons, so he will attempt to tie any progress in Geneva to the chemical schedule. 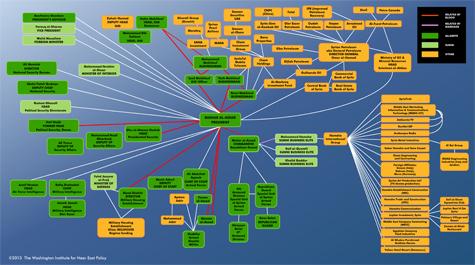 Download Tabler's Who's Who in the Assad Regime chart (PDF).

The ongoing negotiations are another front in the struggle between the regime and the opposition. In the end, though, military events will have a much bigger impact on the conflict's course than the Geneva process.

After the talks, the war will likely go back to business as usual: a triangular conflict characterized by unfinished operations and a battlefield situation that favors the regime, albeit not decisively. Casualties will increase, including among foreign fighters and irregulars on both sides. And the rebels may lose ground in important areas such as Homs, the southern suburbs of Damascus, and the southern approaches to Aleppo.

Currently, the opposition is undergoing two contradictory internal processes -- in some cases rebel factions are fighting each other, while in other cases they have sought to consolidate their forces against the regime. It remains unclear which process will prevail. Either way, the regime does not feel militarily threatened enough to treat the current talks seriously. Knowing that it will continue to benefit from inter-rebel fighting, the regime prefers a slow victory or stalemate over negotiations. The regime also sees no connection between the opposition delegation in Geneva and the armed rebels on the ground. For their part, the rebels have little bargaining power other than threatening to continue the fight.

There are four potential scenarios for how the conflict will unfold after Geneva, listed in descending order of probability, with the first two being equally likely:

To be sure, the creation of the Islamic Front umbrella group has improved the opposition's use of military resources. Yet the regime still holds the advantage in linking political and diplomatic strategy to military operations, and its position will likely improve in the short term. To remain effective, the rebels will have to resolve their internal divisions, limit their loss of territorial and strategic positions, better coordinate their use of military resources, and prevent the regime from exploiting mistrust among their ranks.

Despite reluctance in U.S. policymaking circles, tipping the military balance in the rebels' favor would require increased military assistance beyond guns and ammunition. Intelligence sharing, medical assistance, and battlefield expertise could also help the more moderate rebel factions in their fight against the al-Qaeda affiliate ISIS. At the same time, the international community could move negotiations forward by putting diplomatic and economic pressure on the regime's indispensable allies, Hezbollah, Iran, and Russia. This includes exposing the details of their financial and military support to the regime. Such an approach would test the willingness of these allies to up the ante. In any case, the current military situation in Syria means that Geneva is not where one should look to size up the country's future.

The Islamic Front's number-one goal is toppling the Assad regime, including its military and security institutions. Accordingly, six of the seven rebel groups within the IF signed a joint statement in late October that declared settlement talks a "conspiracy" and warned that any rebel participants would be tried for treason. And on January 20, the IF and Jaish al-Mujahedin issued a joint statement further rejecting the Geneva process.

Even so, some have argued that the United States and the West should back the IF because it is fighting ISIS. Yet it would be imprudent for Washington to work with the IF given its actions and statements thus far. For example, Hassan Aboud -- the head of the IF's political bureau and leader of its most extremist faction, Ahrar al-Sham -- has said that there is no contradiction between the interests of the United States and Iran. More important, an August Human Rights Watch report concluded that the hostage taking, killings, and other systemic abuses committed by rebel forces against civilians in the Latakia area "rise to the level of war crimes and crimes against humanity." The organization specifically implicated Ahrar al-Sham as a major player in these abuses. In addition, Zahran Aloush, the IF's military commander and head of Jaish al-Islam, has said that "the mujahedin...will wash the filth of the Rafida [derogatory term for Shiites] from the Levant, they will wash it forever." If the United States backs the IF and the regime is defeated, certain rebel factions could launch a campaign of genocide against Assad's Alawite Shiite constituents.

The group's core ideology also pits it against U.S. interests. The IF's charter calls for an Islamic state and the implementation of sharia -- the group is squarely against human legislation, believing that all laws come from God rather than civil government. IF leader Abu Issa al-Sheikh has stated that there is no place for secularism in Syria, while Aloush has ruled out democracy as an acceptable form of government.

The IF presents a military liability for Washington as well. Its role in fighting ISIS has overshadowed the fact that it hosts foreign fighters from the Netherlands, Turkey, Egypt, Kuwait, Russia, and Uzbekistan, among other countries. Even more alarming is the connection between senior Ahrar al-Sham figure Abu Khalid al-Suri and al-Qaeda leader Ayman al-Zawahiri. As Zawahiri's emissary in Syria, Suri has been a mediator in dealings between ISIS and Jabhat al-Nusra (JN), another al-Qaeda affiliate.

The ongoing fighting between IF units and ISIS is a lot more complex than commonly reported. While IF groups have been portrayed as fighting jihadists, they are in reality responding to specific abuses perpetrated by ISIS. Many within the jihadist camp have framed the IF-ISIS clashes as mere fitna (discord) to be resolved through mediation, potentially with JN as a broker. Meanwhile, ISIS has branded the opposition Syrian Military Council and its civilian arm as its real enemy, declaring that its war is not against the IF, but rather against Jamal Marouf, the leader of the nationalist Syrian Revolutionary Front (SRF).

ISIS has also been able to recover from the recent surprise offensive by the SRF, Jaish al-Mujahedin, and the IF, in part because some IF battalions have refused to fight the group. Additionally, the two sides have signed several agreements, including one handing the city of Saraqeb over to JN and the SRF. As a result, ISIS has not only recaptured its lost clout, it has also retaken Jarabulus, Manbij, and al-Bab. In addition, it has secured pledges of loyalty from a number of tribes and former IF battalions since the fighting started.

Yet even as Ahrar al-Sham has toned down its clashes with ISIS, other IF groups are less keen on mending relations. Jaish al-Islam leader Aloush has consistently been anti-ISIS, calling it an agent of the Iranian government. Liwa al-Tawhid and Suqur al-Sham have made similar calls for finishing the job against ISIS. Thus, more inter-rebel fighting should be expected, though ISIS will remain a player whether it is ostracized or not.

This rapporteur's summary was prepared by Adam Heffez.