The regime's latest atrocity was spurred by clear military motivations, and the situation will likely worsen as the army begins a wider ground campaign against rebel strongholds in Idlib province.

In claiming that the Syrian army was not responsible for the April 4 chemical attack on Khan Sheikhoun, Russia has argued that the Assad regime had no military reason to use such weapons. Quite the contrary: the regime faced a critical defeat on that front and felt it had no other way to avoid a major setback. Indeed, the Khan Sheikhoun attack was likely the first step in a large-scale offensive against Idlib province, the main bastion of the rebellion. Given the increasingly extremist flavor of Idlib's rebel groups and the regime's ongoing manpower shortages, the upcoming campaign may see an uptick in brutal, indiscriminate tactics that flout international law, with potentially devastating consequences for local civilian populations.

REBUILDING THE IDLIB REBELLION FOR AL-QAEDA

Currently, rebel forces in Idlib province number more than 50,000 fighters, most of them hardcore jihadists and Islamists. The few thousand remaining "moderates" have largely concentrated themselves on the Turkish border to avoid being eliminated by al-Qaeda affiliate Hayat Tahrir al-Sham (HTS), formerly known as Jabhat Fatah al-Sham. Since 2014, the Syrian branch of al-Qaeda has systematically eliminated rebel militias that refuse to pledge allegiance to it. One such purge took place after the January 2017 Astana peace conference, where the group accused other factions of collaborating with Russia. That accusation was not entirely unfounded, since Moscow has sought to divide the rebellion ahead of the impending assault on Idlib. 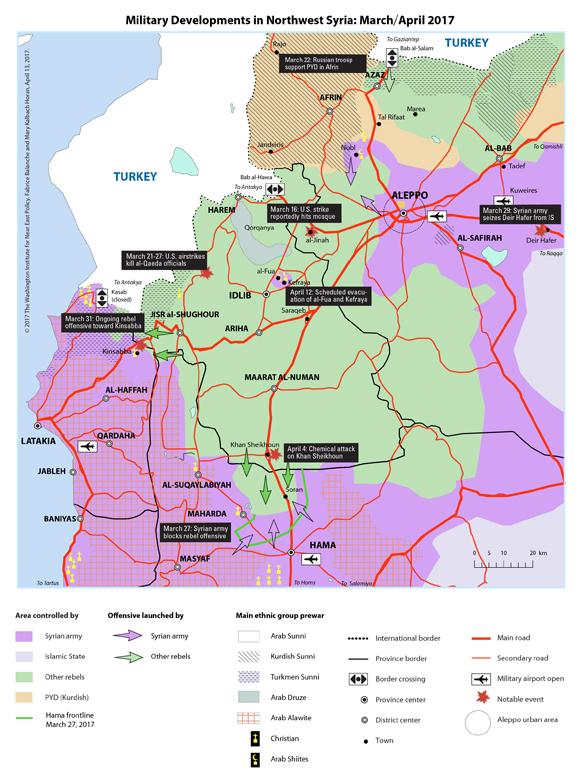 The fall of East Aleppo accelerated the rebel reorganization in Idlib. On January 28, Jabhat Fatah al-Sham absorbed sixteen other groups to create HTS. The more "moderate" group Ahrar al-Sham chose not to join this new coalition, but the majority of its members did so on their own, including senior fighter Hashem al-Sheikh, who left Ahrar to become the leader of HTS (former Jabhat Fatah al-Sham chief Abu Muhammad al-Julani heads the new group's military branch). The defections were unsurprising given that Ahrar was already showing fissures last year ahead of Astana -- the group's pro-Turkish leadership favored participating in the conference, but the bulk of its fighting base was hostile to Russian mediation.

Soon after the merger, HTS began eliminating rivals such as Liwa al-Aqsa, (formerly Jund al-Aqsa), its erstwhile partner against Ahrar al-Sham's Turkish-backed leadership and other "moderate" elements. This led various HTS opponents to merge with Ahrar al-Sham, pitting former allies within the Jaish al-Fatah umbrella coalition against each other. HTS and Ahrar fighters have since clashed regularly, including for control of Bab al-Hawa, the crossing point for most of Idlib's foreign humanitarian aid. Previously, the two groups controlled a patchwork of rival territories, but some homogenization is now emerging, with HTS dominating around 80 percent of the province and Ahrar largely confined to areas near the border and Aleppo.

HTS has sought to unite the rebels in order to further its vociferously anti-Assad agenda and wider jihadist goals. Accordingly, it has used terrorist attacks to show its enmity toward the regime and its intention to remove Bashar al-Assad from power. On February 25, five suicide bombers killed forty people in Homs, including the local military intelligence chief. And on March 11, two suicide bombers killed seventy-four people in Damascus, mostly Iraqi Shiite pilgrims.

HTS has also launched military campaigns on several fronts. In February, it attacked Deraa city in partnership with several "moderate" groups belonging to the Southern Front. In March, it began a campaign in the eastern Damascus suburbs of Jobar and al-Qabun, resulting in the most intense fighting the area had seen since summer 2013. And in northeast Latakia province, the group began to advance toward the Russian airport in Hmeimim.

Yet Hama has borne the brunt of this year's HTS offensive, with the group aiming to seize a great Sunni city and provincial capital that was previously calm for most of the war. From Khan Sheikhoun, HTS advanced to within a few kilometers of Hama. The Christian city of Maharda, a Syrian army stronghold, was also seriously threatened. The situation was so dire that the regime had to divert troops southward from the Aleppo-area battle against the Islamic State in order to repulse HTS in Hama. The army has since regained some lost ground, but Hama is still keenly vulnerable.

It is in this military context that Assad decided to bomb Khan Sheikhoun with nerve gas on April 4. He likely sought to shatter local resistance and stave off further rebel offensives emanating from that area -- though understanding his military motivations does not imply that his purposeful use of strategic weapons against civilians is any less unacceptable.

Syria's military leaders now seem to be preparing for an Idlib offensive with greater urgency. Russia may not agree with launching such a campaign at the moment, but Assad may have felt that he could no longer sit idle on this front while HTS grew stronger. Moreover, Moscow's efforts to divide the rebels have apparently failed -- the success of recent HTS military operations and the furor over the Khan Sheikhoun chemical attack may bring Ahrar al-Sham back into the jihadist fold. Even if the group remains estranged, it has little chance of keeping HTS in check.

To compensate for their manpower shortage, the Syrian army and its allies will presumably continue their approach of using massive, indiscriminate bombardment to force civilians to flee. Once rebel fighters are isolated, the ground attack can begin. Khan Sheikhoun is a major strategic goal in the Hama counteroffensive -- reconquering it would allow the regime to eliminate the rebel threat to Hama and all of central Syria, including Homs. According to the pro-regime website al-Masdar, forces from Iran's Islamic Revolutionary Guard Corps and Hezbollah were deployed on the Hama frontline earlier this month, while Russian troops were sent to defend Maharda.

Meanwhile, the regime is continuing its offensive to expel the last of the rebels fighting on the outskirts of Aleppo city. Toward that end, the army could conceivably seek help from Kurdish forces in the Afrin area. The two actors have apparently coordinated their military efforts in the past, namely in the Azaz corridor in February 2016 and during the recapture of East Aleppo in July. More recently, Russia deployed troops to Manbij and northern Afrin last month to protect the Kurds from a possible Turkish intervention, so they may be willing to return the favor by supporting Syrian army operations in Aleppo and Idlib provinces.

Assad's plans for Idlib may yet be constrained by one factor: the uncertain fate of the Shiite towns al-Fua and Kefraya, besieged by rebels since March 2015. Iran and Qatar mediated an agreement under which the towns would be evacuated in exchange for Hezbollah ending its siege of two rebel towns near Damascus, Madaya and Zabadani. The exchange was originally scheduled for April 5 then postponed to April 12; it is ongoing as of this writing. If the evacuation is not completed for whatever reason, a major Idlib offensive would no doubt spur HTS to massacre the Shiites of al-Fua and Kefraya or capture them as hostages.

ANOTHER FLOOD OF REFUGEES FOR TURKEY?

As described above, the Syrian army has long flouted the Geneva Conventions by indiscriminately bombing areas in order to sow fear and separate civilians from fighters, deliberately hitting hospitals, markets, and similar targets. Pursuing this approach in Idlib province -- home to 1.2 million people -- would likely spur another massive exodus to Turkey, which is unacceptable to Ankara.

President Recep Tayyip Erdogan has several options to prevent that outcome, though all of them come with obstacles. He still hopes to create a safe zone in northern Syria to host any new refugee flows, but that is impossible in the absence of a UN Security Council resolution and firm Western military determination.

Turkey also has sufficient forces to create a zone of its own in northern Idlib province, perhaps encompassing the Turkmen villages northeast of Jisr al-Shughour and the displaced camp residents around Bab al-Hawa and Atima. Yet while such an approach would offer the greatest protection to fleeing civilians, Erdogan has no intention of intervening there militarily. His priority in Syria is to prevent the creation of a wholly independent Kurdish border region and, by extension, a new base for the Kurdistan Workers Party, the group that has waged war against the Turkish government for decades. Accordingly, he may be content to reach understandings with local rebels in order to establish a de facto safe area in northern Idlib similar to what currently exists between Azaz and Jarabulus.

As for the United States, Washington now faces a decision on whether Assad's departure is once again a priority after the Khan Sheikhoun attack -- and, if so, where this goal falls in with the Trump administration's emphasis on retaking Raqqa and destroying the Islamic State. There are no easy answers in Idlib, where the rebellion is increasingly being taken over by al-Qaeda elements and the regime seems bent on using all means at its disposal to clear them out, whatever the cost to civilians. Thus far, direct U.S. action in the province has been limited to a string of airstrikes against al-Qaeda targets in late March. Given the difficulty of finding partners on the ground who share U.S. goals, that might be all Washington is willing to do once the Assad regime launches its Idlib offensive in earnest, though all bets may be off if he uses chemical weapons again.