Will Assad Target Idlib After Aleppo?

As Aleppo's eastern districts continue to collapse, the regime will soon turn its attention to other pressing fronts, but manpower shortages will likely force it to focus on just one of them first.

Although it will take several days for the Syrian army to reduce the last pockets of resistance in Aleppo, the city's complete fall is imminent. The regime victory is a fatal blow to the opposition, at least in the sense that the rebels can no longer claim to represent a political and military alternative to the government of Bashar al-Assad. The outcome will also strengthen the army and its allies by freeing up large numbers of troops, artillery, and Russian air capabilities, both to launch the next offensive and to better protect existing regime zones. The question is whether their main focus will be Idlib, Raqqa, or Deir al-Zour. Answering this question requires a closer look at military strategy and geopolitics.

TARGETING THE REBEL STRONGHOLD IN IDLIB

After recapturing Aleppo, the army will most likely attempt to extend its territory to the west of the city, since the rebel frontlines are only a few hundred meters from the nearest loyalist neighborhoods. The regime has erected a strong line of defense around Aleppo, but it is not immune to a new offensive led by Jabhat Fatah al-Sham (JFS), the Syrian branch of al-Qaeda formerly known as Jabhat al-Nusra. Operating from its Idlib stronghold, the group temporarily broke the siege in August, then threatened Aleppo's loyalist districts again in October. 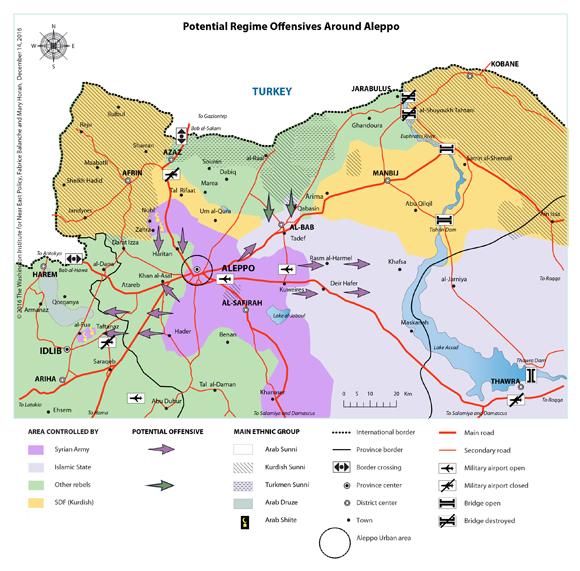 For these and other reasons, targeting Idlib will probably be the army's next main priority. The province has the most powerful concentration of rebels; according to the Institute for the Study of War, it boasts more than 50,000 fighters regrouped under the umbrella organization Jaish al-Fatah and led by JFS. A regime offensive to the west would also have the advantage of protecting Hama from rebel forces located just ten kilometers north of that city.

Meanwhile, army forces in the coastal region may try to retake the city of Jisr al-Shughour, which was lost along with Idlib in spring 2015 after fierce fighting with JFS and its allies. Jisr al-Shughour is the key point for defending the Alawite regime strongholds and Russian military bases on the coast. 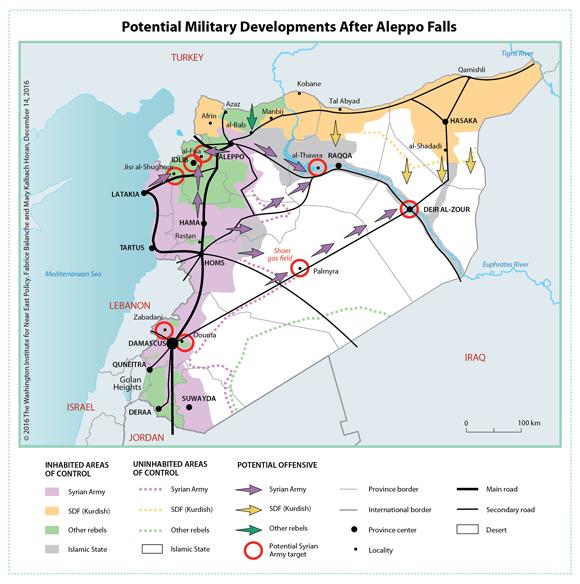 KEEPING AL-QAEDA OUT OF SHIITE ENCLAVES

For their part, Iran and the Shiite militias under its aegis will no doubt insist on ending the encirclement of al-Fua and Kefraya. The 20,000 inhabitants in these two Shiite towns have been surrounded by rebels since March 2015.

The defense of Shiite localities in northern Syria has long been Hezbollah's weightiest argument to convince supporters back home in Lebanon that its commitment to the war is justified. The group has spared no effort to protect al-Fua and Kefraya. It is also using the situation in these enclaves to justify its internationally condemned siege of Zabadani and Madaya near Damascus. Hezbollah appears to have struck a deal with the rebels: if anything further happens to the Shiite towns, then the two besieged Sunni towns will be punished accordingly. Yet this deal is increasingly fragile. If an offensive against Idlib becomes imminent once East Aleppo falls, JFS may try to seize al-Fua and Kefraya, which would result in massacres and hostage-taking regardless of the potential retaliatory consequences for Madaya and Zabadani.

THRUST TOWARD RAQQA BY WAY OF THAWRA?

Another potential post-Aleppo scenario is a regime offensive toward the Euphrates Valley, beginning with the reconquest of territory between Kuweires air base and Lake Assad. In addition to blocking the southern advance of pro-Turkish rebels, Assad and his allies still seem intent on seizing Raqqa back from the Islamic State (IS) at some point. To meet this objective, they would need to reestablish control over Thawra Dam on the Euphrates River. Thawra supplies power to the provinces of Raqqa, Aleppo, and Deir al-Zour; even more important, it supplies irrigation water for three-quarters of the agricultural land in Raqqa district. Whoever controls the water controls the local populations.

Bashar's father, Hafiz al-Assad, understood this principle well when he launched the dam's construction in the late 1960s as a parallel project to the Aswan Dam on the Nile. He did so less for economic reasons than for political control of the Euphrates tribes.

The regime could also use the resources freed by the Aleppo victory to reopen the road from Palmyra to Deir al-Zour. An informal Syrian army source indicated that some 30,000 troops will soon be available, though this number may be overstated -- NATO and Russian sources have estimated that the regime only has around 20,000-25,000 total troops capable of deploying "outside of frontline areas." Whatever the case, the influx of forces from Aleppo will not be enough to launch several larges offensives at the same time, or perhaps even to protect existing regime territory.

For example, the regime-controlled half of Deir al-Zour city has been surrounded by IS since May 2015, when Palmyra fell for the first time and the road to Damascus was cut off. The local army forces and estimated 100,000 civilians besieged there are supplied by air at present, but this lifeline has become increasingly precarious due to frequent IS assaults against the city's airport. The latest setbacks in Palmyra -- which the regime captured earlier this year, only to watch IS retake it this month after significant army forces were withdrawn for the Aleppo campaign -- further demonstrates the fragility of the situation for Assad's troops in the area. Even so, expelling the group from central Syria may be easier now because IS forces are beset on all fronts, particularly in northern Iraq.

By controlling the Palmyra-Deir al-Zour axis, the army would contribute to the encirclement of Raqqa, linking regime forces with the Kurdish-led Syrian Democratic Forces. Last week, the SDF launched an offensive against IS from al-Shadadi, though the operation has made few if any gains thus far. A regime thrust toward Deir al-Zour would also advance the wider regional fight against IS, perhaps opening the door to some sort of rapprochement between Russia and the international anti-IS coalition. Past talks led by U.S. and Russian officials broke down in October, but the incoming Trump administration may be more inclined to conclude a deal in order to speed up the capture of Raqqa -- perhaps along the previously discussed lines of coordinating (or at least deconflicting) military efforts against IS in exchange for regime and Russian allowances on civilian relief, humanitarian access, and related issues. Despite continued U.S. air support and other assistance, the SDF cannot mount a serious Raqqa ground offensive on their own given the recent intervention by Turkey, whose forces pose a formidable threat to the Kurds.

As for Ankara, its goal remains the same: preventing the Kurds from achieving territorial unity along Syria's northern border. Any Turkish talk of advancing on Raqqa is likely only a pretext for actions that help Erdogan realize the first goal.

Although the situations in Deir al-Zour and Idlib are equally urgent, the Syrian army does not have the means to launch two large-scale offensives simultaneously. And while the Euphrates anti-IS option would be better received by Western powers than an Idlib campaign, leaders in Moscow, Damascus, and Tehran do not seem to care much about Western perceptions at this point.

Vladimir Putin seems most concerned about Turkey's calculus, since Ankara could usher in early resolution of the conflict by depriving the rebels of their logistical support. It seems clear now that Putin and Turkish president Recep Tayyip Erdogan signed a nonaggression pact when they met in Saint Petersburg on August 9, essentially confirming the partition of Syria into zones of influence. The application of this presumed pact has been gradual. First, pro-Turkish rebels disassociated themselves from JFS, facilitating the encirclement of East Aleppo. Meanwhile, the same rebels conquered territory between Azaz and Jarabulus earlier this year with backing from the Turkish army. Then, once the Syrian army's victory in Aleppo was assured, Turkey launched a direct offensive against al-Bab.

Therefore, if Assad decides to attack Idlib province next, he would benefit from the benevolent neutrality of the Turks, who for their part could try to seize Manbij or even Tal Abyad from the Kurds. By cutting more roads between the Kurdish cantons of Afrin, Kobane, and Qamishli, Turkey would definitely put an end to the Kurdish dream of territorial unity. This would also be a palatable outcome for Assad (who has long refused to grant Syrian Kurds autonomy on the Iraqi model) and Putin (who finds the Kurds too closely aligned with Washington).

Yet a wider Turkish-Kurdish confrontation would have a number of negative consequences for the United States, such as reinforcing the Islamic State's position in Syria, damaging American credibility in the region, and highlighting Washington's perceived unwillingness to protect its allies. These considerations may give U.S. officials further reason to seek understandings with Russia on targeting IS and al-Qaeda while protecting civilian populations and moderate rebels. Renewed consideration of various "safe zone" proposals in northern and southern Syria may also be in order.