by Aaron Y. Zelin
Also available in
About the Authors

An unprecedented attack by a female bomber should not come as a surprise considering the spike in women’s jihadist activism since 2011.

On October 29, a thirty-year-old woman named Mouna Guebla detonated a grenade on Avenue Bourguiba in central Tunis. Although the suicide attack did not kill the targeted police officers, it did injure fifteen security guards and five civilians. Tunisian authorities claim the plot is connected to the Islamic State. No direct link has been uncovered yet, nor has the group claimed involvement, but the government believes two or three facilitators may have helped Guebla prepare for the attack. She was not on a government watch list, though her relatives and neighbors stated that she was radicalized online and had recently spent a week in Ettadhamen, a neighborhood known for jihadist activism and foreign fighter recruitment. In any case, it is the first time a successful jihadist attack has been conducted in Tunisia by a woman.

Yet the incident is not necessarily surprising. Considering the number of Tunisian women who have been involved in jihadist activity at home and more militarized activity abroad since the 2011 revolution, it was only a matter of time.

When the al-Qaeda affiliate Ansar al-Sharia in Tunisia (AST) first became active in 2011-2012, female members took part in public demonstrations on behalf of the organization. Beginning in November 2011, a group of up to a dozen female students at the University of Manouba, in coordination with AST leader Mohamed Bakhti, protested for the right to wear the niqab (full face veil) in the classroom and separate male and female students. In February 2012, female AST members protested in front of the Foreign Ministry to seek the release of Tunisian fighters imprisoned in Iraq for joining an earlier iteration of the Islamic State.

AST women subsequently took a more behind-the-scenes role, but they still helped with a number of the group’s public forums and private religious lectures. Moreover, when Tunisian authorities arrested Fatma Zouagi in October 2014, they revealed that she had managed media operations for AST and Katibat Uqba ibn Nafi, the Tunisian branch of al-Qaeda in the Islamic Maghreb.

FIGHTING IN LIBYA AND SYRIA

The role and prominence of Tunisian female jihadists grew even more as they joined the Islamic State abroad. According to Tunisian government sources, 700 of them traveled to Syria, and 300 to Libya. However, the reason for their travel was not, as Tunis falsely claimed, jihad al-nikah, a euphemism for providing sex to male militants. Although the Islamic State is known to have sexually abused women and forced them to take other actions against their will, there is no credible evidence that Tunisian women joined the organization specifically to “comfort” fighters.

Instead, many went to live out their interpretation of a “pure” Islamic life and help with the administrative aspects of the “Caliphate.” For instance, in February 2014, one of the most prominent Tunisian female members, Umm Rayan al-Tunisi, founded the Islamic State’s al-Khansa Brigade in Syria, which was in charge of hisba (moral policing) activities for women. She would later help expand this brigade into Libya after the Islamic State took control of Sirte. Another female fighter in Syria, Umm Hajr al-Tunisi, headed sharia classes and helped recruit women into the organization’s Diwan al-Taalim (Education Administration) and Diwan al-Siha (Health Administration), where they earned an estimated monthly salary of $100-200. Meanwhile, Umm Abdul-Rahman al-Tunisi helped facilitate arranged marriages in Mayadin, Syria.

In Libya, female fighter Rahma Chikhaoui claimed that potential recruits like her received weapons instruction for three weeks, and that many trained to become suicide bombers, though there is scant evidence of female bombers operating in Libya. Similarly, Umm Omar al-Tunisi (aka Zainab) claimed that she learned how to use an AK-47 while training on a beach after arriving in Libya, noting that women were given instruction on their choice of weapons, including rocket-propelled grenades, PKT machine guns, and DShK heavy machine guns. She also said that the Islamic State gave each woman her own explosive belt.

Given such accounts—and the fact that the Islamic State endorsed female fighters in the October 5, 2017, issue of its al-Naba newsletter—an incident like this week’s grenade attack is not shocking. In fact, women sympathetic to the jihadist movement had previously conducted plots or attacks in places such as Australia, Britain, Chechnya, and Indonesia.

After the Islamic State’s Sousse beach attack in June 2015, the Tunisian government accelerated its arrests of jihadists and their sympathizers, including women. That September, authorities released a wanted list in which three of the sixteen jihadist suspects were women. Since then, the government has arrested more than 100 women for a variety of crimes related to jihadism, according to information released by the government and local Arabic and French media. These arrests have occurred all over the country, illustrating yet again that Tunisian jihadism is not an area-specific phenomenon (see map). 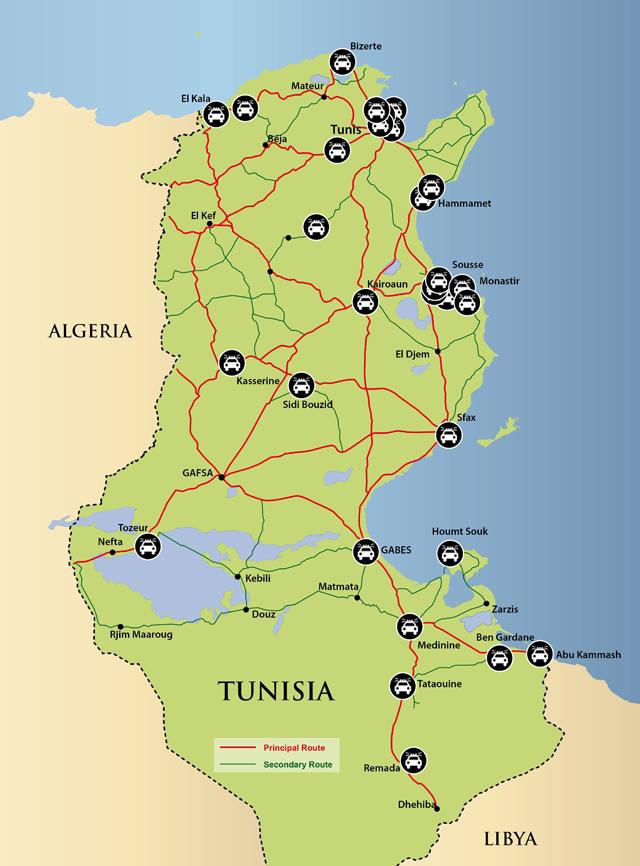 There are many reasons underlying these arrests. Some women were detained for attempting to fight abroad in Libya or Syria, establishing contact with jihadist groups online, recruiting fighters, or simply being members of a terrorist group. Other charges included promoting Islamic State content on social media, praising terrorist attacks in Tunisia, pledging allegiance to Islamic State leader Abu Bakr al-Baghdadi, downloading jihadist videos, raising money to fund groups abroad, facilitating travel to conflict zones, and money laundering (e.g., one cell was found to have around 3 million dinars, or more than a million U.S. dollars).

Jihadist concerns also spurred a mini-crisis between Tunis and Abu Dhabi in late 2017, when Emirates Airlines banned Tunisian women from flying due to alleged security concerns. This led to a grounding of air traffic between the countries for about two weeks.

Although authorities understandably tend to focus on men when assessing Tunisia’s progress against jihadism, it is important not to downplay the security dilemmas presented by female sympathizers, whose involvement in AST and the Islamic State has grown markedly since 2011. By acknowledging the agency of women in these movements and avoiding overly simplistic or sexualized narratives like jihad al-nikah, officials in Tunis and their partners abroad can begin to untangle this complex phenomenon and formulate effective ways to tackle it.

Aaron Y. Zelin is the Richard Borow Fellow at The Washington Institute and author of the forthcoming book Your Sons Are at Your Service: Tunisia’s Missionaries of Jihad (Columbia University Press, 2019).