by Hamdi Malik, Michael Knights, Eric Feely
Also available in
About the Authors

Michael Knights
Michael Knights is the Jill and Jay Bernstein Fellow of The Washington Institute, specializing in the military and security affairs of Iraq, Iran, and the Persian Gulf states. He is a co-founder of the Militia Spotlight platform, which offers in-depth analysis of developments related to the Iranian-backed militias in Iraq and Syria.
Eric Feely

Eric Feely is a Research Assistant in the Military and Security program at the Washington Institute. He can be followed on Twitter at @EricHFeely

This facade group is used to "brand" muqawama attacks on Turkish targets.

History and objectives: The first mention of Ahrar al-Iraq was in a statement issued on June 19, 2022, saying that “the bases and other lands occupied by Erdogan’s gangs are legitimate targets until their liberation…”.

Not enough evidence exists yet to link the Ahrar al-Iraq facade to a specific real-world fasail. On June 19, 2022 the brand launched and retrospectively claimed about a quarter of the unclaimed attacks on Turkish bases in 2021/2022. Pattern analysis of those attacks suggests cooperation with the ground-holding militia units in the northwestern Nineveh Plains (see below).

The group has demonstrated a very mixed (but gradually improving)  level of resourcing. Unusually, they have exclusively used longer-ranged and heavier 122mm rockets, not 107mm. Until July 22, their static launching platforms were quite rudimentary and their accuracy was poor or deliberately non-lethal. They used their first large multiple-rocket launch"mattress" for the 14-round July 22 strike - the first strike they undertook after their public launch. On June 2, before their public launch, they claimed (without evidence) to have used an Iran-designed Murad-6 (Shahed-136-type delta-wing) drone against Zilkan. 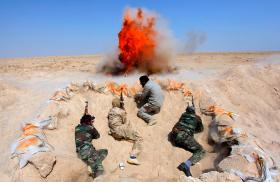 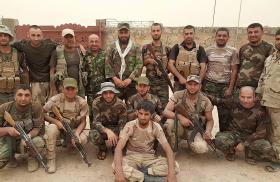 Brief Analysis
Looking for Legitimacy: Taliban Diplomacy Since the Fall of Kabul
Aug 15, 2022
◆