An Opening for the Syrian Regime in Deir al-Zour

Events on the ground are fluid in the eastern Syrian city and province, but dynamics suggest Syrian forces and their backers will prevail over the Islamic State and U.S.-supported fighters.

Much recent speculation has focused on the future of Syria's Deir al-Zour city and province. A major cause of such speculation has been debate over the U.S. view of Iran's role in Syria -- in particular, its goal of creating a land bridge from Tehran to Beirut. Indeed, on-the-ground military movements suggest Deir al-Zour will be reconquered by the Syrian army and its allies.

City Encircled by the Islamic State

In 2012, the Syrian army lost half of Deir al-Zour city and, quickly thereafter, the whole province to rebel forces. Whereas the government-held part of Deir al-Zour is connected by a road to Homs via Tadmur (ancient Palmyra), in May 2015 the Islamic State seized Tadmur, isolating Syrian army soldiers amid a vast territory controlled by the jihadists. Indeed, government-run land shrank after successive IS offensives. Previously, neighborhoods under regime control were supplied from the airport, but in January 2017 the government lost control of the road connecting the city to the airport, ending this arrangement. To stave off a final assault, Syrian-regime, Russian, and even Iranian forces are relentlessly bombing the IS frontlines with missiles. Thanks to helicopter support, communication with the outside remains possible, and cargo planes drop enough goods to feed the 100,000 civilians who still reside in the government-run area.

The staunch defense of Deir al-Zour put up by the Syrian regime and its allies is rooted in their intention to ultimately reconquer eastern Syria. This role has been entrusted to one of Syria's best generals, Issam Zahreddine, who relies on battalions of the Republican Guard, the elite troops of the Syrian army. In January 2017, hundreds of Hezbollah fighters were sent as reinforcements to Deir al-Zour, which had been mauled by an IS offensive. The National Defense Army, one of the Syrian regime's paramilitary forces, has mobilized all males older than fifteen in this effort. Also assisting the Syrian army are six hundred fighters of the al-Shaitat tribe, who are seeking to avenge the massacre perpetrated by IS against their villages. 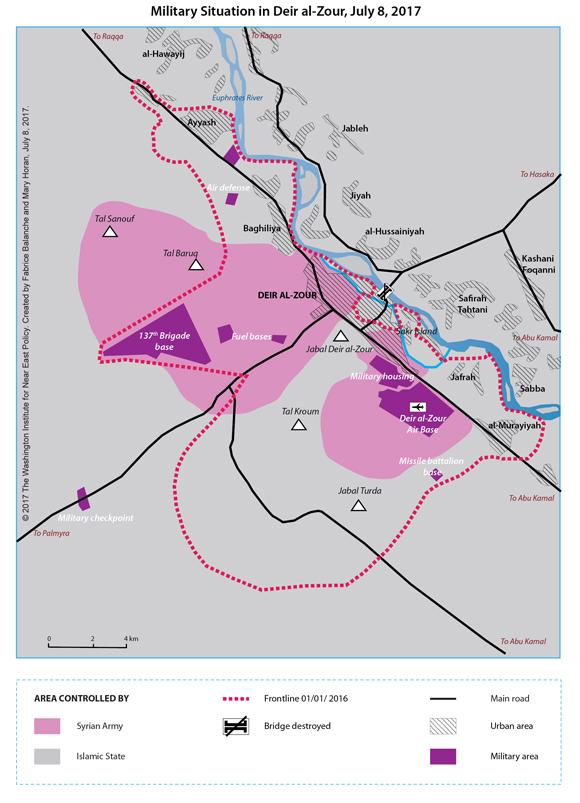 Syrian Army Caution in the Desert

In spring 2016, after resuming the Tadmur campaign, the Syrian army tried to reopen the Tadmur-Deir al-Zour road, but quickly abandoned the project when it faced strong Islamic State resistance. Thereafter, all available forces were mobilized to take over Aleppo, where a victory in December 2016 freed tens of thousands of fighters to potentially venture into eastern Syrian. Foreign Shia militias are also on the frontlines. Since March 2017, the Syrian army and its allies have been advancing toward the east, benefiting from the withdrawal of IS around Tadmur. In early June, they reached the Syria-Iraq border, thus blocking the U.S.-backed rebels based in al-Tanf. The Syrian army now plans to seize the desert area to the east of Salamiya. Despite these advances elsewhere, a blitz offensive on Deir al-Zour does not appear likely, given the risk of bitter failure, as occurred in December 2016, when an IS counteroffensive forced regime fighters to abandon Tadmur.

The Syrian army and its allies are progressing methodically in the Badia (Syrian desert), seizing water points, communication routes, gas and oil fields, and phosphate mines. Syria needs its resources to rebuild its infrastructure and ensure economic security. The reconquest of this desert area, rich in hydrocarbons, has been entrusted to Liwa Suqur al-Sahara, or the "Desert Hawks," a private army financed by Ayman Jaber, a businessman close to Syrian president Bashar al-Assad. He receives a share of the hydrocarbon production from the released wells. In fall 2016, the Desert Hawks integrated into the Fifth Corps of the Syrian army, but they retain significant autonomy and take an independent salary. They are also on the frontline to reclaim Deir al-Zour province, which produced two-thirds of Syrian oil in 2011. 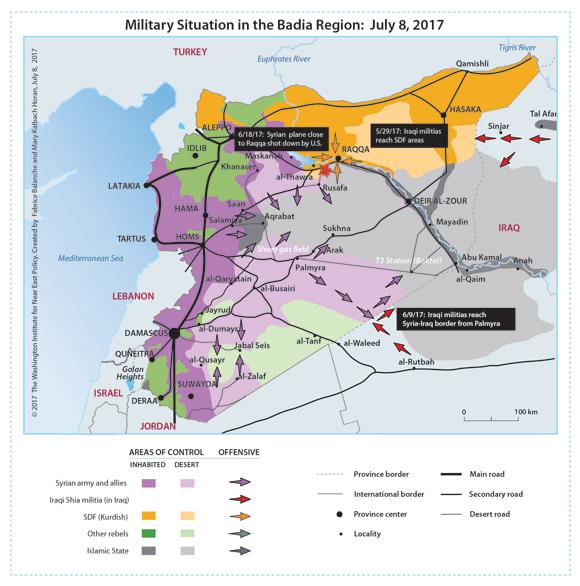 In May 2017, when Iraqi Shia militias launched an offensive to the Syria-Iraq border, they traveled 150 kilometers in one day over an unimpeded road, along flat terrain, in an area evacuated by the Islamic State. The situation is different for Deir al-Zour, which is a 200-kilometer journey from Tadmur. Traveling from Tadmur toward Deir al-Zour, the first 70 kilometers to Sukhna are dominated by hills, which the Syrian army must first control before using the more-easily-navigable road. In June 2017, demonstrating the scale of the challenge, the Syrian army expended nearly a month to seize Arak, a village 20 kilometers northeast of Tadmur. Efforts now concentrate on Sukhna, an oasis town with some 20,000 inhabitants in 2011 that IS has since transformed into a fortification. The last obstacle before Deir al-Zour, Sukhna is located at the center of a railroad network radiating across the central Badia to Aleppo, Raqqa, Salamiya, and Deir al-Zour. The battle is therefore likely to last a while, which is why the Syrian army is advancing toward Sukhna from several fronts: Tadmur, Rasafa, and Salamiya.

The flat road northeast of Sukhna will ease the Syrian army's progress, but this does not mean regime forces will launch a blitz offensive. To the contrary, extending communication lines would imperil such an offensive if the desert were not cleared of Islamic State elements beforehand. If IS threatens the Deir al-Zour garrison with a new attack, the regime, for its part, can always send reinforcements by helicopter before opening a land route. Alternatively, the Syrian army may choose to avoid Sukhna and to pursue Deir al-Zour directly from the T3 oil-pumping station in Baktal. But this station appears to be strongly defended by IS, given that the Syrian army has remained roughly ten kilometers to its west since mid-June, rather than seizing the site. The station holds great strategic importance, serving as the oil-collection point for the Euphrates Valley and a crossroad leading to Abu Kamal, Mayadin, and Deir al-Zour.

A U.S.-Russia Agreement in the Euphrates Valley?

Since April 2016, the U.S.-backed Syrian Democratic Forces (SDF) have been stationed about forty kilometers north of Deir al-Zour, but they have never tried to draw any closer. This makes sense in light of an obvious question: Why would a heavily Kurdish force come to the rescue of the Syrian army? And why would it lose men to liberate an Arab city far from Kurdish territory? As viewed by the local Arab population, the arrival of Kurdish fighters could be seen as a mere switch in overlords.

A more appropriate force to liberate the province would seem to be Sunni Arab in makeup, explaining U.S. support for the Usud al-Sharqiya (Lions of the East), a rebel group originally from the area. Yet the May 2017 encirclement of al-Tanf by the regime and its allies will block any new offensive in the Deir al-Zour area by this group, unless the United States flies the rebels from al-Tanf to the south of Hasaka, in the SDF-run area. These forces, however, number only a few hundred and without SDF support would have little chance of triumphing over IS. Furthermore, their potential foes also include Iraqi Shia militias, which have occupied positions to the south, east, and north of Deir al-Zour and are ready to attack, thereby gaining control over the road to Deir al-Zour.

If the Shia militias succeed in such an effort, likely clashes with local Sunni Arab tribes, unwilling to see a Shia militia occupying their territory, will be frightening. To some extent, Assad has anticipated these frictions by maintaining loyalty and dialogue with certain tribal leaders. That approach has paid off in the case of Nawaf al-Bashir, head of the powerful Baggara federation, who returned from his Istanbul exile to live in Damascus in January 2017. As a regime supporter in the Euphrates Valley, Bashir perfectly exemplifies the type of local figure in whom the regime could invest power after the war.

Of course, Washington's Gulf allies also have ties to local Arab tribes and could activate these ties, although such efforts would entail large amounts of money and military support on the ground. Yet, according to David Ignatius, writing in the Washington Post on July 4, 2017, Washington and Moscow might already have partitioned the Euphrates Valley: Raqqa for the United States and Deir al-Zour for Russia.

Ample Time for the Syrian Army

The current military situation would seem to confirm the existence of this U.S.-Russia deal -- a deal doubtless not to the liking of the Syrian regime, which seeks to retake the southern bank of the Euphrates, the al-Thawra Dam, and Raqqa, once the city is liberated by the SDF. However, if the regime wants to reimpose itself in Deir al-Zour province, it will need Russian air support and must therefore bend to Moscow's will. Demonstrating apparent Russian willingness to be a serious U.S. partner in Syria, the Kremlin did not react strongly to the American downing near Raqqa on June 18 of a Syrian plane threatening the SDF.

The city of Deir al-Zour could well be entirely reoccupied by the Syrian army in fall 2017, with IS being pushed back toward Abu Kamal. Evidence suggests the Islamic State will not be able to take the city, whereas the Syrian army bends but does not break. The U.S.-backed rebels, for their part, are not strong enough to fight IS and reach Deir al-Zour, leaving space for regime forces to patiently carry out their campaign.