The IRGC Morphs Into an Expeditionary Force

Funeral notices indicate that Iran has increased its use of IRGC Ground Forces in Syria to offset mounting losses by the elite Qods Force, and this pattern could signal a wider transformation in how the IRGC operates abroad.

On May 6, at least sixteen Iranian nationals and an undisclosed number of Shiite foreign fighters under Iranian command were killed during the rebel seizure of Khan Touman village southwest of Aleppo. All sixteen Iranians served in the Islamic Revolutionary Guard Corps, specifically the IRGC Ground Forces. The losses indicate a continuing trend in Iran's deployment patterns in Syria: namely, the expanded use of IRGC Ground Forces in addition to or in place of the IRGC-Qods Force (IRGC-QF), the elite branch normally used for expeditionary operations. They also call into question past reports that large numbers of Iranian forces were withdrawing from Syria.

Fourteen of those killed in Khan Touman were natives of Mazandaran province in northern Iran and served in the IRGC's 25th Karbala Division. The other two were natives of neighboring Gilan province and served in the Qods Provincial Force (not to be confused with the IRGC-QF). In response to the incident, Karbala Division spokesman Hossein Ali Rezaei disclosed on May 10 that all of the unit's surviving members serving in Syria, including twenty-one wounded, were being transferred back to Iran, but there is no sign of a wider Ground Forces withdrawal.

More broadly, a survey of funeral services held in Iran for soldiers killed in Syria from January 19, 2012, to May 10, 2016, documents a total of 400 Iranian fatalities. With the exception of six individuals from the regular army (Artesh), all of these troops served in the IRGC. Although the specific IRGC branch is unknown for roughly half of the combat fatalities, the IRGC Ground Forces accounted for at least a quarter of them, compared to only twenty-eight identified as IRGC-QF. 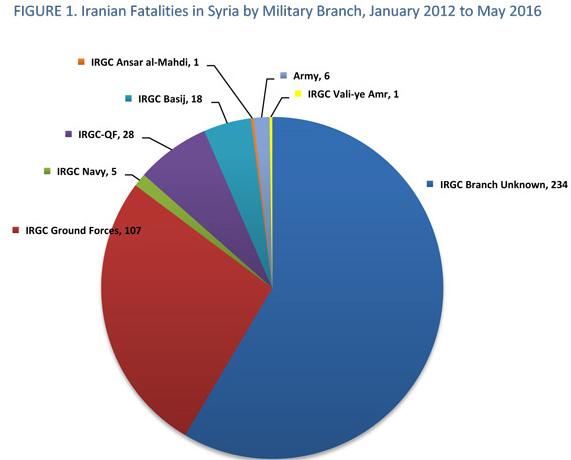 To be sure, the fatalities whose branch has not yet been established could reveal more IRGC-QF losses -- indeed, the large number of such fatalities may reflect an attempt to obscure their service in that elite unit. Yet the fluctuation in Iran's casualty patterns over the course of the war shows a clear rise in the number of identified Ground Forces servicemen killed in combat since October 2015. This is not surprising: the Qods Force is a relatively small branch, and when it began to suffer higher casualties in Syria, the IRGC leadership had no choice but to deploy the Ground Forces. 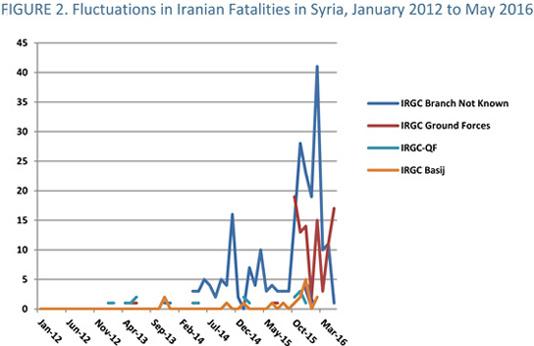 In contrast, Iran's deployment of Artesh personnel does not seem to reflect such a necessity. On April 4, Brig. Gen. Ali Arasteh, the regular army's deputy for coordination, told Tasnim News Agency that forces from the 65th Airborne Brigade had been sent to Syria as "advisors." Yet on April 20, army chief Maj. Gen. Ataollah Salehi emphasized that "the army has no responsibilities with regard to extending advisory assistance to Syria." He continued: "There is a certain organization in this country [referring to the IRGC] that is engaged in such work...We have never claimed that the 65th Airborne Brigade is present there. However, some volunteers have been deployed in Syria and are subjected to that certain organization, and it is possible that members of the 65th Brigade are among them." In other words, individual army personnel are apparently being seconded to IRGC units in Syria, not operating on their own as army units. In any case, reports of combat deaths on April 11 and April 20 provided proof that personnel from the following army units were present in Syria: the 258th Martyr Pazhouhandeh Brigade, the 45th Special Forces Brigade, the 65th Airborne Brigade, and the 388th Armored Brigade.

Similar patterns emerge from a survey of funeral services held in Lebanon for Hezbollah fighters, and in Iran for Shiite Afghan and Pakistani nationals. Figure 3 shows how both the IRGC and Shiite Afghans from the Fatemiyoun Division militia have shouldered a heavier burden in recent months. The chart shows only modest Shiite Afghan losses for May, but that figure should rise sharply as more information is revealed about fatalities at Khan Touman (initial Persian-language reports indicated that most of the casualties were Afghans). Meanwhile, Hezbollah's losses in Syria have declined sharply, particularly since mid-April. Only one Hezbollah fighter has been reported killed there in May, and all eighteen of the group's losses last month took place prior to April 14. 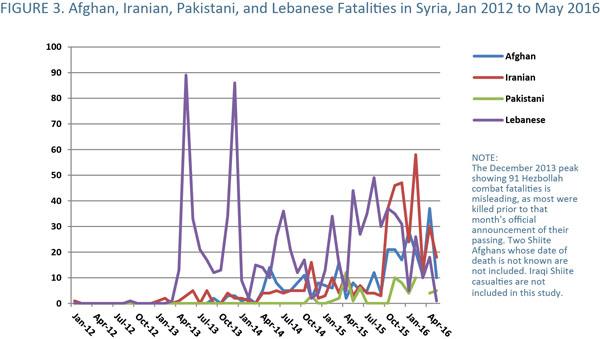 The increasing deployment of IRGC Ground Forces personnel to Syria poses both problems and opportunities for Iran's military leaders. On the one hand, the IRGC's 2007 "Mosaic Doctrine" divided the Ground Forces into thirty-one separate units (one for each province in Iran and two for Tehran) and trained them to fight domestic unrest, so they may not be the best choice for facing well-armed rebel forces in Syria. On the other hand, the war in Syria provides a powerful training ground for IRGC forces in terms of preparing them for potential future operations abroad. Indeed, Iran's current pattern of deployments signifies the IRGC's broader transformation into an expeditionary force, augmenting the Qods Force in this role.