Strong ground support for moderate rebels would be needed to keep any buffer zone in the northwest from falling under the control of al-Qaeda's Syrian affiliate.

In theory, Syria's Idlib province and the eastern part of Aleppo province could serve as safe zones with international protection, since both areas are open to Turkey and could easily receive humanitarian aid from UN agencies and various NGOs (see PolicyWatch 2570, "Two Potential Safe Zones in Northern Syria"). Yet one of the most formidable obstacles to the Idlib option is the presence of radical jihadist groups there, particularly al-Qaeda affiliate Jabhat al-Nusra (JN). Throughout rebel-held western Aleppo and Idlib, "moderate" rebel factions would face a serious challenge fending off JN forces.

The Institute for the Study of the War has identified more than sixty rebel groups in the western Aleppo area, with a total of some 60,000-90,000 fighters. Jabhat al-Nusra is not the largest of these factions: its 10,000 fighters are only half that of the group Ahrar al-Sham, for example. Yet Ahrar and many other militias are now allied with JN, and while those who fight for secular and "moderate" Islamist groups may account for as many as a third of the area's rebel forces, they are mainly found in small, locally recruited units with a few hundred fighters or less.

The most important "moderate" unit is Division 13, a member of the coalition Fatah Aleppo. Supported by the United States and Turkey, the group claims to have 2,000 fighters and has been battling the Syrian army in Aleppo and the Kurdish People's Defense Units (YPG) in the Azaz corridor. Since the Russian intervention began last year, many small groups not affiliated with JN have put aside their Islamist banners and other trappings, joining coalitions with nationalist names such as Jaish al-Nasr (the Army of Victory) and al-Jabah al-Shamiya (the Levant Front). They have done so not only to receive U.S. military aid, but also to resist JN's hegemonic pressures. 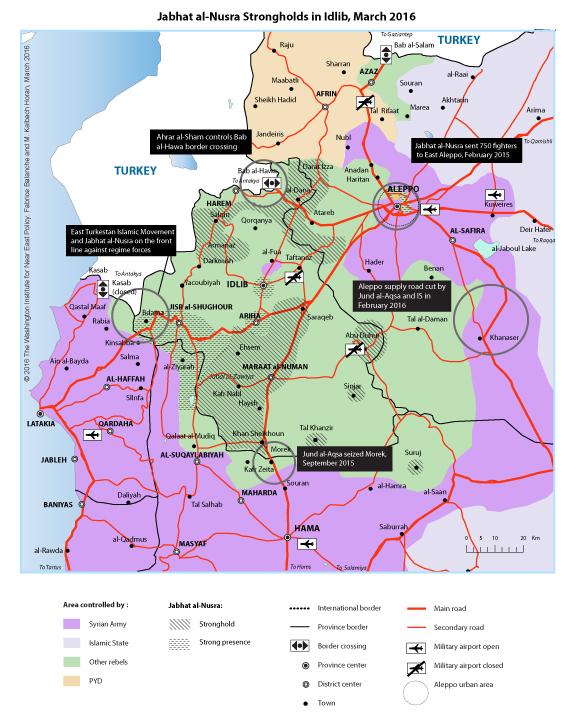 During winter 2013-2014, JN and various other rebel groups pushed the Islamic State out of the western Aleppo area, even as IS forces drove them out of eastern Aleppo and the Euphrates Valley. This war against IS was wrongly hailed as a second revolution by many analysts, who spoke of a burst of "democratic forces" against the jihadists. In fact, it was only an internal conflict between rival jihadists: JN and its local allies wanted to eliminate IS before it could do the same to them. After getting rid of IS, their main competitor in the northwest, they sought to unify the area's various rebel groups by force. Those who refused were either expelled (e.g., Division 13) or eliminated (e.g., al-Hamza Front).

As JN's hegemony became inevitable, the group took control of Jaish al-Fatah (the Army of Conquest), a coalition supported by Turkey, Qatar, and Saudi Arabia. In spring 2015, Jaish al-Fatah advances in Idlib, Jisr al-Shughour, and Ariha shook the Assad regime. The jihadist contribution was fundamental to these victories; for example, suicide bombers from JN's fellow al-Qaeda affiliate Jund al-Aqsa played a major role in opening access to the provincial capital of Idlib city. 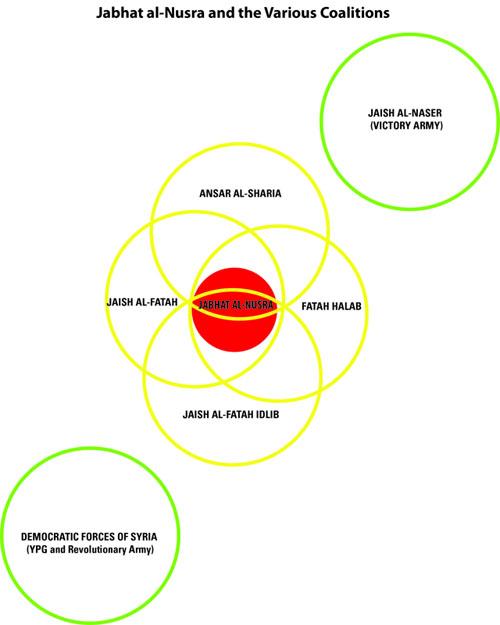 Since this successful offensive, the six subgroups of Jaish al-Fatah have shared control of the province's towns. Idlib was divided into sectors, but JN and its close affiliates appear to have full control of the city. In an interview with Al Jazeera last June, JN leader Abu Muhammad al-Julani clearly stated his intention to create an Islamic emirate in northwestern Syria. In pursuing that goal, the group has used brutal methods similar to those of IS -- the only difference is that executions in Idlib are not advertised as openly as they are in the IS capital of Raqqa. Most non-Sunnis have fled the area, though some were forced to convert, such as the Druze of Jabal al-Summaq (even converting did not prevent the massacre of twenty Druze in Qalb Lawzah in June). JN fighters regularly arrest local civil society activists, many of whom disappear.

Militarily speaking, JN and its affiliates are now able to intervene pretty much anywhere in Idlib province without much opposition from whatever groups may be officially controlling a given village or city. On most of the maps that attempt to illustrate the distribution of rebel factions, JN is typically confined to two specific areas in the province -- the strongholds of Harem and Jabal al-Zawiya -- yet the group is actually present throughout the northwest.

JN AND AHRAR AL-SHAM ARE COMPLEMENTARY

Jabhat al-Nusra has a consistent ideology and a clear political project for Syria. Residents of JN territories generally follow the judgments issued by its courts and respect the integrity and courage of its fighters -- hardly the case for other rebel groups (see below for more on the group's ideological sway). Thus far, JN has tolerated the work of foreign NGOs and the UN's Office for the Coordination of Humanitarian Affairs because it needs their social services to help establish its political power. Humanitarian assistance is currently channeled through the Bab al-Hawa border crossing controlled by JN ally Ahrar al-Sham, and the roads leading from the crossing are directly controlled by JN forces. 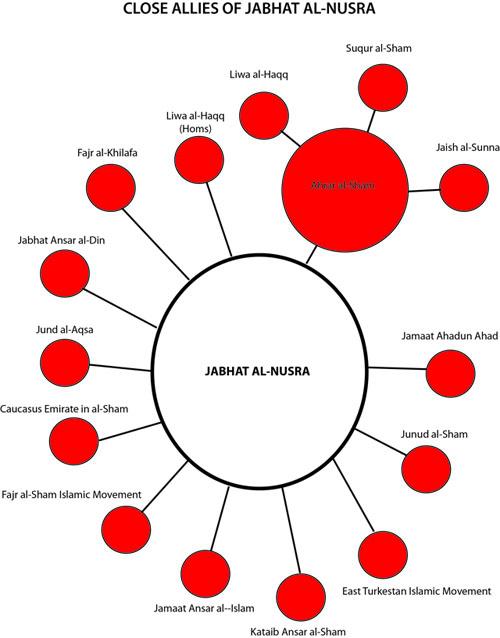 The West does not regard Ahrar al-Sham as a terrorist group even though it has nearly the same ideology as JN, which is formally designated as such by the United States and other countries. Its only real differences from JN are that it has a less centralized management and has not expressed direct allegiance to al-Qaeda leader Ayman al-Zawahiri. Some analysts are suggesting that a fissure will soon develop between the two groups, arguing that Ahrar al-Sham needs to move away from al-Qaeda if it wants to become an acceptable alternative to the Assad regime. Yet just as JN cannot break with al-Qaeda, Ahrar likely cannot break with JN -- doing so would risk losing their local legitimacy and their private backing from Persian Gulf supporters of al-Qaeda. They would also lose their identity, becoming "regular" rebel groups like the others. Moreover, the officers of both organizations were former fellow soldiers of Osama bin Laden, including Julani and Adel Radi Saqr al-Wahhabi al-Harbi for JN, and Mohammed Bahaiya (aka Abu Khalid al-Suri) and Hashem al-Sheikh (aka Abu Jaber) for Ahrar al-Sham. In short, the two groups complement each other perfectly, and it is unrealistic to believe that they will become political competitors during wartime.

JN's strength lies in the geographic diversity of its recruitment, unlike the moderate groups and their highly localized recruitment. This approach has helped JN largely avoid the clan quarrels that often undermine the rebellion.

Another strong point for the group is its ideological power, which helps it maintain legitimacy in many parts of the northwest despite its frequent brutality against locals. The Salafist strain of Islamist thought that JN espouses has been spreading throughout the countryside of Idlib and Aleppo for several decades via battalions of young imams trained in Saudi Arabia. This brand of Salafism is more appropriate to the underdeveloped rural populations in northern Syria than the Muslim Brotherhood's ideology, which is more suited to the urban middle class.

There are some exceptions. Kafr Nabl is often cited as an example of local democracy and secularism, widely highlighted by journalists visiting the north, while the "little Moscow" of Jabal al-Zawiya has always been a leftist stronghold. Yet these exceptions are not reproducible at the provincial level, and Kafr Nabl's free space is steadily being reduced. In January, for example, JN nearly assassinated Raed Fares, a famous civil society activist and head of Kafr Nabl radio. He was forced to give a public mea culpa for broadcasting music on his station, and none of the local rebel groups protested his arrest.

NO SAFE ZONE WITHOUT OUTSIDE GROUND FORCES

Foreign governments and analysts should open their eyes to the true situation in northwestern Syria and stop speculating about "moderate" rebels confronting the jihadists on their own. Today, the West is not considered a powerful actor in this area -- local fighters do not take it very seriously, and Western-backed militias are not strong enough to change the balance of power within the rebellion. If international actors decide to establish a safe zone in the northwest, only a substantial outside peacekeeping force would prevent JN from further strengthening its position there. Such a force is not on the West's agenda at the moment, but that could change. And in that case, Turkey is much more likely to cooperate with fellow NATO countries in curbing al-Qaeda elements than with Russia. Another hope is that the rise of groups such as Jund al-Aqsa and the East Turkestan Islamic Movement could spark a new inter-jihadist war.