by Gilad Wenig
About the Authors
Gilad Wenig
Gilad Wenig is a research associate at The Washington Institute and managing editor of Fikra Forum.
Brief Analysis

A closer look at how the supreme military council will operate now that Field Marshal Sisi has thrown his hat into the presidential ring, including a chart illustrating the SCAF's likely new membership.

Update Feb 23, 2015: On January 31, 2015, two days after a cluster of violent attacks against security targets in the Sinai Peninsula, President Abdul Fattah al-Sisi chaired a meeting of the Supreme Council of the Armed Forces, during which he issued two consequential declarations. The first changed the force structure of the army by creating a “unified command” to oversee counterterrorism operations east of the Suez Canal. The second promoted Osama Askar, commander of the Third Field Army, both in rank and in title: he is now a lieutenant general--one of a handful in the armed forces--and in charge of the “unified command.” He will also retain his seat on the SCAF. Askar’s former deputy, Muhammad Abdullah, has been appointed commander, and Tarek Anwar Helal the chief of staff, of the Third Field Army.

Update July 31, 2014: In early July, the Egyptian military released a bulletin detailing personnel changes in the armed forces. Two well-established generals were removed from the Supreme Council of the Armed Forces and given new positions: Taher Abdullah, director of the Engineering Authority, and Saeed Abbas, commander of the Northern Military Zone. Abdullah is now an assistant defense minister, while Abbas is head of the infantry -- neither of these positions warrant a spot on the SCAF. They have been replaced by their deputies, Emad al-Alfi and Mohamed al-Zamalout, respectively. Also, according to reports, Salah al-Badri is now acting director of military intelligence. He previously served as head of security within military intelligence when Abdul Fattah al-Sisi was director. Click the graphic below to download the amended SCAF organizational chart. The original PolicyWatch appears thereafter, as published in March. 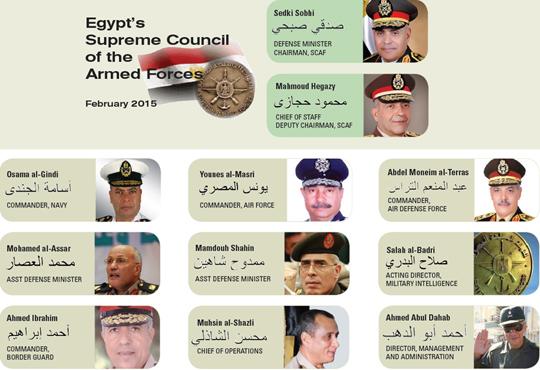 Today, following months of speculation, Field Marshal Abdul Fatah al-Sisi announced his resignation as Egypt's defense minister and his candidacy for president. Sedki Sobhi, former chief of staff under Sisi, has been promoted to colonel general -- one rank below field marshal -- and appointed as the new defense minister, while Mahmoud Hegazy, former director of military intelligence, has been promoted to lieutenant general and will be the new army chief of staff. The resultant restructuring of the SCAF will likely put some of Sisi's closest allies in key positions and should provide him with a strong base of military support and influence once he wins the presidency as expected.

The SCAF, Egypt's highest military body, was created by President Gamal Abdul Nasser under Law No. 4 of 1968 following the country's defeat in the 1967 war. Its official purpose was to coordinate the strategy and operations of the armed forces during wartime, which is why President Anwar Sadat later sought counsel from it prior to the 1973 war.

Yet the body took on a more ceremonial role following the Camp David Accords of 1978 and the Israeli-Egyptian peace treaty of 1979. In contrast to the National Defense Council, the SCAF's status was not enshrined in the constitution, and it seemed to convene only on anniversaries of past wars during the Hosni Mubarak era. Following the January 2011 uprising that ousted Mubarak, however, the SCAF's role fundamentally changed.

During the next thirteen months, mounting violence and repression undercut popular support for military rule. Following multiple delays and a series of mass protests, the SCAF agreed to hold parliamentary and presidential elections, with the Muslim Brotherhood emerging victorious from both. Days before it handed power to new president Muhammad Morsi, however, the council issued another constitutional declaration on June 18, giving itself legislative authority, virtual autonomy from the government, and veto power over the new constitution. By wresting power from the presidency before Morsi even took office, the SCAF and its chief -- perennial defense minister Muhammad Hussein Tantawi -- legally became the country's most powerful entities despite publicly receding from politics on June 24.

Two months later, after a deadly attack in Sinai on August 5, Morsi unexpectedly abrogated the June 18 declaration and assumed full executive and legislative power for himself. Seizing on popular discontent toward the military, he also removed Tantawi and army chief of staff Sami Anan, appointing Sisi -- the director of military intelligence and a protege of Tantawi -- as defense minister. Meanwhile, the top ranks of the military were purged, with approximately seventy generals forced into retirement and a younger generation of military leaders taking their place.

While Morsi's move established unprecedented civilian control over Egyptian politics, the military retained substantial autonomy over its own affairs. The December 2012 constitution, which a Brotherhood-dominated assembly rushed to completion, preserved the military's vast economic interests, empowered it to try civilians before military courts, and ensured that future defense ministers would be appointed from within the officer corps. The power of the generals further expanded in January 2013, when Morsi responded to protests by declaring a state of emergency in the three major Suez Canal cities, prompting the military to assume administrative control of Suez, Port Said, and Ismailia.

Over the next few months, as Morsi and the Brotherhood's popularity declined, reports began to circulate that the president was thinking about replacing Sisi to stave off a coup. Though unconfirmed, these rumors suggested that the military remained Egypt's kingmaker despite Morsi's electoral victory and political maneuvering. Following mass antigovernment protests that coalesced on June 30, the military issued an ultimatum demanding that Morsi respond to popular calls for new elections or a referendum on his presidency. When he refused, the military removed him from power on July 3.

Since then, Sisi and the SCAF have embraced a more public profile. While power technically resides with the civilian government that was appointed immediately following Morsi's ouster, the military remains the most pivotal player. This dynamic was clearly on display during the constitution-drafting process in late 2013. Although the army had an official representative on the drafting committee, Mohamed Magd El Din Barakat, and assistant defense ministers Mohamed al-Assar and Mamdouh Shahin participated in debates related to the armed forces, Sisi himself reportedly intervened to help broker a compromise when a deadlock occurred over articles relevant to the military's authority.

In addition, Sisi has repeatedly addressed the public regarding his political aspirations, especially since January. He has also spoken out on national development, the economy, and Egypt's security challenges. His resignation and decision to contest the presidency represent the military's ever deeper entrenchment in politics.

Today's announcements also come on the heels of two revealing developments. On February 24, interim president Adly Mansour issued Laws 18 and 20, which amended parts of Law No. 4 of 1968. The first new law stipulated that the defense minister must hold the rank of major general for at least five years and must occupy a central role within the armed forces prior to being appointed. It was released nearly a month after Sisi was promoted to the rank of field marshal and received SCAF approval to run for president, and mere weeks before he resigned. In retrospect, the government was seemingly anticipating Sisi's resignation and laying the legal groundwork for the SCAF to function under Sobhi, his nominated successor.

According to Law No. 20, which formalized the new SCAF's structure and mission, the council is to consist of twenty-five members, including the defense minister and chief of staff. The president and defense minister -- who will remain in office for two presidential terms -- can appoint members to the SCAF, and the defense minister will continue to chair the council unless the president attends a meeting. The secretary-general of the Defense Ministry -- currently Mohamed Farid Hegazy, a longtime military official -- now serves as the SCAF's secretary. More broadly, the law states that the SCAF will "set the goals and strategic tasks of the armed forces" in a way that helps achieve "the political interests…determined by the political leadership," in addition to overseeing all military- and defense-related matters.

Following the new laws, Sisi decided to reshuffle the SCAF on March 17, an unorthodox move given that such changes generally take place biannually in either January or July. He vacated three council seats by pushing Ibrahim Nasouhi and Mustafa al-Sharif into retirement and appointing Mohamed Arafat, commander of the Southern Military Zone, as head of the Inspection Authority. In other changes, Ahmed Wasfi, former commander of the Second Field Army, was named the new director of training; two former chiefs of staff now head the Second Field Army and the Southern Military Zone; and Khairat Barakat, former director of the Military Records Authority, is now director of officer affairs.

While these changes may seem operational in nature, they indicate a more strategic angle, particularly regarding the decision to give Wasfi a more central role. Some of Sisi's closest allies within the military establishment will hold key portfolios within the SCAF and the armed forces. Once he becomes president, he will be able to count on their support, compliance, and -- most important -- their sway.

In light of today's announcement and other information, twenty-five generals will likely hold seats on the SCAF (see chart). Based on Law No. 20, however, the defense minister may invite other experts to consult with the council or attend its meetings as he sees fit. So while the official SCAF membership may consist of these individuals, the law's flexibility leaves room for other officers -- active or retired -- to partake in the SCAF's deliberations, signaling the potential emergence of Egypt's newest men on horseback.

Gilad Wenig is a research assistant in The Washington Institute's Program on Arab Politics.