The Die Is Cast: The Kurds Cross the Euphrates

Although the latest Kurdish offensive runs the risk of spurring direct Turkish intervention, it could also help isolate Islamic State forces in the area from their capital, with significant implications for the rest of the combatants in Syria.

Since October, Islamic State (IS) forces in the eastern part of Syria's Aleppo province have been under pressure and compelled to fight on several fronts: against the Kurdish Democratic Union Party (PYD) and its Arab allies near the large Tishrin Dam; against the Syrian army and Russian aircraft around Kuwaires military airport and al-Jaboul Lake; against the rebel umbrella group Jaish al-Fatah (dominated by Ahrar al-Sham and al-Qaeda affiliate Jabhat al-Nusra) in the Azaz corridor between Aleppo and the Turkish border; and against the local population in Manbij, toward which the PYD and its allies are advancing. With the PYD seizing the only intact bridge across the Euphrates River for several hundred miles and the Syrian army potentially advancing further north or west, a large group of IS fighters in the Aleppo area could be left without land access to their capital in Raqqa. This prospect raises the question of who would benefit from eliminating IS on this front, and how. 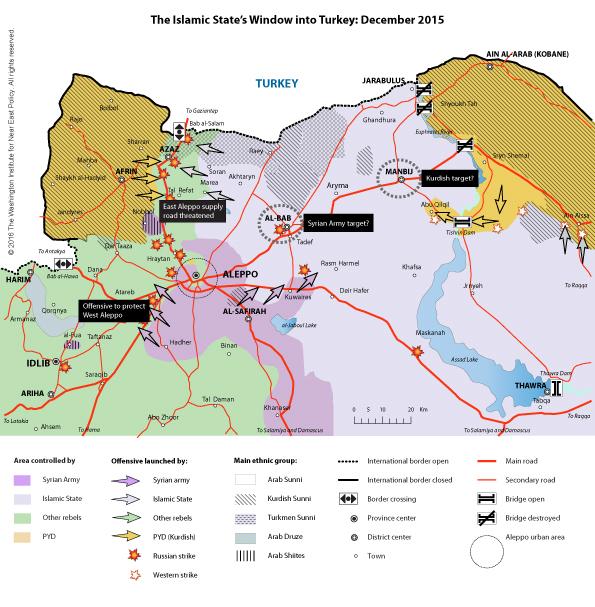 Although the current population of eastern Aleppo province is almost entirely Sunni, it is divided between various ethnic groups and further subdivided into tribes and clans that form the basic solidarity network in the countryside and cities. Arabs are the majority population, but large Kurdish and Turkmen minorities have resisted Arabization. The Circassians, however, are now assimilated: their identity has been progressively diluted since they were brought to the area by the Ottomans more than 150 years ago. Christians were numerous in the border towns of Jarabulus, Kobane, and Azaz until the 1950s, but they gradually left for Aleppo city and Damascus.

The area is also deeply rural, with the country's second-lowest human development indicators after the Euphrates Valley. It has seen strong population growth over the years, reaching an annual rate of more than 3 percent before the civil war. The area is dominated by agriculture and polarized by three urban centers almost devoid of industries: al-Bab, Manbij, and Jarabulus. The only industrial project is a cement plant built in 2008-2010 by the European company Lafarge.

Kurds consider large parts of this area as their own, including the long zone along the Turkish border -- not only the Kurdish-held cantons of Afrin to the west and Kobane to the east, but also the sections in between that are currently held by rebel groups or IS. The Kurds have similar views on Manbij, which lies well south of the border. Even if the population in some of these areas is mostly Arab, the PYD still considers them "historically Kurdish," seemingly basing their argument on notions from the Middle Ages and Salah al-Din.

Accordingly, the PYD aims to ensure territorial continuity between its Afrin canton and the rest of its self-proclaimed Kurdish region (called Rojava). The group has already annexed the predominantly Arab district of Tal Abyad further to the east, but it will be difficult to replicate that feat in more heavily populated districts -- as of 2010, more than a million people resided in the contested districts of Azaz, al-Bab, Manbij, and Jarabulus, compared to around 130,000 in Tal Abyad. Of course, hundreds of thousands of civilians have since fled to Turkey, but the Kurds would still face the challenge of integrating a large Arab population into Rojava -- not to mention the local Turkmen minority, which is under Ankara's protection.

Indeed, Turkey refuses to let the Kurds control the entire border and has warned several times that it will attack them if they cross the Euphrates, as it did in July when it shelled a PYD position near Jarabulus. On December 26, the Democratic Forces of Syria (an umbrella group for the PYD and its Arab allies) seized Tishrin Dam, then took the village of Abu Qilqil on the other side of the river three days later, bringing them only twelve kilometers from Manbij. Although that town is out of Turkish artillery range, Ankara could hit PYD forces there with other weapons. Doing so might be politically difficult at a time when the Kurds are fighting IS on Turkey's southern frontier, and when the border area that the PYD is trying to control is the main conduit for IS terrorists transiting north to Europe and volunteers coming south to join the group in Syria. Yet Ankara could still try to justify strikes against the Kurds given the PYD's close connections to the Kurdistan Workers Party (PKK). Indeed, short of a ceasefire with Ankara, Turkey will likely act to undermine any Kurdish gains in Syria.

Even so, the main impediment to the PYD's goals is the challenge of conquering and holding such a large Arab and Turkmen area. Would the local population accept the arrival of Kurdish fighters? The situation between Arabs and Kurds in eastern Aleppo province is certainly less confrontational than in northeastern Syria; the populations are more intermingled in the former area, and intermarriages are frequent. In addition, the PYD has formed a coalition with Arab militias, so local tribes may be more willing to pledge allegiance to the dominant political actor, just as they pledged allegiance to IS in the interests of the tribe.

WILL THE ISLAMIC STATE BECOME TRAPPED?

As the PYD and its allies seized Abu Qilqil, several sources indicated that IS might abandon Manbij, mainly because it faces major local hostility there and would be unable to defend the town against a Kurdish advance. On November 12, Manbij civilians protested the forced recruitment of young men to fight with IS on the Azaz front line. And on December 19, the group executed fourteen civilians out of fear that an uprising might be brewing.

Meanwhile, the PYD offensive has been supported by coalition airstrikes, indicating that the move was at least partly coordinated with the United States and was not a unilateral PYD decision. From that perspective, the advance toward Manbij could be part of a strategy to win back Raqqa. If Manbij falls, the capital of the "caliphate" could eventually become isolated from the rest of IS territory in Syria. All of the Euphrates bridges from the Turkish border south to Assad Lake have been destroyed or are controlled by the Kurds. If the PYD moves further south and the Syrian army launches an offensive toward al-Bab or Assad Lake, many IS personnel would be trapped in east Aleppo province.

WHO WOULD BENEFIT MOST?

To the west, the rebel groups controlling the Azaz corridor are currently on the defensive against IS, which has seized several villages in the area since September and is slowly progressing toward Azaz. The priority of the Saudi/Turkish-backed Jaish al-Fatah is to defend the supply road to eastern Aleppo against the Kurds in the west and the Syrian army in the south. Yet Russian aircraft are multiplying their raids on the corridor and weakening the rebel defenses, especially near the border crossing of Bab al-Salam, and losing this road would leave rebel units in the eastern districts almost completely surrounded by regime forces. Some assistance would still flow from the western Bab al-Hawa border crossing, but the Syrian army's progress around Aleppo threatens that route as well.

Therefore, the rebels would not be the main beneficiaries of an IS retreat in Aleppo province unless they were permitted to conduct attacks from Turkey. Ankara does not want to intervene directly in Syria, but it might allow rebel proxies to use Turkish territory as a launchpad for operations against IS in Jarabulus, for instance, with the implicit goal of preventing the Kurds from seizing the entire border. Of course, any such strategy would depend on whether the rebels are willing to fight IS, and able to do so effectively.

Meanwhile, the Syrian army's recent offensive on Kuwaires military airport was meant to save the garrison from the type of IS massacre that occurred at Tabqa, and to secure the Aleppo-Salamiya road that has been threatened by IS raids. Up until now, however, the army has had no intention of embarking on a wider campaign to recover lost territories in the east anytime soon -- its priority has been to eliminate rebel groups in and around Aleppo city. Bashar al-Assad and Vladimir Putin understood that they should not compete with the Kurds in conquering other areas, at least temporarily. Instead, they have facilitated Kurdish efforts by bombarding rebels in the Azaz corridor.

But if the latest Kurdish offensive succeeds, it could change the Syrian, Russian, and Iranian strategy in this area. By reaching Manbij, the Kurds could spur the Syrian army to launch an offensive against al-Bab northeast of Aleppo. The two forces could eventually meet up, trapping IS forces as described above. Although neither Assad nor the rebels seem well positioned to regain any ground lost by IS east of Aleppo, the local Arab population could be more receptive to them than to the Kurds.

FEW OPTIONS FOR THE WEST

Since the November terrorist attack in Paris, Europeans have insisted that the Islamic State's two-way route through Turkey be closed for good. In the absence of a moderate Arab Sunni force able to meet this demand, the West would prefer that the corridor be closed by Kurds rather than al-Qaeda-linked groups such as Ahrar al-Sham or Jabhat al-Nusra. The Kurds are eager to fulfill their dream of a united Rojava along the entire northern border, and to deny them at least some progress toward that goal would be to stop the only effective ally against IS in northern Syria. If the West does not work with them on this objective, it will push them into the arms of Moscow, which has made clear to the PYD that it is quite willing to help; in fact, there is already clear Kurdish coordination with Russian forces in northern Aleppo province.

At the same time, allowing the PYD to seize the entire border is unacceptable to Turkey, and the West needs Ankara's assistance on several fronts, including the refugee issue and the fight against IS. Therefore, if the PYD offensive continues toward Manbij and perhaps even further beyond Turkey's Euphrates redline, the United States and its coalition partners will need to be careful in determining whether, where, and how to support the advance -- and what to say in response to Turkish protests. For its part, Ankara will need to decide how far it is willing to go in enforcing that redline given the political and diplomatic risks of deeper intervention, especially against the only ground force making progress against IS in Syria. In that sense, the PYD's offensive is as clear a signal as Caesar's crossing of the Rubicon: the die is cast.