The Campaign to Retake Raqqa Is Accelerating

Kurdish-led forces are in good position for a final assault on the Islamic State's Syrian stronghold, and other actors seem ready to either support them or stand aside and benefit from their faster progress on the battlefield.

On February 4, the Syrian Democratic Forces -- a rebel umbrella group led by the Kurdish Democratic Union Party (PYD) -- announced the launch of a new phase in the effort to retake Raqqa. The goal of the SDF's latest operations is to cut communications between Raqqa and Deir al-Zour while continuing to advance on the Islamic State "capital" from the north and west. The announcement aligns with the new American administration's stated desire to accelerate the war against IS by quickly moving on Raqqa. In January, President Trump signed an executive order giving the Pentagon one month to present an action plan against IS. This may mean upping support for the SDF, who have been the terrorist group's main antagonists on the ground in Syria for months.

Given Raqqa's location on the north bank of the Euphrates River, the new offensive could cut the city off from the entirety of IS-held territory, not just Deir al-Zour. In September, a series of U.S. coalition air raids destroyed all remaining bridges crossing the Euphrates between the Iraqi border and east Raqqa; further raids destroyed the city's own two bridges on February 3. As a result, Raqqa will be surrounded when the SDF reach the Euphrates, with the river acting as a natural barrier trapping IS in the city. Of course, IS fighters could cross the river with boats, but they would be easy targets for U.S. aviation and could not carry heavy equipment.

In contrast, the SDF have barges for armored vehicles and, perhaps, U.S. helicopter support for troop-transport purposes, potentially allowing them to launch operations across the river if needed. The armored vehicles were provided by Washington via the Rmelan base in the northeast. 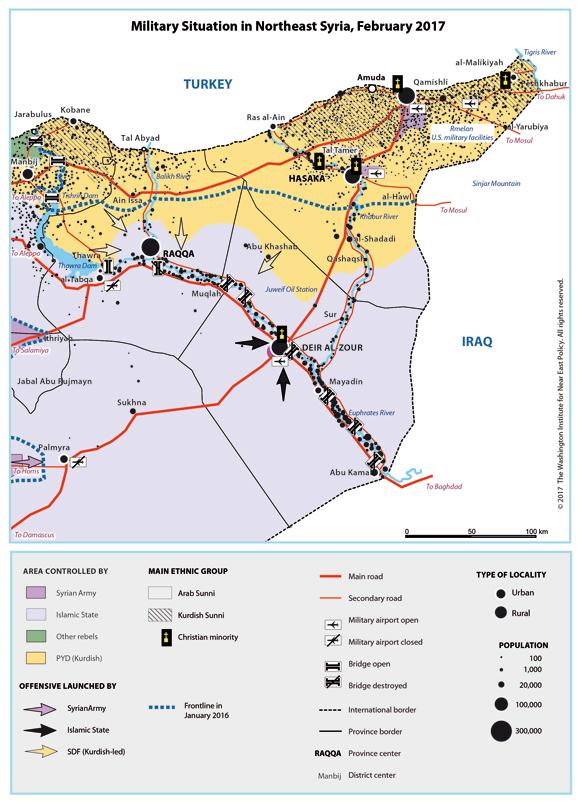 As part of this strategy, the SDF will no doubt attempt to seize the rest of Thawra Dam, as well as a second dam (Kadiran) ten kilometers downstream. The SDF already control the northern side of Thawra, so there is little chance of IS using it as an escape route across the river. Yet fully controlling both dams is still a prerequisite for assaulting Raqqa because of the threat that IS might destroy them and unleash a massively destructive flood downstream. On a more practical level, Thawra is the only intact crossing on the IS-held portion of the river, and it provides irrigation and electricity for the entire province and beyond. Once Raqqa is liberated, the new authorities will need to ensure the normal functioning of civilian life and prevent a humanitarian crisis that turns the local population against them; Thawra's continued operation is essential to this goal.

In conducting the new offensive, the SDF will benefit from several strategic advantages. First, IS forces are engaged on several fronts at once, including Mosul in Iraq, al-Bab to the west, and Palmyra and Deir al-Zour to the south. All other actors in Syria and Iraq are now united against the group. Although Russia, Turkey, Iran, the United States, and their local allies have not created a joint operations room to coordinate their actions, they have seemingly frozen their disputes with each other in order to focus on IS. In Syria, Turkey no longer lays claim to SDF-controlled Manbij. And in Iraq, the central government and the Kurds are no longer fighting over "disputed territories," at least for now.

Second, the SDF's successful January offensive west of Raqqa put them in prime position for the next push. From Tishrin Dam to Ain Issa, they took control of the entire right bank of Lake Assad within a month, advancing far beyond their January 2016 frontline and winding up within forty kilometers of Raqqa (see map). At a time when the Turkish army and its Free Syrian Army rebel allies have been stalled in assaulting al-Bab since mid-November, the SDF once again demonstrated their effectiveness on the battlefield. This stark contrast may convince the Trump administration that only the SDF are capable of taking Raqqa, regardless of how much Ankara might protest. The Obama administration reached the same conclusion during its last month in office, and the first U.S. deliveries of armored vehicles to the SDF were made on January 31 via Rmelan airport despite the change in administration. 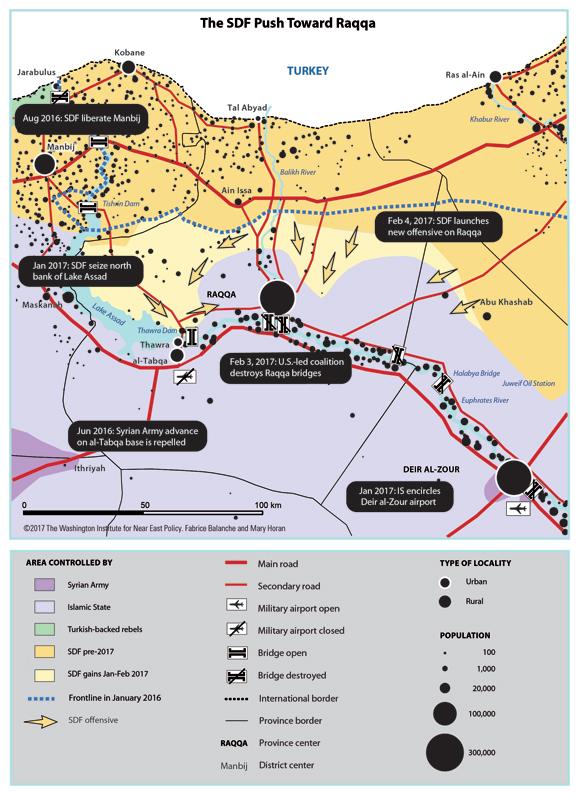 Third, the Islamic State's sharp decline and Washington's apparent boost in military aid have encouraged more Arab tribesmen to integrate into the SDF -- so many, in fact, that the force is now being called the "Syrian Arab Coalition" in some quarters. On December 8, U.S. spokesman Col. John Dorrian noted that some 13,000 of the SDF's 45,000 fighters were Arab. Other estimates are much lower, but if Dorrian's figures are accurate, they represent a significant increase since the SDF's creation in October 2015, when Arabs constituted only 5,000 out of 30,000 total fighters.

Fourth, local populations under IS control now seem to be rejecting the group in greater numbers. Initially, IS represented the return of a certain degree of security and normality for many Syrians (at least those who respected its often-brutal implementation of sharia). In 2014, for example, the group emptied wheat silos to supply cheap bread and imposed price controls on basic necessities. Today, however, the situation has deteriorated dramatically. IS has been unable to refill the silos it emptied, prices have risen, and its officials have proven to be just as corrupt as their predecessors. The group's finances are drying up as well, so some members who joined for pecuniary reasons are deserting. For now, a general uprising against IS remains unlikely given its continued reign of terror, but local Arab tribes can be expected to rally to the strongest party when the time comes.

ONE MORE STEP TOWARD A FEDERAL SYRIA?

Unlike in Iraq, Sunni Arabs in the Syrian portion of the Euphrates Valley are not particularly afraid of Iranian-backed Shiite militias taking over post-IS, or even a Shiite national army. Rather, their main concern is a prolonged Kurdish militia presence, which some tribal elements worry would facilitate a general Kurdish seizure of their lands.

Yet the population in this part of the valley is 99 percent non-Kurdish, so the PYD has little reason to annex it. The Arab tribes seem to realize this; they are reasonably certain that even if they support the current Kurdish campaign, local power will eventually return to them. In fact, this may be part of the PYD's plan in the Raqqa campaign: to help the Arab tribes liberate themselves from IS, give them a taste of local political independence, and thereby make them more sympathetic to Kurdish calls for a decentralized federal system in Syria. Toward that end, the PYD will likely aim to ensure that the Syrian army cannot return to the area even if Bashar al-Assad and his allies have the manpower, which at present they do not.

ASSAD'S WEAK SPOT IN THE EAST

The Syrian army is in trouble in Deir al-Zour, where the regime-held side of the long-besieged city has been battered by a renewed IS offensive since mid-January. The airport -- the sole lifeline for local regime forces -- is now cut off from the city, and efforts to reverse the situation have failed so far, including the enhanced use of Hezbollah fighters, helicopter-based special forces, and Russian bombing runs.

Even if the current assault is repelled, the regime needs a longer-term answer to the Deir al-Zour crisis. The city's fall would be a disaster for Assad -- the garrison would be massacred, and the civilian population (estimated at 93,000 by the UN) would suffer bloody reprisals as well. Accordingly, Assad and his allies have little choice but to tacitly endorse a U.S.-backed SDF offensive against Raqqa, if only in the hope that it will alleviate the pressure on Deir al-Zour. Yet they still need to prepare for the possibility that IS forces falling back from Raqqa might head south and overrun Deir al-Zour.

Deciding how to handle Raqqa's 300,000 civilians is the main challenge facing the SDF and its international backers. IS has repeatedly used civilians as human shields to deter aerial bombardment and prevent rigorous sieges. In Manbij, for example, the group barred civilians in their homes by mining the streets and shooting anyone who tried to flee. The SDF had to take the city house by house, sustaining heavy losses. In the end, many IS fighters were permitted to flee by mixing in with several thousand civilians leaving the city.

Therefore, one of the priorities in Raqqa is to encourage civilians to depart before the final assault. This means quickly reaching the city's outskirts and securing humanitarian corridors through which locals can escape, taking advantage of the disorganization created by the fighting. In addition, long-term camps will need to be established in the surrounding countryside to house people displaced by the battle, since they may not be able to return home indefinitely.

Once the main siege of Raqqa begins, Western rules of engagement regarding civilians will necessitate a long urban battle. In order to avoid a massacre and hasten the city's liberation, the SDF and their allies will likely have to negotiate the exfiltration of some IS fighters, as in Manbij.