The Battle for al-Bab Is Bringing U.S.-Turkish Tensions to a Head

Helping Erdogan take the city could greatly decrease the civilian death toll and preserve U.S.-Turkish cooperation in Syria, but Washington will still need to decide what to do with the Kurds, its other key ally against the Islamic State.

On January 5, Turkish president Recep Tayyip Erdogan threatened to close Incirlik Air Base to the international coalition against the Islamic State, citing the lack of U.S. support for his efforts to take the IS-held Syrian city of al-Bab. That battle will likely force Washington to make some hard choices about which ally is most important in the anti-IS campaign -- Turkey or the Kurds.

Since November 14, the Turkish army and allied Syrian rebel forces have been advancing on al-Bab. By December 10, they had entered the city's western suburbs, seizing Sheikh Aqil hill on December 20. Turkish forces likely assumed that this position would allow them to put IS under fire and compel the group to flee, much like it did during the battle for Jarabulus. 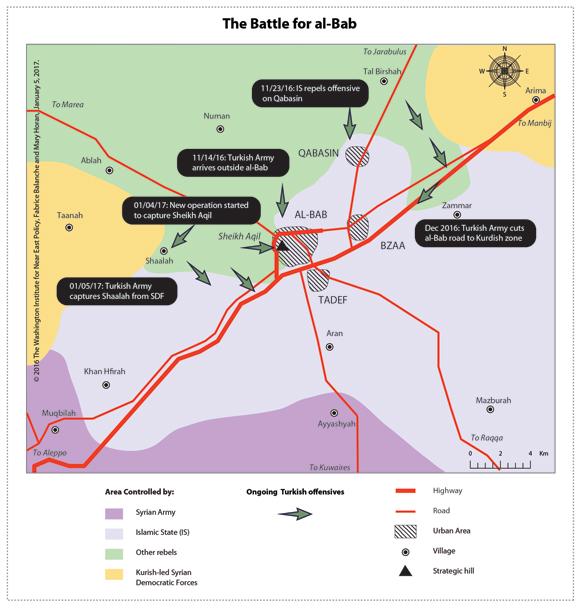 On December 22, however, IS retook the hill, inflicting heavy losses on Turkish and rebel forces. Fourteen Turkish soldiers were reportedly killed; IS also burned two Turkish military prisoners alive, and video of their grisly deaths was widely disseminated on social networks.

In response, Turkish jets heavily bombed al-Bab, reportedly causing the deaths of 72 civilians on December 23. In total, 173 civilians have been killed by Turkish-led operations against the city since November 14, according to the Syrian Observatory for Human Rights.

On January 4, Erdogan announced that the battle would be finished quickly, deploying troop reinforcements and additional tanks to the area. Turkish press reports have noted that 8,000 army troops are participating in the campaign, and their latest movements suggest Erdogan now intends to encircle al-Bab and cut off its links with the IS "capital" of Raqqa.

Yet this approach raises the question of whether and how Turkey will prevent further harm to civilians. When the Kurdish-led Syrian Democratic Forces (SDF) encircled and conquered Manbij in June-July 2016, they made careful attempts to minimize collateral damage against the city itself and its inhabitants, but they suffered heavy military losses in the process. The commander of the Turkish-backed militia Sultan Murad recently stated that only a few thousand civilians remain in al-Bab, but that claim rings false: before the Turkish campaign, the city had about 100,000 inhabitants, along with 50,000 more in the adjacent towns of Qabasin, Tadef, and Bzaa. And as in Mosul, Manbij, and Ramadi before, IS has prevented local civilians from fleeing, intending to use them as a human shields.

To avoid potential carnage, Erdogan will therefore need the precision of American airpower. The Russian air force has supported some Turkish operations around the city, but it is unclear if they have the local capability or willingness to conduct a comprehensive campaign of precision strikes.

The battle's outcome will likely affect Erdogan's credibility with the Turkish population. The main goal of his Syrian intervention is to prevent the unification of the two large Kurdish cantons along the northern border, and al-Bab is the key junction point between them. The campaign also plays to Turkish nationalism after the failed coup last July.

Moreover, Erdogan has warned that the Turkish army will retake Manbij from the Kurds after al-Bab. The SDF were supposed to leave the city last year, as Vice President Joe Biden promised Erdogan in August. Ankara may invoke this promise as the battle for al-Bab develops. 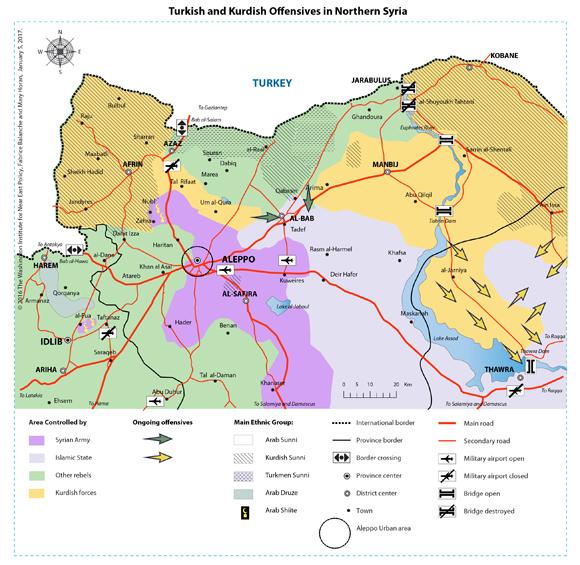 Yet telling the Kurds to leave Manbij could end their alliance with the United States -- a troubling prospect given their proven efficiency against IS, seen most recently in the successful SDF offensive toward Thawra Dam, the key to capturing Raqqa. What are Washington's options in this delicate situation?

Doing nothing means upsetting Erdogan, who would not hesitate to withdraw access to Incirlik Air Base. This would make the coalition's task more complicated, but not impossible; allied forces could strike the Raqqa region from bases in Jordan, Iraq, the Gulf states, or Cyprus (albeit with extra hurdles related to distance and route security). Yet Turkey will eventually take al-Bab with or without U.S. help, likely by shelling the city and otherwise causing heavy civilian casualties. Erdogan might then apply the same technique to Manbij if the SDF has not withdrawn by then, leaving Washington with the prospect of major civilian carnage, direct Turkish-Kurdish military confrontation, and further interference by the Russians, who would likely insert themselves as arbiters between Ankara and the Kurds.

Alternatively, if Washington supports Erdogan in al-Bab, it could help limit the death toll by precluding indiscriminate bombardment of civilians. Turkish soldiers and rebels would be assured of quality air support that hits the right targets, encouraging them to make progress in the ground battle against IS.

To be sure, this approach runs the risk of Erdogan building on a victory in al-Bab by attacking Manbij or even the SDF stronghold of Tal Abyad. The latter scenario could foreclose the possibility of Kurdish autonomy in Syria once and for all, even in divided cantons. Convincing the Kurds to leave Manbij voluntarily could avoid that outcome. And while the wider Kurdish goal of unifying their Syrian cantons could die with the fall of al-Bab, U.S. officials need to carefully consider whether supporting that Kurdish political dream is more important than maintaining the U.S. military alliance with Erdogan. Whatever the case, avoiding a Turkish-Kurdish confrontation in Syria is crucial to liberating Raqqa sooner rather than later, particularly if the United States wants to do so without being obliged to cooperate closely with Russia.