WASHINGTON, D.C. – The Washington Institute for Near East Policy presented its 2016 Scholar-Statesman Award to Gen. John R. Allen, USMC (Ret.), and Adm. James G. Stavridis, USN (Ret.), two men who have served on the frontlines of America’s fight against terrorism and extremism. The Institute conferred its most prestigious prize, now in its tenth year, at a gala dinner in New York City. The evening also paid tribute to Washington Institute Trustees Carol and Roger Einiger. View photos of the event.

“It is a privilege and an honor to present Gen. Allen and Admiral Stavridis with the 2016 Scholar-Statesman Award,” said Institute Executive Director Robert Satloff, who is the Institute's Howard P. Berkowitz Chair in U.S. Middle East Policy. “Gen. Allen and Adm. Stavridis represent a new breed of warrior who integrates scholarship and diplomacy into the practice of national defense.”
In awarding Gen. Allen the prize, Institute Trustee Lorraine Abramson remarked, "Gen. Allen rose through the ranks to lead some of the most difficult missions this country has ever undertaken. He is a man of great conviction who puts duty and country first. He is a national treasure." 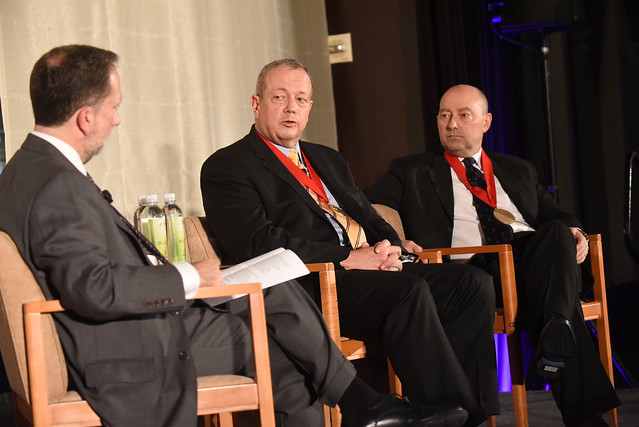 Following more than 30 years in the military, Allen most recently assembled and led the international coalition to destroy ISIS as President Obama’s Special Presidential Envoy. A 1976 graduate of the U.S. Naval Academy, Allen served as commander at every level of the armed forces. His deployments included the Balkans, Iraq, and Afghanistan where he commanded the 150,000-member NATO International Security Assistance Force. Allen is a member of the Institute’s Board of Advisors.

Stavridis, also a 1976 Naval Academy graduate, spent nearly forty years in the Navy, becoming the longest serving combatant commander in recent U.S. history. Stavridis commanded the Enterprise Carrier Strike Group from 2002-2004, conducting combat operations in the Persian Gulf in support of both Operation Iraqi Freedom and Operation Enduring Freedom. In 2009, as a four-star admiral, he was appointed head of U.S. European Command and, simultaneously, NATO Supreme Allied Commander (SACEUR). After retiring in 2013 he was named dean of Tufts University’s Fletcher School of Law and Diplomacy, his alma mater.

"A sailor by training and a scholar at heart, Adm. Stavridis learned the arts of diplomacy and communication through high-level assignments in the Middle East, Europe, and the Americas," said Institute Trustee Robin Chemers Neustein as she presented the medal to Admiral Stavridis. "It is a credit to his unique skills that he became the first Navy officer ever to serve as Supreme Allied Commander of NATO, the officer entrusted with the defense of our allies and interests in Europe."

Executive Director Satloff conducted a thought-provoking conversation with Allen and Stavridis on the many foreign policy challenges that will confront the administration of President-Elect Trump. In one exchange, Allen commented that throughout his military service, Arab governments never complained about U.S. ties with Israel and, in fact, were grateful to the Jewish state for providing stability in the Middle East. 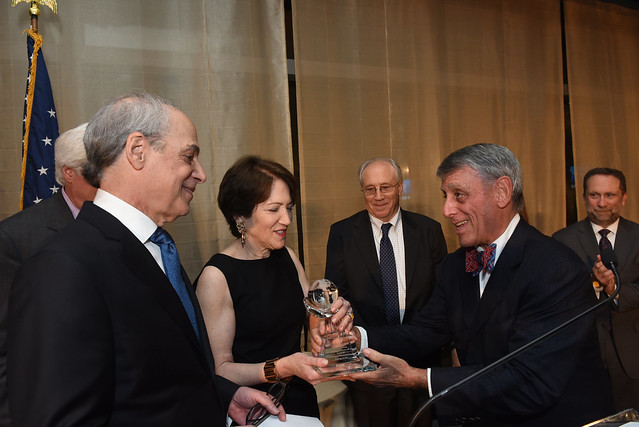 The Institute also honored Institute Trustees Carol and Roger Einiger who have been stalwart supporters of the Institute and other organizations. Carol, president of Post Rock Advisors, LLC, has served in a leadership role with the Rockefeller University, UJA-Federation of New York, the University of Pennsylvania, the Lasker Foundation, the Horace Mann School, and the New York Stem Cell Foundation. Roger, formerly of Oppenheimer & Co., has provided leadership to the Albert Einstein College of Medicine, Montefiore Medicine, UJA-Federation of New York, Big Brothers Big Sisters of New York City, and the Anti-Defamation League, among other groups.

“In honoring the Einigers, the Institute is paying tribute to two people who have been successful in business, successful in philanthropy, and successful as parents,” said fellow Institute Trustee John Shapiro.

At the event, the Institute announced the winners of its 2016 Book Prize, which recognizes outstanding new books in the English language that have illuminated the Middle East for American readers. Colin Shindler’s The Rise of the Israeli Right: From Odessa to Hebron was honored with the prestigious gold medal, Saeid Golkar was awarded the silver medal for Captive Society: The Basij Militia and Social Control in Iran and Ambassador Zalmay Khalilzad was bestowed the bronze prize for The Envoy: From Kabul to the White House, My Journey Through a Turbulent World. The Book Prize is generously supported by Institute Trustees Michael and Shelly Kassen.

About the Washington Institute: The Washington Institute is an independent, nonpartisan research institution funded exclusively by U.S. citizens that seeks to advance a balanced and realistic understanding of American interests in the Middle East and to promote the policies that secure them. Drawing on the research of its fellows and the experience of its policy practitioners, the Institute promotes informed debate and scholarly research on U.S. policy in the region.

Institute expert quoted by Arabian Business on the GCC's interests in the U.S. presidential election.

Institute expert quoted by NPR on the diplomatic normalization between Israel and the UAE.

Institute expert quoted by the Washington Post on Hezbollah's hand in the assassination of Saad Hariri.

Institute expert quoted by the New York Times on the visit of the Iraqi PM to Washington, DC.

Institute expert quoted by the New York TImes on the sale of F-35 jets to the UAE.