Who Will Take al-Bab?

The last remaining Islamic State stronghold in eastern Syria is poised to fall, and given the potentially major strategic implications for the Kurds, Turkey, the rebels, and other actors, one of them may act quickly to determine its fate.

After the Syrian cities of Manbij and Jarabulus were recently liberated from the Islamic State, observers began to focus on al-Bab, the last major IS-held town west of its proclaimed capital in Raqqa. Several actors are within striking distance of the city, so who will try to conquer it first? According to Turkish president Recep Tayyip Erdogan, Syrian rebels should free al-Bab with the help of the Turkish army, which is already inside Syria only thirty kilometers away. But military developments on the ground suggest a different scenario. On October 3, the Kurdish-dominated Syrian Democratic Forces (SDF) took Arima, an IS stronghold on the road from Manbij only twenty kilometers east of al-Bab, while other SDF units have advanced to twenty kilometers west of the city. Meanwhile, the Syrian army is only ten kilometers south. 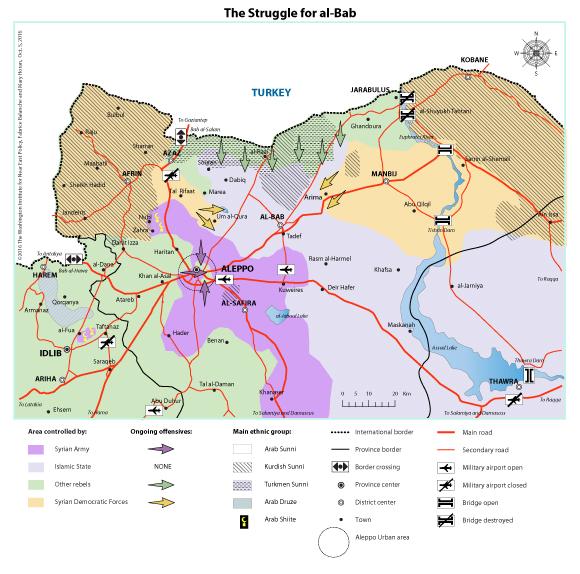 AL-BAB DURING THE WAR

In 2011, around 100,000 people lived in the al-Bab area. The city has not suffered from much combat during the war, making it a good destination for refugees from other parts of Aleppo province. Today, it has a Sunni Arab majority population with a Kurdish minority. As with most other parts of the province, the Assad regime's administrative personnel and police forces left the city in spring 2012 and rebel forces took over. In January 2014, IS seized al-Bab and has controlled it ever since.

Given the city's prewar history, a significant portion of the population may well sympathize with the Islamic State's radical credo; beginning in 2003, for example, many al-Bab youths went to Iraq to fight American troops. More recently, the group has faced less local opposition in al-Bab than it did in Manbij, where protests against IS conscription efforts in November 2015 provoked a cycle of rebellion and strong repression.

At the same time, IS does not seem particularly committed to retaining al-Bab. After a string of defeats on the Turkish border and in Manbij, al-Bab lost most of its strategic importance for IS, and outlets such as ARA News began reporting that the families of IS soldiers were departing for Raqqa, along with the group's local police department, training camps, military supply depots, and Islamic tribunal. IS now seems focused on defending Raqqa and the Euphrates Valley, especially given the reportedly imminent coalition campaign against its last major Iraqi stronghold, Mosul.

THE SYRIAN ARMY IS CLOSEST

Since November 2015, when they retook Kuweires military airport, the Assad regime's army forces have been only ten kilometers south of al-Bab. The regime has conducted airstrikes on the city and local IS positions but has not tried to take it over. Yet while the army's first priority is to reconquer Aleppo city, it may be able to move against al-Bab at the same time. From January to March, the army seized the area between Aleppo and Kuweires while simultaneously closing the Azaz corridor north of Aleppo with help from Shiite militias and Kurdish forces (it remains uncertain whether the Kurds were directly coordinating with the regime in any way or just fighting a common foe, but the results of their simultaneous offensives are clear). And since August, thousands more Shiite fighters have arrived in Aleppo to help the army retake the whole city. In addition, the pro-opposition Syrian Observatory for Human Rights and the pro-regime al-Masdar News announced on September 21 that some 3,000 Russian conscripts were present in al-Safira southeast of Aleppo, though the claim has not been confirmed since then.

The regime and its allies have every interest in taking al-Bab before Turkish-supported rebels do. Although Syrian and Turkish military officials met last month in Baghdad and came to an ''understanding'' about the Turkish role north of Aleppo, Damascus and Ankara are still in competition regarding the overall fate of northern Syria. If the rebels were to take al-Bab, they would not only pose a threat to Aleppo, but could also use the Islamic State's retreat as an opportunity to advance toward Raqqa and other parts of the Euphrates Valley. And in symbolic terms, letting the rebels take al-Bab when the army is only a few kilometers away would be a sign of weakness. Furthermore, the city could fall to the regime with relative ease, as happened in Palmyra when IS forces essentially abandoned the town shortly before the army surrounded it.

Alternatively, the regime might allow the SDF to take al-Bab given the shaky but ongoing modus vivendi they established some time ago. A small SDF corridor -- realistically, a Kurdish corridor -- extending from Manbij to al-Bab to Afrin could serve as a defensive barrier north of Aleppo, perhaps deterring pro-Turkish rebels from attacking the army. The regime might also believe it cannot easily hold al-Bab because the local Sunni Arab majority would view the army and associated militia forces as Shiite occupiers; in contrast, the SDF's mix of Sunni Arab and Kurdish fighters would probably be more accepted. In this scenario, one cannot rule out the possibility of Russia giving the U.S.-armed SDF the air support they need to advance on al-Bab. After all, facilitating the creation of a Kurdish corridor could prevent Turkey-backed Arab rebels from making further advances against IS, thus reducing Washington's incentive to support them.

Beginning in August, a coalition of Arab rebels called the "Euphrates Shield" quickly conquered Jarabulus and other border areas with help from the Turkish army, then progressed south slowly and carefully. The umbrella group has easily freed Turkmen villages, but it has encountered more difficulties when trying to free Arab villages. First, its forces number only 1,000 to 1,500 fighters. Second, apart from one Turkmen unit (the Sultan Murad brigade), most of the coalition's fighters are Arabs from Idlib province to the west, so they have no real links with the local Arab population. In contrast, IS has been recruiting and indoctrinating local fighters since 2013, and many of them are now keen on fighting to save their territory and avoid potentially bloody reprisals from Islamist rebel factions.

Moreover, the Euphrates Shield cannot move forward without artillery and air support from Turkey, and it is unclear how far Ankara is prepared to go in that regard. On the one hand, Erdogan claimed at the UN General Assembly last month that the group would seize around 5,000 square kilometers of territory in total (or 2,000 square miles) -- this is five times the area it currently holds, which would presumably mean taking al-Bab. Advancing on the city would also block Kurdish efforts to join their western canton of Afrin and their eastern canton of Kobane into a unified zone along the entire Turkish border; in fact, preventing that outcome appears to be Erdogan's main reason for entering Syria.

On the other hand, some Turkish officials have privately indicated that Ankara may not want to send troops deeper into Syria, perhaps because Erdogan and Vladimir Putin have apparently agreed on some implicit redlines about how far each will go. It seems unlikely that Putin would be pleased with a Turkish presence inside al-Bab and so close to Aleppo, which Russian forces are heavily committed to retaking. Al-Bab is also Moscow's best leverage on Turkey and the SDF.

The Syrian Kurdish Democratic Union Party (PYD), which dominates the SDF, still hopes to unify its border cantons into a self-proclaimed statelet that it calls Rojava. Accordingly, SDF fighters are moving on al-Bab from two sides. On October 3, they advanced 20 kilometers west of the city, their first move in that direction since Turkey's August intervention. To the east, SDF units from Afrin have advanced to a similar distance in an offensive bolstered by regime and Russian operations, as happened when the Kurds took the Azaz corridor in February and the Castello Road in July.

In October 2015, a PYD delegation in Washington noted that Russia had proposed to recognize Rojava and support Kurdish efforts to join Kobane and Afrin. What they really wanted was a similar promise from the United States, as well as more military support. Afterward, U.S. forces backed the Kurdish-led offensive on Manbij, which the PYD interpreted as American acceptance of a unified Rojava. Yet when Vice President Joe Biden visited Turkey this August, he stated that Washington's support for that offensive was conditioned on Kurdish SDF components handing Manbij over to their Arab allies after liberating it and then leaving the city. Although the PYD has made no public statements in response, Biden's remarks greatly angered them and will only heighten the prospect of Putin attracting them to his side.

As mentioned previously, the self-proclaimed IS "caliph" Abu Bakr al-Baghdadi may have an interest in abandoning al-Bab in order to concentrate his forces around Raqqa, since he knows that the survival of his territory is based on contradictions between his enemies. For some of these enemies, continued IS control over Raqqa arguably serves their near-term interests: it gives the PYD a strategic annuity to further its goal of establishing a unified Rojava, and it helps the Assad regime continue portraying the war as a fight against terrorists.

At the very least, if al-Bab must fall, it is in Baghdadi's interest to have the Syrian army and/or the SDF take the city rather than the rebels. The army is too weak to launch an eastward campaign against the Euphrates Valley any time soon; its first priority is to eliminate the rebels (an IS enemy) from western Syria. As for the SDF, they would be more preoccupied with defending an Afrin-Kobane corridor from Turkey than conquering Raqqa, a city they have no interest in.

Since 2011, most Western (and Russian) analysts have underestimated Iran and Moscow's support to Damascus and the resilience of the Assad regime, arguing that the Syrian army's manpower shortage would be an insurmountable handicap. Once again, however, the regime and its allies appear strong enough to launch further offensives, including against al-Bab. Their siege of Aleppo seems close to success given the recent breakdown in U.S.-Russian ceasefire talks, so more troops may soon be freed up for such offensives. To be sure, cities such as Hama and Damascus continue to face rebel threats, but the danger is probably not dire enough to draw massive forces away from the north in the near term. And if the army and its Shiite allies are not sufficiently strong to retake al-Bab, Assad and Putin's interests may still be served by allowing the SDF to conquer the city or even helping them do so. These scenarios leave Washington with two salient alternatives: support an SDF advance on al-Bab and risk alienating the Turks, or push for a strong offensive by Turkey-backed rebels to take the city quickly, which could damage relations with the Kurds, the principal U.S. partner against IS thus far.

Brief Analysis
The Tenacity of Young Iranians in the Protest Movement
Nov 29, 2022
◆