What Will Year Two of Russia's Syria Intervention Bring?

Moscow and Iran are already several steps ahead of Washington in shaping the war's potential endgame, so the next administration will need to be mindful of Putin's likeliest strategies and strongest levers if it wants a different outcome.

When Moscow deployed forces to Syria last September, the move appeared to be part of its wider global policy of restoring Russian power outside the old Soviet sphere, rebalancing its international relations to America's detriment, and increasing its presence in a region where the current U.S. administration seems eager to disengage. To succeed, this policy requires a military victory on the ground, which can only be obtained through collaboration with Iran and its proxies in Syria, negotiations with Turkey, and arrangements that limit the U.S. role in the war.

A JOINT PROJECT WITH IRAN

Iran and Russia need each other in Syria. An August 30 article in the London Daily Mail cited claims by "activists" that Iran controls around 60,000 Shiite fighters in Syria; whatever their true numbers, these forces are indispensable for launching offensives because Syria's regular army is worn out and unable to recruit effectively. Russia's powerful air force plays a crucial role in supporting these ground forces. As the recent fighting in Aleppo showed, Shiite militias, Iran's Islamic Revolutionary Guard Corps (IRGC), and Russian air power complement each other well in helping Bashar al-Assad's regime win battlefield victories.

In addition, Tehran and Moscow are more or less dividing Syria into two de facto zones of control: the southwest for the Iranians and the northwest and Palmyra for Russia. Although Iranian proxy forces are of course involved in the northwestern campaigns, Russia rarely intervenes in the south. The only major exception occurred this January, when it provided air support for the operation to retake Sheikh Maskin on the road to Deraa. This action worried Israel because Moscow had promised that its forces would not support pro-Iranian militias south of Damascus.

Other signs of cooperation include Russia launching air sorties against Syrian targets from a base in Iran last month, and its past firing of cruise missiles from the Caspian Sea across Iranian airspace. Although these incidents seemingly amounted to temporary shows of force, they highlight the potential for deeper military cooperation.

RELATIVE SUCCESS AFTER ONE YEAR

Thanks to Russia's intervention, the Assad regime regained confidence after the setbacks of spring 2015, when it lost Idlib and Palmyra. While the areas it has retaken are numerically small (less than 2 percent of the territory lost since 2011), they are strategically important. The regime's Alawite heartland and the Russian bases therein are now protected from rebel offensives, and opposition bases around Damascus have been progressively eliminated, such as in Daraya and East Ghouta. 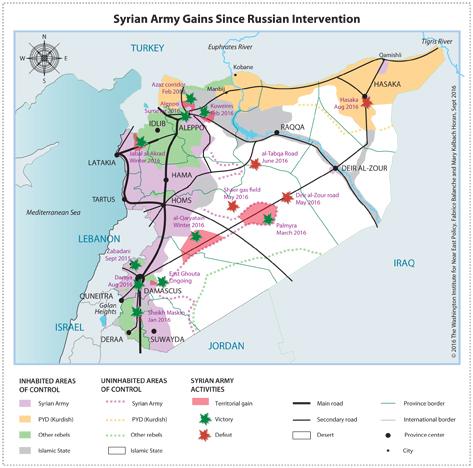 The battle for Aleppo is more complicated -- the countryside is largely hostile to the regime, and the rebels are receiving steady logistical help from Turkey. Moreover, the army is incapable of defending territory in places such as northern Hama, necessitating continuous assistance from the Russian air force and Shiite militias.

To fully protect the areas it considers strategically important -- Palmyra and the northwestern areas around Latakia and Aleppo -- Russia would need to send more ground forces. Until now, only about twenty of the approximately 5,000 Russian troops in Syria have been killed because they are rarely exposed to heavy fire. In contrast, several hundred of the 1,600 Russian mercenaries in Syria have died because most of them have been sent to the frontlines, according to Russian media outlet RBC. Therefore, any augmented deployments would probably involve mercenaries rather than regular soldiers -- Russian mercenaries are often more willing to fight than their underpaid army counterparts, and Moscow would not be obligated to officially acknowledge their sacrifice.

From a financial standpoint, the intervention is costing approximately $3 million per day, which remains tolerable for Russia. In fact, the exhibition of military equipment in Syria has helped win important new contracts for the Russian weapons industry, which began 2016 with a contract portfolio of $50 billion compared to $38.5 billion in 2011. This puts Moscow in second place on the list of international arms exporters, with 25 percent of the global market. In short, it will not be financial constraints that make Russia leave Syria.

Although Turkish president Recep Tayyip Erdogan quickly understood the danger that Moscow's intervention posed to his country, he also knew he could not confront Russia directly. Instead, he has chosen continual harassment via support for Syrian rebels. While the most recent rebel offensive in Aleppo did not change the power dynamic on the ground for long -- the city is once again besieged by the Syrian army -- it did force Moscow and Assad to divert resources they could have otherwise used to open the road between Palmyra and Deir al-Zour.

Through such actions, Erdogan hopes to reestablish balance in negotiations with Vladimir Putin, who has strong levers of his own against Turkey. From an economic standpoint, Ankara's goal of becoming an energy hub is now very much subject to Putin's whim, since Russia has steadily encircled major access points to Turkey.

Moscow could also decide to lend robust support to the Kurdistan Workers Party (PKK) as it did in the 1980s, when Ankara's armed conflict against the Kurdish terrorist group first began. In May, PKK fighters shot down a Turkish helicopter using an SA-18 MANPADS that came directly from Russia's arsenal, sending a clear message to Erdogan. Likewise, Putin would probably be more than willing to help the Syrian Kurdish Democratic Union Party (PYD) link their Afrin and Kobane cantons on the northern border. The United States is currently partnering with the PYD against the Islamic State, but it is unwilling to help them realize their Afrin-Kobane dream for fear of angering fellow NATO member Turkey. In contrast, Putin could readily offer air support and official recognition for their "Rojava" statelet. To avoid that outcome, Erdogan has to negotiate with Putin; the issue was probably one of their major points of discussion when they met on August 9.

Although there is little trust between the two presidents, they may be able to find a modus vivendi. Before launching its recent intervention in the Jarabulus area, Turkey discussed the matter with Russia, which in turn held off on targeting Turkish troops. The coming weeks in the Azaz-Manbij border region will show whether Ankara's understandings with Moscow are working.

WHAT TO EXPECT FROM YEAR TWO

Unless the U.S. presidential election brings a major change in Washington's Syria policy, Russia and Iran may be able to establish a condominium that controls nearly the entire country. In this scenario, Putin might grant the PYD a narrow corridor connecting Afrin to the rest of Rojava, which he could cut off whenever he wishes. If he does so, it would not be out of love for the Kurdish cause, but rather because such a move might halt the progress of Turkish-supported rebels in the north, thus protecting Aleppo and facilitating the retrieval of the Euphrates Valley, especially Raqqa. 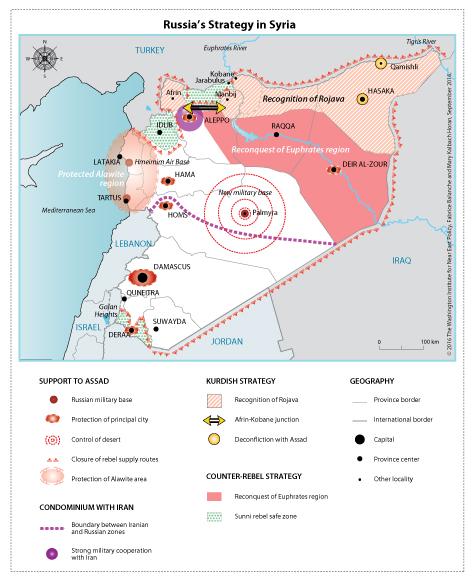 Now that Russia has air and submarine bases just outside Latakia (Hmeimim and Jableh, respectively) to go with its naval base in Tartus, the coastal Alawite heartland appears to be its favored region. For their part, local Alawites need Moscow's protection in the long run. Their population has been declining since the 1980s, and wartime deaths have accelerated the trend, so they will be in no position to resist future uprisings by the country's Sunni majority; even an Alawite rump state would need Russia's protection for demographic and other reasons.

Russia appears to be nurturing a similar dependency among the Syrian Kurds in the north. It can also be expected to reinforce its presence in Palmyra, which is the ideal place to install a radar base covering all of the Middle East.

To be sure, Saudi Arabia will keep pushing back on these goals, since it cannot tolerate an Iranian victory in Syria. Yet the efficiency of Saudi support to the rebels will depend on the behavior of Turkey, their main supply route, so the cards are seemingly in Erdogan and Putin's hands. Will Ankara be satisfied with an area of influence in northwestern Syria, which has a significant Turkmen minority population? Or will it take a more active role in opposing a Russian-Iranian condominium?

To reverse the current trends, the next U.S. president would have to play a more active role in Syria, since Russia and Iran are already several steps ahead. Washington's recent ceasefire deal with Russia will not change that balance. The Obama administration has a strategy of deconfliction in Syria because it does not see any other alternative, even if two major U.S. geopolitical adversaries are empowered as a result. As Secretary of State John Kerry told NPR this week: "What's the alternative? The alternative is to allow us to go from 450,000 people who've been slaughtered to how many thousands more? That Aleppo gets completely overrun? That the Russians and Assad simply bomb indiscriminately for days to come, and we sit there and do nothing? That's the alternative to trying to get this done, if America is not going to go in with their troops -- and America's made the decision we're not going in with our troops. And the president's made that decision."