Water Issues Are Crucial to Stability in Syria's Euphrates Valley

Regardless of who drives the Islamic State out of the Euphrates Valley agricultural zone, they will need to address the legacy of failed regime irrigation policies that are once again creating tension among local tribes.

Military movements in eastern Syria suggest that a major offensive will take place this year to eradicate the Islamic State (IS) presence in the area. The Syrian army is advancing toward Deir al-Zour and Tabqa with the help of Russian aviation, while U.S.-supported Kurdish and Arab fighters under the flag of the Syrian Democratic Forces (SDF) are closing in from the north (see PolicyWatch 2614, "The Battle for Deir al-Zour: A U.S.-Russian Bridge Against the Islamic State?"). Meanwhile, the Arab tribes living under IS rule in the Euphrates Valley have pledged allegiance to the group for now, but they would likely abandon it if outside forces posed a serious threat.

Accordingly, the time has come to prepare for "the day after IS" in the Euphrates area, particularly regarding the various economic issues that will be key to local political stabilization. Regardless of who controls the area next -- whether the Assad regime, the SDF, or other players -- they will face the problem of water scarcity, which has long driven the area's political and economic dynamics.

STATE IRRIGATION AS A MEANS OF CONTROL

The portion of the Euphrates Valley between Assad Lake and Abu Kamal is an arid zone where agriculture is difficult without irrigation, since annual rainfall is usually less than 10 inches. Nevertheless, the most recent Syrian agricultural census (2004) showed that 46 percent of the population in Raqqa province and 43 percent in Deir al-Zour province worked in agriculture -- more than twice the nationwide average of 20 percent. And the actual share of the local population who derive their main income from agriculture is even higher because many farmers prefer to define themselves as "civil servants" or "housewives" instead of fellah (peasant) or muzaree (farmer), terms that have pejorative connotations in the area.

These figures are more understandable when one considers that oil production has created very few jobs in the Euphrates Valley. Most of the workers in the state-owned oil industry hail from the regime's Alawite heartland and other western provinces, and refinery operations are located elsewhere (mainly Homs and Banias). Given this economic isolation and other factors, many Euphrates Valley residents considered themselves an internal colony of Syria well before the current war. 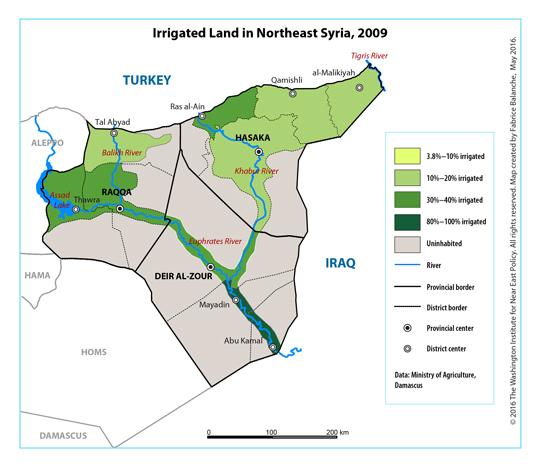 Their main complaint against the central government has been its constraints on agriculture, particularly its mandatory production plans and quasi-monopoly on water resources. In the provinces of Raqqa, Deir al-Zour, and Hasaka, the ministries that supervise irrigation and agriculture have long forced farmers to enroll in programs obligating them to produce only cotton, cereals, and sugar beet. The state also supervised every aspect of the market through bureaucratic public companies, from seed distribution to commercialization. In fields irrigated by the Euphrates Valley dams, farmers enjoyed almost free water, but it was delivered according to a government schedule that was only suitable for the crops that the regime mandated be grown, making agricultural diversification impossible. In the minds of Baathist politicians, however, the large dam and irrigation projects were a means of domesticating not only the Euphrates River, but also the tribes that lived along it. When water was plentiful and fields sufficient for every family, social peace reigned, but the situation deteriorated rapidly in the past decade, contributing to the 2011 uprising. 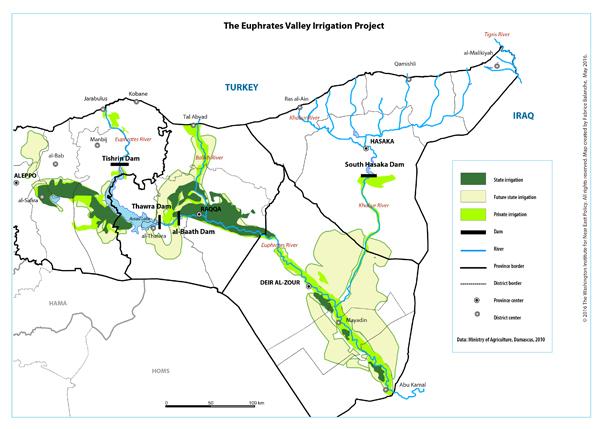 Between 1960 and 2010, the population of Deir al-Zour and Raqqa provinces increased from 400,000 to 2,000,000, and farm size naturally decreased with this rapid population growth. At the same time, the regime's ambitious plans to extend irrigated land outside the Euphrates Valley were never carried out due to lack of funds and water shortages. As a result, illegal wells and pumping multiplied, with some tolerance from the government for political reasons or simply because of corruption. Authorities were more flexible with Arab tribes along the Euphrates than with Kurds in Hasaka province, where irrigated areas were reduced considerably due to lack of state investment and a failure to modernize irrigation techniques.

The drought of 2007-2010 accelerated these problems, especially because it occurred at a time when the state was reducing its subsidies, tripling the price of fuel, making individual irrigation extremely costly, and imposing water savings through a restrictive irrigation modernization plan. These measures were largely ineffective because they were formulated under emergency circumstances and implemented within a very corrupt environment. For example, subsidies were often hijacked by rich farmers with the complicity of officials, while small farmers were threatened with penalties because they continued to irrigate in a traditional way. 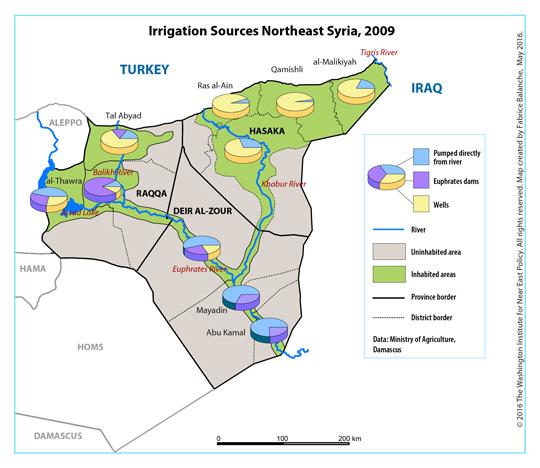 State irrigation has been poorly managed from a technical standpoint as well. Open irrigation canals do not allow the use of sprinklers or drip methods due to lack of pressurization, causing a shameful waste. For instance, if a farmer using this gravity feed method wants to get one cubic meter of water to his crops, he must draw seven times that amount from whatever source he is using. With a sprinkler system, however, he would need to draw just two cubic meters, and with a drip system just one. But what incentive do farmers have to acquire expensive equipment if water is almost free in state-irrigated land? They have more reason to use such water-saving technology in farms that use wells, where low water tables have forced many to abandon cost-prohibitive pumping and leave some fields fallow. Between 2001 and 2009, agricultural land decreased in areas irrigated by wells (e.g., Thawra district, Tal Abyad, and Hasaka province) but expanded in the Euphrates Valley, where well use is low.

Given this series of mistakes and the ever-looming challenge of scarcity in arid regions, resolving water issues in the Euphrates Valley will be difficult without causing public discontent. Yet the regime's approach to irrigation clearly failed and was an important contributor to the current uprising. 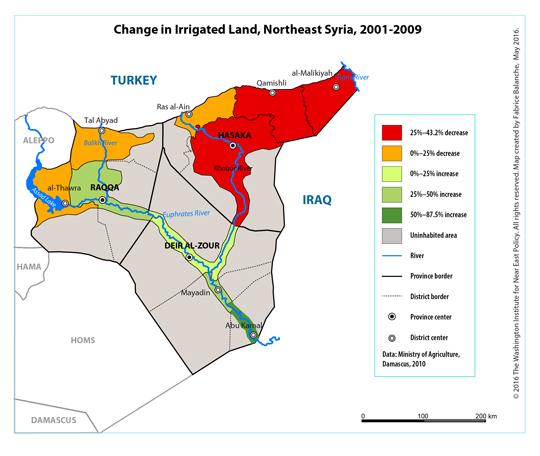 IRRIGATION UNDER THE ISLAMIC STATE

Since establishing control over most of the Euphrates Valley during the war, IS has created a Department of Agriculture comparable to the regime's bureaucracy. It mandates which crops can be grown, uses similar irrigation management schemes, and imposes heavy taxes on farmers. Thanks in large part to the group's lack of expertise, however, irrigation services have deteriorated sharply compared to the prewar period, making the collection of taxes by the IS "Zakat Department" unbearable. The lack of water in previously state-irrigated land has spurred many farmers to drill unregulated wells. This in turns means increased pumping, which is costly under normal circumstances but even more so now because coalition bombing of oil facilities has made it difficult to obtain the fuel needed to power the pumps. Above all, local farmers lack fertilizers and pesticides, which have become rare and expensive because they can only be procured from the government zone through smugglers.

As a result of these problems, agricultural yields are decreasing sharply, and IS has been unable to refill the wheat silos it previously emptied in order to win the population's support. If the current circumstances persist, the next inevitable drought cycle will be catastrophic.

The challenge of fixing irrigation problems in the Euphrates Valley should be anticipated before eradicating IS there. A large modernization plan for irrigation and agriculture is essential to stabilizing the valley, but whoever is responsible for this effort will face the same physical and social constraints. Local water resources are inherently limited and will likely become even scarcer in the coming decades. Some waste can be reduced by using modern irrigation techniques and abandoning water-intensive crops such as cotton, but such efforts require great discipline and a high level of development that is currently incompatible with the valley's tribal society. Therefore, the authorities who take the Islamic State's place will face a cruel dilemma, because if nothing concrete is done soon, the scarcity of resources will exacerbate tribal competition for them.

Restoring stability in the valley will be much easier if Turkey respects the international agreement for sharing Euphrates water with Syria. The agreed minimum flow is 500 cubic meters per second, but the current level seems to be significantly lower today, and neither IS nor the Assad regime is in a position to protest. Accordingly, the water issue will give Ankara much leverage over whoever controls the Euphrates Valley.