Syria's Kurds Are Contemplating an Aleppo Alliance with Assad and Russia

The PYD will not hesitate to cooperate with Damascus and Moscow in the north if Turkey and the United States continue prohibiting the unification of Kurdish enclaves.

Despite repeated Russian statements to the contrary, Moscow's most pressing goals in Syria are safeguarding Bashar al-Assad's regime and expanding its own military presence on the Mediterranean coast, and it can meet these goals even if Damascus and its allies are unable to regain territory outside the Alawite heartland. Yet if Vladimir Putin wants to be at the center of the Syrian chessboard, he will need to push his pawns further into the country's interior. In particular, Aleppo could be his next target because all of the war's major players are currently vying for control of the key northern metropolis. Losing the city would be a major political and strategic setback for Assad, weakening his regime in future negotiations.

Currently, the Syrian army still controls a third of Aleppo, which is connected to the rest of the government-controlled zone by a narrow road. But this corridor is being squeezed by the Daesh/ISIS on the east and al-Qaeda affiliate Jabhat al-Nusra on the west. To win the battle for Aleppo, Assad will therefore need to cooperate with the Democratic Union Party (PYD), the Syrian franchise of the Turkish Kurdistan Workers Party (PKK). The PYD is eager to connect its cantons around Kobane and Afrin and open a corridor to Sheikh Maqsoud, the Kurdish district of Aleppo. An October 1 al-Monitor interview with PYD leader Salih Muslim suggests that the group may be seeking a strategic alliance with Assad and Russia in order to achieve that goal.

Aleppo is a city divided along sectarian and social lines. When the war began, more than two-thirds of its 2.5 million residents were Sunni Arabs, followed by Kurds (20-25%, many of them Arabized) and Christians (10%, about half of them Armenian). The city also had a small Turkmen community hailing from the Azaz area, as well as tens of thousands of Alawites -- mainly civil servants and military personnel from the coastal region. 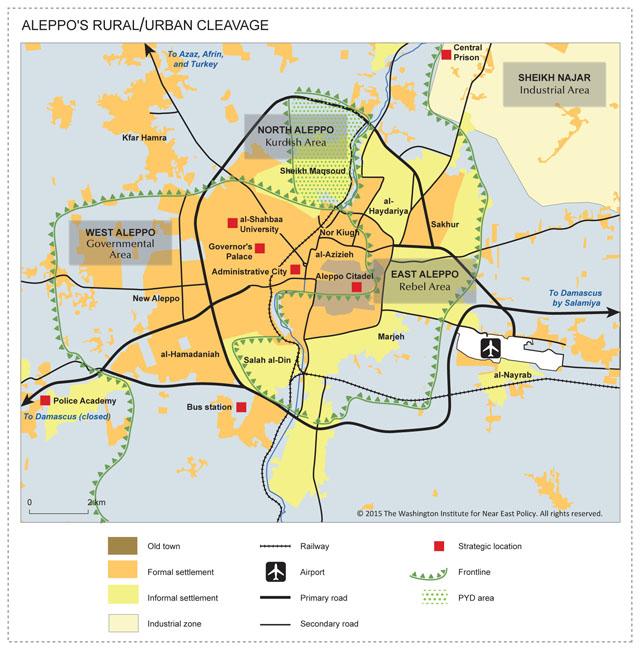 But the main cleavage in Aleppo is social, not sectarian -- between the urban and rural population, which partly means between the rich and the poor. Western districts have been populated by urban dwellers for several generations, while the eastern neighborhoods and the Kurdish area are informal settlements hosting rural dwellers. The original urban residents despise the rural people who have come to settle there, accusing them of attempting to ruralize (inrifyeh) the city, which in their view would effectively destroy Aleppo.

As for the rural camp, clan solidarity in the eastern and northern districts remains as strong as it was in the countryside. Local authorities have also delegated police power to clans that suffered heavy losses when the rebels besieged Aleppo in July 2012 (e.g., the Berri clan). Meanwhile, rebels from the countryside have found a good home in the informal eastern district settlements, but they have clashed with Kurdish militias in Sheikh Maqsoud and met with hostility from the formal, wealthy districts that supported the Syrian army against the rural invasion.

Outside Aleppo, the main division in rural northwestern Syria is between Arabs and Kurds. Religious minorities were virtually absent from this area before the war, and today there are only four Shiite localities (al-Fua, Kefraya, Zahra, and Nubl, all surrounded by rebels), a small Druze community in Jabal al-Summaq (which is keeping a low profile), and a Christian village, Yacoubiyah (now abandoned). Afrin and Kobane districts are fully Kurdish, and there are numerous Kurdish villages between these two strongholds (though most of them were given Arabic names during the Baathist epoch of Arabization, like the Turkish villages around Azaz).

In the first months of the uprising, the regime lost control of most of the northwest, and the population remains hostile to Assad with the exception of the Shiite and Christian enclaves. Regime forces managed to keep some strategic towns (Idlib, Jisr al-Shughour, and Ariha) until spring 2015 thanks to heavy troop concentrations, as well as fissures within the opposition. But once various rebel factions unified into the "Army of Conquest" (Jaish al-Fatah), Assad was no longer able to control cities in Idlib province, and Aleppo is now almost completely surrounded. 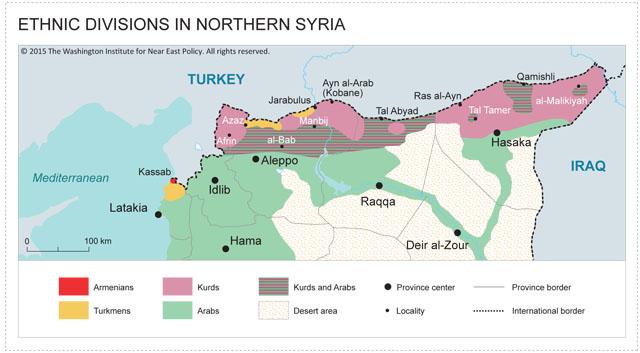 Given the hostile environment in the northwest, Assad has chosen the scorched-earth option to overcome the insurgency. Shelling rebel districts in Aleppo is designed to scare civilians into isolating the fighters, so that they can be removed as in Homs. Over time, the population in the city's eastern districts has declined from more than one million to tens of thousands. Yet this counterinsurgency strategy based on shelling and expulsions has failed because the rebels have captured all the surrounding small towns of Idlib province and now pose a serious threat to the Syrian army in Aleppo.

The army has also been forced to fight Daesh forces threatening its land and air connections. Kuwaires military airport has been under siege for months and may suffer the same fate as Abu Duhur and Tabqa, where Daesh fighters slaughtered Alawite military personnel and widely disseminated footage of their deeds on the Internet.

Therefore, one of the priorities for ongoing Russian airstrikes will likely be to support Assad's forces in relieving this base by directly hitting Daesh forces. This would also help justify the intervention as a whole, which Moscow has publicly depicted as a counterterrorism campaign targeting ISIS. Yet Putin may go further in the Aleppo area, striking Jabhat al-Nusra and Ahrar al-Sham, the two pillars of Jaish al-Fatah, which are backed by Saudi Arabia, Qatar, and Turkey. That could be enough to give the rebels some new redlines: for example, "cease all offensives on the regime-held parts of Aleppo or else." But recapturing the entire city and its environs would require closing the Turkish border so that the rebels can no longer receive logistical support. That duty could be entrusted to the Kurds, who have already connected their eastern border enclaves into a territory they call "Rojava."

To be sure, Turkey has told the PYD that it cannot expand this territory further west than Kobane, seemingly ruling out a bridging move toward Afrin. Any such Kurdish offensive might also break the PYD's strategic agreement with the United States, which does not want the group to seize Jarabulus and Azaz. Yet it is difficult to believe that the Syrian Kurds will stick to the status quo in the Aleppo area indefinitely. Many of them believe they are at an historic moment and are intent on seizing the opportunity to build a state by unifying all Syrian Kurdish territories. Because they consider the area between Afrin and Kobane to be historically Kurdish, they believe it should join the Rojava. 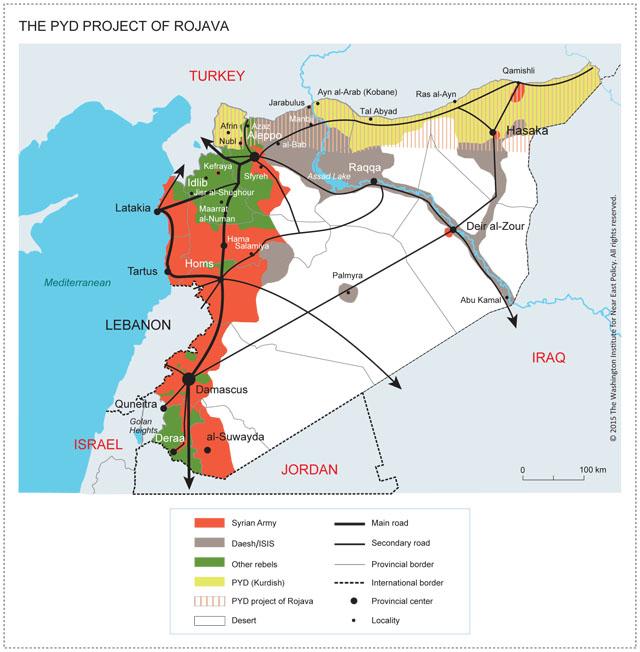 Recent declarations by the PYD's leader not only reiterate these Kurdish goals, but also signal that the group is willing to ally with regime and Russian forces in order to meet them. As he told al-Monitor, "We will fight alongside whoever fights Daesh." Again, Turkey has prohibited the PYD from advancing on western Kobane as if it is a Daesh territory, and the Turkish project of establishing a buffer zone in this area interferes with the Kurdish Rojava project. Yet Salih Muslim cast doubt on the efficacy of this prohibition: "Should Turkey attempt to intervene, then they will. Russia has a joint defense agreement with Syria. They will prevent Turkish intervention not to defend us [Kurds] but to defend Syria's border."

Meanwhile, on September 27, PYD forces from Sheikh Maqsoud cut the only road between Aleppo and Turkey through Azaz. Does the group seek to open a road to Afrin, and will it cooperate with the regime to do so? Kurdish forces have already helped the Syrian army and Hezbollah on two fronts: surrounding rebel forces in east Aleppo and rescuing the encircled Shiite towns of Zahra and Nubl. Hezbollah is currently negotiating with the opposition on evacuating the area's other Shiite villages (Kefraya and al-Fua) in exchange for the release of rebel fighters; a ceasefire is in place, and some 10,000 civilians have already left. Once that process is complete, Hezbollah will have more free hands to help with Nubl and Zahra.

More broadly, looming political uncertainty in Turkey and the expanding Russian presence in Syria may prompt the Kurds to gamble on making a move, perhaps even goaded on by Moscow. In that scenario, the Kremlin -- not Washington -- would be Ankara's most indispensable interlocutor for curbing Kurdish ambitions. As for Assad, he knows that his legitimacy as president of Syria depends on controlling not only Damascus, but also Aleppo, because contemporary Syria has been built on the union of these cities within the same state.

Western leaders have two options for responding to Russia's intervention and its attendant ripples: do nothing and pray that Syria becomes Putin's Afghanistan, or play by his rules and secure their own place in shaping the future Syrian peace process. In either case, they need to acknowledge that the PYD will not hesitate to ally with Russia and Assad if that is its only path to a continuous territory in the north. Syrian Kurds have been told repeatedly that the West will not allow them to gain more territory, and they fear a potential anti-Kurdish offensive backed by Turkey, so for now they are looking favorably on the Russian intervention. Moscow may not be able to help Assad reconquer the entire north, but it could certainly prevent the Sunni Arab rebellion from threatening an expanded Kurdish Rojava.

Accordingly, the United States and its partners face a decision: maintain the ban on Kurdish expansion or support the PYD's bid to join Afrin with Kobane. The latter course would help weaken ISIS by cutting off its access to Turkey. Moreover, the Kurds are the only force on the ground that will back Western efforts against the Daesh, so keeping them in the U.S. camp would seem to be crucial.

Fabrice Balanche, an associate professor and research director at the University of Lyon 2, is a visiting fellow at The Washington Institute. The original maps adapted for this article were created by him.