The Struggle for Azaz Corridor Could Spur a Turkish Intervention

As various forces converge against the main rebel supply line in northern Syria, Russia's wooing of the Kurds could make Turkey rethink its approach.

For some time, Syrian rebels have been struggling to hold onto a narrow but crucial strip of territory between the northern border town of Azaz and the contested city of Aleppo. This corridor is the lifeline for antiregime forces in the north because it is their land bridge to Turkey. Yet it now faces imminent threats on several fronts: from the east by the Islamic State (IS), from the west by the Kurdish Democratic Union Party (PYD), and from the south by the Syrian army and its allies.

In fact, the Azaz corridor has become the epicenter of the war, with hostilities intensifying throughout the area over the past two weeks. Everything seems to indicate that a Kurdish offensive supported by Russian aviation is underway to the west, coordinated with a developing campaign by the Syrian army and proxy militias on the outskirts of Aleppo. Meanwhile, Russia is apparently not taking action against the IS forces pushing into the area from the north. And the prospect of direct Turkish intervention looms over the fighting, especially if the corridor should fall. 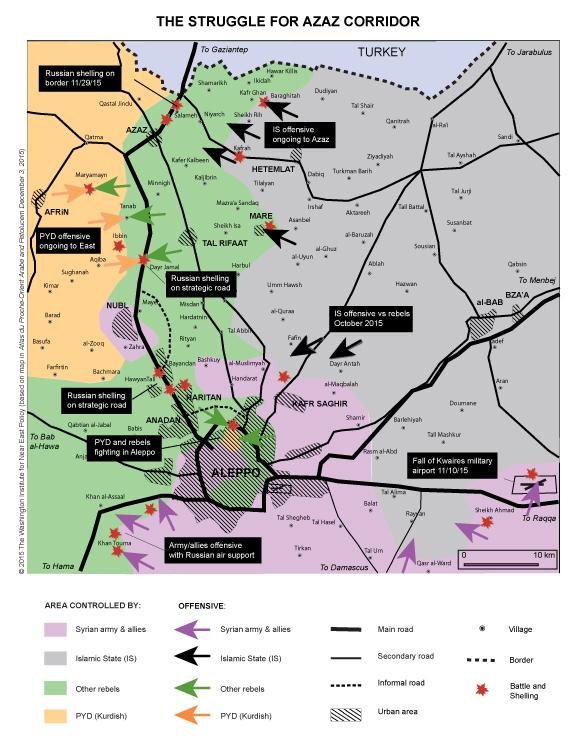 A STRATEGIC ROAD TO ALEPPO

The Azaz corridor connects the eastern part of Aleppo, currently under rebel control, with Turkey. The northern border post of Bab al-Salam supplies the rebellion with humanitarian aid and logistical support. In February, the Syrian army tried unsuccessfully to cut the road between Baskuy and Zahra, but rebel reinforcements coming from Turkey swept Bashar al-Assad's forces aside and launched assaults on Idlib, Jisr al-Shughour, and Ariha, all of which fell quickly. Even the regime-held western part of Aleppo was under threat until the Russian intervention came to relieve the defenders.

Currently, the tens of thousands of civilians and fighters remaining in eastern Aleppo have been devastated by bombings and are surrounded by the Syrian army. Recovering the entire city and its environs is crucial for Assad, and that goal once again requires cutting the supply road of Azaz. In that scenario, the surrounded rebels in Aleppo would be forced to evacuate the city, as happened in Homs. To be sure, ousting the rebels will be difficult -- although only five kilometers separate the main regime-controlled Shiite pockets northwest of Aleppo (Bashkuy and Zahra-Nubl), the area in question is a dense urban zone, so the army would likely be forced to go house by house. Moreover, that small corridor is of high strategic value to the rebels, so it is very well defended. The Russian air force is intensively bombing rebel positions in Anadan and Haritan, suggesting that a general offensive is brewing. Yet if the regime and its Shiite allies want to succeed this time, they will need the PYD's support.

FROM AFRIN TO KOBANE

The PYD is present in the mountainous Kurd Dagh area around Afrin, whose entire population is Kurdish. It is also present in the Sheikh Maqsoud district north of Aleppo, a large informal suburb. The Kurds hope to link Kobane with Afrin in order to make their "Rojava" (the PYD's name for Kurdish territory in Syria) a single entity. But Turkey strongly objects to this objective. It complained about the PYD's annexation of Tal Abyad last spring and bombed Kurdish forces opposite Jarabulus in June. Ankara is adamant that the PYD not cross the Euphrates River to seize Jarabulus, even though the city is under IS control.

For its part, the PYD has complained of being harassed by Jabhat al-Nusra (JAN) and Ahrar al-Sham, the two leading militias in the rebel umbrella group Jaish al-Fatah, which controls the Azaz corridor. In recent weeks, these brigades launched raids toward Afrin, temporarily seizing the village of Maryamyn. Sheikh Maqsoud district is also under fire from rebel groups who want to eliminate the Aleppo Kurdish pocket and launch an offensive into the northwestern districts still held by the Syrian army.

A SECTARIAN WAR WITH AN INTERNATIONAL DIMENSION

The PYD has found a partner in the Revolutionary Army, a new alliance of a few hundred fighters from several rebel groups. These include the Kurdish Front, a group of Kurdish deserters from Assad's forces who joined the rebel Free Syrian Army in 2011-2012. But they were quickly disappointed by the domination of Sunni Arabs and lack of consideration for Kurds. Other groups are also stragglers from the Free Syrian Army, such as al-Hazme Front, dissolved at the end of 2014 after being mauled by JAN.

Most rebels regard the Revolutionary Army as an Arab proxy of the PYD. Yet the current situation is a very local game in which one Arab clan will often ally with the PYD against another Arab clan.

In the northern part of the Azaz corridor, opposition between Kurds and Turkmens is the main basis of conflict. The strong Turkish support to Turkmen rebels -- whether in independent militias or as part of JAN and Ahrar al-Sham -- is lending an international dimension to the sectarian war.

Ankara wants to protect its allies in Azaz, hoping that it will be the base for reconquering IS territories in the eastern part of Aleppo province once the group is sufficiently weakened by Western coalition airstrikes. Otherwise, the PYD and/or the Syrian army will be the ones who benefit from the Islamic State's withdrawal.

The latter scenario is precisely what Vladimir Putin wants. Ever since Turkey shot down one of his bombers last month, he is bent on seeking revenge. Moreover, he already offered military support to the Kurds in September to help them link Afrin with Kobane by seizing Azaz and Jarabulus. The PYD then attempted to raise the stakes with their U.S. partner, but without success apparently. Earlier this month, however, Moscow delivered weapons to the 5,000 Kurdish fighters in Afrin, while Russian aircraft bombed a convoy of trucks that crossed the Turkish border into Syria at Bab al-Salam. Rebel positions north of Aleppo were struck as well, preparing the ground for an offensive by the Kurdish People's Defense Units (YPG), the PYD's main militia.

Of course, the Islamic State could seize the opportunity to overrun Azaz before the YPG. IS forces have already captured the village of Kafrah, only ten kilometers down the road from Azaz. It occupied the town a few months before the fratricidal fighting between rebel groups in winter 2014. But this does not bother the Russians or Assad, whose primary interest is to see the road between Aleppo and Turkey cut -- whether by IS or the PYD.

The Azaz corridor holds major strategic importance for Turkey, but will that be enough to spur direct intervention? If the corridor falls and Ankara fails to respond, rebel groups would interpret it as a sign of weakness, while the international community would view it as capitulation to Russia. With the Azaz border link closed, Russia could then help the Syrian army and its Shiite allies lock other Turkish crossing points between Bab al-Hawa and Jisr al-Shughour, effectively putting the entire province of Idlib in a net. This would mean a near total defeat for Ankara's Syria policy. And if the corridor's fall were accompanied by ethnic cleansing of the area's large Turkmen population (who are ethnic kinsmen of the Turks) or IS violence against civilians, Turkish public opinion would be further riled up.

Does Putin underestimate Turkey's offensive capacity? Thus far, the Turkish army has refused to send ground troops into Syria; the National Intelligence Organization (MIT) is the agency in charge of Turkish operations there. Russia's presence will remain the main deterrent to large-scale Turkish intervention, though Ankara would likely escalate indirectly to prevent the corridor's fall. Then again, Putin may well want Turkey to intervene directly against the PYD, since that could force the Kurdish group to join the Russian alliance and deprive the West of its only efficient actor on the ground against IS. To avoid this disaster, Western countries should send ground troops to occupy strategic locations such as Azaz and fight IS directly.

The Azaz corridor may or may not fall, but the bigger U.S.-Turkish goal remains securing the Marea-Jarabulus corridor from IS, and any future Azaz-Jarabulus corridor if Azaz falls to the group. In other words, if the corridor is overrun, broader US-Turkish policy in this area (backed by allies from Incirlik) would essentially become two steps forward, one step back.