Status of the Syrian Rebellion: Numbers, Ideologies, and Prospects

An in-depth look at how many fighters are still arrayed against the Assad regime, which ideology they subscribe to, and whether more moderate actors can still seize the mantle from extremist factions.

After more than five years of war, most of the armed opposition to Bashar al-Assad is increasingly fragmented, aside from the Islamic State (IS) and the Kurdish-led Syrian Democratic Forces (SDF). It is becoming more and more difficult to predict the rebellion's dynamics, as the number of groups continues to grow and the coalitions that house them change in composition and name. The opposition's most universal trait is its Sunni identity -- apart from foreign jihadists, most of the rebels are Sunni Arabs, joined by a few thousand Sunni Turkmens, so it is fair to refer to them as a "Sunni rebellion." But this religious homogeneity is not enough to give the armed opposition the military cohesion and unified political identity it so sorely needs. A closer look at the geography of this fragmentation can help observers better understand the rebellion and assess whether it still has a chance to prevail.

A March report by the Institute for the Study of the War (ISW) categorized twenty-three of Syria's hundreds of rebel groups as the main "powerbrokers" and "potential powerbrokers" in the opposition. In total, these groups command an estimated 90,000 fighters. 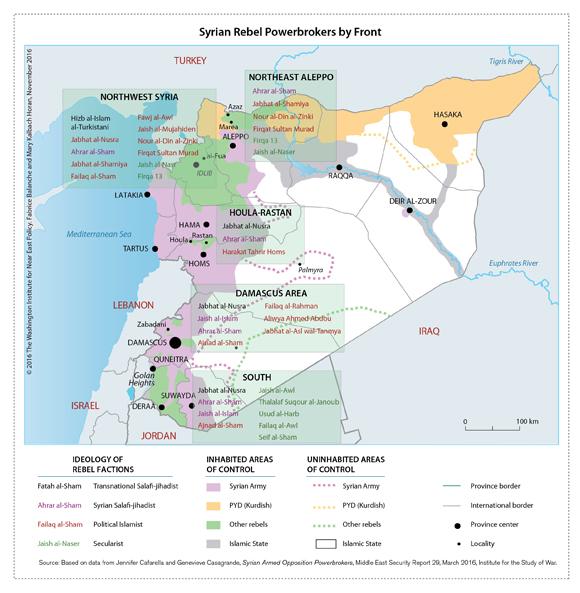 The report described a third category of groups with a few hundred fighters each. While most of the twenty-six factions in this category do not profess any ideology, several of them are linked to al-Qaeda: namely, Jund al-Aqsa, Harakat al-Fajr al-Sham al-Islamiyah, Imarat al-Qawqaz fi al-Sham, and a brigade called "Ajnad Kavkaq."

The report also outlined a fourth category composed of hundreds of smaller groups with a few dozen fighters each. These factions correspond to local clans, and their main objective is to protect their given neighborhood or village; they are incapable of launching offensives.

Estimating the total number of fighters in the third and fourth categories is difficult. The best approximation is between 10,000 and 60,000. In total, then, the "Sunni rebellion" could have anywhere from 100,000 to 150,000 fighters.

In comparison, the Syrian regime has about 125,000 regular army troops and 150,000 pro-government militia members, including around 50,000 Shiite foreign fighters (i.e., Hezbollah personnel and Iranian-trained Iraqis, Pakistanis, and Afghan Hazaras). Yet most of the native forces are preoccupied with defending territory and communication lines; only about a fourth of them are able to launch offensives.

For their part, the SDF and its main component, the Syrian Kurdish Democratic Union Party (PYD), have about 30,000 fighters. As for IS, the CIA believes it has as many as 30,000 total fighters in Syria and Iraq. Yet Patrick Cockburn of the Independent has argued that this figure is a gross underestimation because IS recruited thousands of local fighters after seizing large tracts of territory in 2014. In his view, the group's forces could number as many as 200,000, with one-quarter of them in Syria (though the capabilities and loyalties of these additional fighters, whatever their numbers, would likely not be on par with those of the IS core).

The ISW usefully classified the various rebel groups into four ideological categories: transnational Salafi-jihadists (i.e., al-Qaeda-linked fighters), national Salafi-jihadists, political Islamists, and secularists. The difference between national jihadists and political Islamists is more or less akin to the difference between Salafists and the Muslim Brotherhood -- in simplified terms, the former seek strict application of Islamic law, while many of the latter tend to favor a state with an Islamic civil constitution but protections for religious freedom. As for the "secularists," the term is used very loosely because most of the fighters in this category are conservative Muslims who do not actually want a secular government. 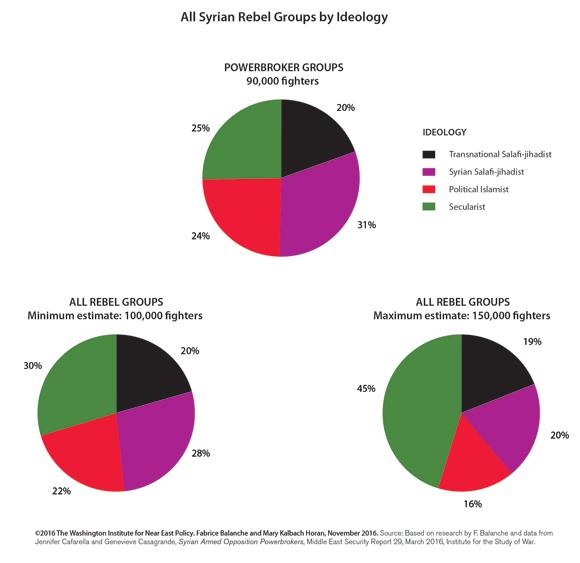 The opposition's external supporters have failed to establish a single, unified operations room from which rebel coalitions can coordinate large-scale offensives. Western governments, Saudi Arabia, and the Qatar-Turkey alliance each have their individual clients: the West mainly finances secularists, Riyadh tends to fund Syrian Salafi-jihadists, while Doha and Ankara fund political Islamists. The operations rooms established in Jordan and Turkey do bring these external partners together in support of secularist and political Islamist factions, but the assistance coming from these centers is less important than the direct aid from Gulf Arab countries, which has helped marginalize the secularists.

The division among donors has combined with internal ideological differences to cause multiple confrontations between rebel groups. Al-Qaeda affiliate Jabhat Fatah al-Sham, which until this summer called itself Jabhat al-Nusra (JN), has systematically eliminated groups that opposed its hegemony in the northwest, especially those linked to the Free Syrian Army. And in the Ghouta suburbs of Damascus, Jaish al-Islam and Failaq al-Rahman, assisted by JN, waged a bloody war against each other this spring, allowing the army to retake half of East Ghouta over a six-month period. Most recently, fighting between Jund al-Aqsa and Ahrar al-Sham, both members of the same coalition (Jaish al-Fatah, or the Army of Conquest), was largely responsible for the failure of the Hama offensive last month.

In the absence of a single command, rebel factions meet in regional coalitions; once they accomplish a given military objective, they separate and renegotiate their participation in a new operation. The coherence of these coalitions depends mainly on the sustainability of external financing and/or the ability of the dominant group to maintain unity.

The most sustainable and effective coalition so far has been Jaish al-Fatah, which JN created in the northwest in February 2015. It continues to grow thanks to its military successes and its coercive power over other groups. JN is trying to reproduce this formula on other fronts. Currently, this al-Qaeda affiliate (along with Ahrar al-Sham, another powerful faction) is present in seven of the opposition's ten regional coalitions; the three exceptions are the Southern Front, Fatah Halab, and the Euphrates Shield. 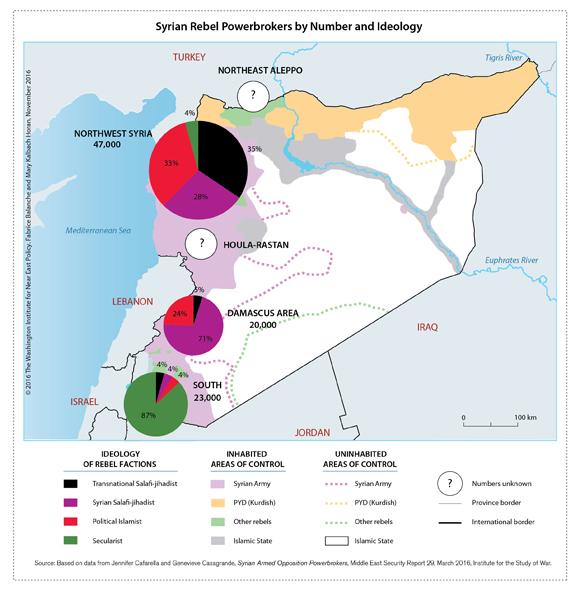 The Southern Front. Established in February 2014 by the Amman Military Operations Center, this umbrella group comprises 23,000 fighters dominated by five "secularist" groups. Yet a report issued by researcher Aron Lund a month after the coalition's creation argued that it existed only on paper, and that its five main groups were merely a weak federation of village militias. Whatever the case, the front's efforts to take Damascus in 2014 and then Deraa in June 2015 both failed. Since September 2015, its military activity has been limited to the struggle against IS.

Damascus area. Around 20,000 rebel fighters are in the Damascus area. Half of them (hailing from Jaish al-Islam, Failaq al-Sham, and JN) are currently encircled by regime forces in East Ghouta. One by one they have lost towns in the western suburbs (e.g., Daraya, Moadamiya, Qudsaya). In the Anti-Lebanon Mountains, Assad's forces hold Zabadani and Madaya to ensure the security of the Shiite towns of al-Fua and Kefraya in Idlib province.

These encircled rebels had hoped to take Damascus, but all of their offensives since summer 2012 failed. They have now lost hope of reaching this goal or even being rescued from the south. Some factions in Daraya and Qudsaya have therefore made deals to be exfiltrated to the rebel-controlled province of Idlib -- an arrangement the regime was willing to countenance because it can easily retake this valuable area near the capital once local rebels are gone.

The northwest. The main focus of the rebellion is now in the northwest, where nearly 47,000 fighters are active. Jihadist and Islamist factions represent three-fourths of these personnel. JN and its allies have essentially built an Islamic emirate in the Idlib area by gradually eliminating or integrating secularist groups.

Since last year's Russian intervention, however, even rebels on this front have been forced to withdraw. Although their territorial losses have not been large, they have been strategic -- key regime areas in Latakia, Hama, and Aleppo are no longer threatened.

In Eastern Aleppo, JN and its allies now dominate the rebellion, and the Fatah Halab coalition seems marginalized. Led by JN forces, Jaish al-Fatah has been attacking toward the Hama and Latakia fronts to divert the army from Aleppo so that rebels might finally take that city. More broadly, by maintaining its radical line and refusing to negotiate with the Assad regime or other players, JN has sought to attract other rebels disappointed by the lack of support from outside allies.

Northeast Aleppo. The 5,000 rebel fighters in the Azaz-Marea pocket have been reinforced by thousands of pro-Turkish fighters from Idlib province, including the Turkmen brigade Firqat Sultan Murad. The main objective of their offensive is to create a safe zone between Azaz and Jarabulus and thus prevent the PYD from unifying the Kurdish cantons along the northern border.

The Houla-Rastan pocket. A few thousand rebels are essentially surrounded in this enclave between Homs and Hama. The leading group appears to be Harakat Tahrir Homs, a faction headquartered in Rastan and classified by ISW as political Islamist. It competes with both Jaish al-Sham in Talbisah and a local coalition in Houla for dominance.

Yet the situation is calmer in this region than in East Ghouta. The rebels have launched offensives to the north in order to assist with the battle for Hama and link up with the rebel province of Idlib. This is their only chance of avoiding the fate of their brethren in Ghouta, though the army may yet take direct action against this enclave.

Although the non-jihadist rebels technically outnumber the jihadists, they are very fragmented and marginalized on most fronts, which gives the jihadists the ascendancy. Only the West, particularly the United States, can help "secularist" rebels become major actors again. That would require the incoming administration to act quickly, and even then, the policy would not work if Saudi Arabia, Qatar, and Turkey continue supporting Islamist factions. Yet this may be the only means of preventing rebel zones from becoming ''jihadistans," as has already happened in Idlib province.