The Scoop on the Arab Street: New Polls, Taboo Topics

by David Pollock, Michele Dunne, Ali Shihabi
Also available in
About the Authors

David Pollock
David Pollock is the Bernstein Fellow at The Washington Institute, focusing on regional political dynamics and related issues.

On October 25, David Pollock, Michele Dunne, and Ali Shihabi addressed a Policy Forum at The Washington Institute. Pollock, the Institute's Kaufman Fellow, previously served as the chief U.S. government pollster for the Middle East. Dunne directs the Middle East Program at the Carnegie Endowment for International Peace. Shihabi is executive director of the Arabia Foundation in Washington. The following is a rapporteur's summary of their remarks.

New polls related to sensitive political and regional issues in eight Arab countries -- Saudi Arabia, Qatar, Egypt, the United Arab Emirates, Jordan, Lebanon, Bahrain, and Kuwait -- reflect real political attitudes that have important effects on policy and political stability in these states. This is because governments care about these issues, at least to some extent, even if they are not democracies.

Findings from the polling show, to begin with, minimal support for violent jihadist groups. In particular, actors such as the Islamic State and al-Qaeda have only single-digit support, as has been the case for the past decade. This is largely because Arab populations themselves fear being victimized by terrorists, as has occurred frequently in recent years. Nor do populations back terrorism as a tactic. 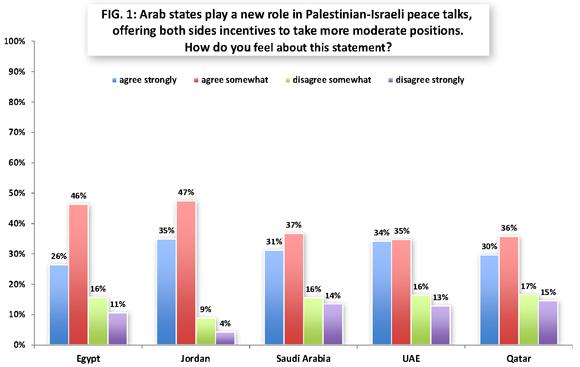 Also experiencing a drop in support, as compared to polling three years ago, are Hezbollah and, to a lesser extent, Hamas, based in Lebanon and Gaza, respectively. The same applies for Iran. Nevertheless, Shia Muslim citizens of Lebanon still express very positive attitudes toward both Hezbollah and Iran. 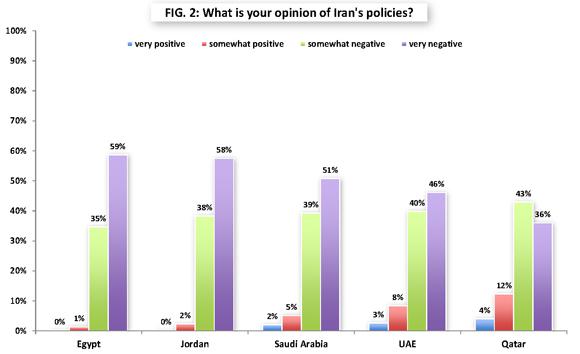 Generally speaking, although those surveyed express an interest in and opinions on foreign policy issues, they believe their governments should prioritize enacting internal political and economic reforms. On foreign policy, majorities in the Gulf states cite countering terrorism, confronting Iran, and resolving the crisis in Yemen -- while among Israel's neighbors in Egypt, Jordan, and Lebanon, countering terrorism and solving the Palestinian-Israeli conflict tie as top popular priorities in foreign policy.

Support for U.S. policies in the region has risen, albeit from a very low baseline, to an average of around 20 percent. But at least twice as many agree that having good relations with the United States is important. Also rising modestly is support for more moderate, tolerant interpretations of Islam. Most surprising among the upticks is some backing, to as much as one-third of the public, for quiet cooperation with Israel, such as in the technology and counterterrorism fields and in containing Iran. Also related to Israel-Palestine, the majority in every country supports the idea of Arab states encouraging the two sides to take moderate positions in prospective peace talks. 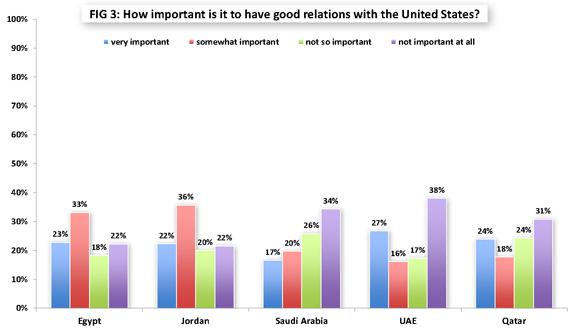 In the context of substantially negative overall Arab views of Iranian policies, respondents from Qatar, which is sometimes depicted in Arab media as "pro-Iran," share such a highly negative perception. Yet, as compared to Arab peers, Qataris are more apt to view good relations with Iran as important. In the current acute intra-Arab dispute with Qatar, however, majorities of Arab respondents from all countries say they do not support the boycott against Qatar.

On a related issue, the Muslim Brotherhood earns support from about one-third of Bahraini and Kuwaiti Sunnis, but no support at all from the large Shia populations in those two Gulf states. Remarkably, the Brotherhood continues to attract some sympathy from around a third of the public in Egypt, Saudi Arabia, and the UAE -- even though all three governments have outlawed the Brotherhood as "terrorists." 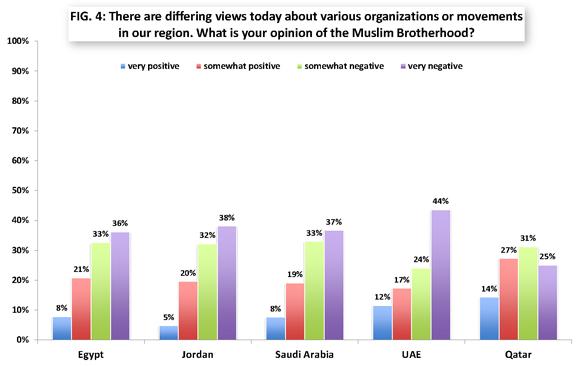 On these highly controversial issues, these polls demonstrate that a very substantial minority of citizens are willing to disagree with their government's positions. This suggests that the polls are indeed credible -- and that official policies will either adjust to these sentiments eventually or face continuing problems. 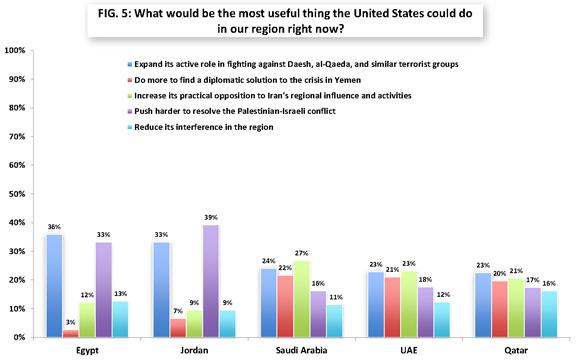 These surveys provide valuable political insights unavailable elsewhere. One noteworthy overarching finding is common ground between Egypt and Jordan on a number of important issues. On foreign policy in particular, respondents appeared to subscribe more strongly to certain stances adopted by their governments, including broad concerns over Iranian involvement in the region, as opposed to others. The Iranian clients Hezbollah and the Houthis, in Yemen, draw particular concern. This, of course, takes into the account the divide in Sunni-Shia opinion.

By contrast, the extent to which responses were all over the map on other contentious issues, such as Qatar, appears to demonstrate legitimate confusion by respondents. Indeed, anecdotal reports from the region indicate the view that the Qatar conflict reflects a dispute between governments, not between peoples. And, ultimately, the rift between Qatar and it neighbors will be settled whenever the two sides decide they need each other more than they need to fight with each other -- when both sides realize they cannot afford this division in the region.

Also surprising was extremely low support for Russian policies in the region -- even lower than the meager support for U.S. policy. In Jordan, which is located next to Syria, such high anti-Russia sentiment might be understandable, but the cause is less clear in someplace like Egypt. Likewise, respondents view strong relations with the United States as far more important than strong relations with Russia (in Egypt, 56% v. 32%). Such findings are especially striking considering the emphasis placed by Egyptian president Abdul Fattah al-Sisi on developing a good relationship with Russian president Vladimir Putin.

An important takeaway involves remarkably consistent Egyptian views on the Muslim Brotherhood in recent years. This shows that despite government-sponsored media campaigns against the Brotherhood, and a general crackdown on the group, popular opinion is not easily swayed. Separately, results from other pollsters show that a significant number of Egyptians believe in the notion of having religious officials holding public office.

Other surveys suggest that Palestinians, among the most heavily polled people in the region, could be mulling the possibility of a one-state struggle. Thus, perhaps, the refusal of so many East Jerusalem Palestinians to say whether they'd prefer to be citizens of Israel or a future Palestinian state, along with a similar refusal by West Bank Palestinians to indicate whether Jews have some rights to the land.

The lack of free speech in the Middle East creates an extremely difficult environment for polling. As a result, people are always suspicious and worried that what they say might be recorded somewhere. This is why one must be wary of drawing any conclusions from minor polling trends observed in the region. Only larger trends offer grounds for drawing conclusions.

Political expression, in turn, is very narrow among Arab citizens. For example, in Saudi Arabia people could be jailed for publicly disagreeing with the boycott against Qatar. Similarly, their public remarks must toe the government line, whether on fighting the Houthis in Yemen or on the overall Saudi policy toward Iran.

With regard to the dim regional perception of the United States, the war in Iraq still plays a role, as does the U.S. connection with Israel. The Iraq legacy in particular inclines citizens against future U.S. intervention in the region. On Israel, moreover, the Washington policy community must take with a grain of salt slightly greater willingness expressed among Gulf communities to cooperate with Israel.

In the Gulf, the split in polling among Qatari nationals on the government position in the regional dispute reflects the discomfort produced by the situation. Historically, the Gulf nations dealt with their conflicts confidentially. This very public spat, by contrast, has changed the calculus.

From the perspective of the other Gulf nations, Qatari adventurism is harming not only broader Gulf security but the security of Qatar itself. Indeed, Saudi Arabia -- along with the UAE, Bahrain, and Egypt -- recognizes that the Qatari people hold Iran, Hezbollah, the Houthis, and even the Muslim Brotherhood in low regard. Thus, underlying the campaign against Qatar is the notion that the kingdom's adventurism is very much a project of the elite. Ultimately, these regional powers know that Qatar lacks the economic, political, and geographic assets of its neighbors -- and they will hold out until Qatar feels compelled to meet their demands

This summary was prepared by Rania Said Abdalla.

Brief Analysis
How Religion and Money Shape Russian Soft Power in Syria
May 26, 2022
◆

Brief Analysis
Rebuilding Israeli-Turkish Relations: A Marriage of Convenience
May 26, 2022
◆