As the Kurds continue to pursue their goal of a contiguous territory in northern Syria, various nonmilitary factors will determine whether their nascent statelet is viable in the long term, including a host of demographic, economic, water, and oil issues.

Although it is still difficult to predict the future of Syria as a whole, the existence of an increasingly autonomous Kurdish region along the country's northern frontier has become a reality. For now, the boundaries of this "Rojava" remain blurred and might be different from those officially claimed by the Syrian Kurdish Democratic Union Party (PYD). Yet the group's ongoing efforts to expand and merge its cantons reflect a firm commitment to gathering Syria's Kurds into an economically viable statelet that extends tantalizingly close to the Mediterranean Sea -- a prospect that could also advance the goals of its parent organization in Turkey, the Kurdistan Workers Party (PKK). 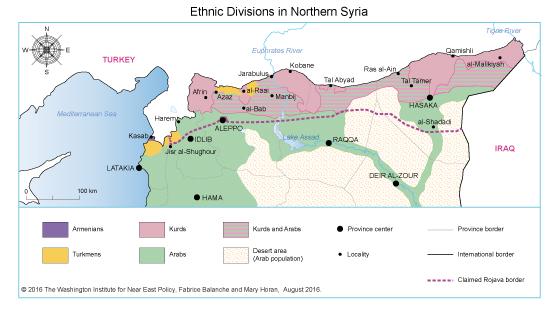 Since its January 2015 victory in Kobane, the PYD has continued to expand its territory. Most of this expansion has come at the expense of the Islamic State (IS), but the Kurds have also seized areas from other rebels in the Azaz corridor (see "Kurdish Forces Bolster Assad in Aleppo") and from the Syrian army in Hasaka. Even if these areas are only a few square miles in size, they are nonetheless strategically important; for example, Hasaka is a provincial capital, so any neighborhoods gained there are significant.

From the homogeneously Kurdish areas of Afrin, Kobane, and Qamishli, the PYD has set out to conquer mixed Arab-Kurdish territories and even some non-Kurdish areas. The group's ultimate aim is to establish territorial contiguity between its Kurdish strongholds, a goal that it furthered by taking Tal Abyad in spring 2015 and Manbij earlier this month (technically, the Manbij offensive was conducted by the mixed Arab-Kurdish Syrian Democratic Forces, or SDF, but the Kurds dominate that coalition). The rationale for the February conquest of al-Shadadi in southern Hasaka province -- a non-Kurdish territory -- was to control nearby oil wells and cut the Islamic State's road between Mosul and Raqqa. 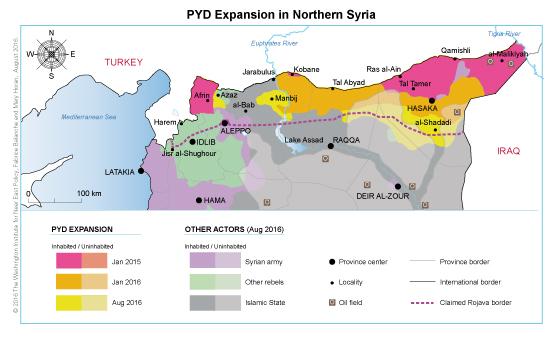 Today, the PYD controls a territory in which about 2 million people live but only 60 percent are Kurdish (see PolicyWatch 2528, "Ethnic Cleansing Threatens Syria's Unity"). In the eastern Jazira canton (aka Cizire) and the central Kobane canton, Kurds constitute a slight majority of the population (55 percent). In the western Afrin district (an official Syrian administrative division), the population is nearly 100 percent Kurdish, but the PYD's maps of Rojava indicate that the "Afrin canton" will eventually incorporate Azaz, Jarabulus, northern al-Bab, and northern Manbij districts -- an outcome that would dilute the Kurdish population share to around 30 percent. Presumably, the PYD will not try to conquer the Arab and Turkmen territories of Azaz and Jarabulus in the next few months, since they are a low strategic priority at the moment and too sensitive for Turkey; just yesterday, Ankara launched new military operations in the Jarabulus area.

For demographic and strategic reasons, the Kurds also have no desire to attack Raqqa, the capital of the so-called IS "caliphate," at least not until they are able to link Afrin and Kobane. If IS begins to pose a serious threat to Rojava from Raqqa, the Kurds might launch an offensive there, as they did against al-Shadadi when local IS forces threatened Hasaka. But al-Shadadi is fifteen times less populated than Raqqa, so the calculus would likely be different. 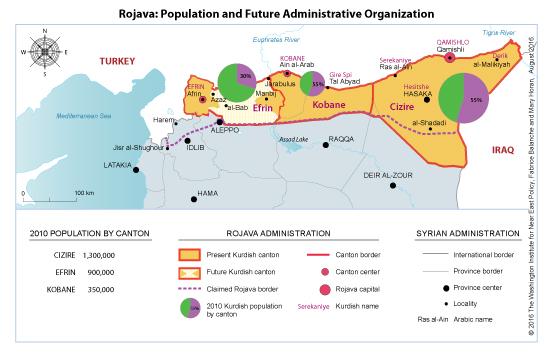 The more the PYD expands its territory, the more it will have to integrate non-Kurdish populations. This is particularly true in the Manbij area between the Euphrates River and Afrin, where Kurds represent less than a quarter of the population. But the PYD seems set on the goal of connecting the cantons, and the group's leaders believe that various "Kurdization" efforts could help bring a large part of the population under their banner. Village names and maps published under the French Mandate indicate that a significant proportion of locals who are officially classified as Arabs actually have Kurdish origins. In the face of PYD domination, these Arabic-speaking Kurds could conveniently choose to reconnect with their Kurdish roots. Moreover, the demography of the area may be substantially modified if the Arab refugees who once lived there do not return; Kurdish refugees are much more likely to return given the PYD's ascension. This is particularly true in Tal Abyad district, where Arabs who supported IS are persona non grata.

Unfortunately, the Kurds might also choose to overcome their demographic weakness in some parts of Rojava by engaging in ethnic cleansing or allying with Arab tribes that want to side with the strongest player in order to exact revenge. For example, many tribes want nothing more than to eliminate rivals that have sided with IS; this is the strategy of the Shammar clan led by the Sheikh Hamidi Daham al-Hadi in southeast Hasaka. The PYD also hopes to attract some of the one million Kurds currently living in Damascus and Aleppo. For that to happen, however, it would need to greatly improve the bad economic situation in Rojava.

Prior to the war, the Assad regime deliberately left Kurdish areas underdeveloped, mainly as a way of spurring the Kurds to migrate to big cities where they could be Arabized more easily. Similarly, the Jazira region was treated as a kind of "internal colony" devoted solely to grain and cotton production. Today, agriculture there remains very traditional and has suffered dramatically from water scarcity since the turn of the century. Overconsumption of water on the Turkish side of the border has reduced supplies in northern Syria, and Assad regime made no serious attempt to solve the problem. Unlike in the Euphrates Valley, where farmers receive cheap and abundant water due to state irrigation projects, farms in Jazira are supplied by private wells. In the years leading up to the war, drought and the tripling price of fuel for motorized pumps caused a significant reduction in Hasaka's cultivated areas (see PolicyWatch 2622, "Water Issues Are Crucial to Stability in Syria's Euphrates Valley").

An extensive Tigris River irrigation project was planned for 2008, but the lack of political will in Damascus and the eventual uprising prevented its implementation. After the war, water scarcity may be the main problem facing Rojava because agriculture is the local population's main source of income. Even if administrators prioritize the Tigris pump station, they will need to broker an agreement with Iraq and Turkey to tap into the river. Bashar al-Assad reached such an agreement with Ankara in 2008, but now all the parameters have changed.

In addition, Kurdish control of Tishrin Dam on the Euphrates could present opportunities to develop irrigation in western Rojava, which also suffers from shortages. Yet any such efforts would likely create problems with Arab farmers living downstream.

ROJAVA OIL IS NOT YET EXPORTABLE

The presence of oil wells in Jazira is an asset for Rojava; before the war, the oil fields at al-Malikiyah and al-Shadadi produced around one-third of the country's 380,000 barrels/day of crude. Since then, that figure has collapsed due to lack of maintenance and closed pipelines. Nevertheless, oil has become a major source of revenue for the Rojava administration, and it gives them the potential for future energy autonomy. Down the road, Rojava could export most of its production if it finds an adequate transportation solution.

Direct export across Turkey seems impossible for political reasons. If the original pipeline to the Syrian coastal terminal of Banias were reopened, Rojava could eventually sell oil to the Syrian government, but Damascus would surely oppose paying full price for "its own oil." Alternatively, the Syrian Kurds could use the Iraqi Kurdish pipeline to Turkey, though that would require reaching an agreement with the Kurdistan Regional Government (KRG). The party currently in power there, the Kurdistan Democratic Party (KDP), has very bad relations with the PYD due to decades-long tensions with the PKK; the Iraqi and Turkish groups follow entirely different ideologies and are led by strong leaders who detest each other. Partly as a result, trade between the Syrian Kurds and the KRG has been erratic. These obstacles could cause long-term problems for Rojava because the KRG is its only land connection with the outside world besides the Turkish border (which is closed) and the Euphrates Valley (which IS controls).

A PKK CORRIDOR TO THE MEDITERRANEAN?

The oil situation highlights the main barrier to Rojava's sustainability: its isolation. Kurdish society is very resilient and can accept Spartan living conditions, but many people have been leaving the PYD's areas of control. To stop the population hemorrhage, the PYD will need to develop the economy, which requires the free movement of goods to and from other countries. Yet relations with Turkey and the KDP may not improve anytime soon, and the timeline for eradicating IS and stabilizing the Euphrates is uncertain. 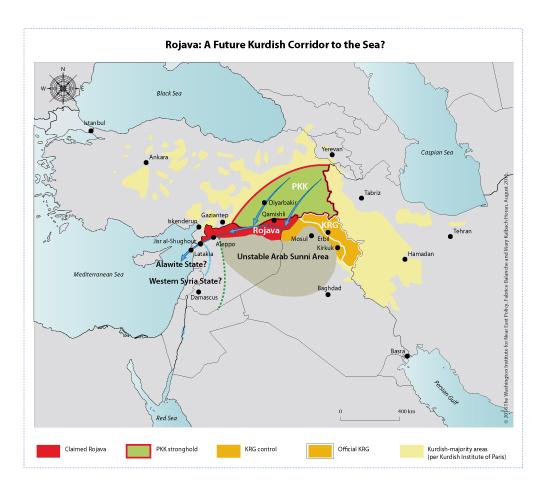 Therefore, the only alternative may be to establish a western connection with Aleppo and the regime-controlled zone, which would require the PYD to accelerate its timeline for creating a territorial link between Afrin and Kobane. In this regard, it is important to remember that the PYD is the PKK's offspring and shares its regional goals. Extending Rojava all the way to the Mediterranean could facilitate both independence for Turkish Kurdistan and greater integration with the KRG, assuming Washington can eventually pressure the KRG into opening its border with Rojava. To be sure, the PYD has not mentioned any ambition to reach the Mediterranean, and bridging the seventy-kilometer gap between Rojava's claimed western border and the coast would entail great obstacles. Not only is the area populated entirely by non-Kurds, but Turkey and whoever controls the Alawite heartland would object strenuously. Yet at least some Kurds no doubt dream of establishing a Kurdish port, however distant the prospect.

Finally, the war could usher in other territorial outcomes that further the PYD/PKK regional project, such as an Alawite state on the coast and/or a Sunni Arab state further east. Official maps of Rojava already envision a western boundary that runs all the way to the edge of the Alawite heartland, so establishing friendly economic relations and coastal access privileges with such entities in the long term is not out of the question.

Brief Analysis
Iran’s Military Establishment Doubles Down on “Revolution”
May 5, 2021
◆