The Race for Deir al-Zour Province

The SDF and U.S.-supported Arab fighters likely lack the might and unity to overcome Assad-regime advances and other obstacles.

After the eventual fall of Raqqa -- the capital of the Islamic State -- all eyes will scan southeast toward Deir al-Zour province, where a competition looms between U.S.-backed rebels and Syrian-regime forces, with the Kurds likely remaining on the sidelines at the outset. 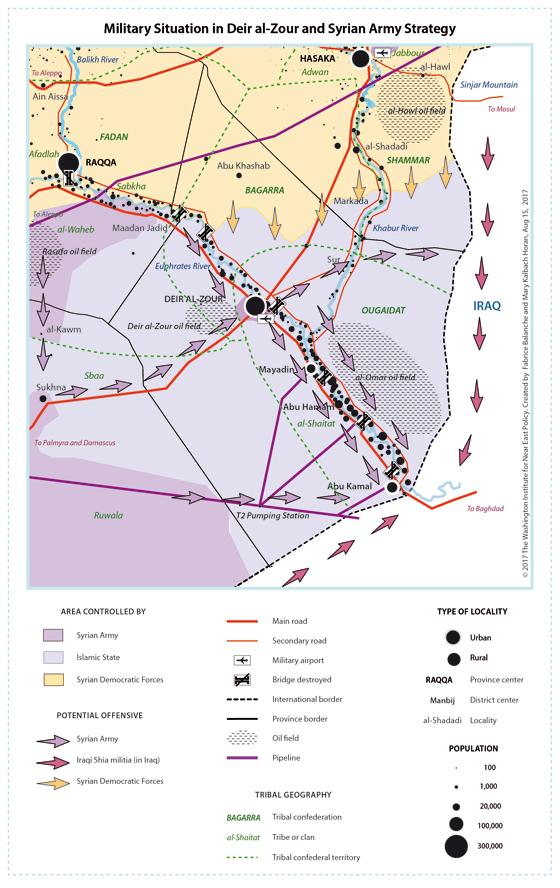 In recent months, the Syrian army has advanced in the Tadmur (Palmyra) desert and southern Raqqa province, and in the coming weeks it will turn its attention to lifting the Islamic State (IS) siege of Deir al-Zour, continuing a years-long quest to reconquer the city as a means of taking back the entire province. In particular, if the Syrian army succeeds in capturing Deir al-Zour city, it will then focus on the rich al-Omar oil fields, which account for 50 percent of Syrian production, located to the north of the Euphrates between Mayadin and Abu Kamal. At both the local and national levels, these fields will be crucial in helping Syrian president Bashar al-Assad secure allegiance from area tribes. Logically, the regime forces would then advance to the Iraqi border and join with Shia militias somewhere in the southern Sinjar Mountains. The largely Kurdish Syrian Democratic Forces (SDF) and U.S.-backed Arab rebels would thus be denied access to the lower Euphrates Valley, between Deir al-Zour and Abu Kamal, as previously occurred at al-Tanf in June 2017, when the Syrian army and Shia militias reached the Iraqi border from Tadmur.

A limited SDF offensive, however, is possible in northern Deir al-Zour province. Yet the Syrian regime and its allies will work assiduously to prevent the SDF from reaching the al-Omar oil fields, because such a development would cut off the route between Deir al-Zour city and the Iraqi border, complicating Iranian plans to create their land corridor to the Mediterranean. 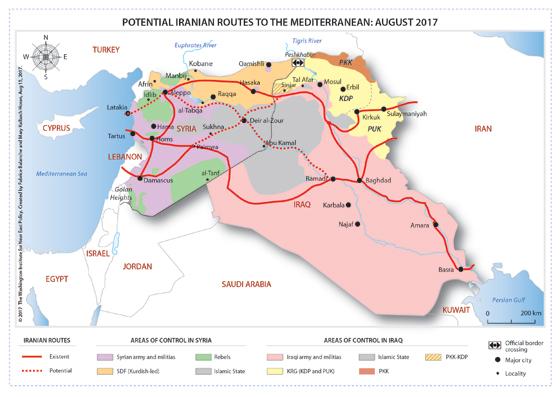 This scenario runs counter to the rumors circulating in Washington about a future U.S.-backed rebel offensive in Deir al-Zour province. According to such rumors, the Arab rebels and SDF will advance on the northern shores of the Euphrates, up to Mayadin, then cross the river and travel until Abu Kamal before seizing the Iraqi border area. Thus, the Syrian army will be limited to taking Deir al-Zour city and its nearby surroundings. Such a development would allow the United States to block the planned Iranian corridor and maintain pressure on the Assad regime. On the other side of the border, the Iraqi army, not the Shia militias, would eliminate the IS presence. The Sunni Arab tribes on both sides of the border would thus be under a U.S. protectorate and the Iranian corridor project rendered moot. Even excepting geopolitical considerations not discussed here, this rosy situation is unlikely to play out, as evidenced by various clues on the ground. 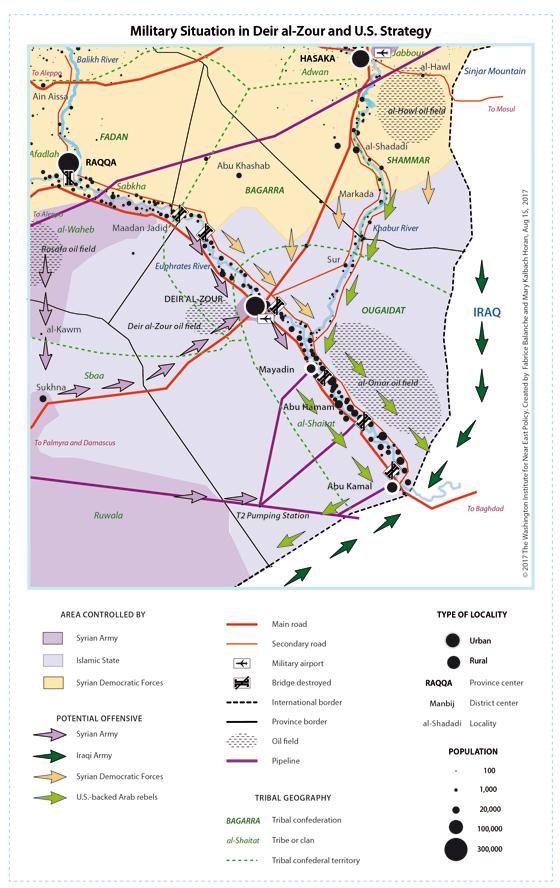 First, the U.S.-backed Arab rebels -- namely, the Lions of the East (Usud al-Sharqiya), Rebel Commando Army (Jaish Maghaweer al-Thawra), and the new Deir al-Zour Liberation Brigade (Liwa Tahrir Deir al-Zour) -- number just two thousand, according to the best estimates. Such a combined force clearly cannot defeat thousands of the most seasoned IS fighters, especially considering their potential lack of motivation to fight the jihadists. Second, more than a year ago, on June 29, 2016, a rebel attempt by air to take Abu Kamal failed miserably when local tribes, fearing IS, did not carry out their revolt. Third, in spring 2017, when the rebels were attempting to advance on the ground toward Abu Kamal from al-Tanf, they were stopped by a flash offensive by Shia militias moving from Tadmur to the border. U.S. commanders have indicated a desire to transfer the Arab rebels to al-Shadadi, where they can be integrated into the SDF, thus enabling an offensive in Deir al-Zour province from the north. Yet some soldiers will likely defect to the Syrian army instead of traveling to al-Shadadi. Fourth -- and not unimportant -- the SDF command does not want to support these Arab fighters.

The true SDF command, the Democratic Union Party (PYD) -- a Syrian offshoot of the Turkey-based Kurdistan Workers Party (PKK) -- refuses to support an offensive headed by the Deir al-Zour Liberation Battalion. Instead, SDF leaders have agreed to back the Sanadid Forces (Quwat al-Sanadid), a militia led by Shammar tribesman Sheikh Hamidi Daham al-Hadi, a close ally of the Kurds. Without PYD collaboration, a U.S.-backed Arab force will struggle to challenge the Islamic State in this area. Past such strategies have always ended in bitter failure, leading the United States to abandon rebel-training programs in order to concentrate its resources on the SDF.

The SDF hesitation to bless an independent pro-U.S. force in northeastern Syria can be explained by fears of a future competitor once the Islamic State is defeated. Furthermore, the PYD wants to remain the only U.S. partner in northeastern Syria, subordinating the Arab tribes in the process. Such reasoning partly explains the deployment since fall 2016 of Kurdish troops to attack Raqqa, an Arab city that could never be integrated into Rojava, the Kurds' enclave in Syria. The PYD likewise knows that the United States guards Rojava against Turkish attack but that once Raqqa is liberated, the Syrian Kurdish group will seemingly become a dispensable ally for Washington. This begs the question of what happens then. Amid such uncertainty, the PYD has an interest in prolonging the Raqqa battle. According to Haval Gabar, who heads a YPG unit in Raqqa, the fight could last another four months. Yet no room exists for another major offensive in the meantime, allowing the Syrian army to move quietly toward Deir al-Zour.

Amid this scene, the allegiance of area tribes is fluid, and they will seek to acquire material advantages when agreeing to any alliance. Past Assad-regime means of such control included access to water, land distribution, smuggling, and administration and army jobs. In the future, oil resources will probably be shared and some tribes will demand payment to protect the pipelines. In particular, following Russia's military intervention in September 2015, certain tribal leaders felt the wind shift and returned to the regime fold. Nawaf al-Bashir, who leads the Baggara tribal federation, made just such a move after five years of Istanbul exile.

Alongside material advantages, revenge can also push tribes toward the Syrian regime, as with the al-Shaitat. In 2014, this powerful tribe opposed another -- from the Ougaidat federation, which allied with IS -- for control of oil wells near Mayadin. Seeking to exploit this dispute, the Islamic State, in 2014, massacred at least seven hundred members of the al-Shaitat, thereby seeking to subdue the tribe and discourage tribal revolt generally. No tribe has since risen up against IS, despite its recent defeats, because the terrorist organization still has the resources to commit massacres. The al-Shaitat, meanwhile, formed a militia, the Euphrates Hawks (Liwa Suqur al-Furat), which fights with the Syrian army in Deir al-Zour city, around Tadmur, and south of Raqqa, thus seeking to reconquer lost territory and punish tribes that collaborated with IS in the 2014 massacre.

The PYD today senses that the Russian presence in Syria is more durable than that of the United States. The Kurdish group believes, further, that when faced with a choice between Rojava and Turkey -- a NATO ally -- the West will choose the latter. This explains why the Syrian Kurds likely see a partnership with Russia as the best way to preserve their territorial gains over the long term. The PYD's loyalty to its Western tactical allies is thus highly questionable today. A scenario thus exists in which the PYD could enter a secret agreement, if necessary, with the Syrian regime and Russia or Iran. The SDF, given such a turn, would refuse to help the Arab rebels conquer Deir al-Zour province -- in exchange for purported recognition of SDF authority over northern Syria -- because the risks of retaliation would be too high. In August 2016, for example, Russia allowed Turkey to sever Kurdish contiguity by seizing the towns of Jarabulus and al-Bab. Today, Rojava faces the threat of a new Turkish military intervention in Tal Abyad, which would disrupt contiguity between Kobane and Qamishli.

When the United States ended its support for Syrian rebels earlier this summer, it demonstrated bad faith to its purported allies. The PYD and Arab proxies will now be reluctant to wholeheartedly support the U.S. strategy in eastern Syria without serious long-term guarantees, such as the unlikely construction of a permanent U.S. military base and tens of thousands soldiers on the ground.