Preventing a Jihadist Factory in Idlib

The international coalition must take the same comprehensive approach to HTS as it is taking to the Islamic State.

In July 2017, Hayat Tahrir al-Sham (HTS) seized the entire Syrian-Turkish border in Idlib province and the Syrian provincial capital of Idlib, to the detriment of its former ally Ahrar al-Sham (AS). The move came several months after the rebels fell in December 2016 to regime and allied forces in Aleppo, whereupon HTS committed itself to dominating the entire Syrian rebellion. In so doing, it sought to force its former allies to submit to its jihadist strategy, while basing itself in the Idlib area.

On January 28, 2017, HTS was formed through the merger of several rebel factions associated with Jabhat Fatah al-Sham (formerly Jabhat al-Nusra). These factions included Harakat Nour al-Din al-Zinki, Jabhat Ansar al-Din, Liwa al-Haqq, and Jaish al-Sunna. In seeking to strengthen its grip on the rebellion, HTS failed, however, to integrate its main former ally, Ahrar al-Sham. As a result, many AS brigades defected to HTS, while others, such as Free Syrian Army remnants, Suqur al-Sham, and al-Jabha al-Shamiya (Levant Front), joined AS in order to gain protection from HTS. Despite absorbing its own new elements, AS did not bolster itself militarily, and the group's cohesion has suffered -- making it unlikely AS will be able prevent further defections to HTS. 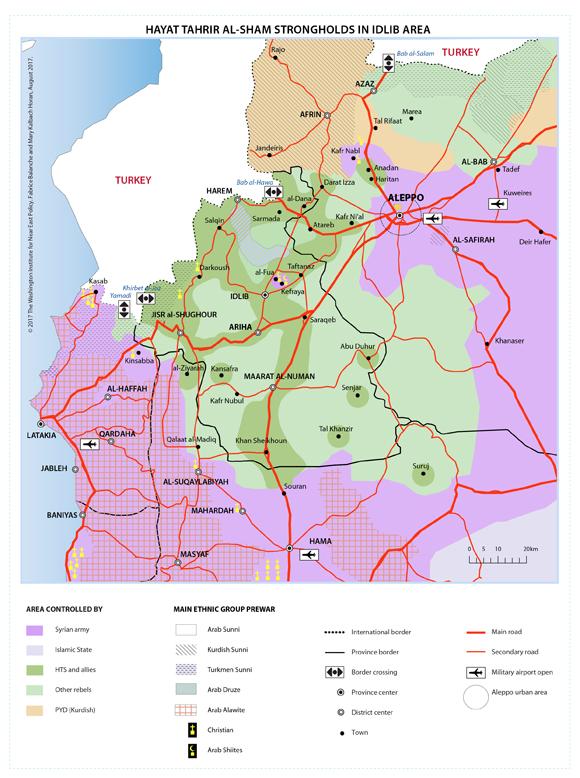 Since 2014, the various Syrian incarnations of al-Qaeda have methodically eliminated the Free Syrian Army (FSA) brigades in northwestern Syria by either killing or appropriating their members. The FSA has been reduced to a few thousand combatants today in the Idlib area, a winnowing to which AS contributed -- and noteworthy in light of the later AS-HTS split. In winter 2017, the Syrian affiliate of al-Qaeda even attacked Jund al-Aqsa, an extremist faction alongside which HTS, and Jabhat al-Nusra before it, fought. The small jihadist group was thus forced to dissolve, with some of its members joining the Islamic State and others the Turkestan Islamist Party (TIP; previously known as the East Turkestan Islamic Movement), a strong HTS ally. The TIP includes several thousand Uyghur fighters originally from Xinjiang, China (aka East Turkestan), who are fighting in Syria and living with their families between Jisr al-Shughour and Ariha.

Today, HTS constitutes the largest rebel group in both Syria and Idlib province. Of the 30,000 or so HTS combatants across the country, some two-thirds are situated in the Idlib area. Following military victories, HTS often attracts additional recruits. In particular, in July 2017, new AS brigades to join included Usud al-Islam (Lions of Islam), located in southeastern Idlib province; Usud al-Maarat (Lions of Maarat), based in Maarat al-Numan; and a group under the emir of al-Dana, a small town in northern Idlib. Further reinforcing HTS in Idlib have been fighters booted from previously rebel-held enclaves now controlled by the Syrian army, such as Zabadani, the al-Waar district of Homs, al-Qabun, Daraya, and others. Additionally, some 1,500 HTS fighters and their families might soon arrive from the Arsal area of Lebanon, where Hezbollah and Lebanese forces are conducting a campaign against Sunni jihadists. Only one notable HTS defection can be counted thus far: that of Harakat Nour al-Din al-Zinki, which broke off to become an independent force in late July 2017. 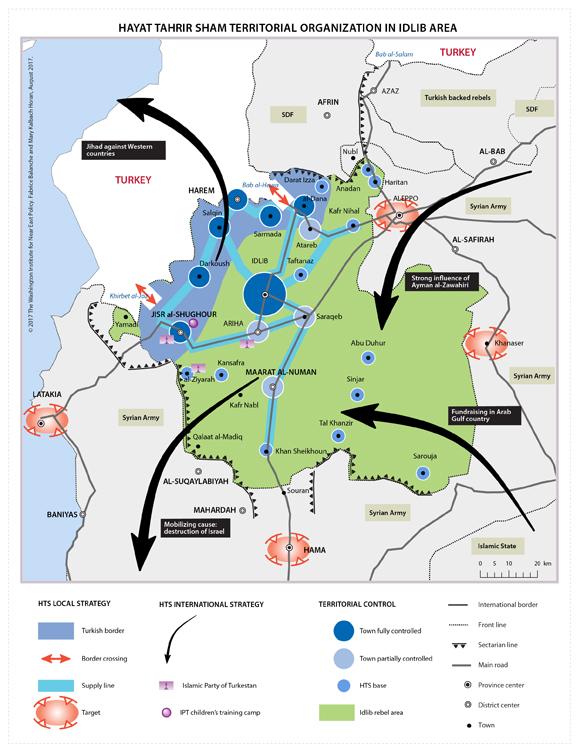 In assessing the strength of HTS, the group's fluid territorial presence can be deceptive. Indeed, HTS relies more on the potency of its network than on the accumulation of territory. This past July, the group chased rival groups from Idlib city as well as from smaller towns such as Maarat al-Numan, Saraqeb, and Atareb, all of which are former FSA strongholds. When occupying such communities, HTS notably practices discretion in order to avoid antagonizing locals.

In the southern and eastern sections of the province, HTS is satisfied with its past conquests of Syrian army military bases such as that in Abu Duhur. Finally, it retains strongholds near Aleppo (in the northwestern suburbs), Hama (Khan Sheikhoun), and Latakia (Jisr al-Shughour), from which it can probe opportunities for expansion against the Syrian regime. Other areas not populated by Sunni Arabs are more difficult to control. In broader terms, HTS does not seek territorial continuity but instead control of strategic points from which it can launch raids, including against villages such as Kafr Nabl, an anti-Islamist stronghold. Having elicited allegiance from local factions throughout the Idlib area, HTS can mobilize thousands of additional combatants, as in the Hama offensive against the Syrian army in spring 2017.

The main HTS stronghold, encompassing the border area with Turkey from Jisr al-Shughour to Bab al-Hawa, allows for unparalleled control of both cities and the countryside. A lone weak point can be found in the Turkmen-inhabited country north of Latakia, a small Turkish protectorate that uses the Yamadi crossing border. Overall control of the Syrian-Turkish border is fundamental to HTS assertion of power over the province and its ability to dominate other factions. Such control provides the jihadist group with a monopoly over the transit of humanitarian aid and any form of trade with Turkey. Indeed, whereas various groups engage in trade with government-held areas, humanitarian aid comes almost exclusively from Turkey, and feeding the area's two million inhabitants, nearly half of whom are internally displaced, is essential. Moreover, should other factions lose access to weapons from Turkey and the Turkish-controlled border area between Azaz and Jarabulus, they may turn to the Syrian government to avoid destruction if the status quo persists.

On August 22, HTS announced its consolidation of control over all local committees -- consisting of civilians who distribute public services and humanitarian aid from abroad -- of the "liberated zone." Curiously, this statement followed one by Turkey demanding the creation of an Idlib civilian body to manage humanitarian aid and border crossings, and threatening otherwise to halt humanitarian aid. HTS knows, however, that Turkey will not risk inviting hundreds of thousands of hungry Syrians to its border, an unmanageable influx. The first such arrivals would be internally displaced persons (IDPs), who would crowd the camps in dramatic fashion, seeking protection from Syrian regime bombardments.

For Hayat Tahrir al-Sham, IDP camps constitute ideal recruitment sites where the group can exploit the misery of fragile populations. The jihadists, for example, recruited thousands of teenagers for use as cannon fodder in the August 2016 battle for Ramouseh, which allowed a temporary breach in the siege of Aleppo. Although unnecessary on the military level, the battle was intended to enhance the prestige of HTS, which had been reconstituted from JFS but had parted amicably with al-Qaeda leader Ayman al-Zawahiri. The terrorist organization now needs to constantly replenish its supply of suicide bombers, one of its best assets in the war. While drawing the admiration of other jihadist leaders, the suicide attacks also scare them because they know they are not immune. In his deployment of suicide attackers, HTS leader Abu Muhammad al-Julani corresponds perfectly to the portrait of the "old man of the mountain" (al-Shaykh al-Jebel) described by Bernard Lewis in The Assassins. Specifically, HTS can count on the TIP to supply large numbers of suicide bombers indoctrinated in its children's training camps near Jisr al-Shughour. Uyghur suicide bombers have already performed on the frontlines during the battle for Ramouseh.

In observing recent developments, no state actor wants to see Idlib province become a jihadist factory. Turkey, in particular, could be spurred to intervene militarily, based on the terrorist threat and Ankara's geopolitical interests. To be sure, the Turks hold the priority of preventing the creation of an entity favorable to the Kurdistan Workers Party (PKK) operating between Afrin and the Tigris River. Yet the future of Idlib is also part of Ankara's calculus, and developments there could weigh in favor of or against the Kurds. Indeed, Turkish president Recep Tayyip Erdogan has voiced his desire to create a Turkish protectorate in Idlib similar to the existing Azaz-Jarabulus corridor. Should the Turks act, their military plan might entail a strike into Syria extending about thirty-five kilometers, from Jisr al-Shughour to Bab al-Hawa, including the city of Idlib. Such a campaign would inevitably lead to a major fight with HTS, which occupies precisely the same area.

No Long-Term Plans for an HTS Emirate

Abu Muhammad al-Julani understands that once the Islamic State is defeated, the U.S.-led coalition, along with Russia, Turkey, and Iran, will turn its guns on his group. Depending on developments in the anti-IS campaign, and coordination among these external actors, Julani might have a year or two before his group's time comes. He thus understands that his principal goal is not to create a permanent Islamic emirate in the Idlib area but rather to establish a recruitment base for his army of jihadists, in accordance with the principles set out by Zawahiri: "The strategy for jihad in al-Sham [Greater Syria] must focus on a guerrilla war...Do not occupy yourselves with holding territory."

Such language explains why the international community must seek urgently to counter HTS, which grows stronger by the day, without awaiting the complete destruction of the Islamic State. International actors should not rely on moderate rebels, or Ahrar al-Sham, to achieve this goal. Indeed, the international coalition must pursue the same comprehensive approach to HTS in Idlib as it is taking to the Islamic State in Raqqa and elsewhere. Failure to do so now will entail far greater costs later.