Matthew Levitt
Matthew Levitt is the Fromer-Wexler Fellow and director of the Reinhard Program on Counterterrorism and Intelligence at The Washington Institute.
Brief Analysis

Watch an expert discussion of the jihadist challenges the next president will inherit even after the Islamic State's territorial 'caliphate' is defeated.

On October 27, Bruce Hoffman and Matthew Levitt addressed a Policy Forum at The Washington Institute as part of the Stein Counterterrorism Lecture Series. Hoffman directs the Center for Security Studies at Georgetown University and formerly served on the Independent Commission to Review the FBI's Post-9/11 Response to Terrorism and Radicalization. Levitt is the Institute's Fromer-Wexler Fellow, director of its Stein Program on Counterterrorism and Intelligence, and former deputy assistant secretary for intelligence and analysis at the Treasury Department. The following is a rapporteur's summary of their remarks.

The future trajectories of al-Qaeda (AQ) and the Islamic State (IS) do not leave cause for optimism, nor do the faulty paradigms that have been widely accepted about both groups in recent years. Five years ago, many argued that AQ was on the verge of strategic collapse: its founding leader was dead, a succession of key lieutenants had been eliminated, and the Arab Spring was seemingly poised to bring about the changes that terrorists had promised for years. Yet when Director of National Intelligence James Clapper testified before the Senate this February, he painted a bleak picture of a newly resurgent AQ that was "positioned to make gains in 2016." Similarly, IS was able to carry out major international attacks last year in defiance of the widely accepted paradigm that it was not interested in global terrorist operations. These and other past miscalculations raise concerns that the United States and its allies simply do not understand the pulse of IS or the dynamics of the broader jihadi universe.

If Osama bin Laden were alive today, he would be a happy man. He was confident that his death would produce thousands more Osamas, and in light of the ongoing global foreign fighter phenomenon, his threat has been realized. He also summoned his followers to commit attacks throughout Europe, and IS has realized that dream. The process of political rebranding that he wrote about is coming to pass as well; AQ affiliates in Syria and elsewhere have adopted different names and are often depicted as more palatable alternatives to other extremists.

Indeed, IS has seized upon the overarching strategy that a key bin Laden deputy laid out in 2005. This strategy was broken into seven phases complete with a timeline, and the first few steps occurred right on schedule -- for example, the fifth phase called for establishing the "caliphate" and was projected to take place from 2014 to 2016. Although this phase is coming to an end with the demise of the IS core, even partial fulfillment of bin Laden's strategy promotes AQ's narrative of a divinely ordained struggle ending in inevitable victory. The danger will persist with the fall of the caliphate as thousands of IS fighters try to return home.

AQ has been waiting on IS to do much of its work -- deepening fissures in the Middle East and the West -- until the time comes to rise again. This strategy was made clear as recently as last year, when a major AQ weapons stockpile was discovered in Afghanistan that rivaled bin Laden's pre-2001 arsenal. The conventional wisdom once held that the bloody split between IS and AQ would mean the end of both groups, but instead their competition resulted in even greater violence and chaos as IS sought to seize the mantle from its predecessor. If the IS core falls, the group will likely default to its international terrorist capabilities and perhaps heighten its efforts to outdo AQ. Reunification between the two groups remains a possibility as well given their relatively small ideological differences and behind-the-scenes conciliatory gestures -- their existing divides are rooted in a clash of egos more than anything else. Thus, the fall of IS could drive senior leaders back to AQ or, failing that, make the weakened group vulnerable to a hostile takeover.

Terrorism is a war of attrition, and the West is losing. Western societies are rife with disillusionment over the seemingly endless struggle, breeding political fissures and xenophobia. Terrorists are primed to take advantage of such divides, and their capabilities are growing faster than government security forces can be trained up. To combat this threat, Washington and its allies need to target the various AQ and IS branches that allow the core groups to bring local populations and resources under their control, while also preventing the creation of new branches.

The West faced a growing international terrorist threat before the rise of IS, so the group's demise will not be a panacea; tomorrow's bin Laden is probably a teenager already in Iraq or Syria. The delay in addressing IS played no small part in the creation and expansion of the caliphate, and after it dissolves, IS operatives will reorganize as insurgents in Anbar, Diyala, and other core areas. In addition, some operatives may head to the group's "provinces," though the resilience of these branches may vary from country to country.

Most important, as long as Syria remains an open sore, the group can continue to exist there and use the conflict as a recruiting beacon. Before IS arose, foreigners were already traveling to Syria to defend fellow Sunnis against the Assad regime's atrocities. As the violence continued, more fighters joined wealthier and better-equipped AQ affiliates, where they were exposed to radical ideologies. The establishment of the IS caliphate only exacerbated the problem, since the group offered fighters the opportunity to be a part of historic work -- an empowering narrative that allowed many disenfranchised individuals to go from "zero to hero." This could not have been clearer than in a phone call intercepted by Belgian police after the November 2015 Paris attacks. The caller, a Belgian militant in Syria, asked what people in the Molenbeek district of Brussels were saying about his friend Bilal Hadfi, a suicide bomber in Paris: "Are they praising him? Are they saying he was a lion?" Thus, while some radical jihadist "pull" factors will dissipate without an idyllic caliphate, many of the "push" factors will remain.

As for the eight recognized IS provinces, they may face hardships post-caliphate. The Washington Institute's recent conference on this subject led to three basic conclusions (which will be discussed at length in a soon-to-be-published compendium edited by Katherine Bauer). First, the provinces are not created equal -- some have waged successful attacks on Western interests, while others exist only on paper (e.g., in the Arabian Peninsula); some operate in ungoverned areas, while others are under strain from state security forces. Second, the symbolic value of establishing global affiliates may be more important than their actual success. Third, the staying power of some provinces depends on resources from the core.

On the latter note, a caliphate on the decline obviously has a harder time directing resources to its periphery. Some groups pledged their allegiance to IS based on the expectation of receiving wealth and experience from the core, and it is an open question what will happen should those resources stop flowing. Preexisting groups that rebranded themselves as IS provinces will likely revert back to their old names. Individual fighters recruited from local organizations, such as al-Qaeda in the Arabian Peninsula (AQAP), might rejoin their former groups, as evidenced by the public rifts within the IS Yemen branch.

For its part, AQ has grown and changed and is no longer organized in a rigid top-down structure. Its relationship with IS remains frayed, but tactical relationships continue.

More broadly, Islamist radicalization is in hyper drive, and many of the factors that are stimulating it will not be diminished with the fall of IS. The region faces sophisticated online encryption, failed and weak states post-Arab Spring, and a heavy layer of sectarianism. Accordingly, the potential for lone-offender attacks there and abroad has increased. According to Secretary of Homeland Security Jeh Johnson, we now live in a world where terrorism is "carried out by those who live among us in the homeland and self-radicalize, inspired by terrorist propaganda on the Internet."

Yet "lone wolf" diagnoses are often incomplete because IS makes explicit calls for lone-offender attacks, and these calls have had a measurable effect. In the United States, there are currently about 1,000 open investigations into potential homegrown extremists in all fifty states, a sharp increase from just a few years ago. The term "lone wolves" is also a misnomer because evidence indicates that these individuals are often known wolves -- their radicalization is usually noticed by those around them. Authorities increasingly view homegrown extremists on a spectrum, with actors in explicitly directed attacks on one end and lone-offender/self-inspired actors on the other. Rarely are cases clearly on one side of the spectrum.

From this standpoint, a victory in Mosul and the demise of IS in Iraq will not win the war. Political and security grievances in the region have worsened. Before IS and the Syria crisis emerged, the director of national intelligence spoke of the region's "looming disequilibria" in the Global Trends 2030 report. Many of the worst-case scenarios in that report have now been realized, with open sores in Syria, Libya, Yemen, and elsewhere setting the stage for serious problems in the long term.

This summary was prepared by Maxine Rich. 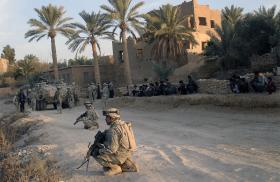