The Muqawama Are Focusing Attack Claims on U.S. Bases in Syria

Iraqi militias have said more about attacking such bases in the past six weeks than they did in preceding years.

In recent weeks, the Iraqi muqawama (resistance) media space has shown an increased interest in U.S. military bases in east Syria. Telegram channels and Twitter accounts affiliated with militias have begun reporting on alleged attacks against bases near Hasaka and oil fields in the vicinity of Deir al-Zour. The reporting is often accompanied by images and videos (generally taken from a distance and likely sent in by militia sympathizers).

Militia-affiliated channels have also more openly taken credit for attacks. Claimed operations against U.S. locations at al-Shadadi, al-Omar oil fields, and Conoco oil fields have been listed in “round up” posts summarizing all muqawama attacks in July, alongside more typical attacks on al-Asad Air Base and locations in Baghdad (July 22, 2021).

While militia channels have previously reported occasional attacks on Syrian locations, such reports were comparatively rare prior to this summer. Since mid-June, however, propagandists have reported on at least six separate events:

Additionally, some channels have demonstrated growing interest in the comings and goings of heavy goods vehicles traveling to and from muqawama-identified U.S. positions in northeast Syria. Postings relating to attacks on Syria are made by channels and accounts affiliated with all major Iraqi muqawama militias, including Kataib Hezbollah, Asaib Ahl al-Haq, the Badr Organization, and Harakat Hezbollah al-Nujaba. Of these, the accounts apparently linked to al-Nujaba are particularly active in reporting on attacks inside Syria.

The claimed spike in Syrian attacks coincided with an escalation of muqawama attacks on U.S. points of presence in Iraq. This escalation took place in response to U.S. airstrikes on Kataib Hezbollah and Kataib Sayyid al-Shuhada positions on June 28.  It is clear from coverage of these attacks that muqawama propagandists believe the Syria attacks to be the work of muqawama militias.

It is possible that this spike in attacks represents more than just an Iraqi muqawama escalation against the coalition spilling over the border into Syria. On June 28, in the immediate aftermath of the U.S. airstrikes in Iraq and Syria, senior KH leader Abu Ali al-Askari posted a statement condemning the U.S. strike: “Let the occupation know that Iraq has men of great strength who are the guardians of the blood [awliya al-dam] of every oppressed Iraqi. The brave resistance mujahideen brothers must work to break the thorns of this arrogant tyrant and stuff his nose with dust, by increasing the pace of jihadi operations and raising the caliber of the strikes—in a continuous and focused manner—on the hidden joints in the bases and headquarters of the enemy.”

This statement appears to have presaged an expansion (even if temporary) in the scope and scale of muqawama attacks. The rise in attacks—and media focus—on east Syria suggests that this expansion included greater efforts against U.S. targets outside Iraq’s borders.

On July 27, Kataib Hezbollah went a step further in demonstrating a role in Syria attacks. In an interview with the BBC, Jafar al-Husseini—another KH spokesman—confirmed that U.S. bases at al-Omar oil field and al-Tanf had been attacked by Iraqi militias: “The efforts of the armed groups [fasail] are not only focused on [U.S. troops] in Iraq. We look at a very important matter [and that is] to expel the U.S. forces from West Asia...Any base in any country, Arab or non-Arab countries, that could be used by the Americans...to launch attacks inside Iraq could be targeted [by us]."

If such statements have been backed by action, this means that Iraqi militias—formally part of the Iraqi state through the Popular Mobilization Forces (PMF)—continue to travel to Syria without authorization from the legal chain of command and, once there, attack a partner nation’s forces.

Of course, Iran's Islamic Revolutionary Guard Corps (IRGC) has greater freedom of movement in east Syria than it does in Iraq, and appears to have committed itself to maintaining a presence at the Imam Ali Camp on the Syrian side of the Iraqi border, just across the Euphrates River from many of the targeted U.S. positions. Increasing pressure on the U.S. presence in Syria—whether by using its Iraqi militia proxies directly or as facades for IRGC Qods Force activity—might well serve the Tehran’s strategic interests at this time. 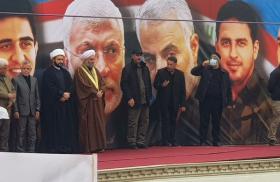