by David Makovsky
Also available in
About the Authors

David Makovsky
David Makovsky is the Ziegler Distinguished Fellow at The Washington Institute and director of the Koret Project on Arab-Israel Relations.
Brief Analysis

New maps explore the scope of Israel’s potential moves next month, though domestic politics, unprecedented Gulf warnings, and other factors are raising questions about whether annexation will actually proceed.

Israeli prime minister Binyamin Netanyahu has repeatedly declared that he will be putting forward his proposal for West Bank annexation as early as July 1. Yet uncertainties about his plans still abound, indicating that this timetable may not be met despite his assertions to the contrary.

Many of these uncertainties are political, related to Israeli domestic dynamics surrounding specific territories, the Trump administration’s intentions, the widespread international opposition to the move, and Netanyahu’s lack of response to the plethora of arguments against the idea. Initially, he appeared keen on moving forward with annexation before the final stages of the U.S. presidential campaign pick up in the fall, but there is speculation that since his government coalition is brand new, it needs time to work out the details—for example, the Justice Ministry reportedly has not come up with the necessary legal groundwork for any such move.

Underlying these political uncertainties is the lack of an agreed map. If Netanyahu is so intent on proceeding soon, what exactly will Israel be annexing? How much area is affected, and how many Israelis and Palestinians are included in various annexation permutations?

Three scenarios seem most likely, all based on the conceptual map included in the Trump peace plan earlier this year. (For maps and data related to this plan and other Israel-Palestinian scenarios, see The Washington Institute’s interactive site Settlements and Solutions.) 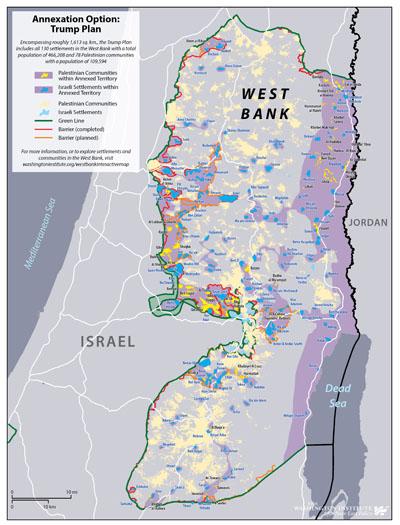 In this scenario, Israel would annex all 130 settlements in the West Bank as envisioned in the Trump plan. Notably, 15 of them (coined “enclaves” in the plan) would lie within the future Palestinian state but be under full Israeli control.

How many settlers? These 130 settlements contain 466,208 settlers, including:

How many Palestinians? The annexed territory would contain 78 Palestinian communities with 109,594 residents (4.5% of their total West Bank population), including:

Netanyahu recently stated that if Palestinians in the Jordan Valley come under Israeli sovereignty, they would still vote in Palestinian Authority elections and hold no rights in Israel. He has not indicated whether the same status would apply to Palestinians in other annexed areas.

Impact. If Israel formally and permanently incorporates 29% of the West Bank, 78 Palestinian communities, and over 109,000 Palestinians, it would greatly complicate any future effort to disentangle the two peoples, achieve true separation, and ultimately move toward a two-state solution. This scenario therefore raises questions about Israel’s identity and whether it might doom itself to becoming one state for two peoples.

Moreover, annexing the Jordan Valley would anger Amman, given the risk of instability posed by West Bank Palestinians potentially migrating to the kingdom en masse out of a belief that a two-state solution is impossible. Former Israeli security officials believe that the existing security cooperation with Jordan is highly successful in halting any smuggling of weapons or militants from the valley. Many have publicly expressed their fears of annexation and its deleterious impact on that relationship. 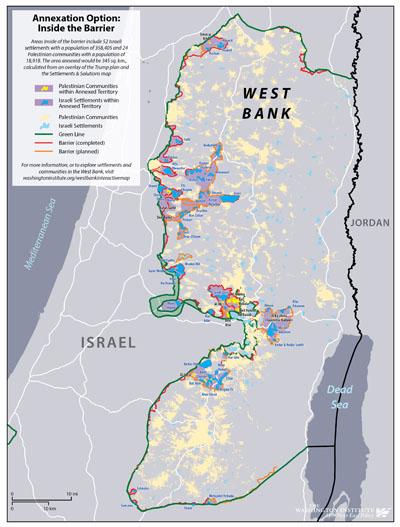 OPTION 2: ALL BLOC SETTLEMENTS INSIDE THE BARRIER

This scenario would annex the large, heavily populated blocs of Israeli settlements located just inside the security barrier.

How many settlers? The 52 bloc settlements contain the majority of Israeli settlers: 358,405, or 77% of the total.

Area. The blocs comprise 345 square kilometers, or about 7% of the West Bank.

Impact. These settlements are considered more consistent with what Israel would receive as part of a potential two-state solution. Yet annexing them now would still spur substantial international opposition given the unilateral nature of the move and the fact that it might pave the way for further annexations. Some wonder whether front-loading annexation of the blocs would diminish Israel’s incentive to make land concessions to the Palestinians down the road. 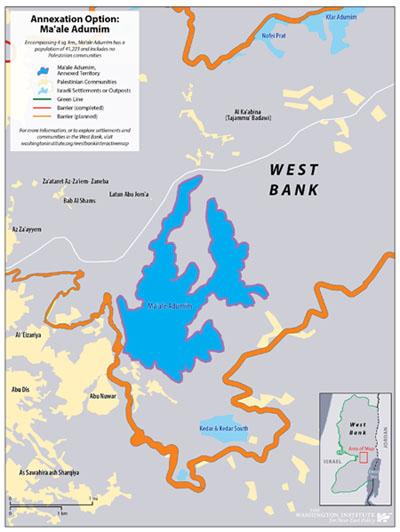 This scenario could involve a single large settlement or bloc, perhaps Gush Etzion (located south of Jerusalem) and/or Ma’ale Adumim (east of Jerusalem). A handful of other settlements near the 1967 Green Line could be included as well.

How many Palestinians? The specific number would depend on which Israeli settlement areas are annexed, but in all cases it would be significantly less than options 1 and 2.

Impact. This narrower annexation would focus on settlements that even some Palestinian negotiators have conceded will one day become part of Israel—for example, leaked documents show that Gush Etzion was included on Palestinian maps of Israel during talks in 2008. Then again, these potential concessions were conceived in return for a fully negotiated Israeli-Palestinian peace, not as an unprecedented, internationally opposed, unilateral annexation.

This option is widely associated with Israeli defense minister Benny Gantz (who is slated to serve the second half of the new coalition’s rotating premiership starting late next year) and Foreign Minister Gabi Ashkenazi. Their views have been boosted by the Trump administration’s reported preference that he reach consensus with them on annexation. In the push and pull of Israeli politics, will the Gantz/Ashkenazi focus on a narrow approach and Netanyahu’s maximalist vision result in annexations that fall somewhere in the middle? 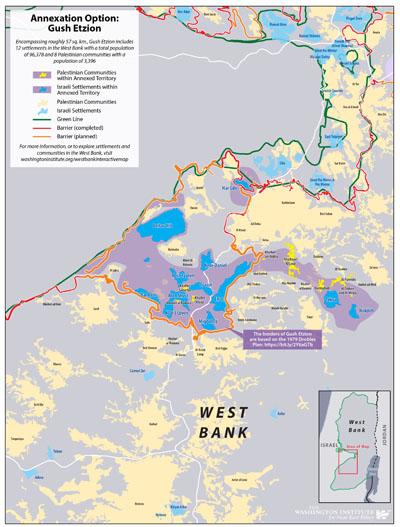 The Trump administration’s views on annexation seem to fall into three schools of thought:

So far, this array of views has crystallized around the idea of ensuring that Netanyahu, Gantz, and Ashkenazi are all on the same page. The latter two men are former military chiefs of staff, and this background could provide domestic political cover for any U.S. decision. Moreover, by empowering the Gantz-Ashkenazi camp—which holds far fewer parliamentary seats in the coalition than Netanyahu’s camp—Washington has made it more difficult for the prime minister to fulfill the expectations he has raised among his right-wing base for full annexation encompassing 29% of the West Bank.

As for public opinion, in a Channel 12 poll asking Israelis to name the new government’s most important priority, only 5% of respondents selected annexation, well below the COVID-19 pandemic and the country’s economic situation. Elsewhere, a poll by the respected Israel Democracy Institute found that 50% of Israeli respondents and 57% of Israeli Jews favor annexation in general terms—yet almost 60% of them believe it will lead to a large-scale Palestinian uprising. The approval numbers could shift once a map is put forward and the tradeoffs are more apparent—for example, another recent poll found that support dropped when people were asked how they would view annexation if it undercut Israeli-Jordanian relations.

Finally, Netanyahu still needs to respond to the many foreign leaders who have argued against annexation for a host of reasons: its potential to lead to West Bank violence or even the collapse of the Palestinian Authority; the destabilizing effects it could have on Jordan; the fact that even the United States is divided on the issue; the possibility that it may spur formal European recognition of a Palestinian state based on the 1967 lines; and the impact it might have on the International Criminal Court, which is currently deciding whether to assert jurisdiction over a case involving Israel.

The latest salvo came on June 12, when Emirati ambassador to Washington Yousef Al Otaiba wrote a front-page op-ed for the leading Israeli daily Yediot Aharonot—an unprecedented step for any current Gulf official. In it, he essentially told Netanyahu and other officials that they had to choose between annexation and “improved security, economic and cultural ties with the Arab world”—in other words, they cannot have both. Combined with other deep uncertainties and the lack of an agreed map, such warnings suggest that the July 1 timetable for annexation could easily come and go without any actual territorial changes.

David Makovsky is the Ziegler Distinguished Fellow at The Washington Institute, where Basia Rosenbaum is a research assistant and Lauren Morganbesser is a research intern.