The Kurdish Path to Socialism in Syria

To maintain its dominant position and stay true to its ideological roots, the PYD is pushing socialist policies on a skeptical Rojava populace, with uncertain consequences for the future of the Syrian Kurdish zone.

In northern Syria, the Kurdish Democratic Union Party (PYD) aims to promote a political and economic system based on self-sufficiency and local democracy. Yet a closer look at the measures being implemented reveals a clear effort to apply the anti-capitalist ideology of Abdullah Ocalan, leader of the Kurdistan Worker's Party (PKK). It remains unclear whether this ideology is compatible with local economic conditions, however, and Kurdish authorities might resort to full normalization with the Assad regime instead if key stakeholders resist.

Ocalan has written a series of books proposing a societal model for the Kurdish people. His "Ocalanism" was directly inspired by American social theorist Murray Bookchin, a radical leftist who wanted to break down capitalism through "libertarian municipalism." Bookchin believed that capitalism's fatal flaw lay in its conflict with nature -- that is, by destroying the environment, capitalism will inevitably create a major crisis and consume itself. In his first book on radical ecology, he recommended the decentralization of polluted metropolitan centers and pesticide-ridden industrial farms so that people could live on a smaller scale, produce their food locally, use renewable energy, and manage their own affairs.

On the latter front, he recommended democratizing urban neighborhoods by empowering citizen assemblies. These assemblies could then confederate at different levels: city, region, former nation, and so forth. They would send delegates to confederal councils to coordinate and administer policy. Power would be based among the people, who would be directly represented at the top. In time, he theorized, confederal municipalities would become a counterweight to the nation-state and capitalism would naturally disappear. Municipalities would expropriate major economic resources and "municipalize" the economy, which the community would take possession of.

Bookchin's model is close to Maoism, Ocalan's principal early source of inspiration. Unsurprisingly, the PKK leader became Bookchin's ideological disciple in 2004 after reading several of his works. A year later, at the group's 2005 congress, he made "libertarian municipalism" the official PKK political ideology.

COMMUNES AS BASE POLITICAL UNITS

The PYD seeks to implement Ocalan's municipalist principles in northern Syria. Although the party does not officially plan to build a Kurdish state or even an autonomous area there, it does seek to create a democratic and ecologically responsible society within the framework of a federal system. 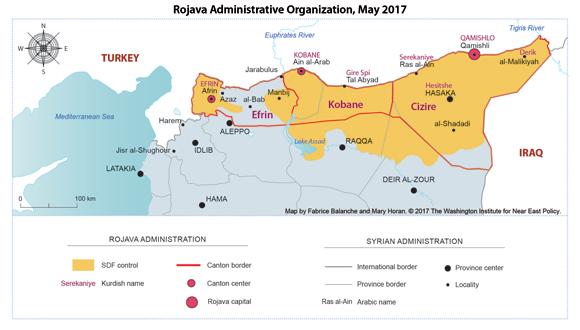 In 2013, the PYD began to administer territories under its control by establishing the Movement for a Democratic Society (TEV-DEM), a coalition of civil associations and political parties such as the PYD, the Syriac Union Party (SUP), the Syrian Kurdish Democratic Peace Party (PADKS), and the Kurdistan Liberal Union Party (PYLK). The Kurdistan Democratic Party of Syria (PDK-S) and other members of the Syrian Kurdish National Council (ENKS) are not part of TEV-DEM; rather, they are regarded as political enemies.

In November 2013, TEV-DEM announced the creation of its own autonomous administration: Rojava, which is divided into three cantons, Jazira ("Cizire" in Kurdish), Kobane, and Afrin. At the head of each canton is a Kurdish prime minister assisted by two vice prime ministers, most of whom are non-Kurdish (e.g., Sunni Arab or Christian). Although the PYD is an avowedly Kurdish party pursuing a clear ethnosectarian policy, Rojava's prime ministers are careful to respect diversity. 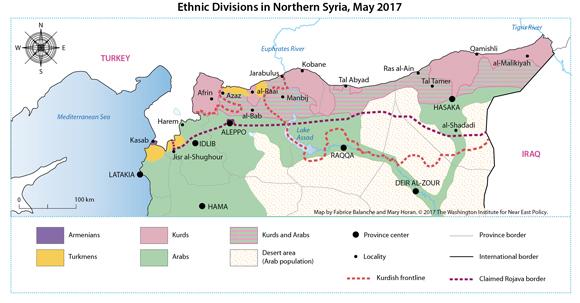 The three cantons are supposed to be governed by an elected assembly that controls Rojava's executive bureau, but elections have not yet taken place. TEV-DEM scheduled them for an unspecified day in 2017, contrary to Bookchin's model of creating municipalities that elect delegates to confederal councils. In Rojava, such municipalities are known as communes ("komun" in Kurdish), each containing roughly 150 houses and around a thousand inhabitants. An elected communal council manages relations between individual villages and the established authorities who still run local public services such as water and electricity, since the administrative framework of the prewar municipalities has not disappeared. Ideally, new municipalities would arise naturally from the communes, but in reality the new and old structures exist in parallel. The communes deliver certificates to the population for bread and fuel at low prices; they also supervise the local community and participate in its political education. This corresponds roughly with the village "committees" of Communist China.

In addition, Rojava's communes are supposed to organize economic life by promoting cooperatives. In the countryside, farmers are organized in groups of fifteen and asked to work together and exchange surplus production with other cooperatives, including in the cities. This practice is in line with the goal of designing communes to be self-sufficient, with the eventual aim of eliminating traders and money while establishing a bartering system.

Yet skepticism is warranted about the principles behind these measures and their application on the ground. Until recently, the war's economic disruption pushed Rojava's population to organize a subsistence economy, and the Kurdish zone's isolation created practical reasons to favor self-sufficiency. Yet now that overland links are reopening, this policy can only be justified on the ideological level.

In the agricultural sector, the new authorities in Jazira want to reduce the canton's share of cereals and cotton, the main crops produced in the area, in order to make room for activities that would make local communities more self-sufficient in feeding themselves, such as market gardening and arboriculture. To effect this change, large estates and public lands need to be entrusted to the population and organized in cooperatives. Yet the people seem unlikely to embrace this new economic system. The TEV-DEM program could seduce the landless peasants of Jazira, to whom the PYD plans to distribute former public domains, but it is unpalatable to existing owner-farmers, who would no doubt prefer to continue working individually. Moreover, market gardening requires much greater personal investment than cereal farming, which is hardly compatible with the collectivist spirit the PYD has sought to inculcate.

Meanwhile, industry is almost absent from all of the cantons, mainly because the Assad regime preferred to keep things that way for "security reasons." For instance, only two cotton mills were built in the Hasaka area of Jazira. This means Rojava authorities will not have to nationalize any factories -- but only because such facilities are nonexistent. To fill this gap and meet local needs, they would like to develop agro-food and manufacturing industries. They might also try to make fuller use of local oil resources (estimated at 150,000 barrels per day in 2011), which would require foreign investment.

Yet attracting investors into such an anti-capitalist system would be difficult. Entrepreneurship is encouraged in Rojava, but only within the framework of cooperatives. Similarly, engineers and technicians are needed to work for the "revolution," but individuals who have the necessary degrees and training tend to leave Rojava because salaries are too low there. Moreover, many young men fear conscription and prefer to take refuge in Iraq. The middle classes in particular are experiencing this demographic hemorrhage, since liberal professionals and entrepreneurs are largely excluded from the economic system currently being set up.

The application of Ocalan's theories is still modest in Rojava's economic sphere, as the PYD is aware that it risks alienating a large part of the population, especially those who only rallied to the group for fear of the Islamic State. The reopening of land communications with the Assad regime zone in western Syria is encouraging a return to the lucrative exportation of cereals and cotton. Moreover, manufactured goods from the regime zone will likely flood Rojava markets before any local production could develop. Accordingly, local authorities may resort to protectionism to defend the cantons economically, perhaps by imposing tariffs and cutting off the western Syrian market.

If the PYD's cooperative economic system fails due to these pressures, the party would have two choices: coercing locals into accepting Ocalan's theories, or declaring a "pause" in implementation due to wartime circumstances, much like Vladimir Lenin did with the Soviet Union's New Economic Policy in 1920. In the first case, the "communalization" of Rojava's economy would entail the expropriation of property belonging to certain social groups, namely, constituencies that are deemed opponents of the PYD. This property would then be redistributed to the party's own base with the objective of strengthening its influence and eliminating the Assad regime's. Such efforts would also indicate a separatist mindset, despite the federal model the PYD has been outwardly promoting.

In the second case, a "pause" in economic collectivization would likely spur the PYD to renounce its intention of changing Rojava society and agree to normalize relations with Damascus. The Kurdish cantons would then be reinstated in the Syrian economic space and the impediments to private initiative lifted. Whichever approach the party chooses, the local population -- Kurdish and non-Kurdish -- will be more inclined to accept the pursuit of some form of autonomy if their living conditions improve.

Brief Analysis
Reactions of Palestinian Media and Political Leaders to Biden’s Visit to the Region
Sep 26, 2022
◆