Iranian Casualties in Syria and the Strategic Logic of Intervention

by Ali Alfoneh, Michael Eisenstadt
Also available in
About the Authors

Iran's battlefield losses have continued even after the drawdown of forces it surged into Syria late last year and the subsequent 'cessation of hostilities,' raising questions about Tehran's strategy and tactics in the war.

Tehran's military intervention in Syria is a unique event in the history of the Islamic Republic. Reviewing the scope and nature of this intervention and analyzing death notices for Iran's military personnel and members of its "foreign legion" -- Shiite militias from Lebanon, Iraq, Afghanistan, Pakistan, and Syria -- provide revealing insights into the strategic logic guiding its decisionmaking.

Following the first "Arab Spring" protests in Syria in 2011, Tehran provided the Assad regime with crowd-control gear, Internet surveillance technology, and advice on how to handle demonstrations. Yet when the regime's violent response to the protests spawned a bloody civil war later that year, Iran pressed Hezbollah to send personnel to Syria and also deployed members of its own Islamic Revolutionary Guard Corps-Qods Force (IRGC-QF). Although Tehran called the Qods Force personnel "advisors," an IRGC video captured by the Syrian opposition around August 2013 made clear that they were often involved in combat. Iran subsequently oversaw the deployment of Iraqi (2012), Afghan (2013), and Pakistani (2014) Shiite militiamen to Syria.

By summer 2015, Iran reportedly had 700 "advisors" in Syria (primarily from the Qods Force and IRGC Ground Forces), while Hezbollah deployments were estimated at 4,000-5,000 advisors and fighters. In early September -- coinciding with Russia's military intervention in Syria -- Iran reportedly launched a "surge," sending 2,300-2,500 IRGC troops for a total of about 3,000 personnel. These surge forces began redeploying to Iran in November, and nearly all of them were believed to have returned home by February. Yet 160 Iranians were reportedly killed and 300 wounded during this brief deployment -- a remarkably high casualty rate of roughly 5 percent per month.

On February 25, Secretary of State John Kerry told a congressional committee that "the IRGC has pulled its troops back from Syria." Losses continue to mount among the 700 Iranian personnel who remain in Syria, however, and death announcements indicate that their ranks still include Qods Force and IRGC Ground Forces personnel.

The prominent combat role assigned to Shiite fighters in Syria becomes clear when one surveys media reporting on funeral services held in Iran and Lebanon for Afghans, Iranians, Lebanese, and Pakistanis killed in action. (The presumably substantial Iraqi Shiite fatalities are not included in this analysis because reliable data is not available for them.)

Since acknowledging its first combat fatality in January 2012, Iran has admitted to losing more than 340 IRGC personnel in Syria. The first acknowledged fatalities for various contingents have occurred at different times over the past four years: IRGC-QF in January 2012, Hezbollah in September 2012, Afghan Shiite sometime prior to September 2013, IRGC Ground Forces in July 2014, and Pakistani Shiite sometime prior to February 2015.

As the losses mounted, Iran progressively broadened its recruitment base for advisors/combatants. At first it deployed a significant slice of the IRGC-QF, including senior personnel; indeed, several Qods Force generals have been killed in combat. Over time, the IRGC-QF likely became overstretched due to its other responsibilities in Lebanon, Iraq, and Yemen, requiring the commitment of IRGC Ground Forces and Basij militiamen to Syria. And earlier this month, Iran announced that members of its regular ground forces (Artesh) were now serving as advisors in Syria (though with no known casualties to date).

Excluding Iraqi casualties, Iran's Shiite coalition incurred at least 1,530 combat fatalities in Syria between January 19, 2012, and March 8, 2016. Hezbollah fighters account for more than half of those losses (878), with Iranian nationals about a quarter (342) and the remainder divided among Afghans (255) and Pakistanis (55). These numbers should be considered an absolute minimum given the possibility that the parties are not disclosing the full extent of their involvement and losses. 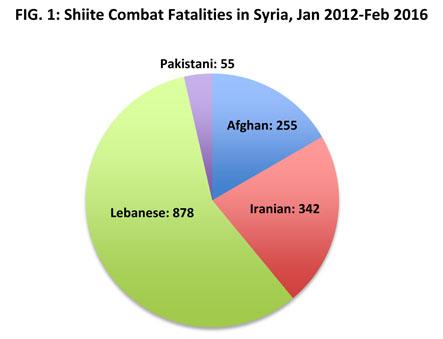 Since Russia's airstrikes began on September 29, 2015, the number of IRGC personnel killed in Syria has spiked, as have Afghan and Pakistani losses. Interestingly, Hezbollah combat losses dropped throughout this period, but jumped to twenty-six in February. Iranian losses likewise further spiked that month, reaching a record high of fifty-eight. Most of the Shiite coalition forces lost in February were killed while breaking the rebel siege on the villages of Nubl and Zahra north of Aleppo. 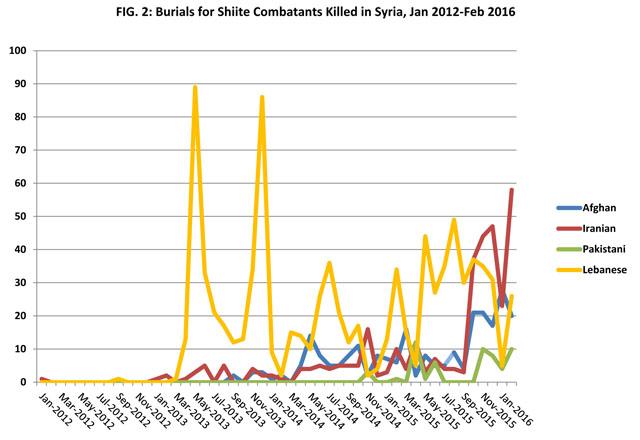 A day-by-day survey of fatalities is difficult because it is not always clear if casualties are being reported on a timely basis. For instance, the December 2013 peak shown in figure 2 is misleading because the sources announced nearly a hundred fatalities all at once, even though the actual month of death/burial for many of them occurred earlier. That said, the data shows continued losses after February 22, 2016 -- the date the United States and Russia announced a nationwide "cessation of hostilities" that took effect a week later -- indicating that combat continues in a number of areas. 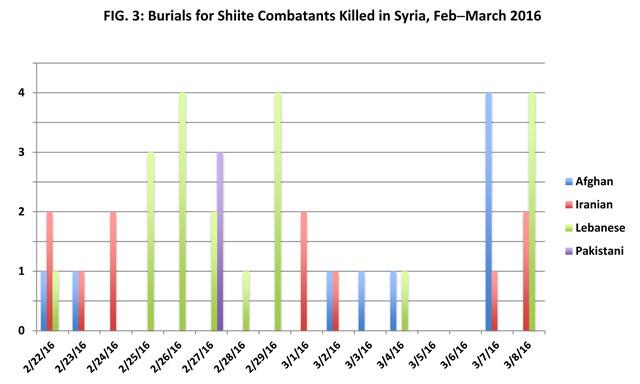 A number of conclusions -- some necessarily speculative -- can be drawn from these findings. First, Iran has never committed more than the minimum force necessary to keep Bashar al-Assad in power, so one cannot say that it has been militarily "all in" when it comes to supporting its Syrian ally. Except for the relatively small Qods Force, Iran has deployed only a tiny slice of the 100,000-man IRGC Ground Forces and the 350,000-man Artesh. (By contrast, about a third of all U.S. Army and Marine units were deployed to Iraq and Afghanistan at times in the last decade.)

What are the reasons for this approach? Whenever possible, the Islamic Republic will limit its own exposure and losses by fighting to its last non-Iranian proxy, even when its own personnel would be more effective. Using proxies also enables Iran to deepen its ties with the societies these fighters are drawn from and expand its options for projecting influence in the region. In addition, Tehran may be trying to minimize the potential for domestic backlash -- while polls of Iranians show strong support for fighting the Islamic State, there is less robust support for propping up the Assad regime.

In summer 2015, when the tide of war appeared to be turning against Assad, Tehran convinced Moscow to intervene, effectively enlisting Russia as a "great power proxy" to do the heavy lifting required to save the regime. Although Iran conducted a brief surge of its own during this period, it was able to withdraw these forces just a few months later, once the game-changing introduction of Russian firepower helped the pro-Assad coalition regain the upper hand against the rebels.

Although Tehran is strategically risk averse, it has been tactically risk tolerant in Syria. Various evidence, including the heavy losses suffered by its forces prior to the 2015 surge, indicates that Iran's "advisors" often participate in combat. A number of other factors may also be contributing to the high death toll:

The spike in reported Iranian losses this February -- after the drawdown of its surge forces and the supposed ceasefire -- also raises a number of questions. Did Tehran simply delay the reporting of combat deaths that occurred at the height of the surge in order to soften their domestic impact? Or did the increased losses result from military factors such as a change in the rules of engagement or an increase in the tempo of operations as ceasefire negotiations intensified, perhaps to create leverage over the rebels? The answer is not clear at this time, though the ongoing Iranian death notices -- with three more reported this week alone -- show that Qods Force and IRGC Ground Forces personnel remain very much in the fight.

All that can be said with confidence at this time is that Tehran's strategy of using proxy warfare to manage risk and limit exposure in Syria has succeeded thus far. Should widespread fighting resume, the future success of this strategy will depend on Iran's continued ability to find Shiite proxies to serve as cannon fodder -- to keep its own losses down -- and Russia's cost/benefit calculus. This will also make it difficult for the manpower-short Assad regime and its casualty-averse foreign allies to retake territory far removed from the Syrian rump state, which now controls the coast and most of the country's urban spine in the west. Therefore, Syria's current partition into areas held by the regime, the rebels, and the Islamic State is likely to persist for a long time to come. This, however, serves Tehran's interest: that Syria remain in a permanent state of crisis or civil war, in need of continued Iranian support.

Ali Alfoneh is the author of Iran Unveiled: How the Revolutionary Guards Is Turning Theocracy into Military Dictatorship (AEI Press, 2013). Michael Eisenstadt is the Kahn Fellow and director of the Military and Security Studies Program at The Washington Institute.