A Half-Million Syrian Returnees? A Look Behind the Numbers

Closer examination reveals that far more refugees are leaving Syria than coming home and that security and corruption represent major obstacles to their return.

On June 30, the Office of the UN High Commissioner for Refugees (UNHCR) reported that nearly one-half million Syrians had returned to their homes between January and May 2017. The report expresses optimism that millions could return if "peace and stability in Syria increases." A research mission by this author to Lebanon focusing on Syrian refugees, however, prompts much circumspection about whether or not Syrians should be returning at all, even if the pipe dream of peace becomes a reality. 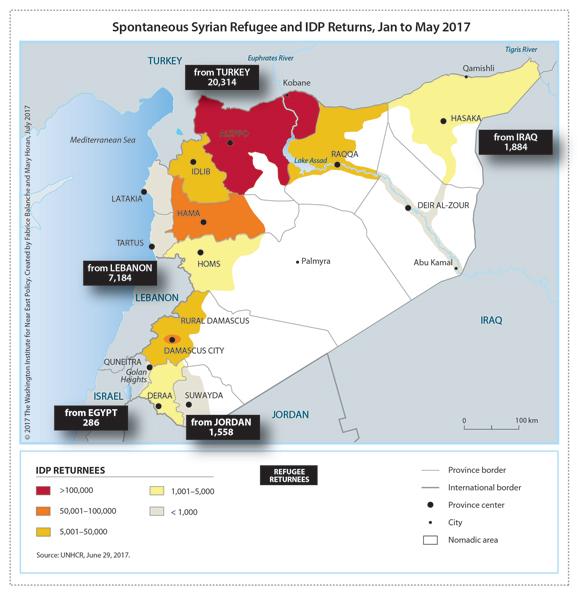 The first point to emphasize in analyzing the recent UNHCR figure is that 443,000 returnees are actually internally displaced persons (still living in Syria), out of a total 6.3 million IDPs registered. Just 31,000 were refugees (living outside Syria), who had fled to neighboring countries (Lebanon, Turkey, Iraq, Egypt, and Jordan). Moreover, even as a small number of refugees return to Syria, the number of exiting refugees continues to rise at a greater rate, a reality caused largely by persistent instability throughout the country. Between January and May 2017, the number of registered Syrian refugees increased from 4.9 million to 5.1 million, according to the UNHCR. While the IDP figure has been declining steadily from 7.5 million since the fall of 2015, anyone assessing such trajectories must be extremely careful to account for manipulation of data for political purposes.

The concept of IDPs is much broader than that of refugees, entailing anyone who has left home -- and who, in turn, might have traveled very short or longer distances. Indeed, shorter distances create a greater likelihood of return. Among the returnees recorded by the UNHCR, several hundred IDPs living in West Aleppo came back to East Aleppo, and suburban Damascus IDPs returned to al-Qabun or Qudsaya when these areas were reoccupied by the Syrian army in fall 2016. A similar phenomenon may play out after Raqqa is reclaimed from the Islamic State. By contrast, for the rebel-oriented families of Daraya, the al-Waar district of Homs, or Zabadani -- who were sent to Idlib following an agreement with the regime -- little chance exists for an imminent return to their homes.

A complicating factor in this discussion is that the UN Office for the Coordination of Humanitarian Affairs (OCHA), the entity responsible IDPs, does not conduct the census itself. Instead, Syrian government administrators and rebels alike overestimate their IDPs to obtain maximum food aid and prove that each respective camp controls the majority of the population. Such manipulations led OCHA to reassess its statistics in fall of 2015, with the result being a substantial drop in the estimate from 7.5 to 6.5 million IDPs. According to UN sources, the IDP data suggests rebels inflated their numbers more than government officials did. Such variance may seem logical given that many residents fled to regime-controlled areas for security, unless they were involved in the insurrection. The government areas offered greater security because they were not subjected to frequent aerial bombardment or embargoes and because public services were maintained. 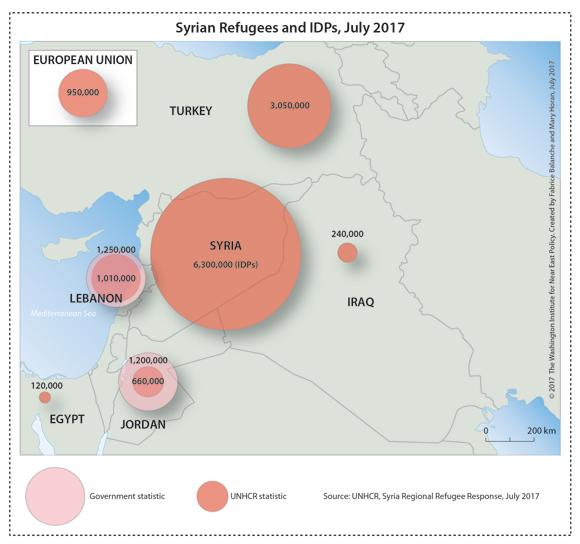 As compared to Syria, refugee data from UNHCR and the Disaster and Emergency Management Presidency of Turkey (AFAD) -- the Turkish organization in charge of the refugees -- is more reliable. Both organizations take seriously registration of applications, and neither skews its data. Potentially driving down figures is the reality that many refugees do not want to be registered. In Lebanon, a study conducted by Beirut's Saint Joseph University showed an underestimation of refugees by 23 percent in 2016. Among this proportion, many are no longer registered because single refugees or those without small children, for instance, are usually ineligible for humanitarian aid. Moreover, most Syrian refugees who came to Lebanon after 2015 are ineligible for humanitarian assistance and therefore have less incentive to stay in their adopted country. Nor do refugee cards exempt them from residence permit taxes -- $200 per year for those older than fourteen. Many Syrians thus obtain fake employment contracts, even though the bosses providing such fraudulent paperwork are often simply smugglers. This helps explain why the actual number of Syrian refugees in Lebanon seems not to decrease, with the situation in Syria still discouraging their repatriation.

Factors Complicating a Return to Syria

The main obstacle to return remains lack of security. This perception varies according to geographic origin, socioeconomic level, and, of course, potential involvement in resistance to the Syrian regime. However, a common thread links all Syrian men ages fifteen to forty-five: fear of being conscripted into the Syrian army or rebel groups or the larger Syrian Democratic Forces, depending on their place of residence. Many families still therefore prefer to leave Syria preemptively when their sons approach their eighteenth birthday, the age of conscription. As long as the fighting keeps up, refugees will continue to flow out of the country -- and the return of significant numbers will be limited. Once the fighting is over, only amnesty could reassure the hundreds of thousands of "deserters."

Corruption from Syrian officials is the second reason for staying in Lebanon. For their part, men do not dare return to Syria for fear of being arrested arbitrarily and having to pay a large sum to be released. One interviewee in Lebanon related that he'd had to pay $3,000 to be set free from prison while he was in good standing with the Syrian authorities. His uncle, who works in Kuwait, paid the Mukhabarat (secret police) $15,000 to release his seventeen-year-old son, who was jailed arbitrarily in Damascus. Furthermore, since the beginning of the civil war, a tremendous number of kidnappings have occurred in Syria, with the principal targets being men of military age, sons of wealthy families, and those with families abroad.

The Syrians who return to their former homes often do so with horror stories. The testimony of a refugee from Aleppo who visited his house in April 2017 carried a particular eloquence, while appearing to represent a broader reality: "I went back to our apartment in Ashrafiya [a neighborhood in northeast Aleppo]. From the Lebanese border to Aleppo, I had to pay a $100 bribe [two months' salary for a civil servant]. I had packed a food bag for my sister: tea, coffee, powdered milk, and so on. But once I arrived at Aleppo, my suitcase was empty because at every checkpoint on the road they took something. Our apartment could be rehabilitated with some work, but it is too expensive and there is almost no electricity. Our shop was destroyed and looted. We prefer to stay in Lebanon and wait for a visa to leave for Europe or Canada."

The family just mentioned is relatively well established in Lebanon: all are supported by the UNHCR (with $27 of food per person per month and healthcare coverage), the husband has a permanent job, and all four children are enrolled in school. Back in Syria, the economic situation, corruption, and rampant insecurity all deter a return, especially since doing so would forfeit their status as refugees and consequently the possibility of emigrating elsewhere. Even if only a few hundred visas are distributed a year by the European Union, Canada, Australia, and the United States, such slim opportunities still nourish dreams for a future departure. Further arousing desires for emigration are the millions of new Syrian refugees since 2012 living in northern countries (mostly Germany, Sweden, and Canada) who share their experience with their relatives. Moreover, the EU border is not protected by a wall, people are sometimes rescued at sea, and the right to family reunification has not been removed from the European Treaty of Accession 2003.

In Lebanon, the UNHCR's humanitarian aid and support from numerous NGOs allow Syrian refugees to extend their stay. Food and healthcare are largely covered, as noted in the example before, with the main expense being rent. The Syrians agree to work for a lower net wage than that of the Lebanese and, unlike the Lebanese, they do not report their earnings to social security. In northern and eastern Lebanon, where the refugees are concentrated, the World Bank is financing the construction of rural roads in order to create jobs for the refugees while also investing in the host community. The situation for Syrian refugees is far from pleasant, but for most it exceeds the alternative in Syria. For the international community, the dilemma remains wherein provision of aid alleviates suffering but, in doing so, potentially sends misleading signals to the refugees regarding their future.

The latest UNHCR poll shows that only 6 percent of Syrian refugees want to return to Syria in the near future and 8 percent say they will never return. Some three-quarters are officially hesitant. 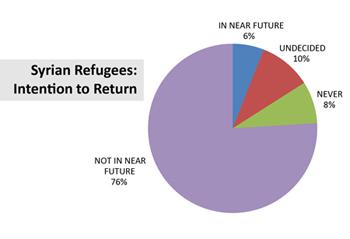 The way in which these sentiments develop will, no doubt, depend on security conditions and the speed of reconstruction in Syria. However -- as a general rule -- the more time refugees spend abroad, the less likely they are to return to their countries of origin. Yet should conditions deteriorate dramatically in their host country -- Lebanon, in this example -- Syrian refugees would be persuaded to return home regardless of any improvement in the security and economic situation. The deterioration of living and security conditions in Lebanon could also lead to the radicalization of people who cannot return to Syria and who, somewhere along the way, succumb to desperation.