Growing Risk of International Confrontation in the Syrian Desert

Various players have been rushing to secure their spot in former Islamic State strongholds that will be strategically important to the next phase of the war.

The May 18 U.S. airstrike on pro-regime forces heading for Syria's southern al-Tanf border crossing marks a turning point in the war. The situation on the Iraq-Jordan-Syria frontier now poses the threat of direct confrontation between American and Syrian forces, and perhaps other actors as well.

Al-Tanf has been occupied by U.S. Special Forces and American-backed rebels since March 2016. Following last week's strike, Defense Secretary Jim Mattis quickly noted that the United States does not seek to increase its role in the war, though it would defend its troops if they are threatened. Meanwhile, Bashar al-Assad and his allies believe that Washington wants to establish a more permanent presence in eastern Syria in order to strengthen its local allies, put pressure on Damascus, and prevent the regime from returning to the Euphrates Valley. This concern reflects the broader regional contest that the war has become, with the regime and its allies racing to establish an east-west "Shiite axis" from Iran to Lebanon and the United States seemingly looking to cement a north-south "Sunni axis" from the Gulf states and Jordan to Turkey. The situation in Syria's central and southern desert region (the Badia) will play an important role in shaping these dynamics. 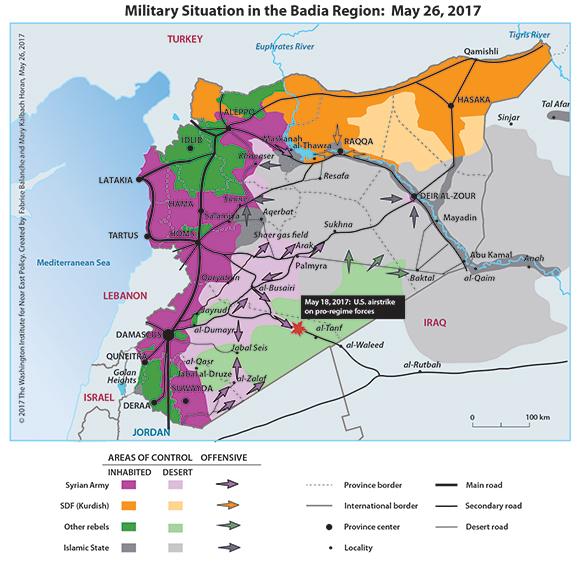 A LOW REGIME PRIORITY UNTIL NOW

Since 2011, Syrian army control over the Badia has gradually been whittled down to a few key communication routes and hydrocarbon resources. The Shaer gas field is particularly valuable for electricity production, so the regime entrusted it to the Desert Hawks (Suqur al-Sahara) militia founded by Ayman Jaber, an Alawite businessman close to Assad. This group has 7,000 men, mainly Alawites recruited from the coast.

Apart from Shaer, regime forces were expelled from most of the Badia after suffering a major defeat in Palmyra in May 2015. They hastily built an 800-kilometer north-south line of protection from Aleppo to Jabal al-Druze to prevent Islamic State (IS) offensives against Homs, Hama, or Damascus. Although Palmyra itself has switched hands more than once since then, much of the desert region remains out of Assad's hands.

IS has a considerable advantage in the portions of the Badia it still controls. Its fighters are organized in small, mobile groups that are effective at storming isolated garrisons. In theory, the Syrian army could use the same technique to counter them. For years, the Arab tribes of the Badia, especially in the south, were mostly hostile to the regime, which limited local recruitment and forced Assad to call on coastal Alawites instead. But IS atrocities have gradually brought dissatisfied tribes back into the regime's fold, including the Sheitat of Deir al-Zour, a thousand of whom were massacred by IS forces in August 2014.

Even so, retaking the Badia was not a priority for the regime prior to the past few months. Up until 2015, the army was necessarily focused on protecting the large cities and the Damascus-Homs-Aleppo axis that formed the backbone of its communication system. Yet the Russian intervention in September of that year saved and strengthened the regime's center, and Assad's forces have increasingly turned their attention back to peripheral areas. Retaking and holding Palmyra was the first step in the strategy to reenter the Badia, since the city is the main base for any regime operations in central Syria.

REBELS BREAK INTO THE BADIA

In March 2016, hundreds of rebel fighters crossed the border from Jordan with the support of the international coalition and seized al-Tanf. This was followed by the reconquest of Iraq's al-Walid crossing in August 2016 (which had been overrun by IS the previous year) and the reopening of the road from Baghdad to Amman. From al-Tanf, the rebels have sought to link up with the group Aliwya Ahmed al-Abdou (2,500 fighters) in the East Ghouta countryside of Damascus. The nearby towns of al-Dumayr and Jayrud are under rebel control but separated from East Ghouta by a wide ring of regime forces; the two sides continue to maintain a ceasefire for now. In the meantime, the rebels trapped in East Ghouta still have some access to the outside world via tunnels. For instance, local rebel leader Zahran Alloush used one of these passages to attend the Syrian opposition meeting in Saudi Arabia last December.

Rebels in al-Tanf have also sought to gain a foothold in the Euphrates Valley to the east, since most of them hail from that area. Syrian army deserters compose the inner core of the main al-Tanf rebel group, the Lions of the East Army (Jaish Usud al-Sharqiya); they have been joined by fighters expelled from the Euphrates Valley during IS offensives in 2014. On June 29, 2016, an audacious U.S. airborne operation was launched from al-Tanf with the goal of seizing Abu Kamal and provoking an anti-IS tribal uprising in the valley, but it failed and the survivors fell back. Since then, their role has largely been limited to controlling the border between al-Tanf and Jabal al-Druze to prevent IS infiltration of Jordan. As IS weakens, however, they have taken advantage by extending their control further into the Badia.

Al-Tanf rebels have become a threat to Damascus, advancing a few tens of kilometers from rebel areas that the regime took several years to encircle. They are also poised to hinder the regime's return to the Euphrates Valley. The Lions of the East Army is rapidly advancing north and east and may soon take Sukhna, an important oasis near Palmyra, as well as Baktal, the oil pipeline crossroads near Abu Kamal. Officially, the goal of these offensives is to seize IS territory and support the Euphrates tribes against the group. If successful, however, the rebels would essentially block the ongoing Syrian army offensive toward Deir al-Zour.

The regime is worried about this southern rebel expansion. The victory in Aleppo, the surrenders around Damascus, and the western ceasefire brokered in Astana freed thousands of regime troops to work on regaining control of the east. Since this spring, the Desert Hawks, integrated into the 5th Corps, have been participating in a large offensive in the Badia. They are joined by the al-Quds Brigade (a Palestinian militia from Aleppo), various Iraqi Shiite militias, and Hezbollah.

After pro-regime forces were turned away from al-Tanf by the recent U.S. strike, the army refocused on attacking the rebels from three different bases: Damascus, Palmyra, and Jabal al-Druze. In the latter case, army units are advancing rapidly along the Jordanian border to encircle one pocket of rebels, attempting to cut them off around Jabal Seis. Throughout this offensive, the regime has systematically reoccupied the network of forts located on the strategic border road. The departure of IS makes it less dangerous for Assad to put small garrisons back in place there, since the rebels do not have the same offensive capacity as IS. Iran can provide a few thousand Afghan Shiite Hazara fighters for this task; given their low motivation for heavy combat, they are well-suited to manning the forts.

Meanwhile, the army has encircled the eastern Qalamoun area between Palmyra and Damascus in order to force both IS and rebel fighters to flee. Al-Busairi, the crossroads for two major routes -- Palmyra to Damascus and al-Qaryatain to al-Tanf -- was the main target of this campaign, falling to the regime on May 25. Overall, the army's effort to reoccupy the crossroads, key water points (e.g., the reservoir at al-Zalaf), and the Jordanian border reflects a desire to cement its presence in the Badia and neutralize the offensive capacity of rebels at al-Tanf.

A RISK OF DIRECT U.S.-RUSSIAN CONFRONTATION

Syria's southern border has become a major flashpoint -- from al-Tanf to Sinjar, Iraq, the area is now being contested by various belligerents on behalf of their regional sponsors. The post-IS battlefield is being prepared, and the formerly "useless" eastern part of Syria is taking on much greater strategic importance in the competition between the east-west "Shiite axis" and north-south "Sunni axis." It is through this lens that one should view the regime's recent offensive between Palmyra and the Jordanian border.

Going forward, an international agreement on how to occupy former IS territory is growing more urgent by the day. Without such understandings, the parties run the risk of direct confrontation between Russian and American forces. For instance, how would Washington respond if U.S.-backed rebels were bombed by Russian aviation? And how might Moscow and Damascus react if Syrian army forces or their militia allies are struck in the Badia again? At a time when the Russian ground presence in Syria is reportedly growing and multiple factions are rushing to seize former IS territory in the desert, the potential for missteps is high, and the resultant diplomatic and military fallout could be dangerous.