The mixed Kurdish-Arab zone could buckle under any number of security, health, and economic threats, especially if the United States surrenders to Russian and Turkish interests by withdrawing its remaining forces.

Since the Turkish offensive of October 2019, the Autonomous Administration of North and East Syria (AANES) has found itself in a precarious position. Potential new attacks by the Turkish army are the main sword of Damocles hanging over its head. Yet the AANES and its main local authorities—the Kurdish-led Syrian Democratic Forces (SDF)—also face numerous other threats to their autonomy, including weighty humanitarian issues, a resurgent Islamic State, and repeated Syrian regime demands that they return to the fold unconditionally. Although Bashar al-Assad and his allies in Moscow lack the means or desire to open a military confrontation with the SDF, they are readily playing on local weaknesses accentuated by the Turkish offensive and the partial withdrawal of U.S. troops, which they hope to see completed in the coming months.

The Turkish offensive seriously injured the SDF because the umbrella group’s Kurdish units were left to weather the battle on their own—Arab SDF units largely abstained from the fighting because they do not consider themselves part of the dispute with Ankara. Based on the author’s trips to the region and conversations with local officials, however, none of the Arab militias appear to be defecting from the SDF, despite the regime’s urgent calls for Arab tribes to join the Syrian army. As long as U.S. troops are present in the east and fighters’ wages are paid, the SDF has a good chance of remaining united and controlling most of the territory in question.

Yet the presence of Syrian and Russian forces complicates the picture. Their troops occupy some bases inside the AANES as well as all boundary areas with the Turkish army. Russia’s positioning is likely intended as much to temporarily delay a new Turkish offensive as to control the strategic axes of the AANES. In any case, SDF units and local civilians can no longer freely use the section of the M4 highway between Ain Issa and Tal Tamer. The road was closed from October 2019 to this May, and traffic is now limited to convoys with Russian military escort. To reach Raqqa or Kobane from Qamishli, other travelers must therefore take a much longer and more dangerous route that is regularly threatened by Islamic State raids. Russian and Syrian troops could easily cut this narrow alternative road if they wanted to separate the western part of the AANES from the Kurdish stronghold of Qamishli-Hasaka. 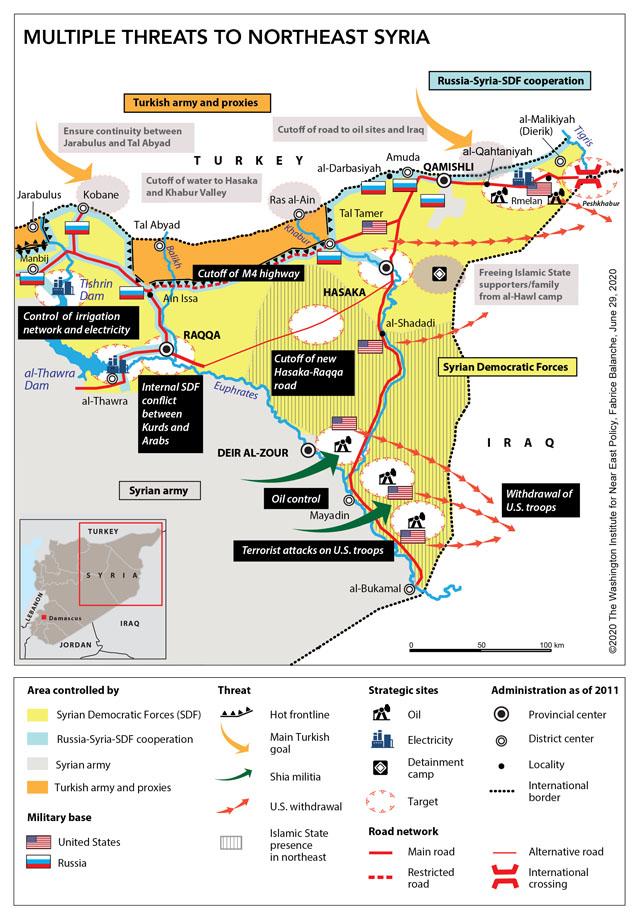 Some American troops have remained in Rmelan, al-Shadadi, and the oil fields southeast of Deir al-Zour. They patrol roads in these areas intensively, preventing Russian and Syrian forces from using routes outside their immediate area of influence. The strategic crossroads between the M4 highway and the Amuda-Hasaka road is strongly under U.S. control—Russian troops are not allowed to use it to reach their bases in Amuda and Qamishli. The road between Rmelan and the Peshkhabur crossing with Iraq is likewise forbidden to Russian and Syrian forces, which regularly provoke incidents with U.S. patrols. Moscow wants to control this crossing because it is the only breach in the encirclement belt that Turkey, Russia, Iran, and Assad have built around the AANES. Indeed, with Ankara’s cooperation, the Kremlin appears to be pursuing a strategy of progressive control through strategic points and economic asphyxiation.

Before the civil war, the Baath regime had long pushed the region currently controlled by the AANES to specialize in the production of raw materials such as wheat, cotton, and oil, which were then processed in west Syria. This had the advantage of keeping the region dependent on Damascus and limiting autonomist tendencies, whether among the Kurds or Arab tribes.

These arrangements pose a serious challenge to the zone’s autonomy today, since it is still heavily dependent on imports in the agricultural field and other sectors (e.g., the AANES does not produce its own fertilizers or pesticides for export crops). Yields have been plummeting since 2011, greatly decreasing farmers’ income. Widespread fires in 2019 also discouraged many locals from cultivating their fields. 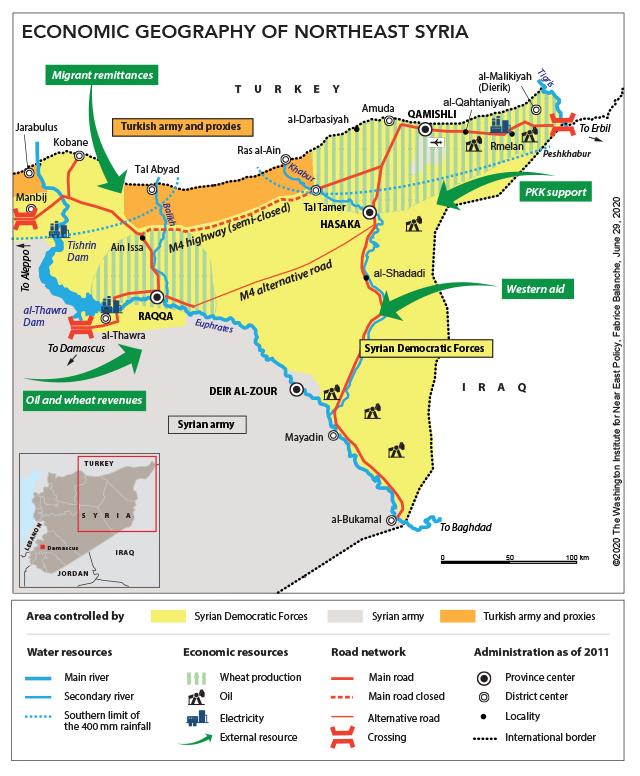 Above all, farmers in the AANES lack sufficient water due to the destruction of the large Euphrates River irrigation systems during the war against the Islamic State. Rehabilitating these systems will be slow and costly, requiring substantial help from Western NGOs whose work is currently handicapped because of security risks.

In addition, Turkey has been using water as a weapon against the AANES, reducing the flow of the Euphrates and tapping into groundwater around the border, thereby reducing the amounts available downstream. With the capture of Ras al-Ain, Turkish forces now control the main source of drinking water in Hasaka province, the Aluk pumping station, where supplies are sent to the provincial capital via Tal Tamer and other localities. Voluntary cuts are increasing despite Russian mediation, and it is very difficult to find new sources of water for Hasaka’s large population, which swelled to 450,000 after new refugees arrived from Tal Abyad and Ras al-Ain. The local groundwater is salty, and the construction of a pipe from al-Malikiyah, a more favorable source, would be long and expensive. Another costly solution is to extend al-Suwar canal further north than al-Shadadi, but Kurdish authorities are afraid to be dependent on “Arab water.”

For now, the water shortage is exasperating the population and creating additional tensions between Arabs and Kurds. Arab tribes in the southern part of Hasaka province have accused AANES authorities of hoarding local water supplies for Kurdish communities to the north, reviving rumors of ethnic cleansing.

In all, around three million inhabitants live under SDF control, including the Shahba enclave north of Aleppo and the Sheikh Maqsoud neighborhood in Aleppo. The majority of these people are in great need of humanitarian help, especially the estimated 700,000 internally displaced persons. Kurds expelled from Afrin, Tal Abyad, and Ras al-Ain during the Turkish offensives of winter 2018 and autumn 2019 have little hope of returning to those areas. According to the UN Office for the Coordination of Humanitarian Affairs, the latter offensive displaced 222,000 people, and all of the 117,000 who have since returned home were Arab.

This situation makes Western aid to the AANES even more essential. Yet Moscow has repeatedly tried to block this aid, both at the UN Security Council and through its actions on the ground. In December, it vetoed the council’s proposal to use al-Yarubiya in the northeast as a border crossing for UN supplies via Iraq. Aid can now only come through regime-controlled territory. The European Union and the United States have strongly supported deliveries by humanitarian NGOs to compensate for the resultant UN shortfall, but such groups have been hampered by Russian patrol activity along the Peshkhabur-Qamishli axis.

Meanwhile, Assad has tried to use the coronavirus pandemic to discredit the AANES, claiming that only the Syrian state can fight the disease. Due to UN inertia and Russian pressure, the World Health Organization still works primarily with the official Syrian government, so all of the main laboratories capable of testing COVID-19 patients are located in Damascus, Latakia, and Aleppo. The AANES refuses to send tests to these labs because it does not want the regime to spread potentially destabilizing disinformation about infection rates in the northeast. In mid-April, the Kurdistan Region of Iraq set up two laboratories in the AANES, but medical equipment remains scarce, forcing Syrian Kurdish authorities to close the Peshkhabur crossing throughout March-April and institute draconian restrictions on internal movement in order to prevent wider spread of the virus. These efforts were effective in terms of containing the pandemic, but they have impaired foreign aid and the fragile local economy.

THE NEED FOR WESTERN POLITICAL DETERMINATION

Russia’s apparent goal is to suffocate the AANES, force its dissolution, and convince the SDF to integrate into the Syrian army’s 5th Corps. For the time being, the presence of U.S. troops and substantial aid has defeated this strategy. Yet Moscow and its allies have not lost hope that the Trump administration will change the game by ordering further withdrawals. Russia is also counting on a new Turkish offensive against the Kurds, which might make the American presence untenable if it occurs in the vicinity of Rmelan. Since 2016, Moscow has regularly offered Turkey a piece of Syrian Kurdistan in exchange for standing aside while the Assad axis continues to retake the northwest part of the country. After the recent Syrian army advance in Idlib, Ankara may now have the Russian green light for a new offensive in the northeast.

As for last month’s dialogue between rival Syrian Kurdish political parties, the United States and Europe welcomed the diplomatic progress, since a united Kurdish front would strengthen the AANES. Realistically, however, this dialogue will not remove any of the above threats to the zone’s autonomy. What is required instead is Western political determination against Russia and Turkey’s strategies, supported by a sufficient military presence to dissuade external coup efforts and a Marshall Plan-style humanitarian and economic campaign to reduce internal tensions. The contrast between improvements in the AANES economy and financial deterioration within regime-held areas (e.g., because of new U.S. sanctions arising from the Caesar Syria Civilian Protection Act) could give a particularly potent boost to local authorities.

Fabrice Balanche is an associate professor at the University of Lyon 2 and an adjunct fellow with The Washington Institute.