Without a real military threat to the capital, neither the Syrian leader nor Iran will accept a political transition, even if Russia agrees to one.

The next round of Geneva peace negotiations for Syria is set to begin this month, but President Bashar al-Assad's recently tightened grip over Damascus already has the Syrian opposition in a tough spot. Indeed, focus on the battle of Aleppo, where regime forces have also advanced recently (see "Kurdish Forces Bolster Assad in Aleppo"), has distracted attention from the Syrian army's slow but sure recapture of the rebel-held outskirts of the Syrian capital.

Creating a Favorable Demographic Balance for the Regime

Since the 1970s, the Syrian army has had a considerable presence in the Damascus area, with large military bases occupying the south and west of the capital. Officially, this military posture has been intended to protect Damascus against Israel, given that the Golan front is some fifty kilometers away. The unofficial goal of this setup, designed by former president Hafiz al-Assad, was better control of Damascus. Bashar's father believed that whoever held Damascus held Syria. Part of the elder Assad's effort to control Damascus after seizing power in a coup in November 1970 was to station tens of thousands of troops, along with Alawite officials and their families, in the city. Whereas in 1947 only 300 Alawites lived in Damascus (out of about 500,000 metropolitan-area inhabitants), that figure had soared by 2010 to more than 500,000 (of about 5 million in the metro area), or a quarter of Syria's Alawite community. More Alawites thus lived in Damascus than in any other Syrian city. 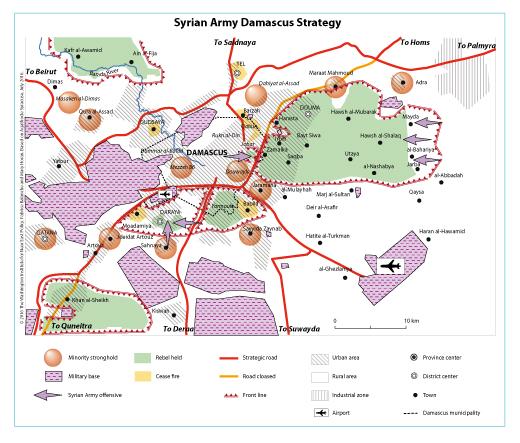 Beginning in the 1970s, the regime also sought to distribute Alawites strategically throughout the city. In this arrangement, regime officials still live in Malki, around Assad's private residence, while lower-ranking civil servants inhabit Mezzeh 86, a large area overlooking the wealthy neighborhoods of Mezzeh. Also attracting Alawites are the originally Druze-Christian suburban towns (e.g., Jdeidat Artouz, Jaramana, and Sahnaya), which offer a more sustainable lifestyle than the conservative Sunni areas of Ghouta (e.g., Douma, Daraya, Zamalka) -- which have become strongholds of the rebellion.

Since Hafiz al-Assad's rise, the Syrian regime likewise allowed Alawite, Druze, and Christian neighborhoods to expand close to the strategic axes linking Damascus to the rest of the country and Lebanon, while also interrupting the city's "Sunni crescent." This is the case in the large suburb of Jaramana, which beginning in the 1980s was developed along the road to Damascus International Airport, fitting the regime's strategic plan to separate the city's Sunni suburbs -- West and East Ghouta.

In the city's northeast, mostly non-Sunni officials and employees in industrial public-service jobs are housed in public units in Dahiyat al-Assad, Maarat Mahmoud, and Adra, loyalist neighborhoods helpful in supporting defense of the city's northeastern entrance. Thus, given that the direct route from Damascus to Homs has been under rebel fire since April 2012, traffic has been diverted to the northern ring road, from which it can reach the Damascus-Homs highway. In the city's southwest, densely situated military camps and Druze-Christian communities facilitate the protection of roads to Beirut, Quneitra, and Deraa. The Sunni localities of Moadamiya, Daraya, the Yarmouk Palestinian refugee camp -- which is officially a Damascus neighborhood -- and Babila are bordered to the south by the Druze-Christian belt, reinforced since the 1970s by increasing numbers of Alawites, and the southern ring road, which has become an important line of defense for Damascus against the rebel-controlled suburbs.

As a whole, the city is surrounded by a large ring road and cut by wide avenues that create breaks in the urban space. These streets, designed in the 1970s, were not meant to ease traffic flow, a point made especially clear when one considers that few Syrians then had private cars and that developers did not expect private car ownership to balloon. Rather, this was a classic example of security planning, with the road layout optimized for the deployment of armored vehicles to deter any major event. In the late 1970s, Damascus's Old City fell victim to this strategy when a portion of its souks was razed to make way for a shopping area with wide streets that intersected at right angles. The regime did not create wide avenues everywhere, though, allowing informal suburbs with narrow, mazelike streets to proliferate outside the city. These suburbs ultimately became the stronghold of the uprising.

The rebels' failure in Damascus can be attributed mainly to their inability to unite West and East Ghouta and cut off the road to the international airport. Jaramana was strongly defended by the Syrian army and, above all, by local Druze members of the pro-regime National Defense Army. The population has withstood the rebels' assaults, which have included car bombs and rocket attacks. Thus, from Jaramana the Syrian army has expanded its hold on the two sides of the airport road, encircling both Sunni parts of Ghouta. 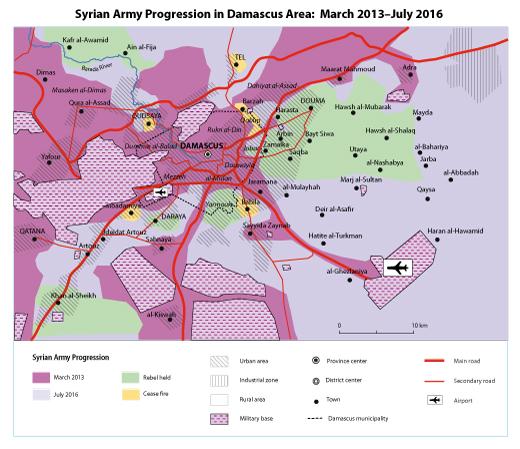 The military siege on the rebel areas around Damascus is being accompanied by a food embargo and airstrikes intended to scare civilians. The basic principle of counterinsurgency, to separate civilians from rebels, is being applied here primitively, as it has been in Aleppo. In Daraya, only 4,000 people remain, according to the United Nations, of an original 80,000 inhabitants in 2010. This siege is also meant to encourage other rebel localities to accept a modus vivendi with the regime. Babila, Moadamiya, Qudsaya, al-Qabun, and Barzah have thus concluded ceasefires with the Syrian army, preventing their destruction and the starvation of their populations.

Since spring 2016, the Syrian army has retaken one-third of East Ghouta, and its forces continue to advance from the east. This regime offensive was aided by conflict among the rebel groups Failaq al-Sham, the Fustat Army (led by Jabhat al-Nusra), and Jaish al-Islam. The last of these had been exercising nearly hegemonic control over East Ghouta since 2012, but the death of its founder, Zahran Alloush, on December 25, 2015, has weakened the militia. Alloush's death also represented a deep setback for Saudi Arabia, given that he had been promoted to coordinator of the Syrian opposition in the Geneva talks. For the first time, the political and military opposition had been united. Alloush's successor, his younger brother Mohammed Alloush, has not been up to the job, either locally or internationally, being quickly marginalized in Geneva in favor of Riyad Hijab, the former Syrian prime minister. 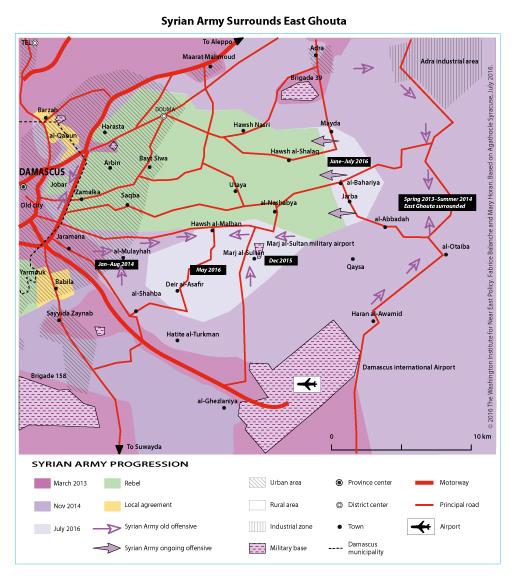 Since 2012, a Military Reversal

After the July 18, 2012, attack that claimed the lives of several regime officials, including Assef Shawkat, Bashar al-Assad's ambitious brother-in-law, the rebels seemed close to capturing Damascus. Four years later, the Damascus military situation has been completely reversed. The Syrian army and its allied Shiite militias now encircle the rebel areas around Damascus. Further, the rebels have lost hope of being rescued by outside intervention because the Amman-based Military Operations Center (MOC), which helps coordinate rebel actions, no longer prioritizes supporting an offensive against the Syrian regime but rather one against the Islamic State. The potential conclusion of a U.S.-Russia cooperation agreement against IS and Jahbat al-Nusra could accentuate the feeling of abandonment among rebels and consequently encourage many groups to negotiate with the regime or join the jihadists.

In Damascus, the regime is strongly supported by Hezbollah and Iran. This is largely because the Syrian capital and especially its airports are the main gateway for Iranian weapons to Hezbollah. The influx of Shiite fighters into Damascus is also part of an effort to defend the Sayyeda Zainab shrine, a major Shiite pilgrimage site that, before 2011, welcomed hundreds of thousands of visitors every year. Each time a rocket falls on Sayyeda Zainab or a car bomb explodes in the area, the news reverberates throughout the Shiite world, helping attract new fighters to the front. For Iran, Sayyeda Zainab cannot be allowed to meet the same fate as the Samarra mosque, destroyed in an al-Qaeda attack in February 2006.

As compared to government-controlled western Aleppo, which is being buffeted by rebel rocketfire, the Syrian capital is relatively calm. Public services are operating normally, and barring the sound of artillery from Jabal Qasioun pounding rebel areas, the war seems far away. The international airport is operating again, and the main roads to Homs, Deraa, and Beirut are safe. Such developments can only reassure Assad. Although he still does not control most of the country and his army can barely preserve the recent territorial gains facilitated by the Russian air force's intervention, Assad feels less threatened because he holds Damascus. And because he no longer needs Putin to defend the airspace over Damascus, he will be less likely to bow to Russian pressure, not to mention other international pressure, to cede power. What Assad does still need in Damascus is continued strong defensive military support from Iran, its proxy Hezbollah, and Iraq Shiite militias. As it stands, without a real military threat to Damascus, neither Assad nor Iran will accept a political transition in Syria, even if Russia agrees to one.