Between Not-In and All-In: U.S. Military Options in Syria

Chandler Atwood
Chandler P. Atwood, a major in the United States Air Force, was a visiting military fellow at The Washington Institute from 2013-2014.

Joshua Burgess
Col. Joshua C. Burgess was a visiting military fellow at The Washington Institute from 2013-2014.

In light of the inability of diplomacy and sanctions to staunch the Syrian bloodletting, the Obama administration is reviewing its policy alternatives in Syria. This paper, and the associated briefing, provides an overview of U.S. military options, evaluating the pros and cons of each. 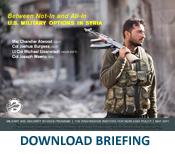 The Syrian war has left more than 150,000 dead and more than 9 million displaced. With diplomacy and sanctions having failed to achieve their objectives, the Obama administration is reportedly considering a more proactive role in the conflict. The impulse to refrain from military intervention remains understandable, but the costs of nonintervention may be even steeper: an al-Qaeda foothold and expanded Iranian influence in the Levant, a new generation of jihadists poised to migrate to other conflicts, social tensions and political instability in neighboring states, and growing doubts about U.S. credibility. Nor does military intervention necessarily imply boots on the ground. Many options entail lower levels of force, including strengthened sanctions and cyberoperations, force build-ups, or an enhanced effort to equip and train the moderate opposition. The window may have closed for seeking a positive outcome in Syria, but by acting wisely yet assertively, the United States may yet secure its interests.

Col Joshua Burgess (USAF) is a political affairs strategist with extensive special-operations and security-cooperation experience in Africa, Latin America, Europe, and Central Asia, and is a linguist in German, Spanish, French, and Dari.

Lt Col Michael Eisenstadt (USAR, ret.) is director of the Military and Security Studies program at The Washington Institute.

Col Joseph D. Wawro (USA) holds a master’s degree in national security and policymaking from the Naval War College and was deployed most recently to Iraq as part of Operation Iraqi Freedom and to Afghanistan in 2010.