Beginning of the End for East Aleppo

The Assad regime and Russia seem eager to establish full control of the city before the Trump administration takes office, essentially presenting the new president with a fait accompli on the war's most notorious front.

Over the past week, the Syrian army and its allies conducted a four-day campaign in which they captured more than 40 percent of the rebel-controlled eastern districts of Aleppo city. This is a major victory that marks the beginning of the end for the rebels there.

The opposition-held portion of East ​​Aleppo has been surrounded since July, when Assad regime forces cut off Castello Road, the local rebels' main supply route. The jihadist coalition Jabhat Fatah al-Sham (an al-Qaeda affiliate formerly known as Jabhat al-Nusra) breached the encirclement in August by opening a corridor through the city's southeastern district of Ramouseh, but they were unable to reverse wider battlefield trends in the area. 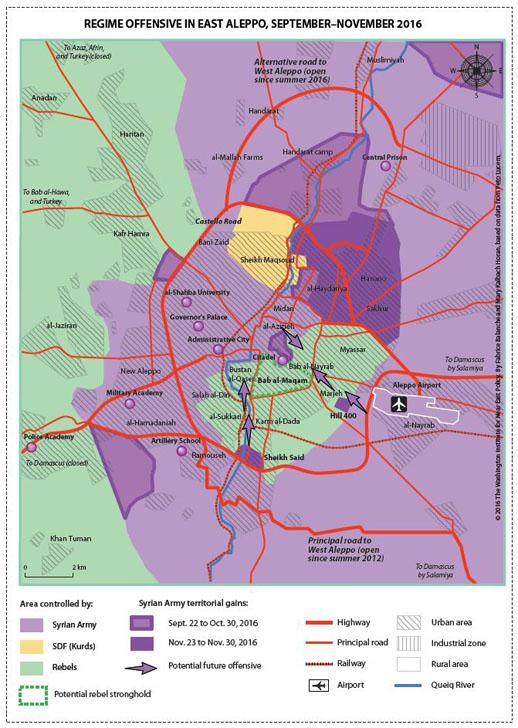 The regime closed the gap by September 21, at which point the army and its allies began another assault from Handarat, a former Palestinian refugee camp north of the city. This area is not very densely settled and thus offered little resistance to the army's progress; after one month of fighting (September 22 to October 30), Bashar al-Assad's forces had retaken ten square kilometers of territory. Some gains were made elsewhere around Aleppo, but they were limited and served mainly as a diversion. On November 1, the regime began a three-week artillery bombardment in preparation for the latest ground advance. Afterward, Assad's troops recaptured Hanano district, seizing about 15 square kilometers total. In two months of fighting, half of rebel-held Aleppo was lost.

Regime forces fought their way into East Aleppo with support from the Russian air force and, more– important, an intense artillery barrage that overwhelmed rebel defense lines. Assad now seems to have a sufficient number of ground forces in the area to launch assaults in urban districts where the army had previously eschewed offensives for lack of troops. Although there is no reliable estimate of regime forces in Aleppo, opposition sources cited in an August 30 Daily Mail article claimed that Iran has overseen the deployment of up to 60,000 Shiite militiamen to Syria. Whatever their true numbers, many fighters have no doubt made their way to Aleppo and furthered Assad's campaign there.

For their part, the number of rebels in Aleppo is estimated at only 10,000, according to a November 29 report in Le Figaro. Jabhat Fatah al-Sham has 1,500-2,000 men, and Ahrar al-Sham, its main partner in the Jaish al-Fatah coalition, has around 2,000. The remaining 6,000 are from the Fatah Halab coalition, which is linked to the Free Syrian Army but has proven incapable of coordinating operations among its members.

Jabhat Fatah al-Sham reinforced its presence in Aleppo this spring, allowing it to dominate Fatah Halab and prevent any rebel surrender. The former group's desire for hegemony led to fighting with other rebels in recent weeks, especially in the north, facilitating the regime's progress. From a military point of view, it likely would have been impossible for the encircled rebels to hold their frontline perimeter anyway, since it extended more than fifty kilometers and was under attack from all directions.

The next regime offensive in Aleppo, which reportedly began today, will try to further divide the rebel zone. After capturing Hill 400, a strategic point west of the airport, Assad's forces began advancing toward Aleppo Citadel from the east. If they succeed there, the district of Myassar will be isolated and would likely fall easily. Meanwhile, a northward offensive has been launched from the Sheikh Said district, likely with the aim of isolating Salah al-Din district.

In response, the rebels are retreating to neighborhoods in the old city south of the citadel, which are more easily defensible. The area's dense network of buildings, small streets, and tunnels make it a veritable anthill that will be more difficult for the army to retake than other districts.

After the current offensive, the regime's next steps are uncertain. The army may hope to wait until hunger pushes the local rebels to negotiate a withdrawal toward Idlib province, as happened recently with encircled rebels in Daraya. This could take months, however, and Assad may not be willing to wait that long. He and his allies in Moscow seem eager to establish full control of Aleppo before the Trump administration takes office, essentially presenting the new president with a fait accompli on the war's most notorious front.

Brief Analysis
Militia Propaganda Around the Attack on al-Tanf
Oct 22, 2021
◆