Washington's Militia Problem in Syria Is an Iran Problem

While Assad may nominally hold reclaimed areas in the south, he will never truly control them so long as Tehran tells its militia proxies to secure that corridor for its own purposes.

Click on the graphic to reference an annotated Google Map compiled by the author. 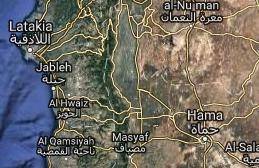 For the majority of Syria's war, militias have formed an important part of Bashar al-Assad's forces. Yet while Syrian nationalist militias roughly follow the regime's priorities by fighting to protect core population centers like Damascus, Aleppo, and Hama, Iranian-backed militias tend to focus on Tehran's interests—mainly its effort to build a land bridge between Iran and Lebanon. Additionally, Iranian militias in the south are keeping the territory they conquer instead of handing it over to the regime. If Assad is still in power by war's end, he will be beholden to Iran because of his army's frequent inability to secure territory on its own. In fact, barring an unexpected shift in U.S. policy, Syria may be on the way to becoming like Lebanon under Emile Lahoud: perpetually beholden to a greater power.

Using militias became a necessity for Assad when his army shrank to a fraction of its former size within the first two years of the war. In 2013, Lebanese Hezbollah publicly acknowledged its role in fighting for the regime, while the presence of Iran's Islamic Revolutionary Guard Corps (IRGC) has grown from an estimated 700 personnel to around 3,000 since the Russian intervention began in September 2015. Hezbollah and other militias have borne the brunt of conquering territory for at least the past five years, with Syrian militias mainly taking the north and west while Iranian-backed brigades focus on the south (though Hezbollah and certain other foreign factions have joined major battles in the north when needed to preserve the regime, including in Aleppo).

The Syrian militias that answer to Assad include "Qalamoun Shield" and "Shield of the Homeland." Most of their campaigns have focused on Aleppo, Idlib, the Damascus countryside, and smaller operations such as the battle for al-Qaryatain.

As for the militias that are supplied, funded, and commanded by Iran, they include Hezbollah, Liwa Fatemiyoun, Liwa Zainabiyoun, and elements from the Iraqi Popular Mobilization Forces (PMF) such as the Imam Ali Brigade. The IRGC also has a significant presence, not so much as frontline combatants but rather as a command structure and connective tissue for Tehran's allies in Syria, including militias made up of locals (e.g., Liwa al-Imam al-Hussein, which took part in the recent Beit Jinn offensive).

Some militias occupy a middle ground—for instance, the National Defense Forces are under the Assad regime's command and follow its interests, but they are subject to significant Iranian influence as well. The NDF are currently fighting rebel forces in the opposition stronghold of Harasta northeast of Damascus.

The total number of Iranian-backed forces is difficult to estimate, and information on them is released only intermittently. In September 2017, the Times of Israel cited a Hezbollah commander claiming that the group had 10,000 fighters in southern Syria. And on January 17, 2018, an Iranian official noted that 2,000 Liwa Fatemiyoun fighters had died and 8,000 more had been injured since their arrival in Syria; other estimates place the total deaths around 865. Of course, there are political incentives for either exaggerating or downplaying casualty numbers. For example, Lebanese audiences do not like to hear that large numbers of Hezbollah soldiers are dying for an Iranian cause, even when their communities are normally sympathetic to that cause. In contrast, Iran may have reason to play up the death toll among Liwa Fatemiyoun and Zainabiyoun, perhaps assuming that it will mobilize the Afghan and Pakistani communities from which they draw their fighters (see more on this issue below).

Regarding motives, pro-Assad militias have obvious political and economic incentives to fight, as Syria is their homeland. Iranian-backed forces have more diverse motivations, concentrating on three primary objectives: (1) protecting Sayyeda Zainab, the prominent Shia shrine near Damascus, and fighting the Sunni jihadist threat before it reaches Iran; (2) keeping Assad in power as a useful but dependent client; and (3) establishing a land route across Iraq, Syria, and Lebanon in order to cultivate strategic depth and create multiple supply lines for dependent militias.

To this end, the forces under Iran's command are not particularly interested in Assad's declared goal of conquering "every inch of Syria." Liwa Fatemiyoun is motivated by a mix of ideology and carrot/stick incentives; for example, some Afghan residents of Iran can obtain full citizenship if they promise to sign up for the brigade, while others are forced to join through conscription. And while Hezbollah, the IRGC, and other Iranian forces can still be found throughout areas not immediately important to the land bridge, their efforts tend to serve the first objective of keeping Assad in power. During the December offensive in Beit Jinn, for instance, Iran's militias were present but did not focus on eliminating opposition fighters; instead, a deal was struck allowing the rebels to transfer to their last remaining northern stronghold in Idlib. Hezbollah took part in the assault as well but did not put troops on the frontline for fear of sacrificing too many for nonessential territory.

Indeed, one of the most glaring signs that Iranian-backed militias are uninterested in continuing the fight against rebel collectives like the Free Syrian Army and Hayat Tahrir al-Sham is the fact that they are increasingly withholding their forces from the frontlines. Once the regime launched its campaigns to retake the Euphrates towns of Abu Kamal and Deir al-Zour last October, few of Iran's proxies were seen around Idlib, Aleppo, Hama, or Quneitra; instead, they seemed to concentrate on actions along the M20 highway connecting Palmyra and Deir al-Zour, and along desert roads leading to the T2 pumping station.

Moreover, once the Euphrates campaigns wound down, death announcements for Hezbollah, IRGC, and Fatemiyoun fighters slowed to a trickle. Ali Alfoneh, an Atlantic Council researcher who monitors such announcements, pointed out the large reduction late last month, tweeting that only seven Hezbollah fighters had been killed in January (in comparison, his total estimate from September 2012 to mid-January 2018 was 1,214). Such numbers indicate that while militias are still willing to assist the Syrian army where necessary, they are mostly content to secure their recently conquered territories and cement Iran's land bridge through southern Syria rather than return to major operations and frontline battles in rebel strongholds such as Idlib. In a telling acknowledgment of this shift, a video released after the frontier town of Abu Kamal was retaken shows Qassem Soleimani, commander of the IRGC's Qods Force, stepping across the Iraq-Syria border and symbolically uniting the Shia communities of both countries.

This explains how Tehran's priorities could be aligned with Assad's during the Euphrates campaigns, but less so since those offensives ended. For example, in the December-January battle for the northwestern town of Abu Duhur, Iranian-backed militias served mainly as support troops instead of frontline fighters. They occasionally intervened when a Syrian army advance stalled, as seen in the northeast portion of the Abu Duhur campaign and in al-Fua. Likewise, analyst Aymenn Jawad al-Tamimi noted last month that there was little evidence to indicate major Hezbollah battlefield participation in the December fight for Beit Jinn, apart from a single death announcement regarding an alleged commander. Even so, the town could become more important to Iran down the road as a potential base for harassing Israeli troops in the Golan Heights.

Meanwhile, now that the fighting in the southeast has decreased significantly, scraps of information have emerged indicating that Iranian-backed militias may be trying to embed themselves there. Various videos and photos show soldiers in Abu Kamal holding Iranian and Iraqi PMF flags alongside Syrian and Hezbollah flags. Yet the best evidence of Tehran's intentions in the southeast is the number of public appearances that Iranian and militia personnel made during the Euphrates offensives. From September to December, militias issued or appeared in multiple photos, videos, media statements, and death announcements, with the latter serving as a major source of information on their whereabouts. Similarly, brazen displays of Iran's support for its militia network and Assad appeared on social media and news broadcasts.

The Trump administration has made two high-profile announcements about Syria in the past month. On January 17, Secretary of State Rex Tillerson said that diminishing Iranian influence and denying Tehran's "dreams of a northern arch" were among Washington's five integral goals in the war, and that the 2,000 U.S. troops already deployed in Syria would remain there in order to further that goal. One week later, Defense Secretary James Mattis released a National Defense Strategy document that made only one reference to Syria, but correctly treated the issue as an Iranian problem, noting, "Inter-state strategic competition, not terrorism, is now the primary concern in U.S. national security." The document did not mention militias in Syria, and the administration's overall response to that problem has been tepid at best. By reorienting U.S. defense strategy toward major power competition involving China, Russia, and the Iranian nuclear program, the administration implied that it will not prioritize a given entity unless it poses a direct threat to the homeland.

Going forward, America faces the same set of real but limited interests in Syria. The downsides of direct military action seem to outweigh the potential benefits, and many significant U.S. diplomatic posts in the region remain vacant. The administration has committed to keeping troops in Syria, but if their resources and numbers remain the same, they are unlikely to change the course of the war.

Even so, U.S. officials should realize that just because a given militia seems to act in Assad's interests, this does not necessarily mean it is beholden to the regime indefinitely. Most of the militias inside Syria have additional benefactors besides Damascus and will align their actions accordingly. Most important, Iranian-backed forces will follow Tehran's emphasis on securing a corridor to the Mediterranean Sea. Therefore, while Assad may nominally hold the reclaimed territory in the southeast and southwest, he will never truly control it so long as Iran's interests require those lands.

Jackson Doering is a former research assistant at The Washington Institute. 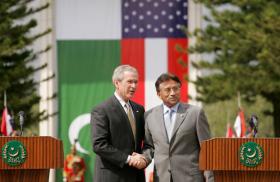 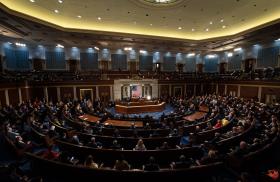 Brief Analysis
The State of the Union and the Middle East
Feb 8, 2023
◆

Brief Analysis
The Fractured Opposition to the Islamic Regime
Feb 7, 2023
◆