The Twitter Purge and Digital Diplomacy in the Middle East

The company’s crackdown on fake accounts caused a stir in some regional countries, but the expanding use of encrypted messaging platforms may say more about the people’s sentiment toward their leaders.

When Twitter purged millions of fake accounts on July 13, Saudi Arabia seized on the incident as an opportunity to embarrass its rival Qatar. The Saudi newspaper Okaz falsely claimed that Emir Tamim bin Hamad al-Thani had lost 2.4 million followers, portraying it as further proof that the Qatari people were losing confidence in their leaders. In truth, the emir lost fewer than a thousand followers, and his total following never exceeded 250,000. Besides serving as another petty salvo in the ongoing Gulf Cooperation Council dispute, the claims highlighted the increasingly public and political role that social media plays in regional affairs.

Twitter decided to delete tens of millions of fake accounts amid growing concern about prominent individuals buying fake accounts to inflate their followings. The move came after a New York Times investigation found that a U.S.-based company, Devumi, had sold over 200 million fake accounts to thousands of prominent politicians, celebrities, authors, and other public figures around the world. Twitter expects the purge to eliminate 6% of all accounts on the platform.

THE PURGE’S IMPACT IN THE MIDDLE EAST

Twitter is an increasingly favored form of official communication in the Middle East. A 2018 study conducted by the public relations company Burson Cohn & Wolfe ranked King Salman of Saudi Arabia as the most influential global political figure on Twitter—although he uses the service infrequently, each of his posts over the past year was retweeted more than 150,000 times on average. King Abdullah of Jordan has also made Twitter a key communication method, ranking fourteenth among global leaders in the same metric. And the foreign ministers of the United Arab Emirates and Saudi Arabia are the second and third most-followed foreign ministers in the world.

Given Twitter’s prominent role in regional politics, the purge’s effects were notable. Most Middle East leaders lost about 0.5 to 2% of their followers, similar to what happened with other world leaders (President Trump lost 0.6% of his followers, former president Barack Obama 2.3%, and President Vladimir Putin 2.1%). Egyptian president Abdul Fattah al-Sisi lost only 0.4%, the lowest among regional heads of state, while King Abdullah lost some 13.5%. 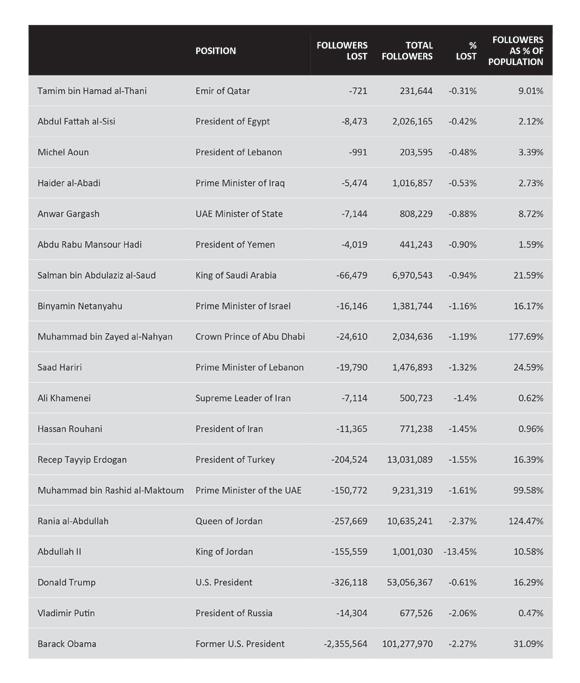 Interestingly, Emir Tamim lost 721 followers on July 12, then gained 3,528 immediately after the next day’s Twitter purge. Since then, the Qatari leader has been gaining followers much more quickly. In the previous month, he gained an average of 360 followers per day, but that figure has now mushroomed to around 2,500. Meanwhile, his ambassador to the United States, Meshal Hamad al-Thani, lost some 60% of his following.

The impact of these shifts was highly publicized in Qatar’s case because the country’s citizens have very high Internet access and usage rates. A 2017 study by Northwestern University in Qatar found that Internet and smartphone penetration among Qatari nationals stands at nearly 100%, and they are estimated to spend an average of forty-five hours per week online, compared to twenty-seven hours for nationals in other regional states (though it should be noted that the validity of this data is difficult to ascertain because no methodological info could be found).

While not all Middle East countries have such ubiquitous online access, Internet penetration in the region is growing rapidly. As early as 2019, Cisco anticipates that the Middle East and North Africa will lead the world in cloud traffic growth. This will only increase the visibility of social media shakeups in a region where the press has shown interest in the online followings of political leaders. After the Twitter purge, Asharq al-Awsat reported on which world leaders were the first to join the platform and which had the largest followings. The article also described Twitter “mentions” as a method of measuring diplomatic rapprochement between countries (e.g., whether or not Arab leaders congratulate each other on holidays and achievements or send condolences for disasters).

TRENDS IN REGIONAL SOCIAL MEDIA USE

The purge took place in the context of significant shifts in social media patterns across the Middle East. Internet users appear to be moving away from platforms like Twitter, seemingly preferring encrypted group-messaging services. The previously mentioned survey by Northwestern University in Qatar found that regional Twitter use has fallen dramatically in recent years. In 2014, 48% of Internet users in the six countries covered (Egypt, Lebanon, Qatar, Saudi Arabia, Tunisia, and the UAE) were on Twitter, but just three years later that figure had fallen below 30%. Hence, Twitter purges may become less relevant to local citizens over time.

The purge also demonstrated that buying an inflated Internet presence through fake follower accounts can make it more difficult to ascertain the true popularity of regional leaders. Although Twitter has seemingly cleaned up its service for now, similar methods of artificial inflation are sure to arise. Researchers should therefore regard social media statistics on political leaders with skepticism, recognizing that online popularity may mask popular dissent.

On that note, as smartphone penetration in the Middle East increases, encrypted messaging platforms such as WhatsApp may help people circumvent autocratic restrictions on their freedom of assembly. WhatsApp group chats played a significant role in the recent mass demonstrations across Iran, showing why social media trends carry important implications for regional leaders.

Samuel Northrup is a research assistant at The Washington Institute.