Turkey and the KRG: An Undeclared Economic Commonwealth

Soner Cagaptay
Soner Cagaptay is the Beyer Family fellow and director of the Turkish Research Program at The Washington Institute.
Christina Bache Fidan
Christina Bache Fidan is a research fellow at the Center for International and European Studies of Kadir Has University in Istanbul and a PhD candidate in the department of politics and international studies at the University of Warwick.
Ege Cansu Sacikara
Ege Cansu Sacikara is the Yvonne Silverman Research Assistant at The Washington Institute.
Brief Analysis

For the long-term benefit of both, Ankara and Erbil share a strong interest in maintaining their partnership.

In 2007, at the nadir of Turkish-Kurdish ties, the Kurdistan Regional Government (KRG) of Iraq made a strategic decision to pivot to Turkey. The Iraqi Kurds envisioned Turkey as their future ally against Iran, Syria, and the Iraqi central government. At the time, Turkey had a hostile attitude toward the KRG mainly because the Kurdistan Workers Party (PKK) had bases inside the KRG the terrorist group would launch attacks into Turkey. Nevertheless, Turkey reciprocated the KRG's overture, eventually taking the economic steps of sending merchants, airlines, and goods. Booming economic ties have since changed the overall tenor of Turkish-Kurdish relations. Eight years after the pivot, Turkey is in peace talks with the PKK, Ankara provides the KRG with weapons against the Islamic State of Iraq and al-Sham (ISIS), and, perhaps most important, Turkey and the KRG share an undeclared economic commonwealth. 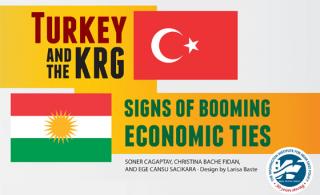 Drivers of the Turkey-KRG Commonwealth

Since 2007, Turkish companies have capitalized on the close proximity of the Iraqi market and pent-up consumer demand in the KRG. At the same time, the transborder mercantile culture of the Turks and Iraqi Kurds and the availability of experienced local small and medium-size enterprises (SMEs), dating to the oil-smuggling and sanction-busting days of the Saddam Hussein regime, helped facilitate trade. The KRG's determination to establish a business- and investment-friendly climate, coupled with the Turkish private sector's entrepreneurial spirit and normalized relations between Ankara and Erbil, resulted in significant economic cooperation.

During his April 2012 visit to Turkey, KRG minister of trade and industry Sinan Celebi pointed out that twenty-five new Turkish companies were launched every month in Iraqi Kurdistan, with more than half of foreign companies registered in the KRG being Turkish. In 2009, around 485 Turkish companies were operating in the KRG; by 2013, that number had increased to about 1,500. Turkey's business presence is visible, more than that of any other country throughout the area governed by the KRG. From shopping centers to housing projects to furniture stores and ubiquitous consumer and commercials goods, Turkish trademarks are to be seen everywhere in the KRG-governed area governed. As highlighted in the infographic included in the website version of this piece, Turkish companies are engaged in a wide range of sectors, including agriculture, banking and finance, construction, education, electrical power systems, health care, oil/gas extraction and services, telecommunication, transportation, tourism, and the water industry.

The movement of people between Turkey and the KRG highlights the region's interconnectedness. Most of this movement originates in Turkey, with the number of Turkish citizens entering Iraq steadily increasing since 2006, when the figure stood at 481,371. In 2010, 1,298,319 Turkish citizens entered the KRG through the Habur Gate, the sole border crossing between Turkey and KRG, with the figure staying about the same in 2013. Turkish citizens tend to travel to the KRG mostly for business, whereas Iraqi Kurds travel to Turkey for leisure and medical treatment, as well as business.

The number of flights between Turkey and the KRG further demonstrates the increased exchange of people between the two regions over the last decade. Construction of Erbil International Airport was begun in 2004 by two Turkish companies, Mak-Yol Construction, Industry, Tourism, and Trade Inc. and Cengiz Holding, and the airport opened to domestic and international traffic in 2010. The construction of a third international airport in the KRG, Duhok International Airport, with a total budget of $450 million, commenced in 2012. The joint venture, carried out by the same two Turkish companies involved in the Erbil airport, along with the Korean Incheon International Airport Corporation (IIAC), is scheduled to open by early 2016. Recently, however, the financial impact of fighting a war against ISIS has forced the KRG to suspend segments of the project.

Six airlines fly between Turkey and the KRG: Atlas Global, Iraqi Airways, Onur Air, Pegasus Airlines, Turkish Airlines, and Zagros Air. Based on information collected from the airline websites, the airline market analysis firm CAPA, media articles, and airports' flight schedules, in 2014 at least seventy-eight weekly flights operated between Turkey and the area governed by the KRG during the summer high flying season. This number has increased considerably from 2007, when flights between the two regions were nonexistent, and 2011, when only forty flights were scheduled.

Ankara and Erbil are both committed to developing infrastructure within the KRG, thus further deepening economic interdependence. Building an industrial zone along the Iraq-Turkey border, two more border crossings, additional oil and gas pipelines, airports, and upgraded highways will signal growing cooperation and promote long-term economic stability within the region. Turkey, which imports 95 percent of its oil and natural gas consumption, now buys three-quarters of its gas and oil from Russia and Iran and wants to decrease its energy dependence on both countries. Turkey's determination to diversify its oil and natural gas sources, aimed at averting disruptions that could cripple the Turkish economy, serves as a major incentive to deepen relations with the KRG. Despite past relations characterized by suspicion and disdain, Turkey and the KRG share a strong interest in maintaining their economic partnership for the long-term socioeconomic benefit of both.

Soner Cagaptay is the Beyer Family Fellow and director of the Turkish Research Program at The Washington Institute, and author of The Rise of Turkey: The Twenty-First Century's First Muslim Power, named by the Foreign Policy Association as one of the ten most important books of 2014.

Christina Bache Fidan is a PhD candidate at the University of Warwick and a research fellow at the Center for International and European Studies at Kadir Has University in Istanbul.

Ege Cansu Sacikara is the Yvonne Silverman Research Assistant at the Institute.