The Rise of Turkey: The Twenty-First Century's First Muslim Power

by Soner Cagaptay
About the Authors

Soner Cagaptay
Soner Cagaptay is the Beyer Family fellow and director of the Turkish Research Program at The Washington Institute.
In-Depth Reports

Institute Turkey scholar Soner Cagaptay's guide to both the inspiring potential and the grave challenges of Turkey's transformation into a true regional and global power. 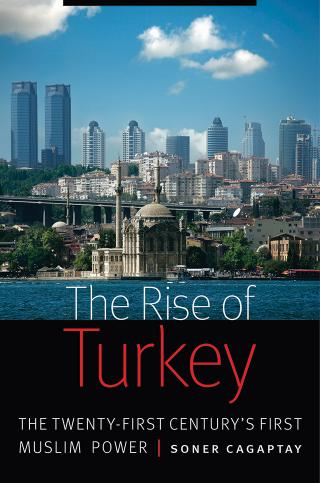 Turkey, a key NATO member, has always held an important position in global affairs. Lately though, Turkey has become even more prominent on the world stage as both an economic force and a Muslim power.

After more than a decade under the rule of Prime Minister Recep Tayyip Erdogan and his Justice and Development Party (AKP), Turkey’s trade patterns, diplomatic outreach, and cultural exports have transformed Turkey from an economically disadvantaged secular state into the first large Muslim nation with a middle-class majority. Erdogan has asserted Turkish influence in high-stakes, high-profile foreign issues from Gaza, to Egypt, to Syria, often breaking ranks with his NATO allies. Today, from the cafes of the Arab world to the boardrooms of the G-20, Turkey suddenly matters.

Soner discusses his book and Turkey's "next chapter."

A book talk at the State Department's Ralph Bunche Library

Erdogan has grand ambitions for his country. And his countrymen have great expectations of the Erdogan government which, when frustrated, have fueled widespread popular demonstrations.

The Rise of Turkey: The Twenty First Century’s First Muslim Power is a guide to Turkey’s changes, both in their inspiring potential and in the grave challenges they pose. Structured as a travelogue, each chapter opens on a different Turkish city and captures a new theme of Turkey’s transformation. From the Kurdish issue to foreign policy, the book argues that Turkey needs to successfully balance its Muslim identity with its Western overlay in order to become a regional and global power.

With his background in academia and policymaking, Dr. Cagaptay not only provides a detailed, colorful account of Turkey’s transformation, he also puts these changes into their broader, global context: how does Turkey’s success align with the rise of the BRICS nations? What lessons may be learned about Islam’s role in 21st century international politics?

Soner Cagaptay is the Beyer Family fellow and director of the Turkish Research Program at The Washington Institute. A historian by training, Dr. Cagaptay has written extensively on U.S.-Turkey relations, Turkish domestic politics, and Turkish nationalism. A frequent contributor to scholarly journals as well as top-tier media such as the New York Times and Washington Post, he is much sought after for his political commentary He has been a regular columnist for CNN.com and Hürriyet Daily News, Turkey’s oldest and most influential English-language paper, and he appears regularly on American and international television news programs.

Praise for The Rise of Turkey

"The Rise of Turkey: The Twenty-First Century's First Muslim Power ought to be read by anyone who wants to learn about Turkish politics and the challenges facing an important NATO ally."

- Birol A Yesilada, Journal of the Middle East and Africa