Not Money Alone: The Challenges of Syrian Reconstruction

A dedication to rural residents, more-efficient farming techniques, and a focus on cities other than Damascus will be necessary to build a new Syria.

The war in Syria has not ended, but all interested actors must begin mulling the country's reconstruction now if such an effort is to have any chance of success. This is the case despite uncertainties about the status of de-escalation zones, areas controlled by the Islamic State and the Syrian Democratic Forces, and other factors. To be sure, a postwar Syrian government will face challenges far beyond the obvious problem of amassing and distributing financial resources.

Underlying Causes of the War

Among the causes of the 2011 Syrian revolt were economic and geographic structural realities that accentuated political and sectarian problems. Indeed, a look at Syria on the eve of the uprising shows a center-periphery imbalance wherein large cities were surrounded by belts riven by poverty. Since Syria gained its independence in 1946, the population has grown rapidly, doubling every twenty years and creating unsustainable overpopulation in areas where agriculture did not offer enough jobs and where nearby urban economies could not absorb the labor influx. In the 2000s, the rural exodus accelerated when desperate populations flocked to informal suburbs, further burdening their already-strained economies.

A spark for this rural flight was the Syrian government's unpreparedness for and failure to respond effectively to the drought that afflicted the country between 2006 and 2011. More fundamentally, Syria's agricultural crisis played out amid intensifying liberalization of the national economy and the corresponding abandonment of regional planning policy. Undoubtedly, the system that emerged from the Hafiz al-Assad period, which ended with his death in 2000, was frayed and needed reforming. But under Bashar, Hafiz's son and successor, the private sector simply could not employ the hundreds of thousands of new workers entering the labor market every year. In the 2000s, rural areas and small towns suffered particularly, with economic growth concentrated in the largest cities -- Aleppo, Homs, Hama, Latakia, and, most of all, Damascus. 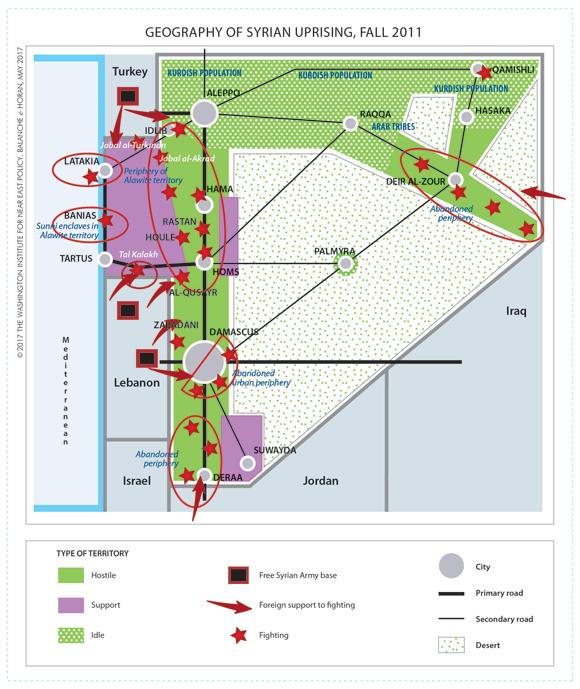 According to a July 2017 World Bank report, The Toll of War, more than 20 percent of houses in Syria (870,000 of 4,120,000 units) have been destroyed or severely damaged, and the proportion of destroyed or damaged schools, hospitals, roads, and oil- and gas-production facilities is even higher. The report estimates that the clearing of 15 million tons of debris in Aleppo and Homs alone will take years. Destruction is uneven across the country, however, with the provinces of Latakia, Tartus, and Suwayda having avoided widespread damage, whereas Aleppo and Deraa have been seriously affected. As a result of concentrated fighting in urban areas, 23 percent of Homs, 31 percent of Aleppo, and 41 percent of Deir al-Zour are in ruins. Having preceded the battle for Raqqa, the World Bank study consulted here shows a level of destruction that understates the current reality. Daraya, in the Damascus suburbs, was wiped off the map, and the industrial areas of Damascus and Aleppo suffered especially. In cases where materials were not destroyed, they were stolen and resold abroad, mostly in Turkey. 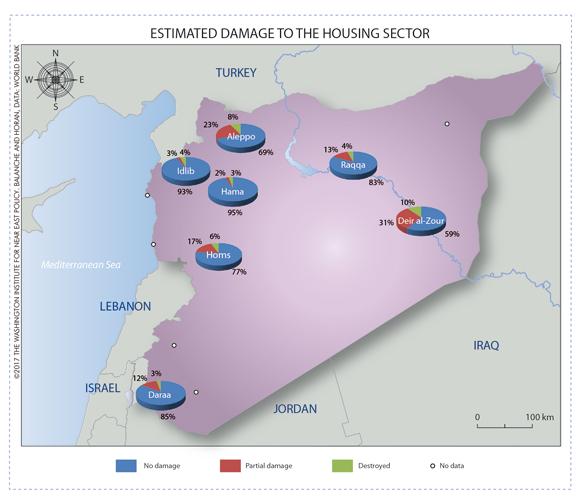 Electricity has proven easy to restore, but production still poses a problem. The Homs and Aleppo municipalities have quickly repaired their respective electricity grids, but production fell from 43 gigawatts in 2010 to 16 in 2015. After eventually retaking the gas and oil fields from the Islamic State, most of which it does not control, the state will have to recommence production and repair the damaged thermal power plants. This includes the gas infrastructure at Shaer, near Tadmur (Palmyra), the main source of electricity production, which IS destroyed in May 2016. Altogether, the Syrian government will require substantial external assistance to overcome such challenges.

An emergency need for the regime is to recapture eastern Syria and, moreover, the al-Omar oil field -- located between Deir al-Zour and Abu Kamal -- which accounts for 50 percent of Syrian oil production, thereby facilitating control over its energy resources. Syria's energy independence was one of its strengths before the war, with cheap energy boosting industrial development and irrigation-based agriculture. Furthermore, although little noticed, the Syrian army's recovery in spring 2017 of phosphate mines in Tadmur will be central to reviving an agricultural sector reliant on cheap phosphate fertilizers.

The challenge of reconstruction involves more than replacing infrastructure. As the World Bank report puts it, the conflict has "severely diminished economic connectivity, reduced incentives to pursue productive activities, and broken economic and social networks and supply chains. Simulations show that cumulative GDP losses due to such disruptions in economic organization exceed that of capital destruction by a factor of 20 in the first six years of the conflict."

Although the reconstruction of Syria presents an opportunity to correct prewar inequities, any such process will be lengthy, expensive, and rooted in decentralization. But residents of areas marginalized by the last twenty years of economic liberalism will require such adjustments. Northeastern Syria, consisting of the Euphrates Valley and Jazira, provides a useful case in point. Before the war, the populations of these areas were demanding administrative jobs and public services, as under the socialist economy of the 1970s and 1980s. A kind of paradox of the war, therefore, is that whereas most Jazira residents did not back the Bashar al-Assad regime or its economic liberalization, they now long for a supposed Baathist golden age that was never economically viable to begin with. In particular, the regional development policy put forth by Hafiz, based on the extension of irrigation-based agriculture in dry areas, reached its limits at the end of the twentieth century. The demands of northeastern farmers will therefore be very difficult to satisfy.

Such dynamics explain why a future Syrian state must promote private investment in its peripheral areas. This shift will require ending a system in which the slightest action requires authorization from Damascus. It will also require, once the governance problem is resolved, developing communication and energy infrastructures in outlying areas. Although Syria traditionally has a rather balanced urban network -- driven by an entrepreneurial urban bourgeoisie that can energize the various regional economies -- cities such as Homs and Aleppo, which tended to counterbalance Damascus, have suffered greatly during the war. Therefore, they must be given priority for reconstruction, lest Damascus swell into an urban behemoth approximating Cairo while the other cities contract.

In recent decades, mirroring the trends already discussed, rural areas and small towns have faced neglect, with residents experiencing a rising disparity, as compared with city dwellers, in access to public services and employment opportunities. Remedying this dangerous situation, to start, will demand a better communication strategy aimed at integrating rural areas into the new urban economy. It also means understanding that rural residents would prefer to remain in their home communities -- and commute to work -- rather than living in degraded conditions in informal suburbs. Reversing prewar migration trends must therefore be a priority, given the limited capacity of Syrian cities to absorb new arrivals. Failure to acknowledge such risks could lead to violence and frustration among the new inhabitants.

In 2010, Syria was only spared an official "water scarcity" tag by provisions from the Euphrates River and, marginally, the coastal basin. But most of the country was, in fact, suffering from water scarcity. In the Fertile Crescent, from Deraa to Qamishli to Aleppo, groundwater levels had decreased dramatically. Transfers from one basin to another are too expensive as a solution -- and unsustainable.

In reconsidering its agricultural model, Syria must seek to upgrade its irrigation methods. In particular, such methods must be modernized around the Euphrates Valley if they are to endure. Likewise, for cotton production to remain profitable in Jazira, water-allocation standards must be reformed. Domestic distribution also needs to be altered. Cheap water encourages waste -- people previously cleaned their cars daily in downtown Damascus, where water was plentiful -- and the public water company was and still is largely inefficient. In most suburbs, meanwhile, water only flows a few hours a week. Nevertheless, water reform will face resistance.

If the state fails to restore reliable access to water and electricity, a private market will develop, as occurred in Lebanon. Almost three decades after the end of their civil war, Lebanese must sign up with expensive neighborhood generators and buy steeply priced water from truck tanks. Unfortunately, once such private providers have gained protection from influential politicians, rebuilding efficient public services becomes more difficult.

These recommendations notwithstanding, Syria's reconstruction -- hobbled by inadequate financial resources and forces seeking to resurrect the very prewar realities that destabilized the state -- is likely to have a disorderly, day-to-day feel. A weak Syrian government will also need to cope with the local power brokers who emerged during the conflict. All this could contribute to a scenario akin to the urban, environmental, and social breakdown faced by Lebanese a full generation after their civil war. To avert such an outcome, all players -- local and international -- will have to demonstrate a cooperative, impartial spirit rarely observed over the last six years.