by Aaron Y. Zelin
Also available in
About the Authors

Although the cessation of governance-related media releases suggests a full retreat, IS remains active in military campaigns and eager to rise again by taking advantage of local grievances.

According to a field commander of the Kurdish-led Syrian Democratic Forces (SDF), the last Islamic State (IS) holdouts will lose control of Raqqa, the group's self-proclaimed capital, by sometime in the third week of October. Alongside the fall of Mosul, the IS stronghold in Iraq, this development marks a second collapse of governance for the jihadists.

Reflecting this failure, for the first time since IS began systematizing its governance capabilities in late 2013 and early 2014, the group's media apparatus has not, for roughly a month, released any material related to governing, social services, or dawa (proselytizing and outreach activities). The most sophisticated system of jihadist governance ever established thus appears to be dwindling to nothing. All the same, it is worth noting that the media silence may not indicate the absolute cessation of IS governance -- indeed, the group is likely engaging in basic governance in certain areas along the Iraq-Syria border -- but instead the further erosion of its media apparatus.

The First and Second Islamic State

Preceding the recent bid for jihadist governance was an earlier, more limited attempt that lasted from around 2006 to 2009 by the Islamic State of Iraq (ISI), as the group was then called. Governance in name only, it occurred just in Iraq and had mainly a law-and-order emphasis rather than one encompassing comprehensive services. Moreover, it relied mainly on hisba-like (moral policing) activities. This attempt was temporarily quashed by the U.S. troop surge and the sahwa (awakening) movement among Sunni tribesmen.

The second IS attempt at governance, far wider-reaching and more sophisticated, emerged in Syria from April 2013 to January 2014. Before ISIS, as it was then known, fell out with Syrian revolutionaries and al-Qaeda, and before announcing its establishment of a caliphate in June 2014, the group sought mainly to project a positive self-image to the Syrian population through dawa forums and delivery of basic services. It also conducted softer moral policing, such as burning cartons of cigarettes or confiscating alcohol bottles. IS also positioned itself as a state-like entity, showing off its various administrative departments, including its dawa offices, sharia courts, religious schools, police stations, and local municipalities, among other features. This process was uneven until the June 2014 caliphate announcement, with the subsequent expanded IS governance following a particular methodology (click on the table for a larger view). 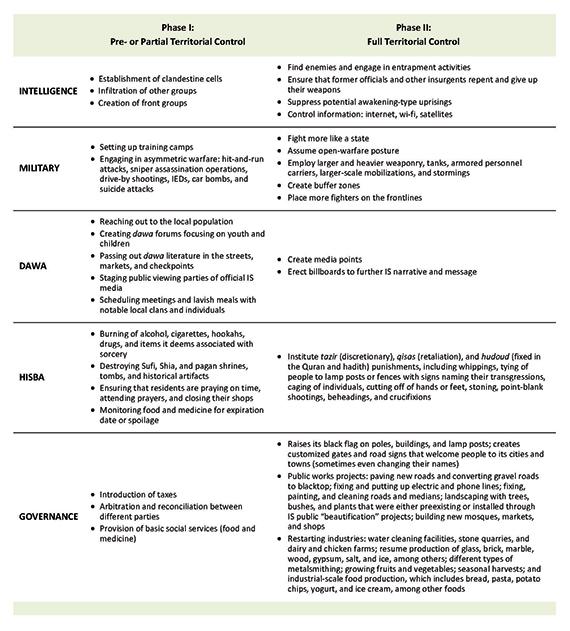 Correlation Between IS Media and Governance

Because about 65% of Islamic State media releases consist of images, which the group disseminates much more often than official videos, images will here constitute the measure for media activity overall. Indeed, based on this measure, IS media releases on governance peaked in summer 2015 and have fallen gradually ever since. This degradation is no doubt linked to the broader U.S.-led military campaign, which has narrowed the space for governance opportunities.

In particular, after the fall of Mosul in July 2017, the IS distribution of governance-related media dropped precipitously (by 66%) until the complete end of such media activity (on September 12 in Syria; September 16 in Iraq). For reference, at its apex, between June and August 2015, IS released 3,762 pictures related to governance activities in Syria and 3,305 in Iraq. When Mosul fell, between May and July 2017, IS only released 315 pictures related to governance in Syria and 171 in Iraq. And the most recent count prior to the mid-September 2017 rupture was 142 in Syria and 113 in Iraq, between July and September 2017. These figures show the extent to which the group's governance capacity as well as its media campaign have been hurt by the anti-IS military campaign.

The dissipation of Islamic State media activity should not be interpreted to reflect disinterest in continuing to govern and conduct itself as a state. At the current stage, the group simply cannot sustain such activity. Yet should the opportunity arise again, IS will likely seek to govern, as it has already attempted on a limited basis in places like the Sinai Peninsula or Afghanistan. The case of Libya, however, illustrates fundamental challenges to such an endeavor. Having only just reemerged militarily after being booted from Sirte in December 2016, the group has yet to establish a base from which it can again govern in the country. Correspondingly, IS governance structures throughout Iraq and Syria  may take years, rather than months, to resurface in their previous capacity, depending on the clear-out and administration of post-IS territories by the Iraqi or Syrian governments or by other, nonstate actors like the Kurdish-led SDF or the Iraqi Shia-led al-Hashd al-Shabi. Further demonstrating this difficulty, IS has yet to reestablish governance in Mosul since it lost control in July.

Beyond the governance angle -- and despite IS maintaining authority only in certain towns straddling the Iraq-Syria border -- the group continues to conduct military operations. On this count, it is worth recalling that between the tactical defeat of ISI following the sahwa movement and troop surge around 2009, and its reemergence as ISIS around 2012-13, Iraq remained the most violent conflict in the world. This reality illustrates the incredible lethal dangers posed by IS even if it does not control territory. Furthermore, the IS of today is stronger than the group's previous incarnation in 2009-12, with violence in Iraq currently three times more deadly than during the roughly four-year period following the surge. The bureaucratic apparatus might be dormant, but the insurgent capabilities remain formidable.

As a consequence, future scenarios will depend largely on the economic, social, and political situation in both Iraq and Syria and whether a new vacuum will open up as a result of poor management of post-IS territory populated mainly by Sunnis. Indeed, such a vacuum formed in the years after the surge, and Washington therefore must learn from its mistakes of the last decade. These mistakes included withdrawing too early and allowing local governments to marginalize or terrorize Sunni populations, with signs of the latter already reappearing in Iraq. To be sure, such dynamics allowed the earlier incarnation of IS to rebuild its capabilities. Further, in Iraq and Syria today, many of the grievances that fueled the rise of the Islamic State persist.

Aaron Y. Zelin is the Richard Borow Fellow at The Washington Institute.