Idlib May Become the Next Gaza Strip

Given the military situation on the ground and the overriding interests of each party, the jihadist-run rebel pocket will likely be further reduced into a small, overpopulated border strip north of the M4 highway.

Russia and Turkey’s March 5 ceasefire agreement in Syria’s Idlib province was the latest step in a process that has shrunk the rebel pocket in half since April 2019. Yet even this arrangement is only temporary given Bashar al-Assad’s determination to do away with what he and his allies see as “Jihadistan.” A closer look at the area’s territorial and demographic situation shows how ongoing developments will likely lead to the creation of a “New Gaza Strip” in northwest Syria—that is, an overpopulated refugee zone where terrorists are in control, essentially forcing the international community to work with them because they are the “de facto authorities,” as the UN puts it.

FROM “GREATER IDLIB” TO “SMALL IDLIB”

The rebels now control only 3,000 square kilometers of Idlib, down from 7,000 last April and more than 9,000 in September 2017, when the Syrian army launched its first major offensive to retake “Greater Idlib.” Earlier this month, the UN Office for the Coordination of Humanitarian Affairs (OCHA) estimated the rebel pocket’s population at 2.6 million. It was 3 million in April 2019, including 1,300,000 internally displaced persons (IDPs). Since then, more than 400,000 people have fled the pocket to seek refuge in the portion of north Aleppo under direct Turkish control. Fearing regime violence and realizing that housing is saturated in Idlib, the majority of them settled in Afrin, in homes abandoned by Kurds who fled the Turkish offensive of winter 2018. 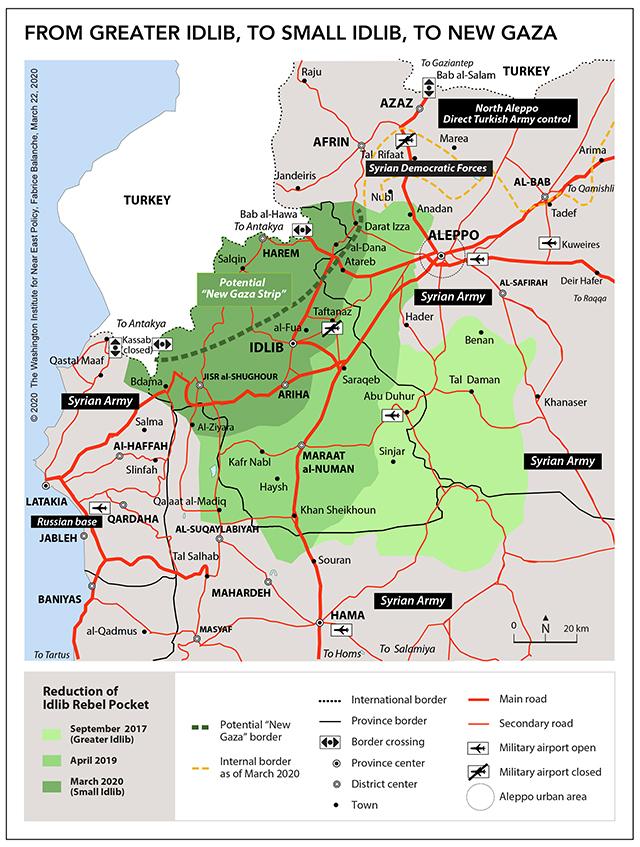 Regarding rebel fighters, the Idlib pocket contained around 50,000 a year ago, though it is difficult to estimate their number today due to war losses and departures. The architecture of the rebellion remains the same, with the organization Hayat Tahrir al-Sham (HTS) dominating, flanked by various jihadist groups still officially linked to al-Qaeda. Some groups were involved in the most recent battle against the regime but no longer hold territory in Idlib (e.g., Failaq al-Sham, Jaish al-Ahrar). They are now based in north Aleppo and came over with the Turkish army.

In the civil field, HTS has cemented control through its “Government of Salvation,” created in September 2017. This administration gradually ousted the local structures of the interim government based in Gaziantep, Turkey, as well as local committees that benefited from international NGO support. Turkish authorities are therefore being pragmatic about the situation by working closely with HTS in Idlib. Group leader Abu Muhammad al-Julani hopes to see the pocket become a Turkish-protected buffer zone where his Islamic emirate can flourish. Yet his dream would now have to be squeezed into “Small Idlib,” a territory only one-third as large as the zone previously envisioned—and which could shrink even further as described below.

Two-thirds of Idlib’s population is now clustered in a 1,000-square-kilometer strip bordering Turkey. That amounts to 2 million people, or four times more than this frontier area originally held. Several hundred thousand IDPs have settled there since 2012. Most of them have crowded into makeshift field camps, especially once the more formal IDP camps filled up. Accommodations in the strip’s small localities are also saturated and offer even worse conditions than the camps. The fact that this overpopulated area is now wholly under the thumb of designated terrorist groups makes the comparisons to Gaza unavoidable. 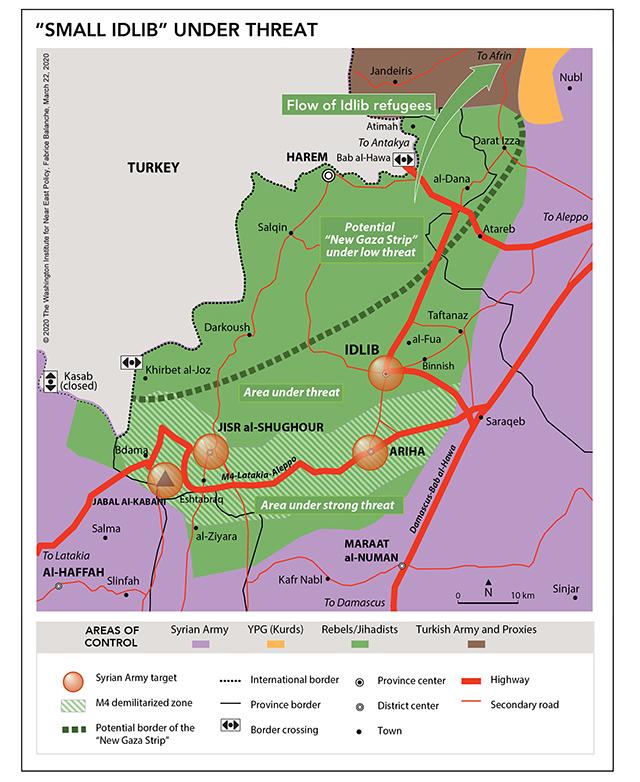 Unlike other civilian areas in Idlib, the border strip has been spared aerial bombardment—not because it abuts Turkey, but because this area is precisely where Assad and his allies want civilians from the rebel zone to flock. The proximity of humanitarian aid via the nearby Bab al-Hawa crossing is another powerful pull factor for IDPs; once on Syrian territory, NGOs and UN agencies do not stray too far from the crossing for security reasons. Moreover, few IDPs seem keen on returning to their homes in other parts of “Small Idlib” that lie further from the border but are still under rebel control. These areas have been bombed during past fighting, and former residents have no trust in the current ceasefire; rather, they are poised to flee into Turkey or north Aleppo in the event of another regime offensive.

COMPLICATIONS IN THE REST OF “SMALL IDLIB”

The portion of the rebel pocket that lies between “New Gaza” and regime-held territory is currently around 2,000 square kilometers in size and home to half a million people. Most of them are original residents or older IDPs who are now in permanent housing or collective shelters, with very few informal camps.

Newer IDPs have avoided this area because it is too close to the frontlines. This includes Idlib city; during the last offensive in February, many inhabitants fled the provincial capital. Its current population is 200,000 at most—higher than its prewar total of 150,000, but small compared to the province’s massive number of IDPs. The regime bombs Idlib regularly because it does not want the HTS government to constitute a competing administration in a safe capital. Its counterinsurgency strategy demands that Idlib city either fall back into regime hands or live under permanent military threat.

As for small towns like Atareb, Taftanaz, and Binnish, they are hardly safer than Idlib because they are now within firing range of regime artillery. South of the M4 highway, Jabal al-Zawiya is now empty, since the population was afraid of getting surrounded if that road becomes a new demarcation line.

Along the M4 itself, which connects Aleppo and Latakia, a strip of territory twelve kilometers wide has been demilitarized. Moscow and Ankara have demanded that their forces be permitted to conduct joint patrols freely along this route: the Russians on the southern route, and the Turks on the northern route. Jihadist groups reject this concession because it means dismantling their main line of defense south of Idlib and placing Jisr al-Shughour, Jabal al-Kabani, and Ariha squarely in the sights of the Syrian army.

A key strategic point, Jisr al-Shughour had 50,000 inhabitants before the war, the vast majority of them Sunni Arabs. It is the gateway to al-Ghab plain from the north and the regime’s core Alawite region from the east. The army clung to it until May 2015, when HTS predecessor groups captured it. Hundreds of Alawite civilians were killed and kidnapped in the offensive, which extended to the villages of Eshtabraq and al-Ziyarah south of the city. The desire to avenge these deeds, coupled with the city’s strategic value, make it a priority objective for the regime even though it lies north of the M4.

Southwest of the highway, Jabal al-Kabani is the backbone of Jisr al-Shughour’s defense. This massif dominates al-Ghab plain and the upper valley of Nahr al-Kabir River, the natural route linking Latakia to Jisr al-Shughour. The regime has been bombing Jabal al-Kabani intensively since April 2019, but its ground offensives have broken on the jihadist defenses. The largely Uyghur Muslim defenders dug a network of tunnels that make the massif a real bunker. If the rebels lose the M4, however, Jabal al-Kabani will be surrounded.

Ariha, a town south of the highway that once held 60,000 inhabitants, is nearly empty now due to heavy bombardment in February. The Syrian army made the town a priority during the last offensive because the nearby hills dominate the countryside for tens of kilometers.

The Turkish army has a light presence on the M4 frontline because protecting “New Gaza” is now its main concern. Ankara does not want to see a panic in which 2 million new refugees try to push into Turkey. Although its forces built additional observation posts near Jisr al-Shughour and Saraqeb, such stations do not offer serious protection to local populations—during the last offensive, eight of the twelve posts Turkey established in 2018 were surrounded by the Syrian army. The presence of 9,000 Turkish soldiers in “Small Idlib” is more formidable, but how much longer will they stay?

Each player in Idlib has clear and critical objectives. Russia wants to do away with what it sees as a terrorist nest. HTS and other jihadist groups have their backs to the wall and are therefore ready to fight to the bitter end if need be, at great cost to opposing forces. Assad still wants to reclaim as much Syrian territory as possible, but emptied of the people who oppose him. Turkey refuses to cede yet another part of Idlib without compensation that helps it counter its Syrian Kurdish enemies to the east; and above all, it does not want more refugees. Likewise, the European Union trembles at the prospect of several million new refugees heading for its borders.

These interests—coupled with the military situation on the ground and Washington’s apparent lack of interest in seriously confronting Russia over Idlib—suggest that the most likely scenario is a compromise in which the rebel/IDP pocket is further reduced down to “New Gaza.” Obviously, this is not the best solution for the millions of Syrians who are confined in this cramped territory, but none of the players seems to regard that as sufficient reason to pursue a different course.

Fabrice Balanche is an associate professor at the University of Lyon 2, an adjunct fellow with The Washington Institute, and author of Sectarianism in Syria’s Civil War: A Geopolitical Study.