The escalating conflict remains a sectarian war, and deliberate ethnic cleansing by various actors is drawing new internal borders that will be difficult to erase.

Between refugees and internally displaced persons (IDPs), more than half of the Syrian population has left their homes since the war began in 2011. To understand why this has happened and what can be done to reverse it, one must examine the country's demographics in detail. 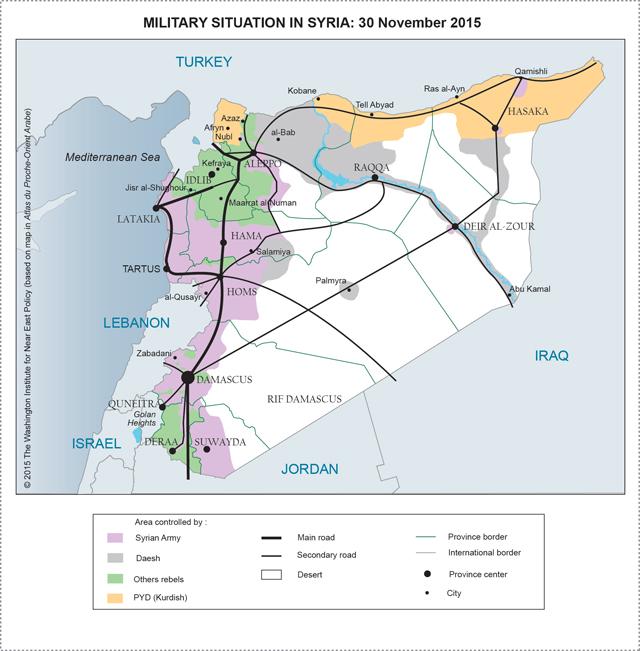 Syria currently has around 16 million residents -- a far cry from the 2010 UN projection that the population would reach 22.6 million by the end of 2015. The birth deficit and excess mortality (violent and natural) have reduced the natural population growth by half since 2011. Even if refugees are added to the current population figure, the total would be only 21.3 million, or 1.3 million less than the prewar projection. The Office of the UN High Commissioner for Refugees (UNHCR) has registered 4.2 million Syrians thus far, but that figure undervalues the actual number of refugees by at least 20%. Some refugees refuse to register for fear of being arrested and taken back to Syria (as is happening in Lebanon), while many wealthy refugees do not see the point of registering. So a more realistic estimate of total refugees is 5.3 million.

That number is expected to increase sharply. In Aleppo province alone, escalating hostilities have spurred another 200,000 people to leave their homes in the past two months. The Russian offensive and the lack of short-term hope for peace have convinced many living in relatively calm areas to leave as well, and more may follow suit if the recent German-led plan to welcome more refugees is implemented.

Although it is difficult to give an exact number for IDPs, the available data suggests that 6.5 million Syrians have fled violent areas for safer areas of the country. This includes about 2 million who have fled to the current government-controlled zone from areas controlled by other factions, as well as millions of others who fled one regime-controlled area for another due to intense fighting.

The areas held by rebels (the northwest, the south, and other small pockets such as Ghouta) have lost the most people because they are the least secure -- Russian and regime airstrikes impede normal life there, and the presence of numerous different rebel factions creates persistent insecurity. The area held by the self-styled Islamic State (IS) seems safer, in part because it has a central authority. Although religious minorities and secular Sunnis fled Raqqa and Deir al-Zour, they were replaced by foreign jihadists and Syrians displaced from Aleppo. In general, people tend to seek refuge where they have relatives, and where there is no fighting; the identity of the faction that controls the area does not necessarily matter to them as much. The Kurdish area attracts displaced Kurds but few Arabs -- no surprise given that the faction in control, the Democratic Union Party (PYD), aims to make the area ethnically homogeneous.

Mainstream media reports often highlight the fact that the Syrian army controls less than 17% of the country, and IS over 50%. Yet these seemingly shocking figures do not factor in Syria's geography -- namely that 47% of the country is sparsely inhabited steppes. Of course, extending control over some of the steppes may hold ​​strategic interest for IS; Palmyra is a traffic hub with important gas and oil resources, for example, and it borders Iraq and Jordan. In any case, the Assad regime controls the largest share of Syria's residential areas, and also the most populated area. Around 10.1 million inhabitants live in the government zone, or 63% of the total resident population. The areas controlled by the other three main factions (Kurds, IS, and rebels) are roughly equal, with about 2 million each. In short, the regime has gone from controlling about 20 million Syrians prewar to about 10 million now.

The large-scale population movements have not been a simple byproduct of war. Rather, they represent conscious strategies of ethnic cleansing by each faction.

To be sure, the ethno-sectarian composition of the country as a whole has not changed much, despite the departure of disproportionately Christian and Sunni Arab refugees. Christians have traditionally been scattered throughout the country and do not have their own area of refuge like the Alawites and Druze, spurring many of them to flee abroad. As for Sunni Arabs, because the insurgency took root in their ranks, they have been the first target of regime repression and airstrikes (though some Sunni clans support Bashar al-Assad and have remained safe in the government zone). Overall, Syria's current population is 22% religious minorities, 16% Kurds, and 61% Sunni Arabs -- in other words, not that different from the prewar composition.

These figures could change in the coming months, of course, particularly if the PYD creates a continuous zone of Kurdish control along the border with Turkey by seizing territories between Azaz and Jarabulus. Any such move to connect the northwestern Kurdish enclave of Afrin with the rest of the PYD's territory in the northeast (known as Rojava) could spur hundreds of thousands of Sunni Arabs to flee. Meanwhile, expanded efforts to eliminate IS will likely produce an internal Sunni war between tribes supporting the terrorist group and other factions, creating further refugee flows. 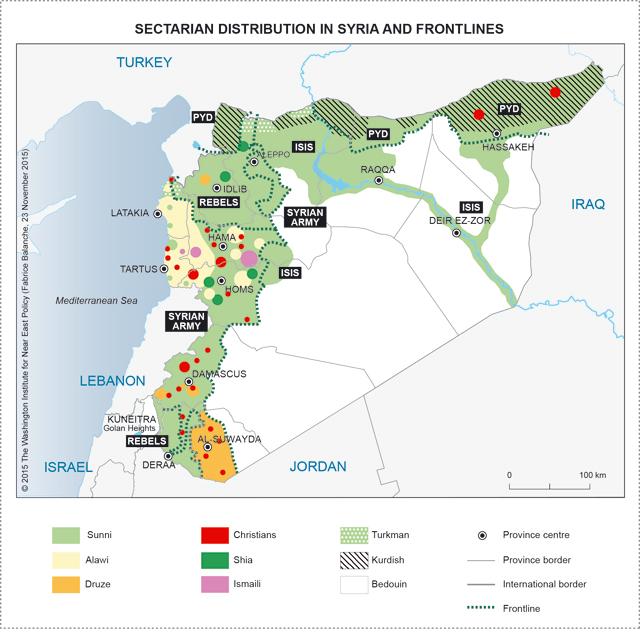 
For now, Syria's overall population figures hide the rampant ethnic separation already occurring within territories controlled by each faction. Acutely aware that its Alawite base is a shrinking minority, the regime has created a zone of control with 41% religious minorities, compared to the national figure of 22%. The army consistently prioritizes asserting its grip over Christian, Alawite, Druze, Ismaili, and Shiite localities.

In contrast, rebel victories often spur local religious and ethnic minorities to depart. Only the Druze area of Jabal al-Summaq in northwestern Idlib province remains in the rebel zone, enjoying special Saudi protection in connection with Lebanese Druze leader Walid Jumblatt -- it is the fragile exception that proves the rule. Rebel groups dominate a Sunni Arab territory; the main minority there is Sunni Turkmen, which is probably the most anti-Assad group.

Similarly, all religious minorities tend to flee IS-held areas. Some Kurds have remained behind; IS does not seem to distinguish them from local Sunni Arabs, probably because they are Sunni believers as well. That said, many secular Kurds have fled to PYD territory.

In the Kurdish zone of Rojava, Arabs must agree to live as minorities -- as the Kurds did during centuries under Arab rule -- or leave. This reversal of power is intolerable for many Sunni Arabs accustomed to dominating the northeast, leading some to support IS.

The fact that the regime-controlled zone is the most diverse does not mean that Assad is more benevolent than the rebels, Kurds, or IS. Rather, it reflects his political strategy. He knows he must expel millions of Sunni Arabs to make the balance of power more favorable to minorities who support him. He also needs to divide the Sunnis by redistributing land and housing that belonged to refugees, making loyalist Sunnis who remain behind even more beholden to him and pitting them against any who decide to return.

In sum, the Syrian conflict is a sectarian war, and ethnic cleansing is an integral part of the strategy used by various actors, even if they claim otherwise.

Although many refugees and IDPs will want to return home once peace is established, they will be unable to do so because of their ethnicity and/or political affiliation. Resettling displaced people will become a strategic question for each player. Their efforts at local ethnic cleansing are already making Syria's de facto partition more and more irremediable. Sectarian diversity is disappearing in many areas of the country, and this process of regional homogenization is drawing internal borders.

Yet formal partition is not necessarily a good solution. It could generate new conflicts, as seen when Sudan split and then the new country of South Sudan dissolved into civil war.

Therefore, the international community may need to work toward a Syrian agreement that lies somewhere between the Taif Accord, which imposed a kind of unity on Lebanon, and the Dayton Agreement, which imposed a difficult partition on Bosnia under intense foreign supervision. Syria's various communities will accept living in a new, united Syrian Republic, but not the Syrian Arab Republic as it existed prewar. A federal system would be the best political regime because the previous centralization cannot be reestablished, whatever the ruling group.