The Druze and Assad: Strategic Bedfellows

The strategically important Syrian Druze will not be won over unless they are cut off from Damascus, and even then they would need concrete assurances that international forces will protect them from hostile jihadists.

Although Syria's Druze are a relatively small minority community and have sought to avoid deeper involvement in the war, their strategic position in the mountainous southern region of Jabal al-Druze necessarily gives them leverage over those seeking to control the country's future. Until fairly recently, the Sunni Arab opposition had multiple opportunities to take advantage of this leverage, since Druze loyalty toward Bashar al-Assad's regime was minimal at best. Yet Assad has managed to exploit the community's fears and convince them to cooperate more actively in defending the Damascus heartland, thanks in large part to a string of rebel mistakes.

As of 2010, the last year for which reliable census figures are available, around 700,000 Druze were living in Syria, comprising 3 percent of the general population. The majority of them lived in Suwayda province, whose population of 375,000 inhabitants was 90 percent Druze, 7 percent Christian, and 3 percent Sunni. Another 250,000 Druze resided in Damascus and its outskirts (Jaramana, Sahnaya, and Jdeidat Artouz), along with 30,000 on the east side of Mount Hermon and 25,000 in fourteen villages in Jabal al-Summaq northeast of Idlib. The war has changed the south's demographic distribution significantly, with about 100,000 internally displaced Sunnis migrating to Jabal al-Druze. Many Druze from Damascus fled south as well once the capital area became unsafe. 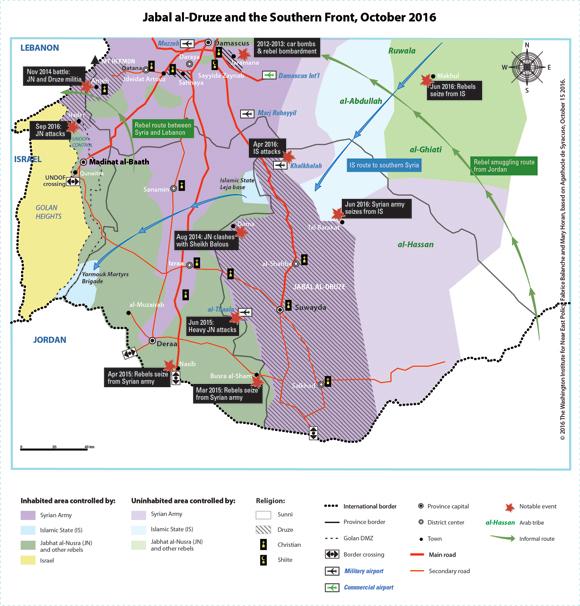 The Druze suburbs of Damascus play a key role in the city's defense, since they surround rebel localities such as Daraya and cut off contact between the Sunni districts of East and West Ghouta. Similarly, the Druze villages of Mount Hermon act as a loyalist stronghold on the capital's southeastern edge and allow the Syrian army to remain in contact with the Golan Heights. They also prevent rebels in Deraa province from linking up with those in the Qalamoun area northeast of Damascus. Meanwhile, Jabal al-Druze provides a buffer to the south of the capital and maintains Syria's symbolic land connection to Jordan, which the regime hopes will prevent more rebels from entering the country from that direction. In addition, military air bases in the area help defend Syrian army positions in Deraa province. More generally, the mountain stronghold looms as an ever-present threat to rebel forces in that province.

The Syrian army is not deeply involved in defending Jabal al-Druze; most of that task is handled by some 10,000 local militiamen who know the terrain and are more motivated to defend their homeland than they would be defending the regime in Aleppo or Homs. Maintaining Druze conscripts in Suwayda province is part of the informal agreement that Assad reached with the community's spiritual leaders, called the sheikhs of Akel; he relies heavily on these leaders to control the Druze.

REBEL ATTACKS ON THE DRUZE

Tensions with the Sunni opposition in Deraa surfaced as early as 2011, when some protestors and armed rebels began to use slogans associating the Druze with Assad and branding them as heretics (often goaded on by radical Sunni religious leaders). Some Druze villagers were taken hostage and ransomed or murdered; in December 2012, for example, al-Qaeda affiliate Jabhat al-Nusra (JN) kidnapped senior Druze dignitary Jamal Ezzeddine and sixteen of his companions. At the time, he had good relations with both regime officials and the opposition; he was killed a few months later.

Elsewhere, the Damascus suburb of Jaramana has suffered violent attacks since spring 2012. And in autumn of that year, JN led other rebel groups in an offensive against Jabal al-Druze. In response, the Druze abandoned their former neutrality and created a local militia with the help of the Syrian army.

Since then, JN has regularly attacked Jabal al-Druze, including a serious battle in the northwest quadrant on August 17-20, 2014. The militia of Sheikh Walid al-Balous, which was pro-government at the time, stood out for its efforts in that clash. In June 2015, simultaneous with the Jaish al-Fatah (Army of Conquest) offensive in northwestern Syria, rebels belonging to the Southern Front attempted to seize al-Thaala military airport, which is essential to the defense of Suwayda. They were stopped by the Syrian army and Druze militias, some of which fought fiercely to protect the provincial capital. This development is particularly striking when one recalls that Druze residents of Suwayda had revolted against the regime in November 2000, resulting in a military crackdown that left dozens dead and hundreds injured.

When the Syrian uprising began to grow in spring 2011, Jabal al-Druze was boiling, inspired by the memory of Sultan al-Atrash, the Druze leader who rebelled against the French occupation in 1925. Protests broke out in Suwayda, but the Sunni opposition's different political programs (promulgated by the Syrian National Council and then the Syrian National Coalition) did not meet the community's expectations. Secularism, which the Druze consider their only guarantee of safety, was never mentioned -- instead, the opposition council adopted the concept of a "civil state," which in Islamic terminology is an Islamic state governed by sharia law. Distrust of the rebels remains high today due to regime propaganda, which often cites the famous fatwas of Sunni scholar Ibn Taymiyyah calling for extermination of the Druze.

Yet when the rebellion began, some Druze still hoped to join the fight. In August 2011, a Druze deserter from the Syrian army, Maj. Khaldun Zeineddine, created an anti-Assad armed group called the Sultan al-Atrash Brigade, which promptly joined with Sunni rebel groups in Deraa. It participated in several offensives against regime targets in Jabal al-Druze but failed to gain significant support among locals. In 2013, JN arrested the brigade's members and condemned them to death. They were eventually released thanks to the intervention of other rebel groups, but they felt compelled to flee to Jordan. This episode left deep scars, convincing many Druze that they were not welcome in the revolution. The rebels generally regarded any Druze involvement as insincere, and in some cases only conversion to Sunni Islam spared local Druze from death -- in 2015, JN forced residents of Jabal al-Summaq to destroy their shrines and convert.

At the same time, completely tying their fate to Assad remains an unsatisfactory solution for the Druze, since his fall would leave them defenseless. One alternative considered in the past was to establish an autonomous Jabal al-Druze region under international protection, with an open border to Jordan. This option began to seem more feasible when the Syrian army seemed on the verge of collapse in spring 2015.

Sheikh Balous was one of the first Druze to create a pro-regime militia, and by 2014 he was distinguishing himself in clashes such as the Battle of Dama. He asked Assad to provide heavy weapons to militias in Jabal al-Druze in order to defend the area more effectively. At the same time, however, he entered the political debate, echoing his community's concerns by criticizing the high cost of living, rampant corruption, and the conscription of Druze men to fight on frontlines outside Jabal al-Druze. By June 2015, his militia had grown to around 1,000 fighters, and he was receiving foreign funding to buy weapons, including from Israeli Druze concerned about the fate of their Syrian brethren. Yet on September 5 of that year, he was assassinated under mysterious circumstances, and his militia was disbanded.

There is little doubt that the Assad regime had Balous killed, most likely because he had become too ambitious in pushing Jabal al-Druze to secede. In June 2015, for example, Balous and his brigade stood aside when rebels led by JN tried to seize Thaala airport; instead of fighting off the attack, he urged the Druze to seize army positions and government buildings, with no success. At the time, he may have believed that the army was on its way out of Jabal al-Druze given the successful rebel offensives in Idlib province and around Deraa (e.g., the key southern town of Busra al-Sham had fallen that March). He may also have felt that Assad's fall was imminent, perhaps allowing Balous to become the leader of a Druze safe zone. Whatever the case, his death and the Russian intervention shortly thereafter completely changed the balance of power on the ground, so the Druze are unlikely to gamble on further secessionist attempts anytime soon.

As things stand, it will be difficult to detach Jabal al-Druze from the Assad regime by mere persuasion. The Druze will not be won over unless they are cut off from Damascus, and even then they will need very concrete assurances that international forces will protect them from jihadist groups such as JN and the Islamic State. Jabal al-Druze residents do not wish to suffer the same fate as their co-religionists in Jabal al-Summaq. Thus, if Washington and its partners want this strategic minority to play any role in ousting the regime or otherwise ending the war on favorable terms, they will need to demonstrably reassure local Druze that they have a safe future in Syria without Assad's patronage.