Eastern Syria holds major hydrocarbon and agricultural resources that make it a vital asset in Assad's quest for regime self-sufficiency, and a potentially powerful source of U.S. leverage against him.

In the Western media, the term "useful Syria" is sometimes used to describe the portion of the country between Aleppo and Damascus, which the regime has spent most of its efforts trying to reconquer. By extension, the eastern provinces are essentially regarded as "useless Syria," at least in military terms, leading many to wonder why Bashar al-Assad continues to insist on retaking them along with every other inch of the country. Yet the east is hardly useless to him -- in addition to producing most of Syria's ​​cereals and cotton, it is home to the bulk of its oil and gas wealth. Controlling the east is not necessary to win the war, since Iran and Russia provide the regime and its supporters with enough energy and food. Yet the region is indispensable if Assad plans to rebuild the country, restore its economic independence, and -- most important from his perspective --guarantee the regime's political autonomy.

Over the years, the Baath regime built a self-sufficient autocratic economy that has proven indispensable to its political independence. In the 1990s, Syria began a slow economic liberalization that accelerated under Assad, but the regime still kept a tight grip on certain sectors to ensure its energy and food independence. This in turn allowed it to maintain a balanced external trade and thus no external debt.

The exploitation of agricultural and energy resources in eastern Syria was essential to this process. In 2010, the eastern provinces of Hasaka, Deir al-Zour, and Raqqa produced 57 percent of the country's cereals and 75 percent of its cotton, according to data from the Central Bureau of Statistics. Similarly, most of Syria's oil is in Deir al-Zour and Hasaka; in 2010, production reached 380,000 barrels per day, of which 140,000 were exported, according to the U.S. Energy Information Administration. The discovery of natural gas fields in the Palmyra area spurred the conversion of power stations to gas, allowing the regime to maintain its oil export capacity at a time when domestic energy consumption was increasing sharply. In addition, phosphate mines near Palmyra provided the country with cheap fertilizer and a major source of income. 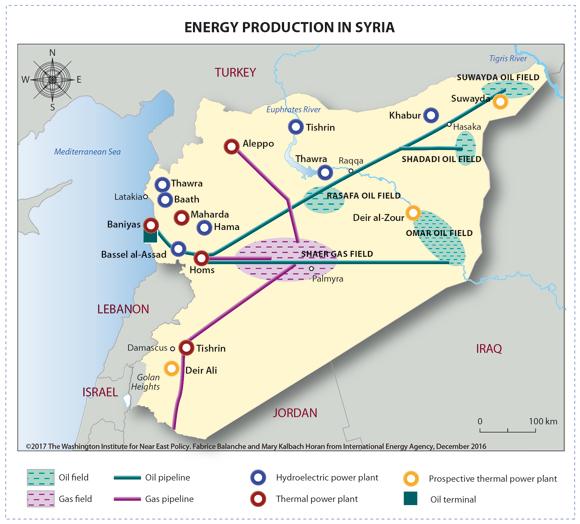 Much of the economic activity in Syria's western cities has been linked to the exploitation of resources in the east. Aleppo is the perfect example: when the northern metropolis lost its Anatolian hinterland after splitting from the Ottoman Empire in 1920, it had to build a new hinterland, so local entrepreneurs invested in industrial crops in the east. This helped them establish strong textile and agro-food industries in Aleppo.

Elsewhere, Hama has long specialized in livestock raised in the steppes around Deir al-Zour, the center of Syria's sheep market, most of which is exported to Persian Gulf countries. Likewise, the oil refinery and chemical plants in Homs are dependent on hydrocarbons and phosphate from the east. As for Damascus, the capital's bloated bureaucracy and business community are the first to benefit from the redistribution of revenue raised by exporting mineral and agricultural raw materials.

Despite their importance, the productive eastern regions have always been marginalized by the state. There are no refineries or power stations in the area; the government planned to build a station in Hasaka and another in Deir al-Zour before the war, but nothing was done. Few state-owned industries have emerged either, including in the textile and agro-food sectors. The eastern private sector also receives little in the way of investment. Even before the war, the region resembled an "internal colony," and any postwar efforts to rebuild industrial infrastructure destroyed by the fighting are unlikely to help the private sector much -- a problem exacerbated by the lack of personnel skilled in industrial initiatives and the prevalence of tribal interests. In short, the eastern industrial public sector serves the regime clientele in the west, and changing this pattern would be difficult.

Data from Syria's last reliable census (2004) highlighted just how underdeveloped the rest of the eastern economy is. At the time, some 40 percent of the region's working population was involved in agriculture, compared with 20 percent nationally. The rate of public employment, an indicator of proximity to the regime, was particularly low. Unsurprisingly, social indicators in the region were the lowest in Syria: 30 percent illiteracy compared to 15 percent nationally. Easterners were already behind the development curve before the Baath came to power in 1963, and they have benefited little from the regime's exploitation of their natural resources. Some might point to the massively expensive Euphrates Valley irrigation project as a counterexample, yet that initiative was intended more as a means of controlling the population than helping them economically, as seen in its very mixed results.

This raises the question: will the population of eastern Syria once again accept this degree of marginalization if Damascus is able to regain control there? Local Arab tribes and Kurds have become more accustomed to independence during the war, so they may have difficulty accepting orders from the capital and standing by while the state-owned petroleum, wheat, and cotton firms move back in, dominated by Alawite employees from western provinces. Yet if they want to process and export their raw materials, they must either kowtow to the regime or find another partner, since eastern Syria has no processing industries of its own. Although the Kurds control a third of Syria's oil, current logistical and diplomatic hurdles prevent them from exporting it via Turkey or the Kurdistan Regional Government in northern Iraq. As for cereals and cotton produced in Hasaka, merchants in the western provinces have made sure to maintain their ties with eastern producers in order to preserve their monopoly on exports, even paying transit taxes to the Islamic State (IS).

These economic ties show why Damascus still wants to reestablish its grip over eastern Syria. Likewise, they show that whoever does control the east will have significant leverage over the Assad regime.

Given the current geostrategic situation, Damascus can expect Iranian and Russian assistance once it shifts its military attention eastward. Tehran and Moscow are no doubt concerned that Kurds and Arab tribes in the Euphrates area will gain further autonomy once the IS "capital" of Raqqa falls, which would in turn encourage a greater U.S. presence in the area. Assad's allies seem to believe that Washington is using the anti-IS campaign as an excuse to precipitate Syria's partition. 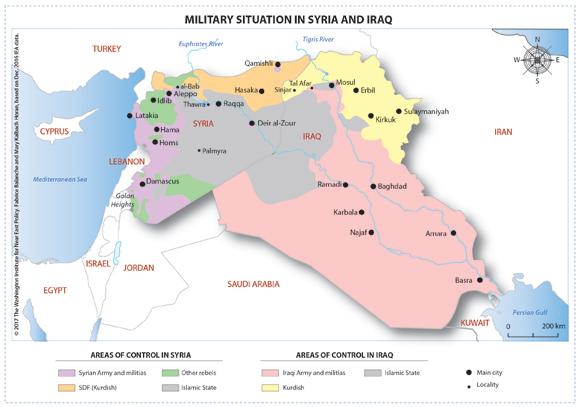 The prospect of dividing Syria in a manner that benefits the Kurds also worries Turkey. In Ankara's view, the main danger in Syria is no longer Assad or even the Islamic State, but the creation of a Syrian Kurdistan led by the Democratic Union Party, or PYD (though the ongoing string of horrific IS terrorist attacks in Turkish cities could change that calculus).

For Tehran's part, one indicator of its willingness to help Assad reconquer IS territory is the fact that Iranian-sponsored Shiite militias west of Mosul, Iraq, have seized Tal Afar and are progressing toward the Syrian border. Iran's leaders are keen on preventing any Sunni Arab entity allied with the Gulf and the West from building a presence in these areas.

To be sure, the Syrian Kurds are useful to Assad in certain ways, partly because they help keep the opposition divided, and also because they serve as a logistical platform for training the largely Sunni Arab tribes of the Euphrates Valley to fight IS. But should they or the forces they train become too powerful, they will become a threat to his Alawite regime. The Kurds cannot occupy the Euphrates because of their mutual animosity with local Arab tribes, but the tribes themselves could pose a problem if Raqqa falls and Western countries begin directing more support their way via Kurdish territory. To prevent this scenario, Damascus, Tehran, and Moscow are seemingly awaiting a wider confrontation between the Kurds and Turkey. Rising tensions in Turkey's Kurdish southeastern region, coupled with Moscow's laissez-faire attitude toward Ankara's actions against Syrian Kurds, could break the fragile modus vivendi secured by Washington after Turkey intervened in Syria last August.

If the liberation of Raqqa is delayed or aborted, then Moscow, Damascus, and Tehran would likely delight in the resultant chaos across northeastern Syria, and would gladly step in to restore order if the West proves unwilling. The possibility of the Syrian army returning to the Euphrates Valley remains open, as evident in the regime's willingness to keep sending elite troops and other support to the long-encircled city of Deir al-Zour at a time when they would be more useful in reconquering "useful Syria." The regime's obstinacy in Deir al-Zour is not just an example of its dogma of maintaining a presence in all provincial capitals at all costs -- it is also a likely first step in its strategy of retaking the entire country, and its foreign partners seem ready to support such efforts.

The question is when? The answer depends on when the regime is able to bear the cost and summon the necessary manpower. That timeline can probably be measured in years, not months, especially since the regime seems to be eyeing the eastern province of Idlib first. Yet Jean de Lafontaine once said that "patience and length of time do more than strength or rage," and for Assad, the former does not preclude the latter.

At the same time, these factors indicate that the United States and its allies could wield strong leverage on Damascus if they or their proxies manage to gain control over key portions of eastern Syria. This presumably means bolstering their presence and activities in the Kurdish north first, perhaps by establishing safe areas or no-fly zones there. Although the timetable for major regime action in the east may be a long one, Assad clearly needs these areas in order to rebuild the country in a way that keeps the Syrian people dependent on him rather than international help.

Brief Analysis
Iran’s Military Establishment Doubles Down on “Revolution”
May 5, 2021
◆

Arab and Islamic Politics Energy and Economics Military and Security