James G. Lindsay is a visiting fellow at The Washington Institute, focusing on Palestinian refugee issues and UN humanitarian assistance. During 2000-2007, he served with the UN Relief and Works Agency (UNRWA), which carries out relief and public works projects for Palestinian refugees in the Near East. From 2002, Mr. Lindsay, as legal advisor and general counsel, oversaw all UNRWA legal activities, from aid contracts to relations with Israel, Jordan, Syria, Lebanon, and the Palestinian Authority.

Mr. Lindsay spent twenty years as an attorney in the Criminal Division of the U.S. Department of Justice, with assignments in the Internal Security, Appellate and Asset Forfeiture Sections, as well as in the Washington, DC and Miami United States Attorney's offices. For eight years, from 1985 to 1994, he was seconded to the Multinational Force and Observers in Sinai, serving as the force counsel for legal and treaty affairs. In 2000 he took early retirement from the Department of Justice to join UNRWA in Gaza. 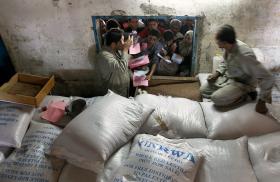